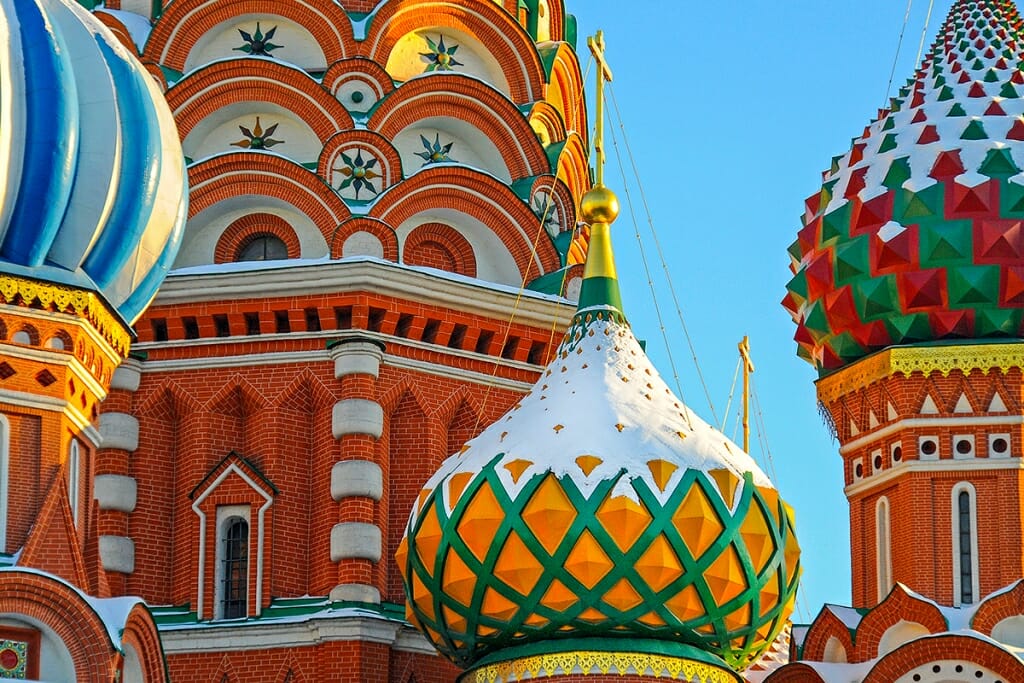 Moscow is considered to be one of the most expensive cities in the world, but thankfully you don’t have to be a Rockefeller to explore the city and to see some of its most iconic sites. All you have to do is take a walk. And even if all you have is 48 hours in Moscow, this itinerary will give you a good introduction to the city. And if you have more time, say four days in Moscow, you can visit the Bolshoi theatre, an art gallery or some of the city’s famous parks.

When I visited Moscow after living abroad for 20 years, the city was a different place to the one I left in the 90s. So, I was exploring Moscow as a foreign visitor with the benefit of local knowledge.

Here is the self-guided walking itinerary I followed to re-familiarize myself with the city.

Start your exploration on the Old Arbat Street. To get to the beginning of the street you need to take Metro (subway) to Smolenskaya station. The station, and most of Moscow metro, look like a museum exhibit and provides a perfect start to our “Historic Moscow” walk.

Once you emerge from the station veer left and you are on Arbat. As the name suggests, the Old Arbat Street is one of the oldest streets in Moscow. This cobbled thoroughfare adorned with multi-coloured facades of historic buildings, old-style street lamps and a multitude of souvenir stalls is a favourite walking place of Muscovites and tourists alike.

At the start of the street, there is a lovely turquoise mansion with a bronze statue at the front depicting Russia’s most famous poet Alexander Pushkin and his beautiful wife Natalia Goncharova. The newly-wed couple indeed lived on Arbat for a few months after they got married. Until Pushkin gambled away a substantial part of the family’s fortune and the couple had to return to St Petersburg.

Further down the street, there is a more modern installation – a graffiti-covered wall commemorating Victor Tsoi – a Soviet rock musician who died in a car accident. The wall started as a single inscription on 15 August 1990: “Victor Tsoi died today” and later many more inscriptions have been added.

Cathedral of Christ the Savior

At the end of the Old Arbat Street you have two choices: continue straight ahead to the Red Square or turn right onto Gogolevskiy Blvd for a detour to the Cathedral of Christ the Saviour.

The Cathedral has a colourful history. The original Cathedral of Christ the Savior was built in this spot in 1883 to commemorate Russia’s victory over Napoleon.

In 1931 the communist government demolished the Cathedral and 30 years later replaced it with a gigantic swimming pool – the pride and joy of the USSR.

The fall of communism signified the new era in Russia and the swimming pool was demolished to re-built the Cathedral. The current building was finished in 1997.

In modern history, the Cathedral drew international attention as the site of the controversial performance and consequent arrest of the balaclava-clad members of the punk group Pussy Riot in 2012.

To reach the cathedral follow Gogolevskiy Blvd towards the Moscow River until you see its golden domes and white facade. The cathedral can be visited for free providing you are properly dressed.

By now you will probably be quite tired of all the walking and the good news is, the best piroshki (pies) in Moscow are sold from a small stand right behind the cathedral, at the beginning of the Patriarchy Bridge. There are a few benches around and you can easily find a quiet spot to sit down and enjoy the views of the Moscow River and the old city around it.

Having rested, start following the river along Prechistenskaya Naberezhnaya (embankment walk) towards the Red Square until you reach Bolshoy Kamennyi Bridge. Once there, walk under the bridge, cross the road, turn left and follow the red Kremlin wall to the entrance into Manezhnaya Square. And here you are – at the iconic Red Square – the historic heart of Moscow.

There are lots of things to do at Red Square. You can check out Saint Basil’s Cathedral commissioned by Ivan the Terrible, see Lenin’s body in the mausoleum, have an exceptionally overpriced cup of coffee and absorb the spectacular views.

The State Department Store, GUM, located right here at the Red Square provides a glimpse at the luxurious side of Moscow. The building, complete with architecturally stunning hallways, arched ceiling, and indoor fountains houses some of the most expensive brands in the world. The majority of the Moscow population views GUM  as more of a museum rather than an actual department store.

A fitting end to the day’s explorations would be a short walk down Varvarka Street – the oldest street in Moscow. The first mention of the street dates back to the XIV Century when victorious Dmitry Donskoy rode into Moscow after defeating the Golden Horde at the Battle of Kulikovo (1380). Dmitry Donskoy was one of the most accomplished Moscow princes – the first white-walled Kremlin was also built during his reign.

Varvarka Street is also famous for housing more churches than any other street in the capital. But it is not all churches of course. At the beginning of the street (Varvarka, 4) is one of the oldest secular buildings in Moscow – the Old English Embassy. It was presented to a group of English merchants in 1553 by Ivan the Terrible – the first all-Russian Tsar. During his reign, the Russian empire was borne out of a collection of medieval states.

Palace of the Romanoff Boyars

A few meters down the street is another historic building – the Palace of the Romanoff Boyars, built in XVI-XVII Centuries. Even before their rise to the throne in 1613, Romanoff have long been prominent Moscow aristocrats and this area was their domain. The family fortunes first soared when the family founders’ daughter Anastasia married the Tsar of the Rurik dynasty – Ivan the Terrible in 1547. Currently, the building houses a museum dedicated to the lifestyle of Moscow’s medieval nobility.

Here is a link to Google Map of Day 1 Walk

Some of the lines naturally intersect in the middle and you may only need to change trains once, instead of going via the inner circle line. Here is the link to the Map of Moscow Metro

Day 2 – Under the radar Moscow

Having visited a fair share of ‘must-see’ landmarks on the first day you can now go off the beaten track and explore places that most foreign visitors to Moscow miss. One such place is a former Soviet secret military facility, Bunker 42, located in an underground bunker below the streets of the capital. It is not a free experience, but it is well worth the $20 entry fee.

Underground bunkers are among the world’s most fascinating structures and they are usually off-limits to the general public. Think Cheyenne Mountain nuclear bunker or Svalbard Global Seed Vault in Norway. These structures are designed to withstand a nuclear blast and total annihilation of life on the surface.

Bunker 42, located near Taganskaya Metro station is a former Long-Range Aviation Command Post. It is located 65 meters underground, deeper than the Moscow Metro network, and requires walking down 36 flights of stairs down to level -18.

Above ground, the entrance to the bunker is protected by a faux building that is completely hollow inside, though during the time the bunker was operational the lights and radio were turned on inside to maintain the illusion of an occupied residential building.

To continue on the theme of Stalin’s Russia, take Metro to Mayakovskaya station and walk down Bolshaya Sadovaya Street to Patriarch Ponds. This small city park surrounded by Stalin-era apartment blocks is the famous location for the opening scenes in Bulgakov’s novel Master and Margarita.

The novel, that is centred around a visit by Satan to the fervently atheistic Soviet Union is considered by many critics to be one of the best novels of the 20th century. Everyone who read the book should visit Patriarch Ponds and those who haven’t could take this opportunity and read a few first pages. And make sure not to miss the sculpture garden based on the characters from the famous fables of Ivan Krylov.

Not far from Patriarch Ponds, back towards the Metro along Bolshaya Sadovaya Street is another corner of Bulgakov’s legacy – the house where the writer lived in the infamous flat No 50 prominently portrayed in the book. In the forecourt of the building, there is a bronze statue of the two characters from Master and Margarita – Korov’ev and Behemoth, the talking cat.

The flat itself is located on the top level of the building and can be reached via three flights of stairs. The walls of the stairwell are covered with patches of graffiti left by the fans of the book. Bulgakov wrote a number of novels, though Master and Margarita is most loved by the Russians.

The last echo from Bulgakov’s era can be found a block up the street towards the Metro. It is the court of the Mossovet Theatre on Bolshaya Sadovaya Street. The entire forecourt, in fact, brings to mind images of Massolit, the society of writers and literary administrators thrown into chaos by Satan’s visit to Moscow in Bulgakov’s novel.

The garden in the court is known as Aquarium and its center point is the Satire fountain, with Satire depicted as a devilish figure. The garden has the same tranquil air to it as Patriarch Ponds and features an adorable open-air cafe.

From here you can take a walk down the well-known Tverskaya Street towards the Red Square. Turn left on Kamergerskiy lane, right onto Bolshaya Dmitrovka street and left to Kop’yevskiy lane and walk past the Bolshoi Theater to Lubyanka – former KGB headquarters.

Here is the link to Google Map of Day 2 Walk

To me, these explorations were about rediscovering the city I already knew. But for something different, check out this excellent post for the traveller’s perspective on how Russia has changed since the fall of communism.