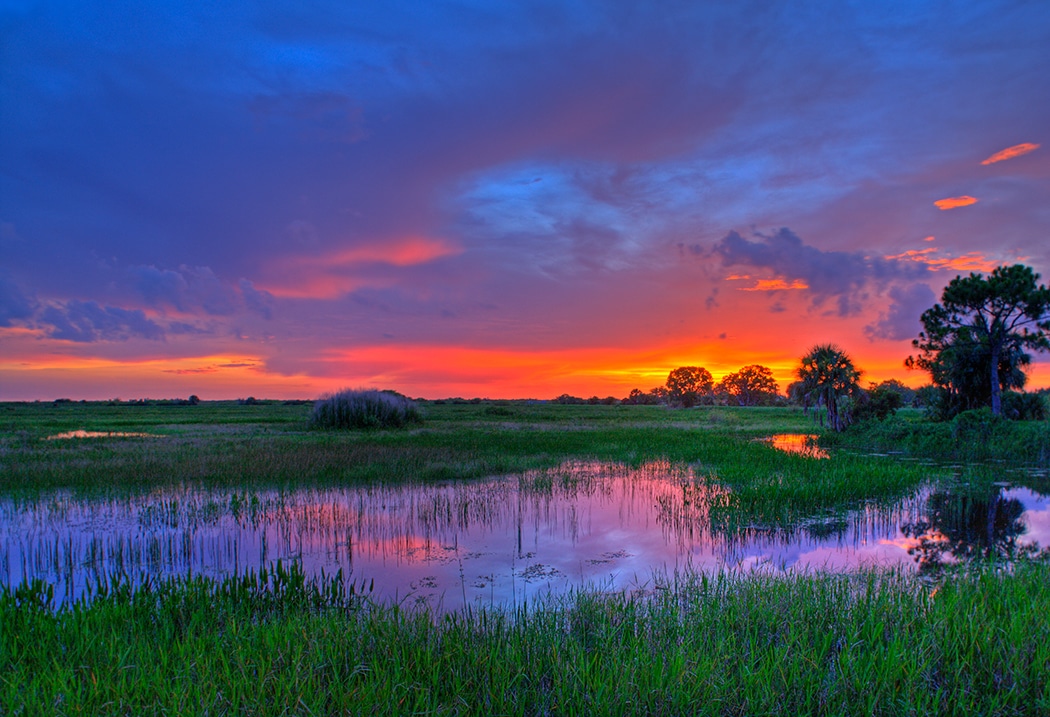 Before you plan your Sunshine State itinerary, check out these stunning National Parks in Florida that you have to visit if you enjoy nature and wildlife.

Florida might be a beloved destination for Miami nightlife or Orlando theme parks (and Manatees!), but they don’t call it the Sunshine State for nothing. There is really no better place to soak up the sun and explore the natural beauty of Florida’s diverse ecosystems.

In fact, there are a whopping 11 National Parks in Florida, each one home to natural scenery, historical monuments, or both.

And there is much more to Florida’s wildlife than “snowbirds” who spend their winters in Florida retirement communities. Much of the state preserves the habitats of diverse wildlife populations.

National Parks are some of the best places to find everything from black bears to panthers and sharks to sea turtles. Pelicans, manatees, alligators, and dolphins are some of the most exciting animals to spot throughout Florida.

It’s so easy to get around Florida, too, so a National Park tour of the Sunshine State is a no-brainer. You can fly into any of the major airports in Miami, Orlando, Fort Lauderdale, Jacksonville, and Tampa, and continue on via train, bus, or car. Amtrak trains reach most major cities in Florida, and buses in the U.S. travel from cities to quieter areas, some even to the entrances of National Parks themselves.

Ready to start an outdoor adventure in the Florida sunshine? Looking for things to do in Miami? Here is a brief introduction to Florida’s National Parks.

How many National Parks are in Florida?

Which National Parks in Florida can you drive to?

You can drive to most Florida National Parks, however, Dry Tortugas and much of Biscayne National Park are only accessible by boat. You can technically drive to Everglades National Park, but the best views come from boat rides through the marshlands. Canaveral National Seashore is best explored on foot, at least to feel the sand in your toes a bit.

Which National Parks in Florida can you take the bus to?

If you’re going the sustainable route and forgoing a car, there are several buses that have service to cities near National Parks. Between a bus trip, local transit, and short walks, the following National Parks are easy to reach without a car: Biscayne, Everglades, Big Cypress, Fort De Soto, Canaveral, Fort Caroline, Timucuan, Fort Matanzas, and Castillo de San Marcos. Search on Wanderu to find all the bus options that arrive near the Park you’re visiting.

What is the biggest National Park in Florida?

Which is the least-visited National Park?

Dry Tortugas National Park is one of the more remote places that you can explore in the United States. Comprising seven islands west of the Florida Keys, the park is difficult to reach but so worth it for the few who make the trip.

Biscayne National Park is one of the most unique parks in the entire NPS system, simply because almost the entire Park is underwater! The natural preserve protects coral reefs, islands, and shorelines in Biscayne Bay off the coast of Miami.

The best way to get around the park is on a boat tour, whether it’s one focused on the area’s history, one where you’ll learn to scuba dive or one where you’ll paddle your own kayak through lagoons filled with marine life.

You can hike or camp in some of the Park’s keys (a.k.a. islands), or embrace the unique offerings like the completely underwater Maritime Heritage Trail, where you’ll snorkel above six sunken shipwrecks.

No matter your Biscayne itinerary, you’ll have the opportunity to get up close and personal with South Florida creatures like the 600 fish species native to the area, endangered sea turtles, manatees, and the various birds that make Biscayne a birdwatchers’ paradise. Don’t leave your binoculars at home!

One of the more recognizable National Parks in the state, Everglades is made up of mangroves, marshes, and flatwoods at the southern tip of Florida. Only an hour’s drive from Miami, the Everglades are home to endangered species like the American alligator, West Indian Manatee, and Florida panthers.

The best way to experience the Everglades is on an airboat ride through the grassy marshes. You can also opt for a canoe, kayak, or hiking tour, but really, all of the action is on the water. Keep your eyes peeled, you may even see fish that fly!

The best time to visit the Everglades is in the winter, between December and March. You’ll have less heat and humidity to worry about, and there will be fewer mosquitoes to bother you.

If you are short on time, you can visit the Everglades on a day tour from Miami. There is the classic Everglades Nature Tour if you want to spend the day in the national park. Or, if you are serious about wildlife watching, there is a Biologist-led Tour that includes a cruise, a hike, and an air-boat ride.

And if you are staying in Orlando, you can even combine a visit to the Everglades with a swim with Manatees at Crystal River.

Dry Tortugas is made up of seven small islands that offer some of the best snorkeling and diving in the United States.

In fact, only 1% of this National Park is made up of dry land, so be prepared to get wet! You might think “Dry Tortugas” is a misleading name, but this was historically a useful bit of information for sailors to communicate to other seamen that the islands lack fresh water.

When you’re ready to actually dry off, take a tour of Fort Jefferson, a massive fort that covers most of Garden Key. Even if military history isn’t your thing, this central location hosts the purest white sand for sunbathing, the clearest crystal blue water for snorkeling, and some of the best viewpoints to see dolphins surfacing in the sea.

The 100 square miles that make up Dry Tortugas National Park is only accessible by boat or seaplane, so be sure to plan your trip accordingly. Of course, the trip there is half the adventure!

You can also visit Dry Tortugas on an epic 10-hour tour from Key West.

Your first stop should be the Oasis Visitor Center, where you can chat with rangers and stand on a wide boardwalk that’s perfectly positioned for alligator sightings.

If you want to take your hiking to the next level, try a swamp walk at Big Cypress. Since most of the preserve is marshy, trails are often flooded with knee-deep water. You’ll slip through mud, duck under branches, and get fully immersed in the environment. You can either set out on your own swamp walk or join ones led by naturalists. Either way, you’re sure to spot egrets, herons, and other wading birds along the way.

The Big Cypress area is even one of the few Dark Sky Sites in the Eastern U.S., which means you’ll have prime stargazing opportunities when the day is done.

If you are staying in Fort Myers/Naples Area, you can explore the Big Cypress on Everglades Day Safari.

Unspoiled, undeveloped, unbelievable. Canaveral National Seashore is a 24-mile stretch of shoreline on a barrier island between ​​New Smyrna Beach and Titusville on the Atlantic Coast.

Although Florida has its fair share of beaches, Canaveral National Seashore is a miraculous ecosystem of animals that live in its lagoons, hammocks, and dunes, all protected from development.

The National Seashore also preserves an ancient mound created by the ancient indigenous Timucuan people. You can climb up Turtle Mound on gentle ramps, and gain gorgeous views of Mosquito Lagoon and the ocean from the top.

Visit Apollo or Playalinda Beaches on the seashore for the most pristine sands and ocean, and look out for sea turtles nesting, terns along the tide lines, and bald eagles soaring through the air. Fish, swim, boat, or camp in this serene area to get a sense of what Florida might have looked like hundreds of years ago.

Also located on the Atlantic side of the state of Florida, the Timucuan Ecological & Historic Preserve is an excellent spot to experience what makes up true and unspoiled wetlands.

Wander through the nearly 6,000 years of human history, beginning with the Timucua tribe, see the salt marshes which serve as an estuary to many fish, mammals, and birds, and wander through the 16th Century Fort exhibit that recounts the early times of French colonists.

In the northern part of the state, you can treat yourself to more southern-style vegetation like Palmetto trees and even some live oaks. Among them, keep your eyes peeled for the beautiful butterflies and dragonflies sprinkled throughout the area – if you are keeping count, there are nearly 150 types!

Now that you know some of the best parks and preserves that Florida has to offer, what are you waiting for? This bucket list of Florida National Parks is sure to lead you to the most amazing adventures in a state whose appeal goes far beyond Mickey Mouse.

More Nature Adventures in the US