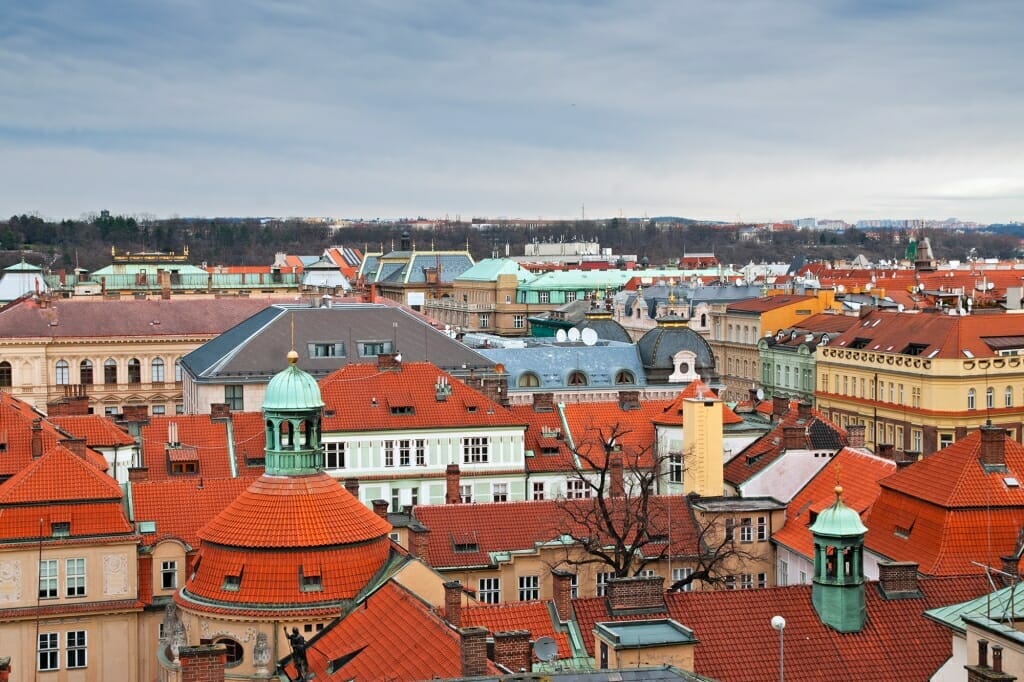 Last January, I had to travel to Moscow for what will probably become my last ever trip home and to make things a little bit more interesting, I decided to spend a weekend in Prague. I would have preferred to have at least 3 days to explore Prague, but a weekend was the best I could do, so I tried to concentrate on the city’s historical center and see as much of it as I could.

Prague is, no doubt, one of the prettiest and easily explored cities in Europe. Its epic history has produced a vibrant city of stunning buildings and charming streets in a curious mix of architectural styles.

The combined areas of the Old town, the Prague Castle and the Lesser Town add up to an impressively large ‘medieval city’ where everything is still within walking distance of everything else.

But, because it is so beautiful, Prague is one of the busiest cities in Europe. In the middle of the day the crowds in the older parts of town are so thick that you can’t see the buildings behind them. I discovered the secret to having Prague virtually to yourself by accident. My body clock didn’t have the time to adjust from Australian time to European and I was waking up before dawn. And at 5am or even 6am you can literally have the city to yourself.

I walked across Charles bridge and haven’t met another soul. I wondered the streets of Old Town and Lesser Town all by myself. It wasn’t even intentional, I naturally woke up very early. But when my friends looked at my photos when I returned home, they did ask if there was anyone else in the city while I was there. So if you want to see old Prague without modern tourism intrusions, get up at the crack of dawn and go exploring!

And here is a handy travel guide to Prague for your first visit to one of Europe’s prettiest cities. All you need to know to get your bearings and start exploring.

This old city is so beautiful, so neat and so uniformly free of modern intrusions, that it feels like a period film set rather than a living, breathing metropolis. It is a city that has been preserved in its entirety as a unique piece of art. Unfortunately, during the peak times of the day, when most of the tourists are out on the streets, it starts to feel like an amusement park.

Tip: A less crowded alternative to Prague is Cesky Krumlov, a town in the south Bohemia that has been described as mini-Prague. Here is a helpful guide to Cesky Krumlov.

I rented an apartment in the Old Town on Jilska Street, a mere 2-minute stroll from the Astronomical Clock. Or so I thought. In reality, the streets of the Old Town are a confusing maze of twists and turns, seemingly designed for the single purpose of getting people lost. Or maybe people had a better sense of direction in the early XIII century.

Since I had very little time in Prague, I decided not to try to see everything, but to stroll along the city streets and explore as I went along.

The Astronomical Clock – perhaps Prague’s most iconic landmark is a curious structure. Not so much because of the procession of the 12 apostles that was considered one of the wonders of the world in the Middle Ages, but because of the dials that represent the most ‘cutting edge’ understanding of time and universe at the time the clock was built – 606 years ago.

Talking about time and universe, an interesting place to have dinner in the Old Town is Café Louvre . Not only is it a century old, it also used to be one of Einstein’s favourite coffee spots during his professorship at Prague University.

It’s best to start explorations of Prague at dawn when the streets are largely empty and it is possible to have the city to yourself. As an added bonus, watching the sunrise over the domes and spires of the old city adds an element of romance to the day. The only possible downside to an early start in winter is the frosty temperature (more on visiting Prague in winter). Thankfully, drinking of hot wine is encouraged in Prague from about 9 am onward.

Charles Bridge or Karlov Most

Charles Bridge is almost deserted at dawn and looks probably not much different to what it looked like for the last 900 years. I have a bit of thing for all sorts of repeating numbers and I found it interesting that the construction of the bridge was started at precisely 5.31am on 9 July 1357, by Charles IV himself laying down the first foundation stone.

The date and time are known so precisely because they represent a palindromic number  (reading the same in either direction) 135797531 that was meticulously calculated by the royal astrologists and numerologist as the best time for starting the bridge construction. Seems like it was a good call, given that the bridge is still standing today.

The Lesser town on the other side of Charles Bridge is the most historic spot in Prague, having been settled in the 8th century. It is packed with little shops and restaurants nestled between grand embassies and castle-like estates.

Nerudova Street that leads all the way up to Prague Castle has retained its Baroque appearance and most of the houses still bear their signs that were used as ‘addresses’ before house numbers were introduced.

According to Time magazine, Prague Castle is roughly the size of 7 (!!) football fields, which makes it one of the biggest ancient castles in the world. I am not sure how many football fields are supposed to fit in an average medieval castle, but Prague Castle is immense. It contains churches, gardens, alleyways, royal residences, torture chambers and tradesmen quarters.

Turning up early in the day has its advantages here too. I’ve managed to escape into the depths of the complex just as the loudly excited groups of Asian tourists started to arrive, thrusting their selfie sticks like multi-colored rapiers at unsuspecting passers-by.

The most imposing structure at the complex is the Gothic St. Vitus Cathedral, which took six centuries to build. Its tremendously high ceiling, no doubt designed to make one feel small and insignificant, does not fall short of its mark.

The centrepiece in the cathedral is the silver tomb of St. John of Nepomuk — the same St. John who was thrown off Charles Bridge at the behest of Bohemian King Wenceslaus and who was later made a saint. Rumour has it, that John of Nepomuk was the confessor of the queen and refused to betray her confidence.

Of all the streets in the Castle, the Golden Lane is the most picturesque.  The tiny multicoloured houses, while freezing inside, look incredibly cozy from the outside. The interiors of the houses look quite similar to what you would see in a traditional Russian farmhouse even now. In fact, I could’ve sworn, I saw my grandma’s foot-operated sewing machine there.

The castle wall near the Gold Lane is a good spot to see some panoramic views of the city. The castle is perched on a hilltop and has some of the best views in Prague.

The most picturesque way to leave the Castle is via Old Castle Stairs. It is such a quaint spot, you can just see Daenerys Targaryen strutting down these steps.

Across the river from the castle, there is another good vantage point – the Old Town Bridge Tower. It takes a bit of determination to climb all the way to the top, but the views are certainly worth it.

On one side, you get a sweeping view over Vltava River and Lesser Town with the commanding gothic spires of Prague Castle rising above the uniformly orange rooftops.

On the opposite side, you are looking down at the intricate details of the Old Town rooftops. It is amazing how much thought and effort they put into decorating the rooftops in old Prague. Particularly, considering that you can only see all this beauty from the few watchtowers.

Another good vantage point is the top of the Old Town Hall tower in the center of the Old Town. Here you don’t even have to climb the steps to the top. Instead, you have to wait in a queue for the futuristic-looking elevator.

It is a slightly more controlled experience, but the views are certainly worth it. Especially the sight of the twin gothic towers of Tyn Church, where the famed Danish astronomer, Tycho Brahe, is buried.

On Sunday morning the bridge was even more deserted than the day before. Apart from a few local joggers, there were no people to be seen. The empty city felt like an abandoned medieval ghost town.

There is a spot marked on the bridge where St John Nepomuk was thrown into the Vltava River. It is believed that touching the cross marking the spot will bring good luck. Seems a bit ironic, seeing how St John himself wasn’t all that lucky after all.

A short walk up the hill from Prague Castle through the quiet neighbourhoods of  Uvoz Street is another medieval complex – the XII century Strahov Monastery.

One of the most jaw-dropping sites in Prague is the library housed in this monastery. The 800 years old Strahov library is split between two halls:  Theological and Philosophical. Both rooms are filled with rows upon rows of antique books and decorated with such beautiful ceilings that Michelangelo would’ve been proud of such work.  The combination of ancient knowledge and the spectacular beauty of the rooms creates an awe-inspiring site.

The monastery is surrounded by a tranquil park that offers good views of the Lesser town and Vltava River. There are also plenty of cozy cafes nearby where you can experience Prague lifestyle without the crowds.

A short stroll from the monastery, behind Loreta church is Prague’s most romantic little street -Novi Svet. It feels completely untouched by time. It is only a very short street, but absolutely worth the visit if you are in the area.

Perhaps the most unexpected element in Old Prague is the John Lennon wall in Lesser Town. It adds a modern art element to the mix of architectural styles comprising the old city.

Check out this handy guide for more ideas about things to do in the historic center of Prague.

A bit of bird watching in Prague

A bit of bird watching by the river: Mute swans, Mallard ducks and hundreds of Black-headed gulls.  With the only addition of Great tits, European robin, Common blackbird and European magpie on Uvoz Street, this was the entirety of my wildlife watching on this trip.

Two days of walking is nowhere near enough to explore old Prague properly, even if you start walking at dawn. I didn’t have the time to check out the Dancing house, Vyšehrad fort or the Jewish quarter. But I did make sure to see at least one synagogue on the way to the train station – the ornate Jerusalem Synagogue.

Prague is very easy to explore on your own, by simply walking its cobbled streets. But if you would like to learn more about the city, its culture and history, it is always a good idea to take one guided tour during your stay. One of the most interesting tours available in Prague is the Prague Castle after Dark tour. Its an organized alternative to wondering the streets on your own at dawn.