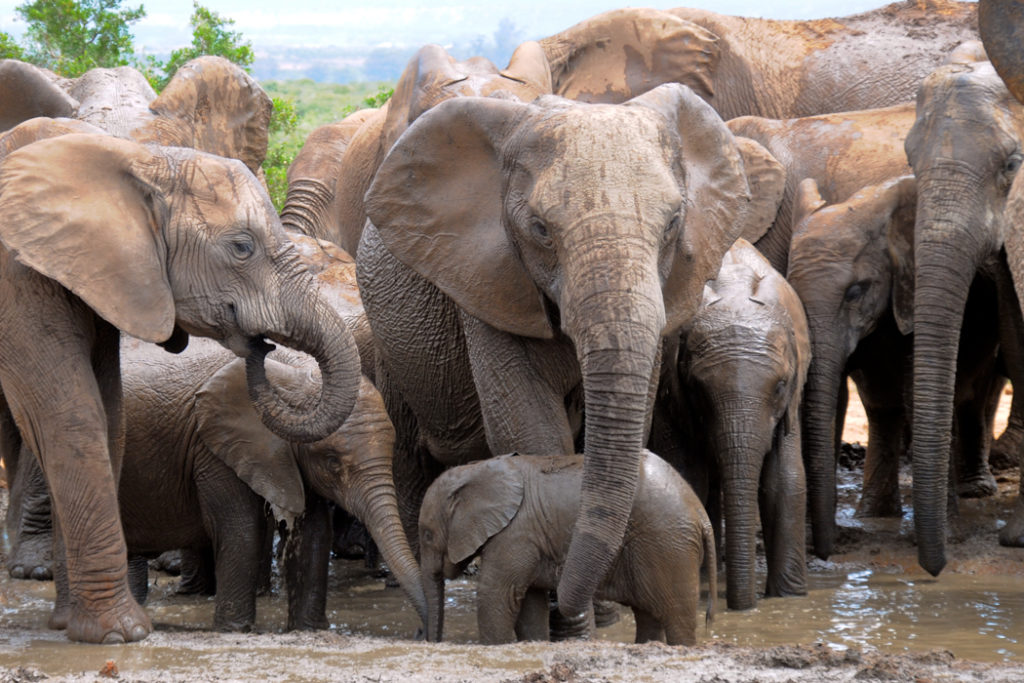 We visited the park as part of the Garden Route itinerary and spent two days exploring the park independently. Addo is very well set up for a self-drive safari. The main entrance and the two looped roads are sealed and the smaller tracks are gravelled. You can easily explore the park in a 2WD vehicle.

In recent years, the park has been expanded from its original 1,640 km² to include two additional reserves: Woody Cape Nature Reserve and St. Croix Island and Bird Island. The marine Bird Island reserve is home to the world’s largest breeding colony of gannets, a colony of penguins and a variety of other marine life, including the Great White shark.

The management of the park was concentrated on increasing populations of the megafauna and today, the park is home to over 600 elephants, 400 Cape buffaloes, more than 48 endangered black rhinos and a variety of antelope species like the magnificent Kudu.

Lion and Spotted hyena have also been re-introduced to the park. We spotted a hyena on a night drive.

On the opposite end of the size scale is the flightless dung beetle. Addo is home to the larges population of these tiny hard-working creatures and as the road signs announce, the beetles have right of way.

The addition of marine reserves increased the size of the park to a whopping 3,600 km², making Addo the third largest national park in South Africa after Kruger National Park and the Kgalagadi Transfrontier Park. And the only park in the world to contain Africa’s Big 7: Elephant, Rhinoceros, Lion, Buffalo, Leopard, Whale and Great White shark.

We entered the park through the south gate and within minutes of arriving started seeing wildlife. A Secretarybird was strutting in the tall grass, a pair of Leopard tortoises crossed the road, Warthogs snoozed in the shade and Addo’s famous dung beetles labored along the sides of the road pushing along large balls of dung.

The southern part of the park is quite bushy, but we easily spotted a Red Hartebeast, a Bushbuck, a great old Buffalo and a herd of Zebra on the far horizon. The dense vegetation in this part of the park meant that all the animal sightings we had were at a very close range, much closer than in the more open environment of say, Kruger National Park.

As the name suggests, Addo Elephant National Park self-drive safari is all about the Elephants. The first herd we saw was a bachelor herd cooling off at the waterhole. As we watched the silent giants, a small Warthog that did not seem to have any sense of self-preservation approached the herd and plunged into the muddy water right in front of the elephants. He splashed around for a while and left quite satisfied with his bathing experience.

Next, we saw a huge herd of females and calves at another waterhole. Addo is truly the land of the elephants. They can be found anywhere in the park at any time of the day. You could easily spend the entire day at the specially-constructed hide by the waterhole, watching the elephant families interact and tend to their young. Being so close to these amazing creatures is an unforgettable experience.

Other abundant animals at the park are Kudu, Ostrich and Black-backed jackal.  The best jackal sighting we had was of a single male walking purposefully along the path in the bush towards the road. He came practically right up to the car and was completely unperturbed.

Other wildlife of Addo Elephant Park

Of the less common creatures, we spotted a family of Meerkats and a single male Spotted Hyena on the night drive.  The night drive, however, was quite disappointing as it started raining just as we set off and rained through the entire drive. The only other animals we spotted were a Porcupine, a few Scrub hares, and an Olive toad.

Overnight we stayed at Addo Rest Camp in a Forest Cabin, which was perfectly comfortable. But if you are looking for more creature comforts, there are several luxury lodges in the park.

Check out this guide for the costs of travelling in South Africa to help you plan your budget.

The second day in Addo was even more amazing than the first. We did not see as many different species, but we were able to observe animal families as they went about their day.  Late in the afternoon, we came across a family of Black-backed jackals relaxing in the grass. Well, the two adults were relaxing, but their four pups were tirelessly chasing each other and anything else that moved around them.

While watching the jackals I noticed a family of Yellow mongooses scanning the ground near the entrance to their burrow on the other side of the road. We spent most of the afternoon alternating between watching jackal and mongoose families.

All in all, Addo Elephant National Park self-drive safari was one of our most enjoyable wildlife experiences in South Africa. The park was not crowded, unlike the more popular Kruger National Park and wildlife viewing felt more natural and rewarding at Addo.

Addo Elephant National Park is located 812.4km (8.5 hr drive) via N1 from Cape Town. There are plenty of scenic detours along the way and the journey makes for one of the best road trips in South Africa. For more ideas about road trip destinations, check out this 3-week itinerary for South Africa.

The nearest city to Addo is Port Elizabeth. You can either base yourself in town and explore the park over a few days or you can stay at one of the lodges in the park. Try to book at least one night drive with the rangers while you are in Addo. Our night drive was uneventful, but even the chance to experience the magic of the African bush at night was entirely worth it.

Have you visited Addo Elephant Park? Do you have any tips to share with fellow wildlife watchers? Leave your tips in the comments below.