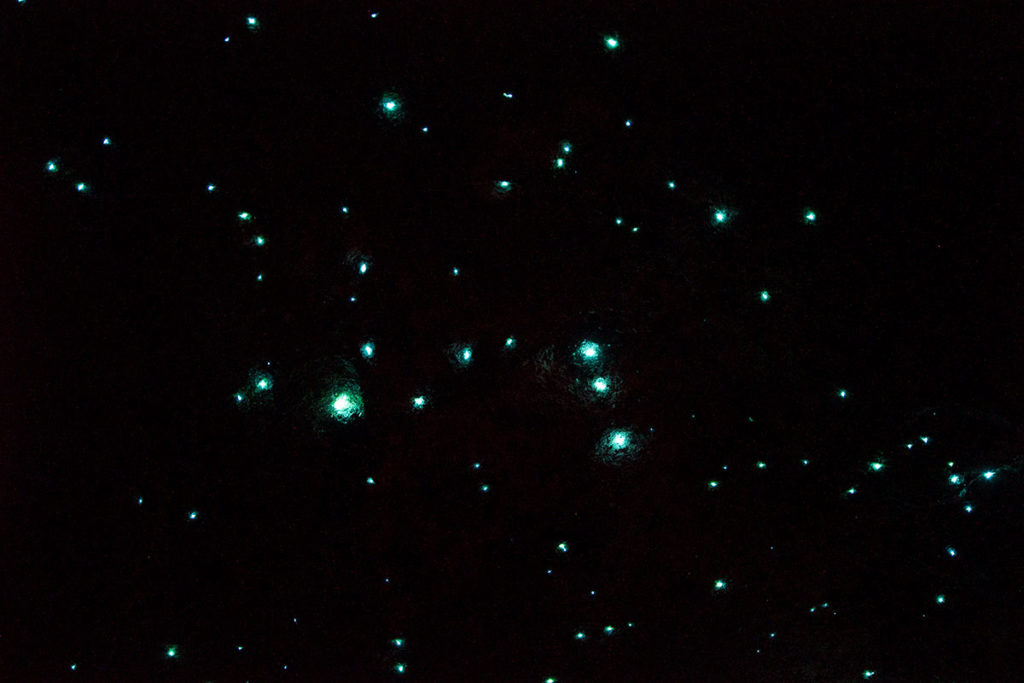 After seeing the mesmerizing glow worm spectacle at Horseshoe Falls in Hazelbrook, I wanted to explore more glow worm magic, so my friend Anu and I booked the Blue Mountains Glow Worm Tour by Night with WildScape Adventures.

We met Antoine at Parramatta train station at 7 pm and headed out into the night in his roomy 4WD. Typically, Antoine’s tours include a city pickup, but we managed to grab a promo deal that was a little cheaper, and so didn’t include the drive from the city. As local Sydneysiders, this suited us fine.

Anu and I were thrilled to discover that we were the only participants on this tour. The promo for the tour did mention a small group tour, but this was a private adventure!

Antoine was chatting as soon as we got into the car so within about 5 minutes it felt like we were going on an adventure with a very knowledgeable friend. I think I learned more about the Blue Mountains during our drive than I have in all my time of hiking there.

The adventure began when we got into the Devil’s Hole Creek Reserve in the lower Grose Valley. There’s nothing like driving down a forest dirt road in a 4WD at night to set up the anticipation of discovering something new.

The road was in a pretty good condition, Antoine remarked that it must’ve been graded recently, but even now, a 2WD might’ve struggled on the steep and sandy parts of the track. After the rain, it would become impassable for the smaller cars.

Soon, we arrived at a campground with a few campfires glowing in the darkness. We parked at the edge of the clearing and Antoine’s handed us our fancy headlamps that included a few different luminosity settings and most importantly a red light. That dim red glow is the only light you can use around glow worms without disturbing them.

We followed Antione down a forest path, crossed a creek over some logs and headed for the glow worm dell. The light from our headlamps snatched out charred tree trunks from the darkness. This area burned heavily during the 2020 fires and was closed for months afterwards. Even now the vegetation along the sides of the trail was much thinner than usual.

We walked past a convict-dug pit with perfectly straight walls, and a large rock overhang with fake ‘hands’, obviously someone’s a misplaced attempt at replicating Aboriginal cave art. Antoine pointed out some bush tucker; some of these plants I knew well, but would’ve never considered them as edible options.

After walking about 400 meters we stopped in the middle of the trail and turned off our headlamps. As we chatted, the forest around us began to glow with millions of blue-green lights. Glow worms were everywhere almost making a giant 360-degree circle around us. They live on humid rock walls, so we must’ve stood between sandstone walls of a small canyon. This wasn’t our main stop – the view of glow worms was obstructed by trees and shrubs but to find ourselves surrounded by them was a magical experience.

We could hear a waterfall nearby and this is where Antoine was taking us. An open space surrounded by sandstone walls with a waterfall concealed somewhere in the darkness and a creek running at our feet. The combination of moisture and warm temperature created perfect conditions for glow worms and there were thousands upon thousands of tiny lights clinging to every surface around us. It was like standing in the middle of a galaxy surrounded by billions of stars. Even the creek was twinkling with reflected lights.

Why do they shine?

What you are witnessing when looking at glow worms are predators in ambush. Much like spiders, glow worms produce little strings of silk. But unlike spiders’ webs, glow worm silk strings are just that – tiny strings suspended from a rock ledge. Each string is covered with tiny dollops of sticky mucous, which make them look like strings of beads. For flying insects, these beads are deadly.

And since glow worms strings are not arranged in vast webs, they have to entice their prey to come to them. And this is what their bioluminescent bums are for. To confuse the insects into thinking they’re flying towards a starry sky. You know how irresistible the lights are to nocturnal insects. Glow worms have found a way to use it to their advantage.

So, the next time you find yourself mesmerized by a colony of glow worms putting on a magical show of light in the dark cave or forest, remember, it’s a death trap.

The colony at Devil’s Hole Creek Reserve must be the biggest in the Blue Mountains. It is far more impressive than the one at Horseshoe Falls in Hazelbrook and it offers much better viewing than Lithgow Glow Worm Tunnel.

Some glow worm sights are easier to visit than others. The Hazelbrook site, for example, is very easy to visit independently, as I have. You can read my guide to watching glow worms at Horseshoe Falls in Hazelbrook here.

The site at Devil’s Hole Creek Reserve is not the easiest one to visit, it’s quite remote and requires a 4WD. It may be possible to drive this road in a 2WD on a good day, but it would be risky. And it’s a really inconvenient place to get stuck!

I would highly recommend booking Antoine’s Blue Mountains Glow Worm Tour. This way, you don’t have to worry about the logistics of getting there or finding the trail in the dark.

If you have any tips or suggestions for glow worm sites around Sydney, share them in the comments below.

More things to do in the Blue Mountains

How to explore the Blue Mountains by train