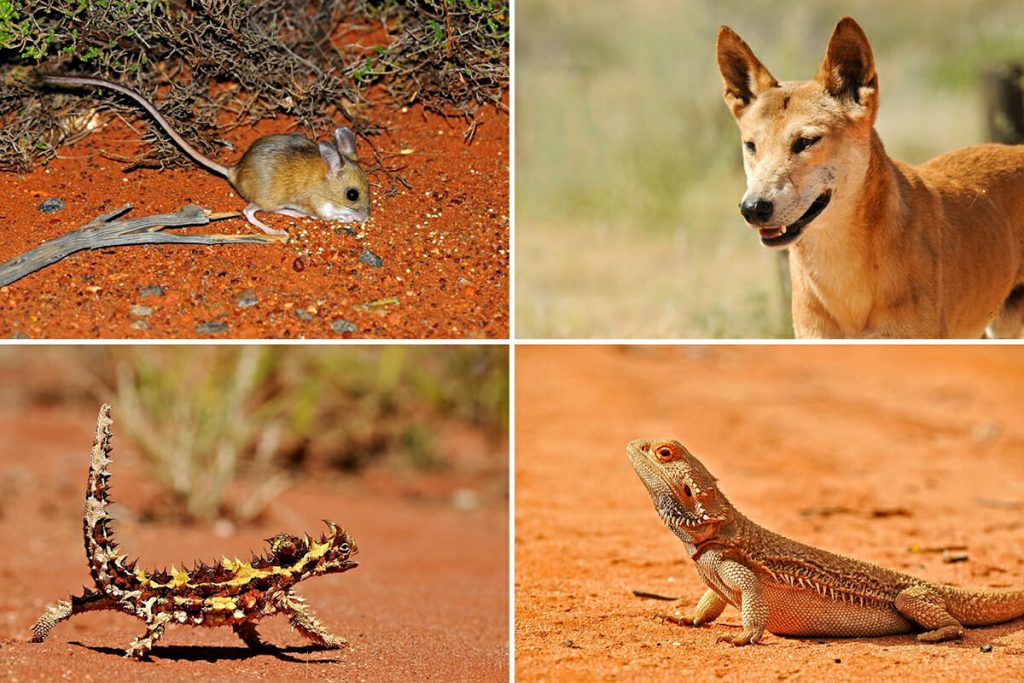 One of Australia’s most striking landscapes, the Simpson Desert is a largely uninhabited arid region that covers 143,000 square kilometres in Central Australia, near the middle of the continent.

Like most deserts, it has a hot and dry climate and usually receives less than 150 mm of rain a year. However, when the rains do come, they often flood the desert.

The periods of above-average rainfall are followed by an explosion of life in the desert. Flowers burst from the sparse vegetation and many Australian desert animals rush to reproduce, taking advantage of the favourable conditions.

As part of our Australian road trip, we visited the Old Andado station that lies on the edge of the Simpson Desert, about 330 km south-east of Alice Springs and stayed much longer than we expected.

The station is an iconic remote Australian homestead that has been restored to its 1920s original condition. In its glory days – in the years before electricity, running water and phones, the station ran cattle, sheep, and horses. It was a true ‘wild west’ lifestyle in the harshest conditions imaginable, with daytime temperatures rising to 50 degrees Celsius.

Now the station is a kind of a museum that lies between two red sand dunes that seem to stretch on forever.  There are some basic cabins constructed within the house paddock and a shower block with a hot water boiler outside.

The dilapidated remnants of the old work sheds and the rusted-out trucks scattered around the homestead make the station feel almost like an archeological dig. The sheds looked like they would be a good roosting spot for bats or barn owls, but we didn’t find any traces of either.

Rain in the Simpson Desert

When we arrived at Old Andado, there was a group of geologists staying at the homestead, so we opted to camp at the foot of the dune instead. And during our first night there, the weather turned and we woke up to an overcast sky and drizzling rain.

The rain didn’t stop for most of the day and by the late afternoon, we knew that the roads would be too washed out to travel on for a few days. We were rained in in the desert! I couldn’t think of a better reason to extend our trip! 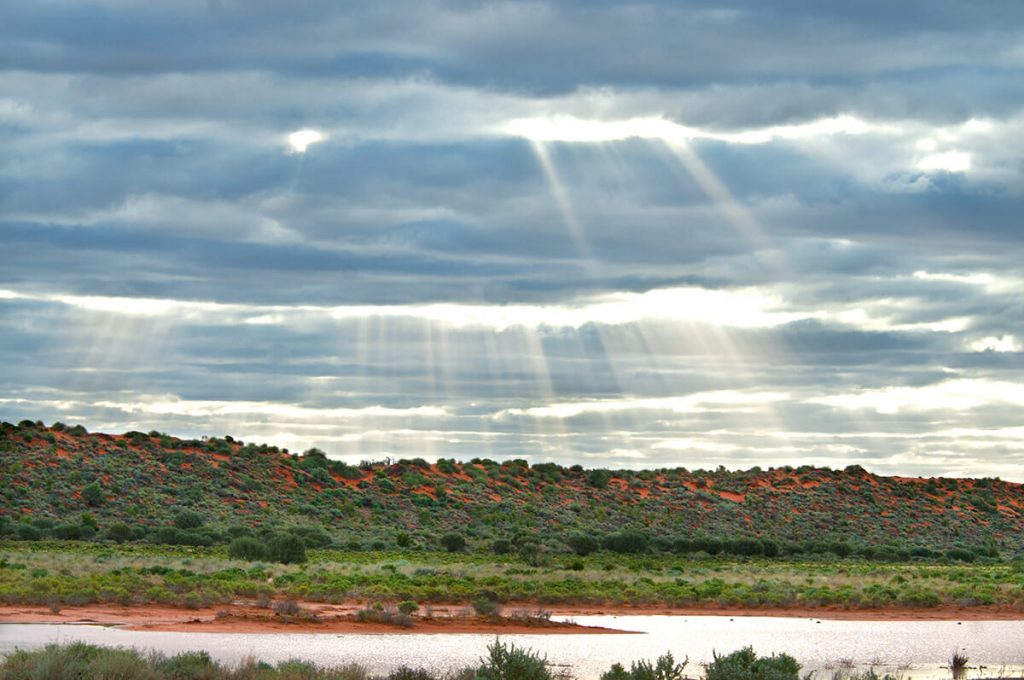 More or less stuck at the homestead we took stock of what was around. A flock of noisy Little corellas seemed to be resident at the site, as were Welcome swallows and Fairy martins. And dozes of Black kites circled above the dunes.

After dark, I came across a Bynoe’s gecko and a Spencer’s Desert burrowing frog. It may come as a surprise, but frogs are some of the most common species of Australian desert animals. Of course, they are rarely seen, because they spend most of their lives burrowed underground. They emerge above ground only a few times in their lives, after periods of heavy rain. And when I say ‘heavy rain’, I mean a proper downpour.

Frogs emerge from their burrows for a single purpose – to find a mate and reproduce. So, they need to make sure that the puddles where they’ll leave their eggs, will not dry out too quickly and kill their tadpoles. That’s why they wait for heavy rains to produce enough water so it would seep into the ground to wake up the frogs from their slumber.

Once the rain cleared we went to investigate our surroundings. We drove out about 6 km from the homestead and went for an exploratory walk on the plains. Almost immediately we noticed that the sand was crisscrossed with a multitude of tracks. This place was rodent heaven.

A lot of the tracks ran in an organized fashion: there would be a central mound and a number of ‘runways’ leading away from it in different directions, some of which ended at a smaller mound which was connected to an entire network of different mounds by more well-trodden ‘runways’.

At night the plain literally came to life. The ‘runways’ turned out to belong to Long-haired rats and the species were clearly ‘booming’. Long-haired rats are known to undergo ‘boom’ and ‘bust’ or ‘crush’ cycles in response to resource availability.

This year brought above-average rainfall to the region and the rodents were quickly responding to the abundance of food. There were still many young around.

In amongst the Long-haired rats, there were a couple of Short-tailed desert mice and a few Spinifex hopping mice – one of the cutest Simpson Desert animals. Looking like mini kangaroos they hoped only short distances away from their burrows and immediately retreated back to safety at the slightest disturbance.

On the drive back, a Desert mouse ran across the road and froze in the headlights, which gave us a chance to take a few close-up photos of it.

The following night we drove to a gibber plain that we passed on the way in. It was a cold and miserable night and through there were a few desert frogs around, not much else was happening. And then I caught some unusual eye shine with my head torch. I thought it was another desert frog, but on closer inspection, it turned out to be a Lesser hairy-footed dunnart!

While it may look like a little mouse, it actually belongs to the Dasyurid family, like the much bigger Quolls and the Tasmanian devil. The Dasyurids are the native Australian marsupial predators.

On the drive back we spotted an old dingo, probably the one that has been leaving tracks in the sand around the homestead. A few meters up the road from where we saw the dingo, we spotted a fox.  So much for the theories that dingo presence suppresses fox populations.

The next night we decided to spend a bit more time exploring the ‘homestead dunes’ rather than going further afield. There were a lot of rodents around, but for some reason, they were much more nervous than their compatriots out on the plains.

Some of the larger rodents looked quite different from the long-haired rats and I think these were Plains mice, but I could never get close enough to them to make sure.

While chasing the rodents up the side of the dune, we saw a cat down on the plain. And it was curious enough to come right up to us to see what we were and what we were up to.

Australian feral cats fascinate me. Obviously, they are decimating Australia’s biodiversity and that’s a great shame. But we don’t seem to be able to do anything about it. Eventually, we will have to accept them as part of the Australian landscape, and they will become Australia’s own wild cat.

Natural selection will keep shaping Australia’s cats and it would be fascinating to see the range of adaptations they develop for living in the desert conditions.

But before that happens, the feral cats, together with foxes will keep devastating native Australian wildlife. To get an idea of the range of Australian desert animals that have been extirpated by the introduced predators, check out this post about the mammals of Australian Outback.

Birds in the Simpson desert

During the day, we took a drive around the property and came across a waterhole that attracted an abundance of birdlife. Flocks of Diamond doves, budgies, and zebra finches dotted every branch of the dead tree standing nearby. A few Red-tailed black cockatoos were camped up at the top of a different tree.

However, most of the birds we saw around the homestead. There were usually a few Galahs, a Red-capped robin, Black-shouldered kites and Brown falcons.

There are of course many more birds making a living in the harsh Australian deserts. Here is the post I wrote about the birds I spotted in Australian Outback while working at a wildlife sanctuary.

Reptiles in the Desert

One of the most common animals in the Australian Desert is a Bearded dragon. They can be seen lying on the ground, sitting on fences, hanging off tree branches, or sitting dab-smack in the middle of the road.

We came across a large Bearded one that was desperately trying to look as flat as he possibly could to appear to be part of the road.

But the coolest reptile and one of the most extraordinary desert animals in Australia is the Thorny Devil. Aside from an intimidating array of conical spikes that cover the top half of its body, the Thorny devil is endowed with a false head on the back of its neck. The lizard presents its fake head to the potential predators by dipping its real head when sensing danger. The bite on the squashy false head is unlikely to be life-threatening.

Avoiding predators is not the only challenge for the creatures of the desert, they also have to find water to survive. The Thorny devil’s ingenious solution lies in the shape of its scales, which are ridged in such a way that they direct water to its mouth. All the devil has to do is stand in the puddle or rub past dew-covered vegetation and the water will be delivered straight to its mouth.

It was a fantastic experience to spend five days in a true Australian desert, probably the most remote place I have ever visited. As we were leaving, heading back towards Kulgerah, Old Andado turned up a final sight to remember: a huge Wedge-tail eagle was trying to drag something off the road. That something turned out to be a dead cat that was hit by a car not too long ago. There is no waste in nature.

Here is the full list of animal species in the Simpson Desert.

For the adventurous souls, there are caretaking opportunities at Old Andado

How to get to Old Andado

Birds of Australian Outback and Where to see them