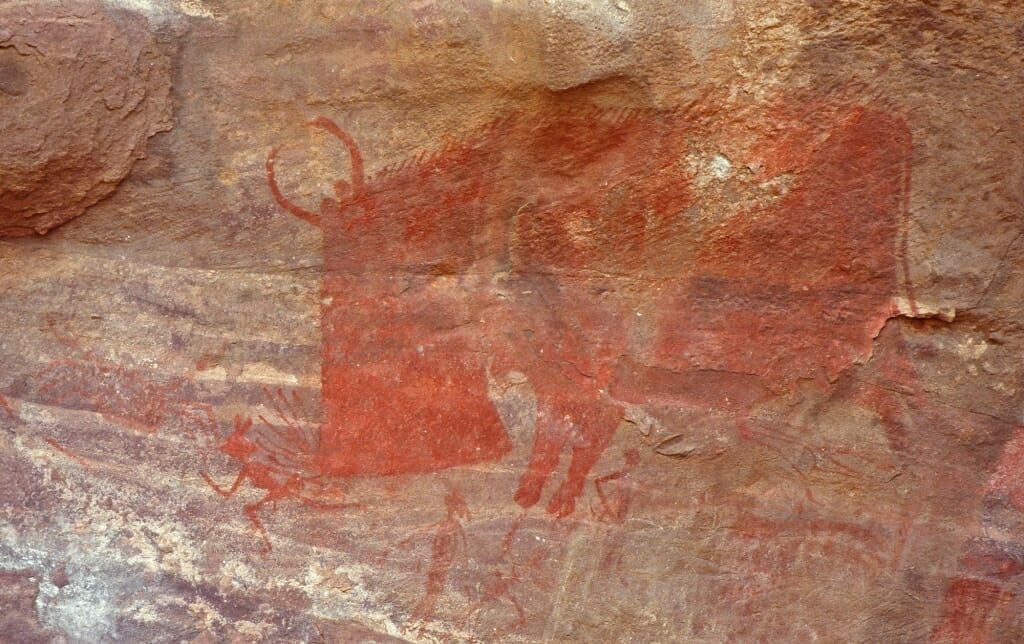 Eventually, my journey has brought me to Bhopal – the site of the infamous 1984 pesticide plant disaster that resulted in 4-8 thousand deaths (depending on the source of the estimates). 18 years later the city is still a grim and joyless place like so many other cities in India. But to me, this place was the beginning of a new adventure – I was on the way to Kipling’s Mougly country – Kanha National Park.

Though, before I took off to Kanha, I decided to visit another interesting place, called Bimbetka caves and I decided to do this in style. Since I spent considerably less cash than I had anticipated, I thought that I would treat myself to a cab ride to the caves. The hotel where I stayed was reasonably nice, it had a tiled bathroom with hot water, air-conditioning and even cable TV with ‘Gross Point Blank’ showing on my first night there. Such creature comforts gave me the reassurance that the hotel’s services could be relied on. So it was through the hotel that I booked the taxi to the caves.

Mad Max ride to the caves

When I actually saw the taxi in the morning, to say that I had my doubts would have been a serious understatement. The car looked exactly like Russian Pobeda – an unfortunate World War II relic. I am actually quite sure it was Pobeda, given the uncanny resemblance and the fact that India was on the Soviet’s “foreign aid” list.

The interior of the vehicle was missing at least one sit, and the others looked so lumpy that I didn’t even want to think about what they were actually stuffed with. In the place of the missing front passenger seat sat a massive loudspeaker with a wild mess of wires running from it to various spots in the car.

Despite the unfortunate condition of his vehicle, the driver looked as proud of himself as if he was driving a limo. He even opened the door for me, which was probably the only reason why I forced myself to get into the car. Reciprocity… A person makes a nice gesture towards you, and you feel obliged to reciprocate and do something generous in return.

But while looking at this car was promising to become the oddest experience of my day, the experience of riding in it was truly unforgettable. There was, of course, no air-conditioning since it was not invented at the time this car was manufactured, and it rattled like an old Aeroflot plane.

To breath or not to breath

There was a continuous choice to be made: open the windows so that the breeze gets in, or endure the heat and keep the windows closed so that the dust from the unsealed road doesn’t clog your eyes, mouth and nose. And then of course, the speaker came to life.

Or God, have I actually paid for this?  The speaker didn’t or couldn’t produce any bass sound, for which it overcompensated with making the higher frequency notes even higher. I like Indian music, I really do. I grew up watching Indian movies and the songs just stuck with me. But listening to it inside a tin can through a dysfunctional loudspeaker at ear-shattering volume went far beyond my tolerance limit. I went with it for as long as I could, but in the end, I had to break the driver’s heart and ask him to turn the volume down to the halfway mark, at which point the music became almost pleasant.

So there I was, bumping along a dirt road across India in a car from my childhood war movies and listening to the music from that same childhood. When we finally arrived at the caves, I experienced such a powerful sense of relief that it did not matter what those caves had to offer; I would have loved them. This was probably not fair to the caves since they were actually quite amazing.

As the name suggests, Bimbetka caves are a complex of caves, but what is not obvious from the name is that the walls of the caves are covered with various drawings made by early humans that lived there over a very long period of time. The drawings represent several distinct time periods, with the earliest paintings dating back to approximately 30,000 years. The caves themselves have been inhabited since 200,000 years ago.

There are around 243 rock shelters at Bhimbetka, but only a few are open to the public. The paintings found in the rock shelters are quite similar to the Aboriginal rock art in Kakadu National Park in Australia.

Within some of the caves, I could even see the platforms on which the primitive people would have slept.  It felt bizarre to find myself in my evolutionary ancestors’ bedroom. The entire scene looked unnervingly real as if the early Homo sapiens resident had just gone out for the afternoon hunt.

Since I wasn’t in much of a hurry to return to my fancy cab, I went for a little walk in the surrounding forest and spotted a chipmunk.