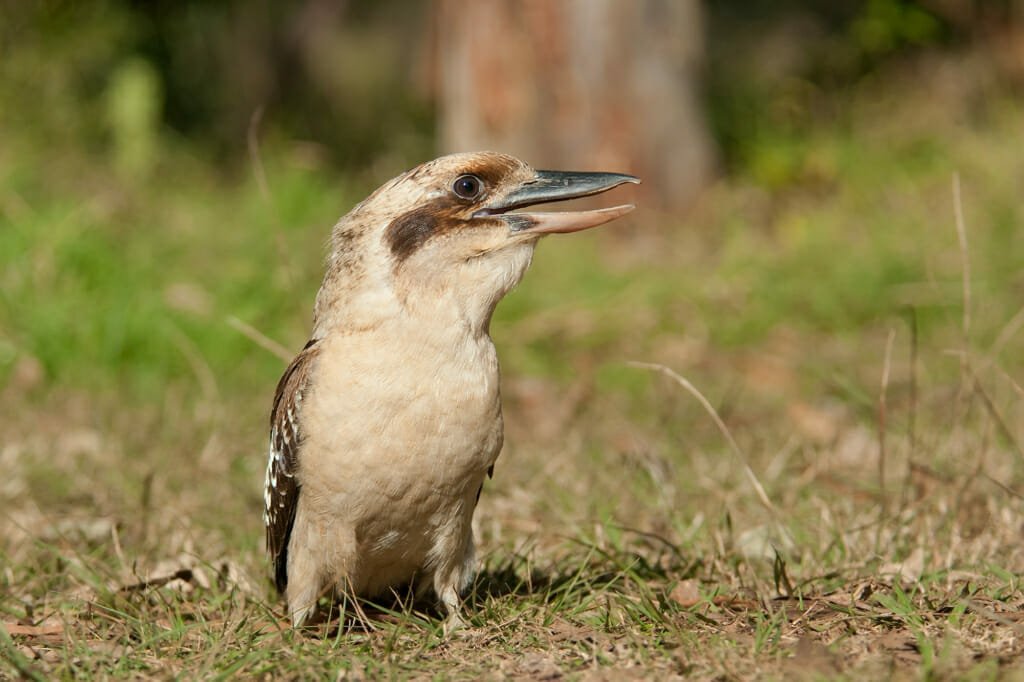 Nestled in the Nepean River valley in the lower Blue Mountains near Glenbrook, Euroka campground is a popular picnic and camping spot and one of the best places to see Blue Mountains wildlife at close range.

There are plenty of things to do at Euroka once you had too much relaxing. You can give your legs a workout on a Nepean River walking track, check out the stunning views at the Tunnel View lookout, or check out Aboriginal cave art at the Red Hands Cave.

My friend and I visited Euroka campground for a day mainly to try to track down the local kangaroos, have a picnic and explore the area. And we found some lovely surprises.

Need to know about campign at Euroka

Mingling with wildlife at Euroka campground

Mornings at Euroka are dominated by the comings and goings of Laughing Kookaburras. Largest members of the Kingfisher family, these birds prey on snakes, lizards and small birds and mammals. They are brazen, bold and loud birds.

I found out exactly how bold when I attempted to eat my BBQ lunch. I had a piece of meat on the fork that I was holding in my hand while talking to a friend.  There were quite a few birds sitting on lower branches around our spot.

Suddenly one of them was flying straight past me – I could feel the rush of air on my face as it beat its wings inches away from me. And only when the initial surprise was over, did I realize that it lifted the piece of meat off my fork. The boldness and the precision of the ‘attack’ left me duly impressed. Though, the fact that the bird continued to compete with me for my lunch, didn’t.

After lunch, we went to check out the Nepean River walking trail. It’s a reasonably steep 2.8 kilometer loop trail that takes about 1hr 15 min to complete.

From the grassy clearing of the campsite, the trail follows Euroka Creek into a narrow canyon filled with lush ferns and towering lilli-pillies. It then descends steeply via a bit of an obstacle course of rocks and buttress roots into Fairlight Gorge and to the Nepean River where you could take a swim if you don’t mind (very) cold water. Otherwise, relax by the river to recover your energy for the steep climb.

We saw a few birds along the trail – Superb fairywrens, a Rockwarabler (an NSW endemic), an Eastern yellow robin and a large colony of Bell miners, which in fact were the reason for the uncommonly low diversity of birds. Bell miners are communal breeders that aggressively defend their territory from intruders, which leads to dramatically decreased species diversity in areas of their colonies.

From the river follow the signs for ‘Euroka Via Bennetts Ridge’. It’s a steep climb until you reach an old management trail. From here it is a more gentle assent along the management trail and then along Bennetts Ridge Fire Trail. You emerge from the bush at the Bennett’s Ridge campsite at the southern end of Euroka clearing.

Euroka campground is one of the best places to see kangaroos in the Blue Mountains. In the past, it was well- known for the friendly mob of Eastern Grey Kangaroo that could be seen grazing at the edge of the forest almost every afternoon. Unfortunately, it appears that in recent years kangaroos have dispersed over a larger area and the sightings have become much less frequent.

When we returned from the trail, it was a good time to start looking for kangaroos and we were lucky to spot one. A big shaggy animal with an impressive set of biceps –clearly a dominant male was grazing in the forest.

A recent study linked the size of arm and shoulder muscles in male kangaroos to their attractiveness to females. It is as if he is saying – ‘look at me, I managed to invest so many resources into growing to this size and developing such impressive musculature because I have good genes that make me immune to sickness and infection’. And the fact that testosterone suppresses the immune system makes this claim true.

The big guy spent most of the afternoon grazing at the campground, but no other kangaroos appeared as the time went on. We dind’t take it as a reflection of his appeal to female kangaroos – he really did look quite impressive.

By the time we peeled ourselves away from the lone kangaroo, we noticed that Kookaburras had retreated into the forest. In their place, dozens of Sulphur-crested cockatoos descended on the clearing and were feeding on grass seeds and generally foolling around, as cockatoos do.  On closer inspection, it appeared that there are a few Long-billed corellas in the flock as well. Kangaroos and cockatoos – such a typical Australian bush sceen.

On the way back to the city, we decided to add a visit to a dramatic lookout to our day out in the mountains. And there is a perfect spot not far from Euroka campground. As you follow Euroka road on your way out, take a right onto the Mount Portal Trail. A Tunnel View Lookout car park is less than 2 km away. From the car park, it is a 260-meter walk to the lookout.

The view from Tunnel View Lookout is quite incredible. It stretches on forever, over the Fairlight Gorge with the Nepean River running across the bottom.

How to get to Euroka Campground

Euroka Campground is located near the town of Glenbrook in the lower Blue Mountains. To reach it from Sydney, follow the Great Western Highway to Glenbrook and take the Ross Street turnoff. At the end of Ross Street turn left onto Burfitt Parade that will eventually become Bruce Road. Follow this road for 4.2km following the signs for Euroka campground.

Gordon Falls to Pool of Siloam and Lyrebird Dell – one walk, endless waterfalls

Most picturesque Blue Mountains waterfalls you will want to explore

Is Valley of the Waters the most beautiful walk in the Blue Mountains?

The Lost World of the Grand Canyon walk