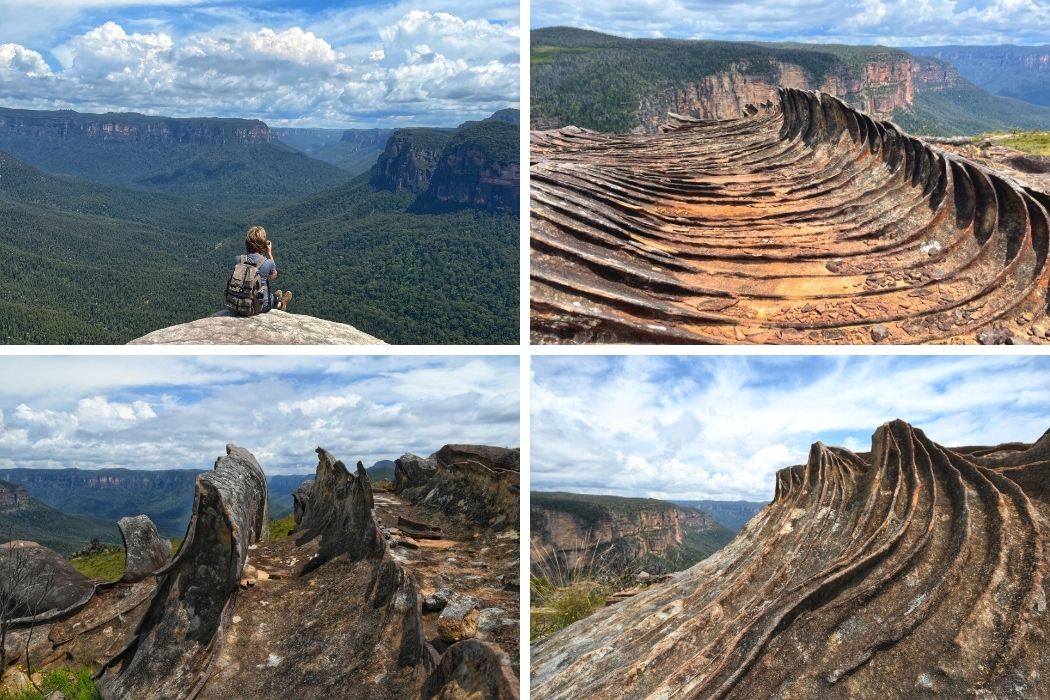 The incredible Butterbox Point in Leura is a dramatic rocky wonderland. At this striking lookout, the volcanic iron deposits exposed by the erosion of the softer rock around them created an alien landscape of razor-sharp stone swirls and jagged waves. And below them lies an inaccessible and wild section of the Grose Valley.

Butterbox Point trail shares the trailhead with Mount Hay track, at the end of the unsealed 15-km long Mount Hay Road (only the first 3 km of the road are sealed). After a couple of rainy years, this road has become pretty churned up with deep potholes and long corrugated sections.

We did see a couple of sedans parked at Lockleys Pylon carpark, but after our experience on a pothole-riddled dirt road on the Tarkine Drive, I find the prospect of attempting Mount Hay road in a low clearance car downright terrifying, particularly the last few kilometres.

A curious and entirely unrelated fact: about 2.7 km along Mount Hay Road from Leura you pass a Buddhist retreat – Brahma Kumaris where the Dalai Lama likes to stay during his visits to Sydney.

In this post hide
1. Butterbox Trail at a Glance
2. Butterbox Point Trail
3. The Butterbox
4. Butterbox Rock Formations
5. Know Before You Go
6. What to Do Around Butterbox Point
7. More Ideas for Things to Do in the Blue Mountains

Butterbox Trail at a Glance

The trail (and the views) start from the information board at the carpark. This trailhead is shared by three walks: Butterbox Point, Butterbox Canyon, and Mount Hay. After about 200 meters, you come to a signposted intersection with Mount Hay trail veering to the right. So keep left to stay on the Butterbox trail.

The trail travels across an exposed ridge top and gives you gorgeous views of the cliffs ahead. If you look down, you’ll see patches of lighter green below. These are the rare and endangered Blue Mountains hanging swamps.

These unique habitats form when there is a layer of clay underneath the sandstone. The rainwater seeps through the sandstone but starts to pool when it reaches the clay. And eventually, it starts to percolate back up to the surface creating waterlogged soil that turns into peat.

After another couple hundred meters, you reach another signposted intersection with Butterbox Canyon trail veering to the left. Keep to the right and stay on the Butterbox Point trail. The canyon trail goes to an abseiling point for canyoning adventures.

From here, the trail heads uphill and once you cross a small rocky mound, you’ll see The Butterbox formation – a rectangular-shaped plateau about 30 metres high and 100 metres across. This formation was named by Cyril Byles in 1918 for its similarity to butter boxes that were in use at the time.

At the base of The Butterbox, you’ll see two trails: one skirting it to the right and the other to the left. These trails meet again on the other side of the formation. The difference is that the right trail travels very close to the cliff edge behind The Butterbox, while the left one doesn’t. So if it’s muddy or windy, pick the left trail (it also has a couple of interesting caves in the side of The Butterbox).

You come to the first cave as soon as you approach The Butterbox. It’s a large wind-eroded opening in the side of the rock formation. From the cave, the trail meanders along the shaded side of The Butterbox. If you are visiting in the warmer months, keep an eye out for snakes snoozing in the grass. Since this trail is not busy, you could be the first person of the day walking it. Which means that no one has flushed out the snakes before you.

If you do spot a snake, simply stop and back up a little. Most snakes will retreat when disturbed. If it doesn’t, there is always the right-hand side trail as an alternative. But you are unlikely to need it.

The second cave is more of an overhang that creates a cozy shelter from the elements right where the trail starts heading downhill. Occasionally people camp here so you might see a fresh fire pit.

From the base of The Butterbox, the trail brings you to a rocky outcrop with spectacular views of the Grose Valley. This section of Grose Valley is inaccessible, so you are looking over one of the wildest areas of the Blue Mountains. To your left, on top of the enormous and spectacularly sheer Walford Wall, you can see the conical mound of Lockleys Pylon. Ahead of you, in the distance is Mount Banks. Below, Rocky Point Creek is snaking across a wild valley.

There is a ledge here that looks like it’s jutting out over a huge drop. But in reality, there is another ledge just below it. It’s a good spot to take a photo – it will look as if you are sitting on the edge of the cliff.

If you stay here long enough you are likely to see some birds of prey. We spotted a Peregrine falcon that appeared to have a nest on one of the cliffs.

You can explore the ledge for different viewpoints of the valley and Walford Wall towering over Butterbox canyon. But as spectacular as the views are, the most interesting part of Butterbox Point is an area of surrealistic rock formations, that some people (mostly geologists) consider to be the most striking rock formations in the Blue Mountains.

To reach these surreally-shaped rocks, head left along the ridge that runs parallel to Walford Wall towards an open area between the edge of the ridge and The Butterbox. You’ll see the rocks as soon as you head in that direction. You can also see them from the top of The Butterbox.

It’s quite a large and heavily eroded area on the top of the ridge. The combination of sandstone platforms and layers of ironstone exposed by erosion created an alien landscape of razor-sharp stone swirls and jagged waves.

One area looks like the ruins of a Roman amphitheatre with remnants of the circular spectator tribunes around a jagged centrepiece. Another is similar to a whale carcass lying on its back with its baleen bristles expanded. Yet another, looks like the remnants of a huge wooden boat. Some formations look like petrified water ripples, others like swirls of breaking waves. All this extravagance is set against the background of an enormous sandstone wall and the green expanse of the Grose Valley below.

It is a surreal landscape of rocks fashioned into frivolous shapes as if they were made out of butter. You could spend half a day here exploring all the different formations and still not see them all. There is even a little swamp among the rocks.

As one of my readers explained: the concentric ironstone patterns are called Liesegang rings. They are understood to be formed from the precipitation of insoluble haematite from soluble iron in groundwater. Similar patterns also occur in different chemical processes, including in biology, and not specifically from volcanism. The hard and resistant haematite ironstone is then exposed during weathering. However, the bulk chemical origin of some of the ancient iron in sedimentary rocks of the Blue Mountains may be from tertiary volcanic basalts that do also occur nearby on Mt Hay and Mt Banks, but the evidence is not conclusive.

Once you are done exploring, head towards The Butterbox, re-join the trail at its base and return the same way you came. If you have trouble finding the trail, climb to the top of The Butterbox. You can actually see the carpark from the high points on the trail.

Know Before You Go

Butterbox Point trail travels over a very exposed ridge top and the weather here can make a significant impact on your walk. On hot days, it’s very hot on this trail. And on windy and stormy days it can be downright dangerous. Especially if it’s raining heavily, the road may get too slippery for the drive back. Thankfully, the trail is very short, so you can keep your eye on the weather while you are exploring.

Another thing to be aware of is the snakes. The exposed surfaces along this trail are the perfect sun baking spots for reptiles. So watch where you step. Or wear gaiters, if you have a pair.

And of course, there is the condition of the road to consider. Particularly, the section between Lockleys Pylon and Mount Hay carparks. There is a narrow section where the road travels near a massive drop and the surface of the road is slightly slanted towards the drop. It’s fine for a 4WD in dry conditions, but it would be a hair-razing drive if the road surface was wet and slippery.

What to Do Around Butterbox Point

If you made the effort to drive Mount Hay Road, you might like to spend more time exploring the area. And there are plenty of great trails leading from the road.

The closest one to Butterbox Point is the short but steep Mount Hay track (3 km return; 2 hrs). One thing to keep in mind though is that the vegetation at the top of Mount Hay is quite lush, so you won’t get great views from the summit.

If you do want to enjoy more views, Lockleys Pylon trail (7 km return; 2.5-3hrs) is a better option. Like Butterbox Point, it’s an exposed trail, so take weather into consideration before starting on Lockleys Pylon walk.

Another great trail is the 7.5 km (3-hrs) Fortress Ridge trail. Or for a shorter walk, consider the 2.5 km Fortress Rock lookout trail. Both walks start from Fortress Ridge carpark on Mt Hay Road.

More Ideas for Things to Do in the Blue Mountains