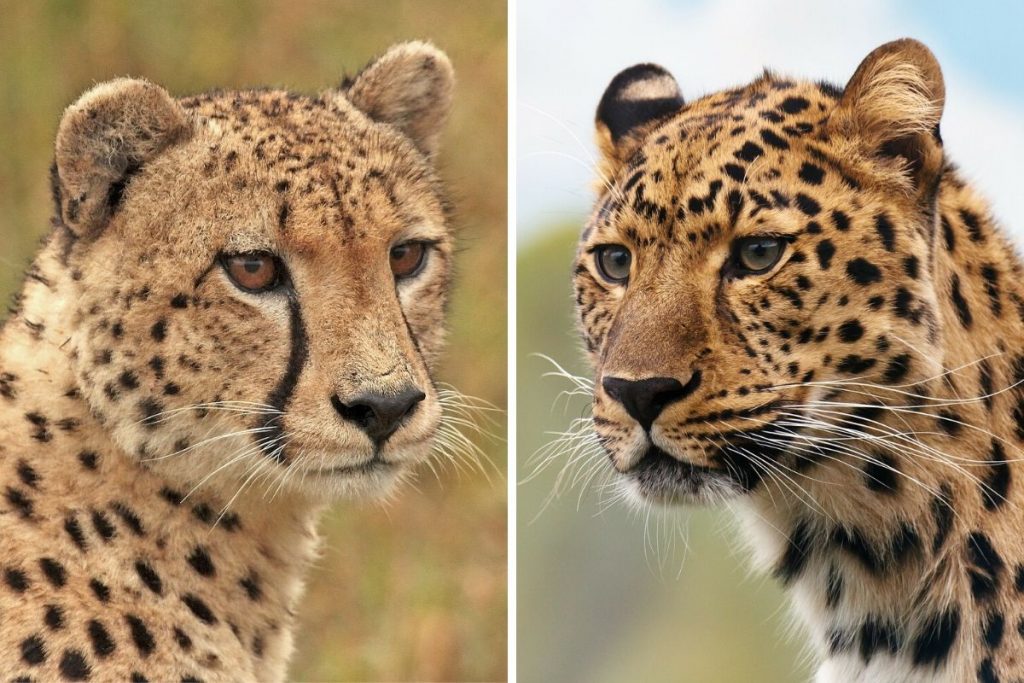 So, you are planning a wildlife safari and dreaming of seeing wild cats in their natural element. But can you tell one spotted big cat from another? Cheetah vs leopard, which cat is which?

Both cats are large. Although only the leopard is technically a big cat. Cheetah belongs to the small cat sub-family. Even though you could say that the cheetah is bigger than the leopard, in a sense that’s it’s the taller of the two cats.

Both cats have tawny coats with black spots. But their spots are quite different and their pattern is one of the easiest ways to tell the two cats apart.

Read on to find out different ways to tell the difference between cheetah and leopard and where to see these magnificent spotted cats.

Cheetah (Acinonyx jubatus) is quite distinct from all other cats and looks more similar to a greyhound than a typical feline. This is mainly due to a host of unique adaptations the cheetah developed to become the fastest mammal on earth.

From the evolutionary perspective, the cheetah and the leopard are not closely related. The leopard (Panthera pardus) is part of the Big cat subfamily, closely related to the other members of the Panthera genus – tiger, lion, snow leopard and jaguar. While the cheetah is the single member of the genus Acinonyx that belongs to the subfamily of small cats. Cheetah’s closest relatives are puma and jaguarundi.

The family tree relationship also explains why cheetah can purr like most small cats, but can’t roar like the leopard and the other members of the Panthera genus (lion, tiger, snow leopard and jaguar).

So how do you tell the difference between cheetah and leopard? The trick is knowing what the key differences are.

As far as appearances go, the quickest way to tell cheetah vs leopard is by their body shape. These two cats are built for different hunting strategies. While the leopard, like most cats, is an ambush predator, the cheetah is the only cursorial hunter in the Felidae family, meaning that it hunts by chasing prey at high speed over a long distance. Therefore, the leopard is built for power while the cheetah is built for speed.

Consequently, the leopard has a muscular, solid, and stocky built. And while the cheetah’s long legs make it taller than the leopard, it is much more delicately built.

Another good way to tell the difference between leopard and cheetah is by looking at the shape of their heads and the patterns on their faces. Cheetah’s head is small and rounded with smaller teeth in contrast to the leopard’s larger, more elongated head with powerful jaws.

But the biggest difference is in the cats’ faces. The cheetah has “tear marks” – the black lines that run from the inside corner of its eyes down its cheeks. Unlike many cats, cheetahs are diurnal hunters (they hunt during the day) and it is believed that the black marks on their faces function to reduce glare into cheetah’s eyes while hunting.

The eyes of the two cats also differ in colour. Cheetah’s eyes are amber-brown while the leopard’s eyes are yellow-green (apart from the Amur leopard of the Russian Far East that has blue eyes).

Cheetah’s diurnal lifestyle also means that it doesn’t rely on its whiskers as much for sensing its surroundings in low light conditions. The leopard’s whiskers are much more developed than the cheetah’s, as you can see in the image below.

As with most of their body features, the difference in the shape of cheetah’s and leopard’s tails is explained by their lifestyles. Cheetah uses its tail as a counterbalance when running at full speed and taking sharp turns. Essentially, the cheetah’s long flat-shaped tail acts as a rudder on a ship.

The leopard also uses its tail for balance when climbing trees, but its tail has a more familiar tubular shape to it.

Another way to tell the difference between cheetah and leopard is by looking at the pattern of their spots. The cheetah has solid black spots while the leopard has a pattern of spots and rosettes. The leopard’s rosettes are ‘hollow’ inside, filled with the background tawny colour (unlike the jaguar’s rosettes that have smaller spots inside the rosettes).

You tell leopard vs cheetah even when you don’t see the animals themselves, simply by looking at their footprints. Most wild cats have retractable claws, which means they use them only when necessary. The cheetah is one of only three species (along with the fishing cat and flat-headed cat) that have non-retractable claws, like those of dogs. It is not surprising, considering that like most canids (dogs), the cheetah is a cursorial hunter. The non-retractable claws function like tire threads by providing tractions for turning at high speeds.

This difference in claw morphology makes it easy to distinguish cheetah’s and leopard’s footprints. Cheetah’s prints have visible claw marks, unlike the leopard’s more feline footprints.

Cheetah’s footpads are also harder than those of most other cats.

Apart from the differences in their appearance, the cheetah and the leopard have a number of behavioural differences that may be helpful for identifying them in the field.

As noted earlier, the cheetah is the only cursorial hunter in the cat family. Its hunting strategy is based on its ability to sustain a high-speed chase across the open savannah. This incredible cat is capable of reaching a speed of 120 km/h and taking sudden sharp turns at high speed.

Once the prey is within the striking distance, the cheetah brings it down by striking it with its front paw and delivers the killing bite to the throat, suffocating the animal.

Chasing prey at high speed requires open habitat, so you are likely to spot a cheetah out in the open where it has a clear view of the horizon and can easily detect potential prey.

The leopard, on the other hand, is an ambush predator. It relies on its ability to sneak up on its prey until it is within the striking distance. The leopard’s charge is a powerful burst of speed, but a short-lived one. If it is unable to catch its prey within a few leaps, it will give up the chase and look for luck elsewhere.

If the charge is successful, the leopard will kill its prey either by a crushing bite to the back of the neck or by a suffocating bite to the throat in the case of larger prey.

Unlike the cheetah, which often has its kill stolen by other predators, like lions or hyenas, the leopard is strong enough to drag its kill into a tree to keep it safe from the scavengers.

Unlike most cats that prefer to hunt under the cover of darkness, the cheetah is a diurnal hunter. The leopard is more flexible in terms of its activity patterns, but it prefers to hunt at night.

Because of its light physique, the cheetah is not as strong as some of the other predators that it shares its habitat with, and its cubs are vulnerable to predation by lions and hyenas. To compensate for the high mortality rate of its young, cheetah usually has large litters of cubs. It is not unusual to see a female cheetah with 4 or even 5 cubs.

The leopard, as a stronger predator is better able to defend its cubs and a typical litter for a leopard is 2 cubs.

Like most cats, the leopard is a solitary hunter with males and females coming together only to mate. Male cheetahs, on the other hand, are known to form coalitions (a collective noun used for a group of cheetahs) of 2 to 3 individuals, often brothers. So if you spot several spotted cats together, they are most likely cheetahs.

Of the two cats, only the leopards are known for becoming man-eaters. Most reports of leopards hunting people come from northern India where the cats targeted mostly women and children.

As of 2017, the Cat Classification Task Force of the Cat Specialist Group recognizes the following five subspecies of the cheetah:

While most people know cheetahs from Africa, the species used to be more widely distributed. Today, the last population of Asiatic cheetah surviving in Iran is listed as Critically Endangered on the IUCN Red List of Threatened Species.

The leopard is distributed across multiple isolated populations from South Africa to Sri Lanka. There 8 recognized leopard subspecies:

The leopards have lost 60% of their range in recent decades and as a result, the global population of the leopard is listed as Vulnerable. However, some of the leopard subspecies are in imminent danger of extinction.

The Javan leopard is restricted to the Indonesian island of Java. With the remaining population of approximately 250 individuals, it is also listed as Critically Endangered.

The Persian leopard occurs from Turkey and Iran into Afghanistan and Central Asia. It is listed as Endangered and the remaining population of fewer than 870-1290 mature individuals is in decline.

To learn more about the cheetah and the leopard, as well as all other wild cats, check out Luke Hunter’s book Wild Cats of the World.

Where to see cheetahs and leopards in the wild?

When choosing a safari destination, most people think of Africa. And with good reason. Africa is the birthplace of wildlife safari. From the endless savannah of Masai Mara in Kenya to the lush Okavango Delta and the sandy Kalahari desert in Botswana, Africa is by far the best continent for spotting a number of wild cats, including the cheetah and the leopard.

Outside of Africa, the best place for spotting leopards in the wild is Sri Lanka. In fact, Sri Lanka’s National Parks have the highest rate of leopard sightings on earth. There is, of course, a downside to being popular. In recent years, Yala National Park in Sri Lanka’s south has become so overcrowded that visitors wait in traffic jams for their chance to approach a leopard. Not only would waiting in a queue rob you of a sense of adventure, but it also causes unnecessary disturbance to the animals.

So, it is best to give Yala a miss and explore the less crowded Udawalawe and Wilpattu National Parks instead.

But wherever you decide to go on your quest of seeing wildlife, it is always best to travel with a dedicated wildlife tour provider, leave logistics to the professionals and enjoy the company and the expertise of a professional wildlife guide. You could even visit both destinations (Africa and Sri Lanka) with the same company, like Far and Wild Travel.

In Sri Lanka, you won’t have any trouble identifying the big cat when you see it – the leopard is the only big spotted cat on the island. But Africa is home to two large spotted cats: a cheetah and a leopard and the two look similar enough to cause some confusion to an untrained eye. However, if you know what to look for you can easily spot the difference between these two cats.