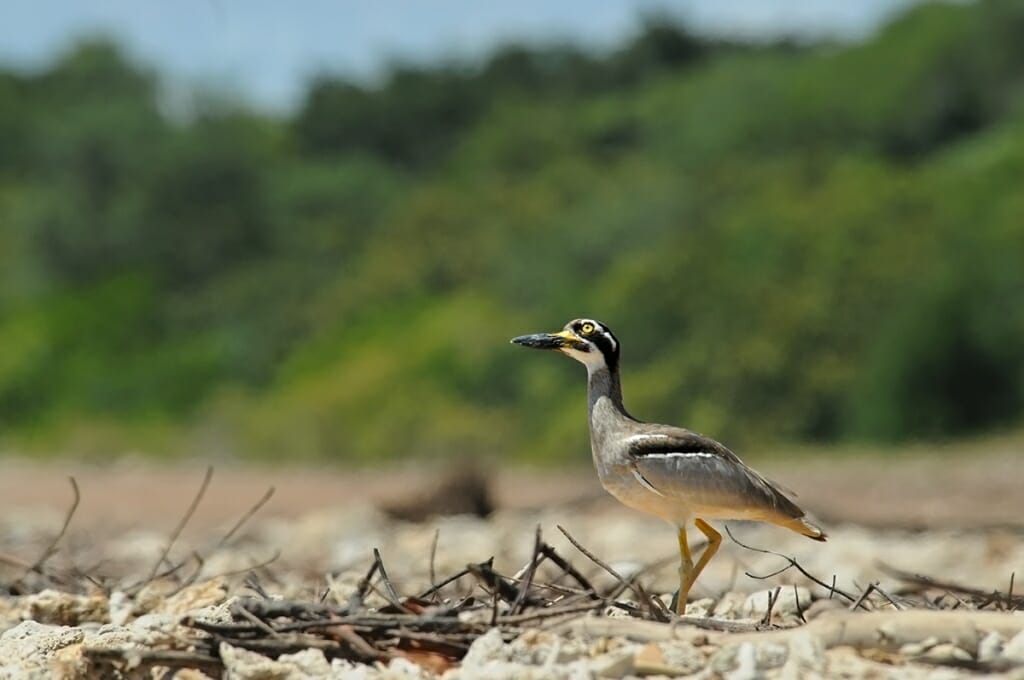 From Fogg Dam, we continued our epic Australian safari to Darwin for a few days of creature comforts and some wildlife watching around town. You can find wildlife in most cities and in Darwin, you don’t even have to go far.

We started our exploration of Northern Territory’s capital at Darwin Botanic gardens. We went to the gardens primarily in hopes of spotting resident Rufous Owls that have been nesting near the Rainforest area for a number of years. Unfortunately, by the time we arrived, the owls haven’t been seen in the gardens for months (though they have since re-appeared).

What we did find, however, was a little stream with tall grass growing on its banks. This was a perfect habitat for seed-eating finches. We’ve already seen a number of new species of finches on our trip, but there were still more to discover. This particular spot was great for Crimson and Double-barred finches. The birds were gorging themselves on the grass seeds and washing them down with the water from the stream.

On our second day in Darwin, we drove out to Lee Point to see sea birds and waders.

Australia’s Top End beaches are off limits for swimming. And for a good reason. If a Saltwater crocodile doesn’t get you, a Box jellyfish probably will. As a result, in contrast to the rest of Australian coastline, Northern Territory beaches are often virtually empty. And what happens if you take people away from the beach? Wildlife comes back.

The beaches of Casuarina Coastal Reserve at Darwin’s Lee Point were teaming with wildlife. The first inhabitants that caught our eye were Black kites. There were dozens of them: in the air, on the trees fringing the beach and even on the beach itself – looking for tasty morsels washed up by the tide.

Such a high density of predators made other beach residents a little nervous. The Beach stone curlew kept a wary eye on the kites as it foraged on the beach. It is an uncommon species across most of its range, and it relies on undisturbed open beaches for habitat. It is the only member of the stone curlew family that is not strictly nocturnal.

Out by the water, Red-capped plovers kept bursting into short sprints when kites flew overhead.

Some of the birds, however, were more worried about other members of their own species than about the kites. Things were lively in the breeding colony of Great-crested terns.

While communal living provides the benefit of safety in numbers, it also drives the competition for food and mates. It is not just catching the fish that makes a successful hunt; it is also being able to swallow it mid-air before being robbed by others.

Among the Great-crested terns, there were a few Caspian terns – Australia’s largest tern, and an occasional Little tern, as well as a fair number of Silver gulls.

As the day went on more beach-side residents arrive. A flock of Great knots swooped in and settled on the rocks exposed by low tide. This species is a winter visitor to Australia that will soon return to its breeding grounds in the Siberian tundra. A few red blobs in the flock on closer inspection turned out to be Red knots.

More species came and went throughout the day: Reef egret, Intermediate egret, Whistling kite, little Solder crabs. It was refreshing to see such species diversity on the beach in contrast to the usual Homo sapience homogeneity. Without the people, the beach becames Darwin’s wildlife spectacle.

The following day we headed to Territory Park, as it was the only place where we could see Antilopine wallaroo – one of the common Northern Territory animals that avoided us elsewhere. The park was actually quite nice and the bird show was well worth watching to see a Black-breasted buzzard using a rock to crack an egg and an Osprey diving into a pool for a fish.

In the afternoon we took a ferry to Mandorah to see the bats that roost underneath the jetty there. The roost was located directly underneath the wooden boards of the jetty and was quite hard to find,  leave alone photograph.

A Brahmini kite and a Sea eagle were very easy to find on the other hand, as they circled above us for a good half an hour.

Darwin marked the end of our epic road trip across Australia, but we were a long long way from home. And the best thing about not having a  specific plan was that we could return home by revisiting the greatest hits of our trip.

If you have any questions about planning or taking a road trip across Australia, don’t be shy, leave a comment!