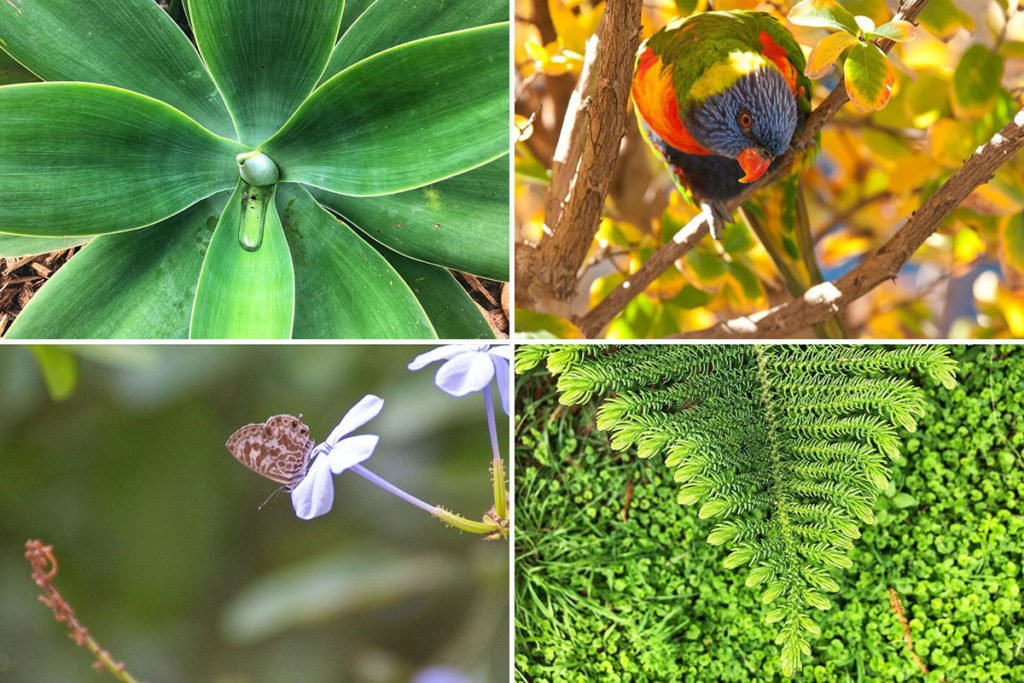 As the world pauses and most of the people around the globe retreat to their dwellings to ride out the wave of the coronavirus pandemic, many of us started looking for creative ways of satisfying our wanderlust and enjoying nature during the COVID-19 quarantine. Some watch live feed from wildlife cams, others write travel stories about the contents of their bedroom. But as a wildlife travel blogger, how do you write a killer blog post when you are stuck inside your apartment? So I decided to think outside the box and take an actual wildlife-watching journey. In my garden.

An urban garden in Sydney is not exactly a prime wildlife-watching destination, but beggars can’t be choosers. And after 2.5 weeks of being cooped up in my apartment, I was ready to be ridiculed by my neighbours for the sake of a little exploratory experience. I was going on a garden wildlife safari!

Early on in my explorations, I came across a fresh kill – un unknown critter had devastated one of the mushrooms that popped up on the lawn after the recent rains. The site looked undisturbed – the scavengers haven’t gotten to it yet.

The air was ringing with the calls of Rainbow lorikeets feeding high up in the canopy of the eucalypt tree. Have they witnessed the kill? Was the predator still lurking nearby?

Before I had a chance to go through a mental list of possible mushroom hunters, I got distracted by a butterfly spectacle. In a true style of an urban wildlife extravaganza, about half a dozen tiny little butterflies fluttered above a flowering bush. Their tiny size and incessant movement provided enough challenge in terms of photography for me to lose myself to the chase for a good 15 minutes.

Through my camera lens, I noticed something the butterflies didn’t – a Praying mantis concealed in ambush. It was virtually indistinguishable from the leaves to which it clung. The theme song from Jaws started playing in my head as I watched the carefree butterflies flutter past the stalker a hair’s breadth away from their untimely death.

It would probably take the mantis a few days of patient waiting for one of the butterflies to land right next to it. But I think it is a game the mantis is good at playing.

After the butterfly adventure, it was time to move to the next square meter of the garden. The landscape changed from the flowering bushes to a shaded patch of lily plants. The leaf litter underneath the lilies was home to an endemic Australian reptile – the Common garden skink.

It’s early autumn, so these guys were quite relaxed. But come spring, the male skinks will be chasing, biting and clawing each other, battling out their territorial disputes. It is not uncommon to see several skinks locked together in a melee all holding on to each other. Life’s a battle for the tiny reptiles.

Despite their violent tendencies, however, the garden skinks are quite shy and tend to dart for cover at the slightest disturbance. The only chance to photograph one is to wait in ambush.

Crouching silently in the middle of the garden path I could just pick out the faint voices of the onlookers – my photo safari antiques were piquing the interest of my neighbours. I was lucky to be exploring this underrated destination before it got popular and crowded.

Suddenly the skinks scattered and a hushed silence filled the air. I twisted around and came face to face with a Pied currawong. It strode purposefully across the lawn intent on finding its next meal. These large predatory birds (they love skinks!) are well adapted to urban environments and their presence has been linked to the decreasing number of smaller bird species in the city.

This, of course, doesn’t apply to Australia’s noisiest honeyeater and Eastern Australia endemic – the Noisy myna. As if to prove its invincibility, one landed on the edge of the birdbath and proceeded to splash around without a care in the world.

Noisy myna is another successful urbanite. These birds benefited from the anthropogenic landscape changes and outcompeted most other birds in Sydney. This presents a bit of a conundrum for wildlife conservationists.

We value endemic species, especially if they have a restricted distribution range. But we don’t like the species that become too successful and come to dominate our altered landscapes at the expense of other species. Essentially, we don’t like species that do to the local ecologies what we’ve done to the entire planet.

The eventual departure of the Noisy myna concluded the birdwatching activities for the day and I headed to the eastern corner of the garden where I found the garden’s mushroom snatchers. Two silent killers – Cornu aspersum, were curled up at the base of a lily plant, having a snooze by the looks of it.

Also known as the Garden snails (see the pattern here?) these creatures of the night leave their slimy traces on the garden paths for the early morning commuters to discover. Seeing two of them in broad daylight felt like unveiling one of nature’s best-kept secrets.

After the discovery of the mushroom-killers things turned downright sinister. My next encounter was with a colourful arachnid, which in Australia is always a tense experience. Although this particular spider had one thing going for it (apart from its appealing coloration), it caught at least one of the mosquitoes that assault the human residents of Bridge Gardens each night.

Thankful to the spider for its community service, I moved further east. By about two steps. And I made my next discovery. Another noisemaker – a cicada had discarded the shell its outgrown and left its terrifying mummy-like cacoon hanging off a leaf by a hind foot to put fear in the hearts of any passers-by who would care to crouch down next to a low-growing plant and look underneath its leaves.

When I discovered a small raised mound made of leaves and dry casuarina needles I was too scared to imagine what kind of monstrous creature it may belong to. Even the entrance to the sinister nest-hole looked like the face of a giant angry spider. In the Australian bush, poisonous dangers lurk behind every corner.

At the end of my eventful safari, I came across a bird feather trapped by the leaves of a tall bush. It looked like it might belong to one of the two Kookaburras that provide an alarm service to the residents of Glebe Gardens apartments most mornings. I haven’t heard them in a few days and I hoped they haven’t fallen prey to the mushroom-killing snails.

With a final survey of some rain-collecting vegetation, I returned home with a new appreciation of the wildlife dramas that unfold in my garden unseen by most.

Stay tuned for more dramatic wildlife encounters in my garden. We still have a while to go before we can venture further afield.

7 thoughts on “Garden Safari: How to enjoy nature during a lockdown?”