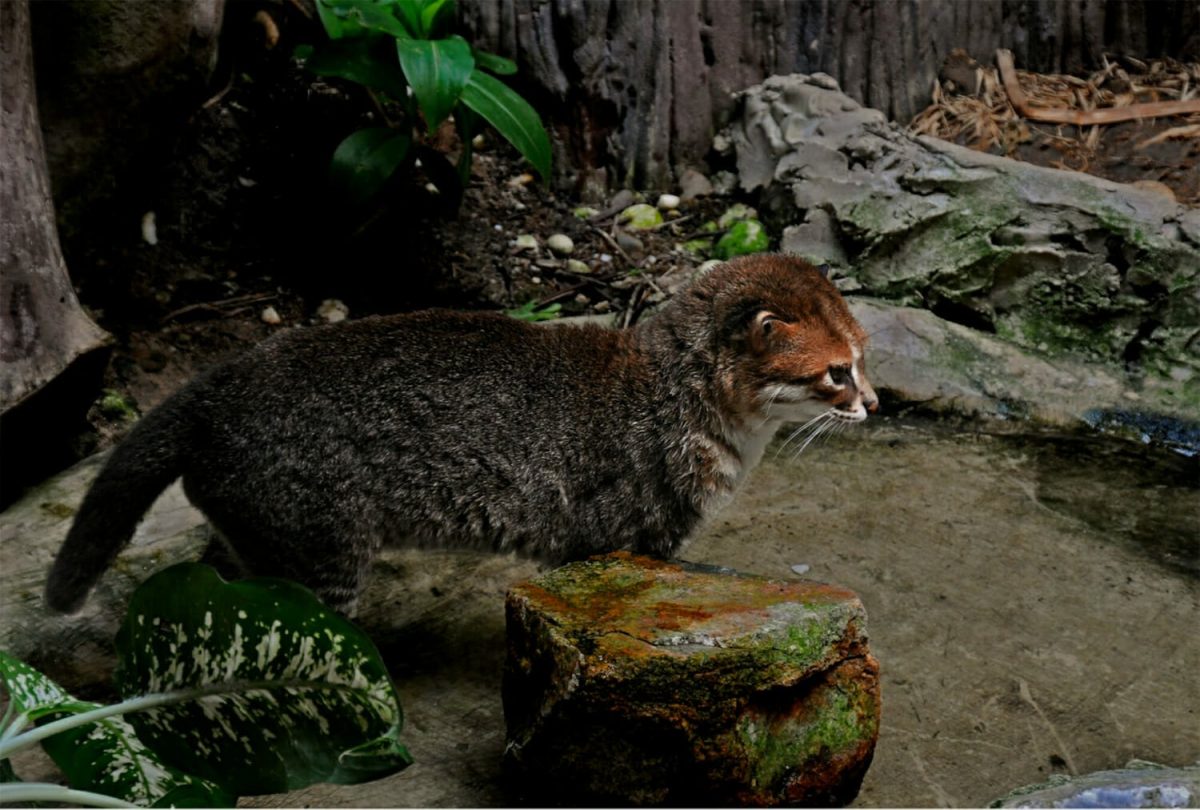 The tropical night is refreshingly cool, as I follow my guide Razmir along the elevated wooden walkway to the small jetty on Kinabatangan River. We emerge from the forest onto the open riverbank and stop dead in our tracks.

Hanging low above the river, the huge disk of the moon is glowing dark red in total eclipse. The sight of the blood-red moon is so imposing, alien and awe-inspiring that for a moment I forget about everything else.

When I return to my senses, I take the moon as a good omen – I need all the luck I can get. Tonight is my fifth and final night on Borneo’s Kinabatangan river and my last chance to fulfill my quest of seeing the endangered Flat-headed cat in the wild.

The river is the only place in the world where these little hunters can be spotted with a bit of luck. For the abundance of wildlife that can be seen here, the Kinabatangan river should be on every wildlife watcher’s Southeast Asia itinerary.

One of the least known wild cats in the word, the rabbit-sized Flat-headed cat is also one of the strangest. It takes its name from its unusually long snout and the flattened top of its head – an adaptation the cat developed to accommodate its semi-aquatic lifestyle.

Unlike most cats, the Flat-headed cat spends most of its life in or near water, hunting fish and small crustaceans with the help of its partially webbed feet.

Sadly, the cat’s preference of riverine habitat puts it in direct competition with humans, who are generally fond of living on the riverbanks and cultivating the surrounding lands for agriculture.

At least 60 percent of the cat’s habitat is already gone and more is disappearing at an alarming rate, mainly being taken up by the oil palm plantations.

The floodplains of the lower Kinabatangan river remain the final stronghold of the species. Although even here, they are rarely seen, as I learned after searching the riverbanks for four nights and not finding any signs of the cats.

Tonight, the tide has finally retreated, exposing the muddy riverbanks and giving us prime cat-spotting conditions.

Cruising along Kinabatangan River at night

We set off down the river in a small motor boat, leaving behind the lights of the Kinabatangan Jungle Camp – one of a dozen or so accommodation options strung along the bank of the river around the village of Sukau.

I glance behind us and find the sky lit up by the bright band of the Milky Way arching over the river from one bank to the other.

We cruise under the spectacular sky until we reach a smaller tributary – the Menanggul River. Here the vastness of the universe is replaced with the misty confines of the flooded forest.

Tree trunks rise out of the river and dictate our path along the narrow tributary. The vegetation spills from the banks into the water and in places the canopy closes above our heads, cutting out the rest of the world. And all around us, wisps of white steam rise off the still dark surface of the water, limiting visibility even further.

The beam of Razmir’s spotlight illuminates a small bird perched on a branch overhanging the river above our heads. “Do you know why birds sleep here?” he asks. “To avoid predators?” I venture a guess. “Yes, but also because it’s warmer above the water”. I look at the steam lifting off the water and realize that this is practically a natural sauna for the birds.

We explore the tributary for about an hour and find no traces of the elusive cat.  Was I wrong to consider the lunar eclipse to be a lucky charm? By now, the moon has moved out of the Earth’s shadow and its bright light is blotting out most of the starts and illuminates the jungle on the riverbank.

We travel deeper into the forest and soon Razmir spots a civet in the low branches of a tree. The boat driver gently brings the boat to the bank and I get up to my feet, ready to go for a walk as we have done on previous nights.

Just as I am about to jump off the boat, the forest explodes in crushing noise and movement. A giant crocodile is tearing through the undergrowth at an astonishing speed. Stupefied for a moment, I feel a bit unsteady on my feet, as I realise that I nearly stepped on a camouflaged crocodile.

When Razmir spots another civet I patiently wait for him to investigate the forest and to plan our path – the freshly exposed riverbank is treacherously slippery and soft.

Standing on the bow of the boat I explore the jungle illuminated by my headtorch. Just a few meters away a bright pair of mammalian eyes is staring back at me. “Must be Razmir’s civet”, I think to myself. We look at each other. The reflected eyeshine is so bright that I can barely distinguish the shape of the animal behind it.

Then the animal moves its head and suddenly I see that it was not a civet at all, but a dainty rusty-coloured Flat-headed cat. It considers us calmly for a while, then slowly gets up, turns around and walks away, leaving me staring at its distinctively short tail.

The encounter was so brief, I didn’t even have a chance to photograph the cat. But this is the nature of wild cat watching. You can spend days intensely concentrating on the search, but the encounter with the cat will always be sudden and often brief. But that makes the joy of seeing the cat so much more worth it.

I can almost feel the boat driver’s relief when we give him the go-ahead to turn around and finally head home. But his joy is ironically short-lived. We make it as far as the main river when the engine coughs a few times and dies – we have run out of petrol. To add insult to injury, we are in the mobile reception dead zone. So, rowing it is for the boys. Muttering … under their noses, they row the boat upstream towards the distant lights of the guest house.

I look at the bright moon and wonder whether every bit of good luck needs to be balanced out by a mishap of some sort. Though I am not the one rowing, and as far as I am concerned, the night has gone splendidly.

The access point for Kinabatangan is the village of Sukau, located about 2 hours away from Sandakan. The accommodation options on the river range from the luxurious Sukau Rainforest Lodge to the more basic, but rustic Kinabatangan Jungle Camp.

There are a number of homestay options on the river, the best of which is Osman’s Homestay. Osman is a very talented spotter. I had some of the best close encounters with wildlife on a cruise with Osman, including the sighting of a Philippine slow loris in the image above and a Western tarsier below.