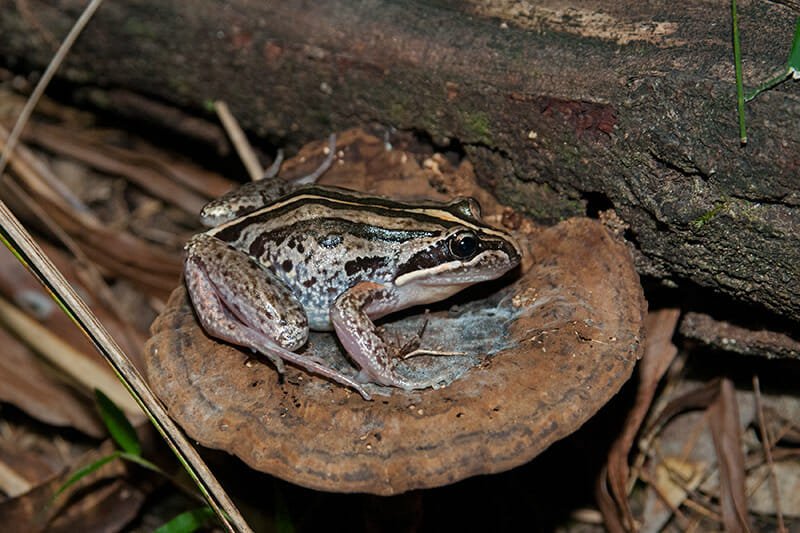 After being M.I.A. from the Frogs and Tadpoles Study-group (FATS) for precisely 10 years I rejoined the ranks of amphibian aficionados for a 4-day weekend trip to Smiths Lake, NSW on the north coast. 10 years ago I visited the lake during a torrential downpour in an attempt to find the elusive Green-eyed tree fog (Litoria chloris) that according to NSW National Parks records has been regularly spotted along Sugar Creek road. And true to form, on that rainy February night in 2003 these frogs were out in force, calling from every surface imaginable. There were so many of them that the challenge shifted from finding them to not tripping over them.

Despite the fact that 2013 trip was taking place quite late in the season (last weekend of April), I was secretly hoping for a repeat performance of Red-eye tree frog extravaganza. Little did I know that the abundance I witnessed in 2003 was a rare exception rather than the rule and it only happened after a particularly heavy rain that coincided with FATS field trip only that once – in 2003.

And yes, it WAS very late in the season, so despite the beautiful warm weather our chances of finding frogs were not particularly high. In the end, we averaged about 2 species a night over 3 nights. The Eastern common froglets (Crinia signifera), off course were everywhere. Striped Marsh frogs (Limnodynastes peronii) were also reasonably common across most of the sites.

I was of course more interested in discovering new species – those I haven’t seen in the past. Luckily, despite the late season, I wasn’t disappointed. The first new addition was the Red-backed toadlet (Pseudophryne coriacea). A fairly average-looking critter exactly the colour of wet mud, which made it very difficult to locate calling individuals, since they call from underneath the clumps of vegetation.

Another rather unremarkable newbie was a grayish-brown Haswell’s frog (Paracrinia haswelli), though as long as they were new to me, all species were welcome.

The new species that I was most excited to find was the adorable Jervis Bay tree frog (Litoria jervisiensis). Also knows as the Curry frog, it gives off a curry-like aroma. Before this species was formally classified, field biologists referred to it as the Curry frog, apparently.

The only other critters we saw during the nights were the exceptionally-well camouflaged Moritz Leaf-tailed geckos (Saltuarius moritzi), virtually invisible on the limestone walls of the quarries and the Gray-headed flying foxes. The flying foxes have been exhibiting some interesting behaviours in response to climate change. As the weather becomes warmer the flying foxes have to continuously extend their range, and recently they have moved into Tasmania and even New Zealand. Even more interesting is how they did it. The first time Grey-headed flying foxes were detected in New Zealand it was just a few individuals. The following year New Zealand’s population counted a few dozen. So how did the original bats convinced the others to follow them into the lands unknown? Or how did they know that New Zealand was there in the first place?

Australian Pelican, White-faced heron and Australasian grebes were making themselves at home on the lake while  White-bellied sea-eagle,  Wedge-tailed eagle, Whistling kite and Grey goshawk were patrolling the sky, ever on the lookout for an unwary critter to have for breakfast. The nearby Boat beach at Seals Rocks turned up perhaps the best surprise of all – three Eagle rays (Myliobatis aquila) that came to feed in the shallows and literally swam between our feet.

The beach also has some great rock pools that become exposed during the low tide.