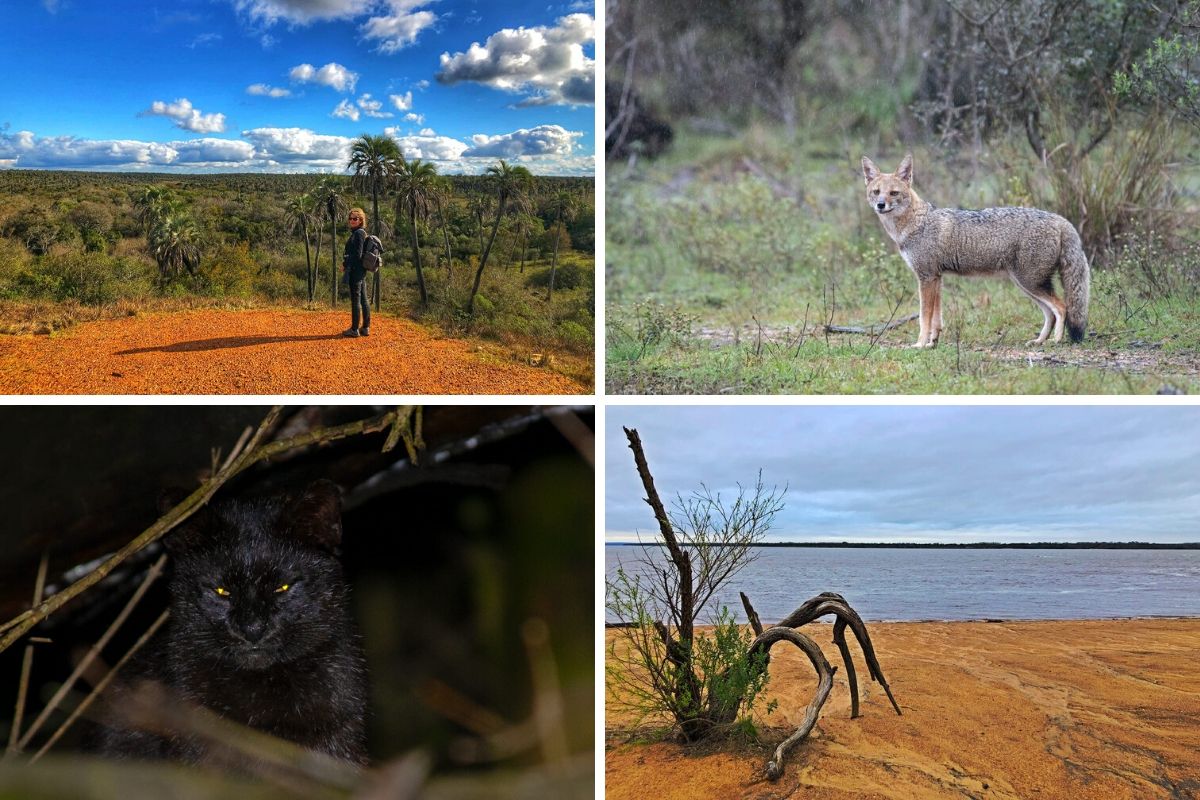 My search for one of Argentina’s small wild cats, unimaginatively named the Geoffroy’s cat, gets off to a rocky start when I arrive in El Palmar, Entre Rios during an unexpected cold snap that sees the night temperatures plummet to two degrees centigrade.  But rain, hail, or shine, I am determined to fulfil my quest of seeing all 40 species of wild cats in their natural habitat, and I am here to find my lucky number 15.

Searching for the Geoffroy’s cat

Lying 381 kilometres north of Buenos Aires, along the Uruguay border, El Palmar protects Argentina’s last remaining groves of yatay palms and coincidentally harbours a healthy population of Geoffroy cats – the spotted felines about the size of a domestic cat. Curiously, many of El Palmar’s Geoffroy’s cats spot the unusual all-black coats – a result of a genetic condition known as melanism.

I meet my Clarke Expediciones guide, Joaquin Ghiorzo, at our base at Mirador Del Palmar lodge and after a much-needed hot cup of coffee, we head out on our first exploration of the park.

Under the moody, overcast sky the surrounding landscape has a distinctly primeval feeling it. Rows after rows of ancient palm trees stretch all the way to the horizon. Deeper in the park, where the side trails lead to the banks of the El Palmar and the Uruguay rivers, the palms give way to the dense riverine forest – the domain of the cats.

On one of the side trails, we find the first proof that we have come to the right place – a neat pile of feathers and a feline paw print hidden away under the roadside bushes.

“Hundreds of doves come to roost here after feeding in the surrounding cornfields,” explains Joaquin. This is an all-you-can-eat buffet for the feline hunters.

Once the darkness sets in, it is time for the cats to emerge and for us to get serious about our search. I roll down the car window and get blasted by a wave of icy cold air. Even inside the gloves, my hands are freezing, as I hold the spotlight out of the car window. Shivering, we hunker down and begin scanning the edge of the dark forest for any movement.

Four freezing hours later we still haven’t seen any signs of the cats. “The hardest thing of all is to find a black cat in a dark room, especially if there is no cat,” once noted Confucius, and I couldn’t agree with him more.

“Hopefully, it will be warmer tomorrow,” encourages Joaquin, as we head back to the warmth of our gas-heated cottage. Little did we know that tomorrow will bring a torrential downpour that will persist for almost two days.

By the time I wake up in the morning, the world is lost beyond the misty veil of heavy rain. Feeling defeated, we head into the park and spend the day driving along the soggy trails.

But if I thought I had it tough, it was the viscachas that were in real trouble. These odd-looking nocturnal rodents dig elaborate systems of family burrows, known as Viscacherias, and after a day of rain, their burrows are flooded. By nightfall, we find the wet and miserable viscachas busy renovating their washed-out homes while their shivering young wait nervously by the burrow entrances.

The only creatures not bothered by the rain are the El Palmar’s frogs. The roadside ponds and puddles are ringing with a cacophony of their croaking calls. Not surprisingly, the only animal we spot at night, apart from the unfortunate viscachas, is a chubby American ground frog hopping across the road in stops and starts.

“Take your time, it’s your home,” encourages it, Joaquin. “This is not an animal crossing the road, this is a road crossing the wildlife habitat,” he muses out loud, and it fills me with hope that with defenders like this, Argentina’s wildlife has a good chance of persisting into the future.

Did you know, Argentina is one of the safest countries in South America?

The next morning starts with more rain, but before I resign to the idea of chasing frogs for the rest of the trip, the clouds part, the sun comes out, and the world around me wakes up. Roadside hawks fan their feathers to dry in the sun, Whistling herons flock to the newly formed marshes and capybaras wade across the flooded grassland.

Yet when the night approaches, the cats evade us once again. Foxes, armadillos and skunks are all busy looking for their meals along the grassy roadside clearings. But where are all the cats?

Running out of options, we change our tactic and go on a hike along the edge of the park’s campsite. And finally, strike gold. In a dense patch of vegetation right across from the campsite, Joaquin picks up the eye-shine of a cat, reflected in the light of his torch.

I stare into the dark thicket, but can’t make out the shape of the animal behind the glow of its eyes. Cautiously, we make our way into the tangle of bushes, and soon I realize why the cat is so hard to see – it is completely black, as dark as the night around it.

The moment I finally see it, the rest of the world fades away. I am completely captivated by its beautiful face; it’s fierce alertness and its effortless grace as it lifts its paw to wash its face.

It watches me calmly, aware of my presence, but willing to share a few minutes of its secretive life with me. Until it blinks and dissolved into the surrounding darkness.

Giddy with excitement, I fight my way back through the thick undergrowth and emerge out in the open, one step closer to my ultimate dream. Another cat spied in the wild, another wilderness explored, another story left to tell.

As a parting gift, El Palmar unveils its spectacular sky, and we leave the park under the bright band of the Milky Way arching across the palm savannah, making me feel like the universe is giving me a wink.

Geoffroy’s cats have a couple of habits that are unusual among felids. For example, they deposit their faeces in latrines called middens. These latrines are usually located in trees.

Another trick of Geoffroy’s cats is their ability to stand upright, using their tails for balance while they survey their surroundings.

Where is El Palmar National Park?

El Palmar National Park lies between the cities of Colón and Concordia 381 kilometres north of Buenos Aires in Entre Rios Province, along the bank of the Uruguay River that serves as a border with Uruguay.

This area is part of the fertile region between Uruguay and the Parana Rivers, known as Mesopotamia. Not to be confused with the cradle of human civilization in the modern-day Middle East, the South American Mesopotamia stretches from the bank of Parana River in the south to Iguazu Falls in the north.

While El Palmar is not as dramatic a destination as Ushuaia and Valdes Peninsula in Patagonia or Ibera Wetlands in the north of the country, it offers a chance to see some of Argentina’s wildlife on an easy weekend getaway from Buenos Aires.

The 800-hectare Park is bordered by the Uruguay River in the east, Ruta Nacional 14 Highway in the west and eucalypt plantations In the north. It is a fantastic place for watching wildlife within easy reach of Buenos Aires.

The main access road connects the entrance or La Portada off the (off Ruta Nacional 14) and the visitor centre comprised of restaurants, the National Park’s office and the campsite.

There are three side roads leading from the main track to three lookouts: Mirador la Glorieta, Mirador El Palmar, Mirador Los Loros. There are a few walking trails accessible from the lookouts that lead to the streams.

Near the park’s visitor centre, another side trail leads to the Uruguay River and the ruins of an ancient lime facility. It’s a nice spot to gaze to Uruguay across the river and to see some forest birds.

The main road stays open for as long as the park is open (8 am to 11 pm in winter). The side roads close at 8 pm most days but may be closed earlier after heavy rain.

The visitor centre is the hub of activity in El Palmar. This is where the restaurants are, the souvenir stalls and all the administrative buildings of the park. The park’s only campsite is located here as well.

The main restaurant only opens on days where school buses visit the park. On the quieter days, the canteen opens instead.

Another fun thing to see around the restaurant are the signposted Viscacherias – the communal burrows of the Plains viscachas. Though to see the animals themselves you will need to visit late in the afternoon, as the sun begins to set

I stayed at Mirador Del Palmar lodge, which is conveniently located on the other side of the highway from the park. The property is new and still has the look of a cattle ranch, which gives it a bit a rustic charm. The cottages are basic but spacious and the gas heaters are life-savers in winter.

El Palmar National Park was established to protect the last remaining groves of Yatay Palms in Argentina. In the 19 century, yatay palms covered much of Entre Rios province, Uruguay and Southern Brazil, but in our day, corn fields and pasture lands have replaced most of the palm Savannah.

The palm groves of El Palmar are also under pressure from the feral pigs that feed on the saplings. As a result, the remaining yatay palms are old – 300 to 400 years old.

The Argentina Government has found an interesting solution to the pig problem. Once a month, hunters are allowed into the park to shoot the pigs under the supervision of the rangers. The payment for participation in the hunt is a hindquarter from each pig shot. The meat is then contributed to the local school kitchens.

6 thoughts on “Searching for the Geoffroy’s cat in Argentina”