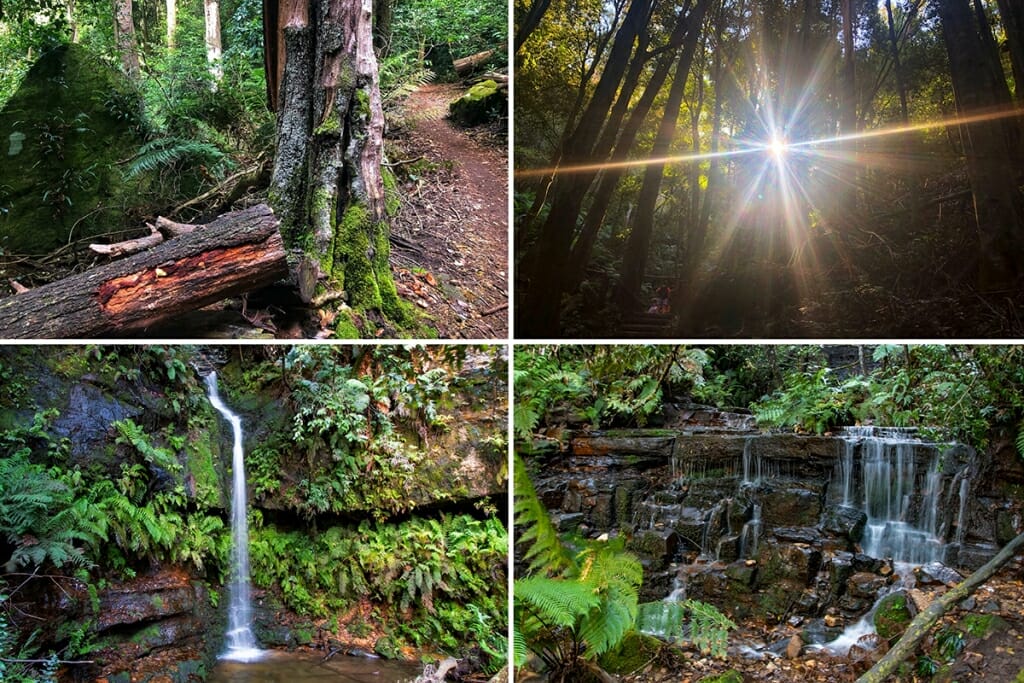 Lying within a 2-hr train ride from Sydney, the Blue Mountains are equally popular with the local hikers and the international tourists. There are hundreds of walking trails within the 2,690 sq km national park, ranging from easy strolls to unadventurous multi-day tracks. Depending on your interest and fitness level, you can explore the waterfalls in the Valley of the Waters, descend into the primeval environment of the Grand Canyon or have a picnic and spot some local wildlife at Euroka clearing.

If you would like to combine adventure with iconic sights in a half a day walk, then consider taking the Giant Stairway and the Dardenelles Pass track. The climb down the Giat Stairway is one of the most scenic mountain trails in Sydney, but itis not for the faint of heart and you will need a reasonable level of fitness to enjoys this hike.

The adventure starts at Echo Point – the most popular spot for day trips to the Blue Mountains. Up to 3 million visitors pass through Echo Point each year to enjoy the views over the Jamison Valley and the Three Sisters – the most recognizable rock formation in the park. But do not fear, the tourist traffic dissipates as soon as you start descending the Giant Stairway.

To reach the top of the stairway, follow the signs to the Three Sisters and cross the bridge that connects the escarpment to the First Sister. From here, you will see a very steep set of stairs leading down the face of the cliff. This is it – the Giant Stairway.

Looking at the near-vertical decent over roughly-hewn stone steps cut into the side of the mountain, you may wonder how many steps are there in the Giant Stairway. Well, I hope you are ready for this – there are 910 massive stone steps and 32 narrow steel staircases that are even steeper than the stones.

As you decent along the sheer sandstone wall of the Three Sisters, the views of the Jamison Valley are quite dramatic, providing you have enough presence of mind to tear your eyes away from the uneven steps and narrow passages to look around.

The stairway ends quite abruptly before your legs had a chance to adjust to being on even ground. Turn left on the forest path at the bottom of the stairway, following the sign to Dardenelles Walking Track.

The track winds gently downhill until it arrives at Leura Forest. After almost a thousand of rough steps on the stairway, the soft trail that runs through the forest is pure heaven.

Here, at the base of the cliffs, the ground is littered with giant boulders that have tumbled down from the escarpment thousands of years ago. Fertile soil accumulated in the spaces between the rocks allowing the rainforest plants to flourish. Numerous streams and waterfalls formed from runoff from the cliff tops, creating pockets of rainforest in Jamieson Valley.

Leura Forest is the most relaxing and enchanting part of the hike. Moss covered trunks of fallen trees strewn among the mossy boulders as if scattered by a giant’s hand. Over the years, trees have fallen over the trail and have been sawn apart to clear the way.

Soon you come to a historic rotunda, that apparently used to be a popular tea house in the 1800s, called the Lady Carrington Diving Hall. Given how difficult it was to get here, it makes you wonder who the patrons of this popular tea house would have been.

Just past the rotunda, the trail crosses a small creek and starts to climb steeply via the sets of wooden stairs, leaving Leura Forest behind.

The assent back to the top of the escarpment is not as steep as the Giant Stairway but takes considerably longer. It meanders past numerous creeks and waterfalls that formed along Linda Creek, starting at Marguerite Cascades. Thanks to the runoff from the clifftops, the creek never really dries up, even during the hot and dry summer months. The cascades flow over sandstone shelves into a shallow pool fringed by the ancient ferns.

The falls and cascades provide a welcome pause during the climb out of the valley. After the epic descent, any kind of uneven terrain feels like a mountaineering challenge. The good thing is that this trail doesn’t get crowded and If you visit outside of public holidays, it is quite possible to have this part of the trail completely to yourself.

From the cascades, the trail continues to climb via more wooden steps, following the Federal Pass, until it crosses Linda Creek again in front of Linda Falls. It is not the most spectacular waterfall in the valley, but it is a lovely spot and a perfect excuse to take a break and catch your breath.

From Linda Falls, the climb becomes steeper as the wooden steps get replaced by the narrow metal staircase.  At the top of the climb, the trail comes to the intersection with the ‘Amphitheatre track’ that heads towards Leura. Turn left here and follow the Prince Henry Cliff Walk towards Echo Point.

Prince Henry Cliff Walk follows the cliff tops gently gaining in elevation. There are a number of sign-posted lookouts just off the trail, all offering dramatic views of Jamison Valley, where you just walked.

One of the best lookouts is Jamieson Lookout. It is perched on a large rock overhang and offers unobstructed views of the Jamison Valley, the Kings Tableland escarpment and Mount Solitary.

At one point, you will cross a small bridge over Banksia streamlet, the same little streamlet you crossed in Leura Forrest, almost 600 meters below.

The trail ends back at Echo Point, giving you another chance to have a look at the Three Sisters and to appreciate how far you’ve descended and then climbed back up again.

The track at a glance

Grand Canyon in the Blue Mountains