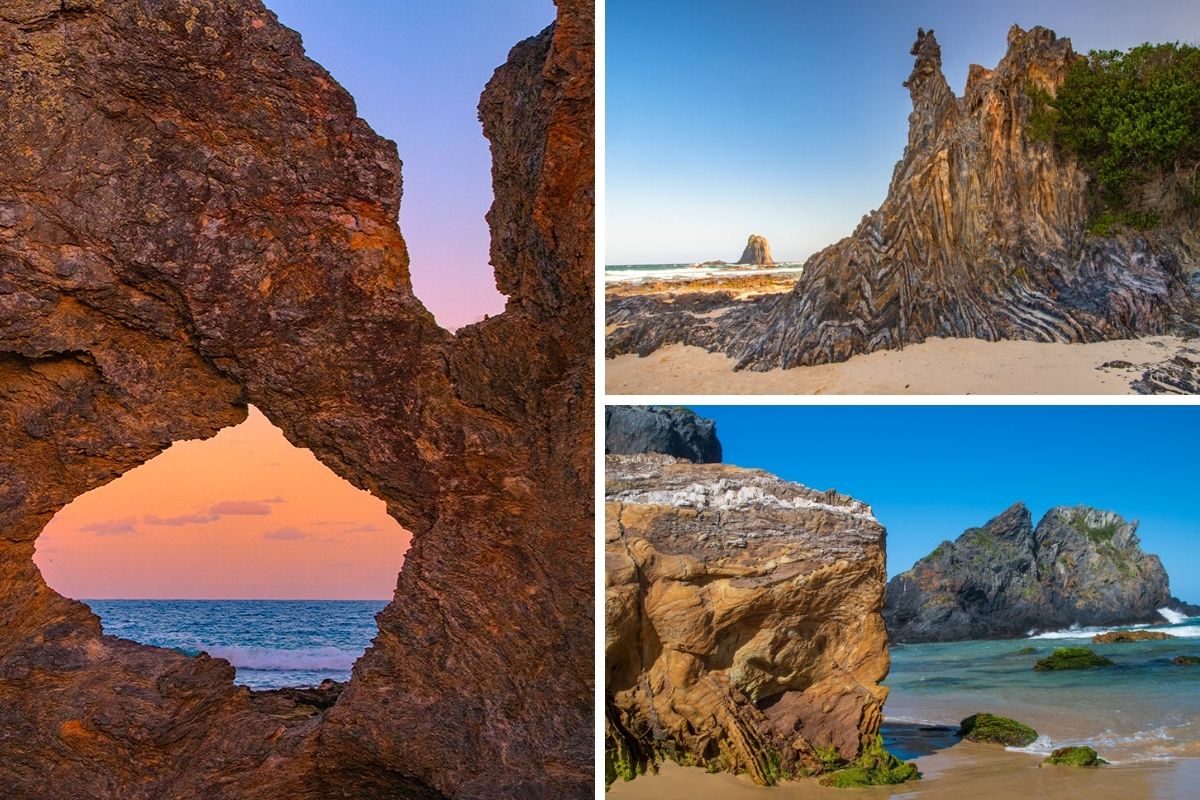 Glasshouse Rocks are an unexpectedly spectacular series of rock formations on Narooma Surf Beach on NSW Far South Coast. Forged by immense planetary forces millions of years ago they are a must-see sight in Narooma.

So what is so special about the Glasshouse Rocks? Well, to fully appreciate them, you need to get a sense of how they formed. I am not an expert on geology and plate tectonics and my background in wildlife biology was of no help in deciphering the specific terminology of geological science, so this is by no means a definitive guide, but here is how I understand it.

The Glasshouse Rocks are part of Narooma Accretionary Complex – a geological structural region on NSW South Coast that is the remains of a subduction zone that forms when two tectonic plates collide.

The rocks you are looking at here are incomprehensibly ancient. According to the Geological Society of Australia, Narooma Chert (the dark material in the Glasshouse Rocks, which is hard, fine-grained sedimentary rock) was deposited on the bottom of the Pacific Ocean over a period of 50 million years from around 490 million years ago. That’s more than 400 million years before the end of the dinosaurs!

Interestingly, that era in Earth’s evolution, the end of the Cambrian Period, coincided with a mass extinction event judging by the fossil evidence. Life was fairly primitive at the time, but if none survived, the rocks would still be standing on Narooma’s beach today, but we wouldn’t be around to appreciate them and to ponder the millions of years of Earth’s history.

For the next few hundred million years, the Pacific tectonic plate that lies under the Pacific Ocean (and stretches for 103 million km²) carried these rocks north-west until it collided with the ancient supercontinent of Gondwana that later broke apart into Africa, India, Australia, South America and Antarctica. The force of the collision forced one plate underneath the other, creating what’s known in geology as a subduction zone and causing colossal geological upheavals like earthquakes and volcanic eruptions.

The immense pressure and temperatures of 400 degrees Centigrade folded the rocks in the subduction zone into contorted zig-zag or ‘chevron’ patterns that are seen in the Glasshouse Rocks on Narooma beach today.

Here is what to expect from the walk along Narooma surf beach among the ancient rocks.

How to get to the Glasshouse Rocks

First, you’ll need to find your way to the beach. The trail to Narooma surf beach starts in an unexpected fashion – at a cemetery. To be fair, it is a very picturesque cemetery perched on top of the headland with expansive views of the ocean.

To reach it, drive south from the centre of town along Princess Hwy and then turn onto Glasshouse Rocks Road and follow it to Narooma Cemetery (Google Maps pin). Once you parked, walk south-east (the ocean is your east) across the cemetery towards the forest on the edge of the cliff. Once you walk past the section of the cemetery where the tombstones are turned towards the ocean (with their backs to you), you will see a white fence and a trail heading downhill just past it.

Follow this trail until you come to an intersection with another rougher trail. Turn left onto this smaller trail and follow it to the beach. It is a little steep in places, but nothing too difficult. When you emerge on the beach near the northern headland, make sure to note where the trail enters the beach so you can find it on the way back.

The most striking rock formation on the beach, in my opinion, is the chevron folded rock, locally known as the Kangaroo Rock. It juts out from the headland onto the beach about halfway along the beach and it is unmissable.

You can clearly see how the sedimentary layers that make up this rock have been squeezed into a zig-zag, or chevron, pattern. Can you imagine the tremendous force it would have taken to fold layers of solid rock like that?

The forces that shaped this rock and the time scale of that event are entirely incomprehensible. You can see the striking chevron pattern on other rocks on Narooma surf beach, but not as dramatically as on Kangaroo Rock.

As you walk along the beach, keep an eye out for the local wildlife. We had a flock of Sooty oystercatchers that kept landing just ahead of us only to take off again with piercing cries once we came too close. Eventually, they accepted the fact that we would keep coming and flew over the headland.

You can see the Glasshouse Rocks towering in the distance as soon as you step on the beach. They are the towering vertical formations rising out of the ocean close to the shore.

The Glasshouse Rocks are the best example of Narooma Chert – that dark, hard, fine-grained sedimentary rock that was deposited on the bottom of the Pacific Ocean 490 million years ago, around the time when life was nearly oblitirated from Earth.

The chevron folding can also be seen in the parts of the Glasshouse Rocks if you look closely. These rocks were flipped vertically when the two tectonic plates came together.

The rocky reef in front of the rocks is made up of pillow lava, most likely the result of an undersea volcano eruptions around 490 million years ago. According to the Geological Sites of NSW website, “when lava from these eruptions was cooled quickly by the ocean it formed pillow shapes: as the outside hardened and then filled and burst, the fresh molten lava within then spilled over to form another pillow”.

As you walk south along the beach, you discover more striking formations, all bearing signs of having survived eminence planetary upheavals. The contorted lines on these rocks give you a sense of the cataclysmic events that formed them.

At the southern end of the beach, another rock formation rises out of the ocean. These rocks don’t appear as tortured as the others, but the fact that they are standing here suggests that they arrived by way of tectonic plates movement as well.

Just beyond these rocks the beach ends. It may be possible to walk further through the large crack in the headland at low tide. But I walked as far as I could until the ocean cut off my path.

The tide was coming in, the wind was blowing a gale and the southerly swells were quite rough, so it was a good time to turn around.

There are, of course, many other striking geological formations along Eurobodalla Coast and two of them are vertically next door.

Just a few kilometres away, at Narooma’s waterfront, the region’s most famous rock formation – the Australia Rock juts out from the cliff face. An eroded hole in the middle of this rock bears an uncanny resemblance to the shape of Australia (minus Tasmania).

Now that you know what Narooma chert looks like, you can easily recognize it in Australia Rock. This rock formed long before Australia came into existence.

Slightly further away, 33 kilometres north to be precise, you find the striking Blue Pool in Bermagui. Unexpectedly, the Blue Pool is actually green, which probably makes it even more striking in contrast to the ocean’s blue. This natural rock pool is an unexpected gem in a fairly underrated location – just outside of the small coastal town of Bermagui. Check my guide to things to do in Narooma for details on visiting the Blue Pool.