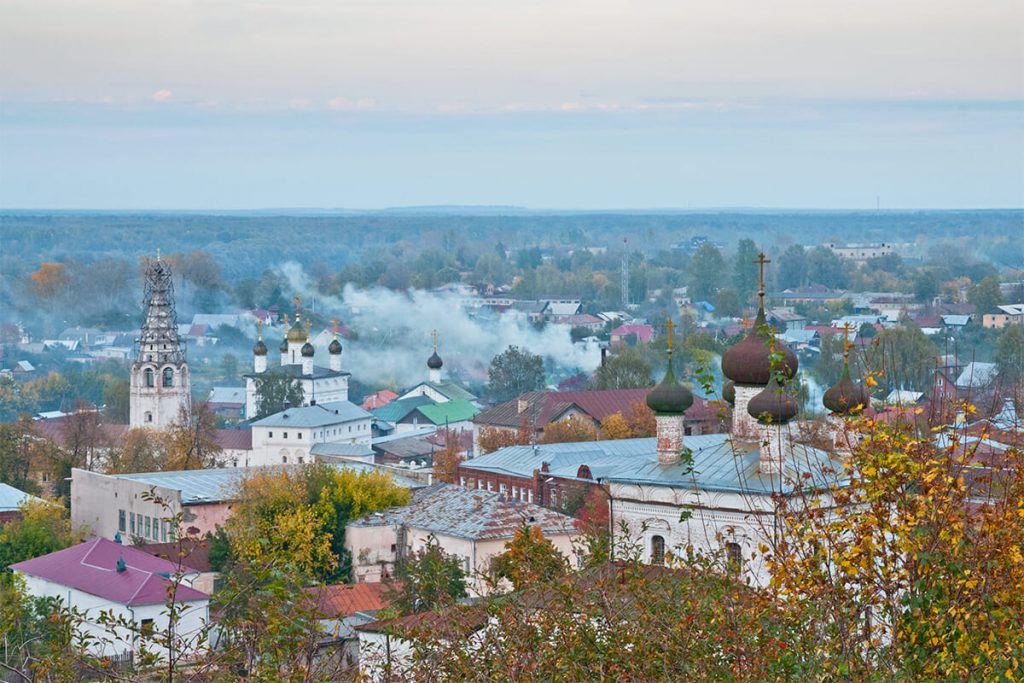 Having explored most of historic Moscow my friend and me decided to go on a historic day trip from Moscow and visit one of the small, out-of-the-way traditional old Russian towns. People ‘in the know’ suggested Gorohovets as a perfectly preserved provincial town, that traces its origins to the time of Catherine the Great. So Gorohovets it was.

We booked a bus tour that would take us on a day trip to this little town in Vladimir district, 330 km west of Moscow, way past the line where the civilization is said to end.

In this post hide
1. Moscow’s infamous traffic jams
2. Sightseeing in Lakinsk
3. Stepping through time in Gorohovets
4. The living movie set
5. More on Moscow

Considering Moscow’s infamous traffic jams, that routinely stop the flow of traffic in the city for hours on end, the bus was scheduled to depart at 7 am. Which unfortunately meant that I had to leave my house at the ungodly 5.55am. Thankfully, most of Moscow’s motorists seemed to be asleep at this hour and we made the trip with some time to spare.

The bus arrived and we all happily loaded in. After about 2 hours (and all of 20km) we finally crawled out of Moscow as we drove past an elite military academy from which the tanks drove into Moscow during the 1991 revolution.

The bus sped up and started to sway gently as it was eating up the kilometres towards Vladimir. The tour guide began telling stories about Russian history in a disengaged and sleepy voice; the view out of the window was of uninterrupted forest for as far as the eye could see; in short – it was impossible not to fall asleep.

We woke up for a pleasant rest stop in Vyazniky to get some much-needed coffee, which for some unique Russian reason was sold from an automatic dispenser at the entrance to the toilet block.

There was also a hotel there with a sign at the front listing important information for the guests. The first item on the list was the procedure for calling an ambulance. Curious. But since we were not planning to stay there I fought off the temptation to inquire about the reasons for such prominent location of ambulance visits on their suggested ‘to do’ list.

From Vyazniki the road was clear and it seemed that we were travelling pretty quickly. However, in the first 6 hours of the journey, we only managed to cover 176 km. According to the itinerary we had only 1 hr of travel time left when unexpectedly we hit a traffic jam in Lakinsk town.

How does a traffic jam form in a town with a population of 67 including pets? However it happened, we spent 2 hours sightseeing on Lakinsk’s main (and only) street from the bus window and finally arrived in Gorohovets at 4pm – 2 hours late.

Stepping through time in Gorohovets

As soon as our bus drove into town, I realized it was worth the arduous journey to get here. In Gorohovets traditional architecture is not simply preserved here and there, it is all there is.

The narrow streets are lined with traditional wooden commoners’ houses, most of which are cute as a button. Among them stand the perfectly preserved merchants’ two-story stone mansions that are hundreds of years old.

And whichever direction you look in, you can see multi-coloured domes of churches and monasteries.

In most other old provincial towns in Russia whatever is left of their heritage is overshadowed by the grey and oppressive post World War II buildings designed to ‘house the masses’. Gorohovets somehow avoided the common fate and stayed preserved almost exactly as it was during the rule of Catherine the Great.

Gorohovets really is an old town. The first historical record of it dates back to 1158. It came to its peak in the XVII century when it became the regional trading centre. The merchants became wealthy, donated money on the building of numerous churches and monasteries and built beautiful and original stone mansions for themselves.

Back then, wealthy people did not aspire to build monumental houses that would impose on the town’s architectural design. Instead, they built homes as beautiful as masterpieces of art, that blended with the existing cityscape around them and improved the overall aesthetic appearance of the street.

In 1875 a railroad was built between Moscow and Nizhnii Novgorod that completely bypassed Gorohovets, the town began to decline and remained virtually unchanged ever since.

Thanks to its traditional ‘look’ Gorohovets became a popular filming location for Russian cinematographers. Nikita Mihalkov’s Утомленные солнцем 2  “Exhausted by the sun 2” (2010) and Солнечный удар  “Heatstroke” (2013) were both filmed here.

The set decorations for the Heatstroke could still be seen on the main square – the filming finished a week before our arrival.

So for a look at real Russia, take a historic day trip from Moscow to Gorohovets with Travel Shop tour agency and you will return feeling like you’ve not only seen the different side of Russia, but also a different era.