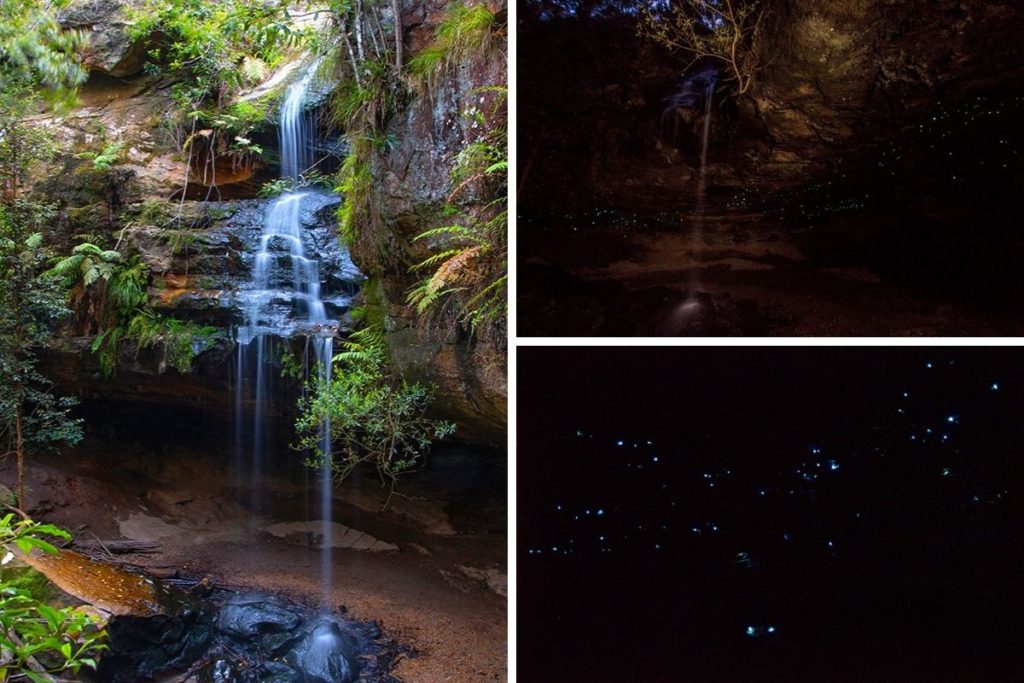 The waterfalls along Horseshoe Falls walking track are not your every day falls either. You can walk behind three of them (Fairy Falls, Horseshoe Falls and Oakland Falls) and Burgess Falls at the end of the trail are simply idyllic. And the best thing is – the trail doesn’t get busy even on weekends and the public holidays so you might just find yourself alone at most of the waterfalls. And if you do want a map, maps.me app shows all six waterfalls and the carpark (more on this at the end of the post).

Track at a Glance

From the carpark on Oaklands road, the trail ducks into the bush and follows a small creek. The trail is a bit of an obstacle course of rocks and roots, but nothing dramatic at this point. After about 200 meters, you reach a picnic table and a fork in the trail. Take the trail veering left, the one with a small sign that reads ‘Waterfalls’.

Another couple hundred meters down the trail you come to another intersection. Follow the sign to Horseshoe Falls. This is where the trail gets a little rougher as it descends to the waterfalls.

The first waterfall along Horseshoe Falls walking track is not named even on my magic maps.me app. Locally it is known as Fairy Falls and you can see why. From the bottom of the falls, it looks nice enough, but the best section of this waterfall is behind it.

To get there, follow a narrow trail up the side of the rock wall, and then pull your best ‘crouching tiger’ moves to shimmy under an overhang that leaves an opening of only about half a meter high. It is absolutely worth the effort though. Behind the waterfall, you can stand up to your full height and look at the world around you through the veil of falling water. It is a very scenic spot.

From Fairy Falls you don’t have to climb back up to the main trail. There is another trail that runs along the creek line to Horseshoe falls.

After a few minutes you reach Horseshoe Falls and a signpost pointing toward Glow-worm Nook Falls (just beyond Horseshoe Falls) and Oakland and Burgess Falls in the opposite direction.

As soon as you see Horseshoe Falls you’ll understand how it got its name. There is a large horseshoe-shaped cave behind the waterfall with the trail running through it. When the trail emerges from the cave it climbs up sharply along the rock face and disappears out of view.

The area around the falls and the small pool in front of it is encased by tall rock walls and dense forest so the setting is very secluded.

Horseshoe Falls is a very special waterfall because it is home to a colony of glow worms. This is the main reason my friend Jasmin and I came to Hazelbrook – to see and hopefully photograph these unique bioluminescent insects that light up the night like a starry sky.

But that would come after sunset. First, there are four more waterfalls to explore!

Once you are done at Horseshoe Falls keep following the trail that climbs up the rock face on the other side of the waterfall. It is quite a steep, but short climb to Glow-worm Nook Falls. Judging by the name of these falls, you can see glow worms here as well, but the trail would be quite treacherous in the dark.

Glow-worm Nook Falls is the least impressive of the six waterfalls, in my opinion. The creek drops from a rock ledge and then cascades down the rocks in two spots: the upper and the lower cascades. The lower cascades are the most photogenic part of these falls.

From Glow-worm Nook Falls retrace your steps to Horseshoe Falls and take the trail to Oakland Falls. This part of the track travels through a beautiful eucalypt forest for about 300 meters.

About halfway along the trail, there is an unmarked trail running towards the creek and another waterfall that you can hear from the trail. This is Lena Falls. The bank of the creek is very high here and there is no path all the way to the creek. I think you could see this waterfall from the bank in the past because I saw images of it online (and that’s how I learned that it’s called Lena Falls).

At the moment, though, the vegetation is too thick and you only get partial glimpses of Lena Falls. They are not as striking as the other falls along Horseshoe Falls walking track.

When you come to the signposted turnoff to Oakland Falls, it is another steep and rough trail down to the waterfall. It’s fine for agile walkers but anyone with wonky knees or ankles should take it slow and easy on these trails.

There is also a large pile of tree branches at the bottom of Oakland Falls that adds a wild feeling to the area. A friend who lives in the mountains told me that these branches were brought down here by the recent floods in the mountains.

While I was sitting on a rock photographing the falls, a male lyrebird flew in and started scraping in a patch of leaf litter at the base of the waterfall. Of course, my camera was set for slow-motion photography and while I fiddled with the settings the bird caught onto the fact that it wasn’t alone and hastily retreated, leaving me with a couple of blurry images.

The next and the last waterfall is Burgess Falls and again, you don’t have to climb back to the main trail. Instead, follow a signposted trail alongside the creek. This part of the walk has a more rainforest-like feeling to it. The large boulders in the creek bed are coved by green moss and algae and the vegetation is dominated by moisture-loving ferns.

Burgess Falls is an idyllic surprise at the end of the trail. They flow along a mossy rock face and cascade down some rock shelves at the bottom into a small pool. The trail ends at a large flat rock that you can watch the falls from. But if you would like to get closer to the falls, you can take a bit of a scramble over the boulders in the creek.

Burges Falls is the last stop on Horseshoe Falls walking track, so once you are ready to continue, retrace your steps the way you came. And if you are staying for glow worm watching adventure, you only have to walk as far as Horseshoe Falls

The day Jasmine and I visited Horseshoe Falls, the sun set at 6 pm and by 6.30 pm we could see hundreds of bioluminescent bottoms all along the cave wall behind the waterfall. The worms seemed to like the midline of the cave wall and arranged themselves into a twinkling band about halfway between the floor and the roof of the cave. They arrange in a similar pattern at Lithgow Glow Worm Tunnel as well.

Despite the full moon, the cave and the surrounding forest were pitch black. Even standing right next to the waterfall I could see it, which felt quite surreal since i could hear it and feel the spray on my face.

The utter lack of natural light made photography quite challenging. Bright light disturbs glow-worms so using a torch is out of the question. So after experimenting with a few different settings, I decided to use the same technique I use for photographing the Milky Way. I can’t say that my images turned out all that great, but they convey exactly how the scene looked to the naked eye.

Here’s how you could photograph glow worms in complete darkness

This is far from a definitive guide to glow worms photography, but it is one way that worked for me.

Jas, on the other hand, spent the time experimenting with painting with light – shining some dim light onto the waterfall and the surrounding rocks. And here is a cracker of an image she managed to capture

What are glow worms?

Well, glow worms are not actually worms. They are the larvae stage of a flying insect closely related to fireflies. But while fireflies also occur in Asia and the Americas, as well as Australia, glow worms only occur in Australia and New Zealand.

Most glow worm colonies live in caves and tunnels, but some can be found on rock walls next to waterfalls. To trap their insect prey, glow worms make fine spiderweb-like threads, with droplets of sticky liquid and use their bioluminescent bums to attract the insects to them.

If you are as keen as I am on glow worms, check out my guide to finding fireflies and glow worms in the Blue Mountains.

Walking back to the carpark at night

The walk back at night is another adventure. You can use you torch for walking out of the cave, just make sure not to shine it at the worms. The climb back to the main trail is an interesting experience, but it is not too hard. You just take your time on the steep and uneven ground. And once you are on level ground, it is a very pleasant nocturnal walk through the bush. It’s only about 500 meters so it’s not a long walk.

How to get to Horseshoe Falls, Hazelbrook

As I mentioned, Horseshoe Falls walking track and its waterfalls are ignored by most travel guides and popular maps. Google maps don’t show the track but show one of six waterfalls (Horseshoe Falls). The best map I found for this walk is Maps.me. It shows the carpark on Oakland Road and all six waterfalls.

Drive: The drive from Sydney to Hazelbrook takes about 1hr 10 min. You can park at an unmarked carpark next to the intersection of Oaklands Road and Hall Parade. This car park is not marked on Google Maps, but it is on Maps.me (see below).

From the car park, walk along Oaklands road for a few meters past fended off creek and you will reach the signpost at the start of the walk.

Train: The train from Central to Hazelbrook takes about 1.5 hrs and the walk from the train station to the start of the trail on Oaklands drive is 1.4 km, so should take 15-20 minutes.

More things to do in the Blue Mountains

How to explore the Blue Mountains by train