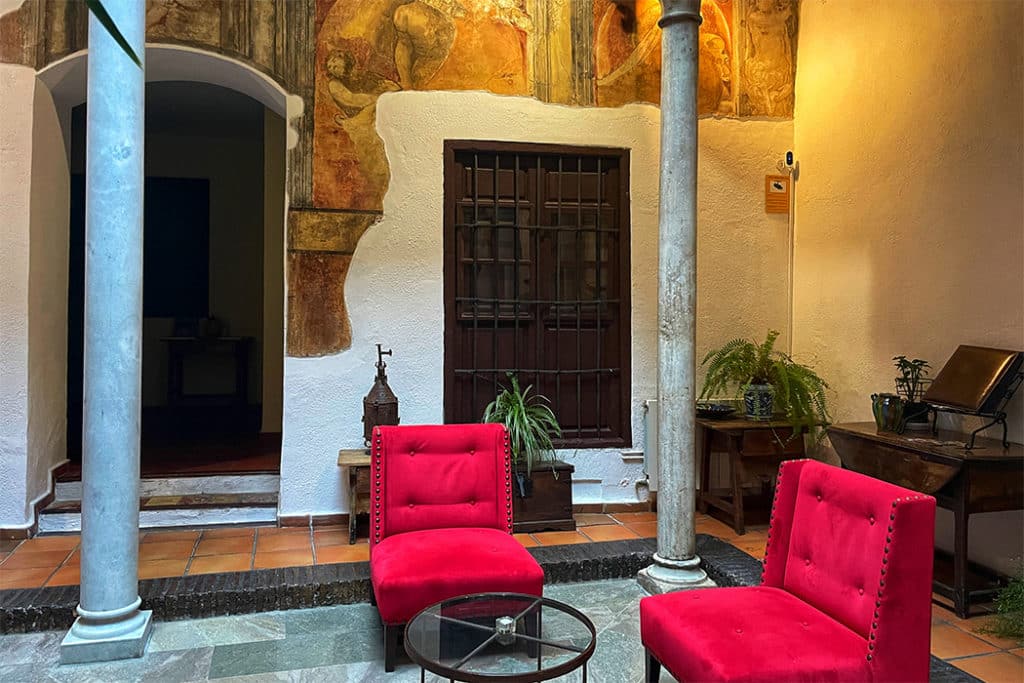 Once the capital of the Moorish kingdom, Granada is filled with gorgeous hotels. From charming renaissance palaces and Moorish mansions to slick 5-star establishments. But choosing one could be overwhelming unless you have a personal recommendation. And this is what this guide offers: personal recommendations from frequent travellers for 5 gorgeous hotels in Granada.

Whether you are looking to wrap yourself in history and comfort or prefer a charming hotel that won’t break the budget, we’ve got you covered.

Spanish Paradores are a network of 97 state-run hotels (96 in Spain & 1 in Portugal) located in historic buildings. These are marvellous properties consisting of restored castles, fortresses, monasteries, mansions, and palaces.

Where would you place a historical hotel in Granada, if not inside the exquisite Alhambra complex? Parador de Granada is housed in the 15th-century monastery that has beautiful views across Generalife gardens. Every bedroom in the hotel has a view of one of the historical buildings that make up Alhambra.

This building was originally part of a 14th-century Nasrid palace and mosque. You can see some relics from the palace preserved in the Parador’s Nazarí Room. Later, in the 15th century, it was converted into a monastery by the order of King Ferdinand and Queen Isabella. There is a chapel here where Queen Elizabeth was originally buried, awaiting the completion of the Granada Cathedral and the Royal Chapel.

The hotel exudes the same magic as the Alhambra and it lets you experience it without the crowds. You can spend your evenings in the gorgeous Renaissance-style courtyard filled with flowers and gurgling fountains or on the open-air terrace with stunning views of Alhambra all the way to the Sierra Nevada mountains.

Another gorgeous hotel with stacks of character and Alhambra views is Casa Morisca – one of the most charming Moorish-style hotels in Granada.

This is no bland chain hotel. Casa Morisca is housed in a 15th Century property that has been painstakingly restored by Carlos Sánchez, a local architect. The hotel’s showstopper is its exquisite central courtyard, complete with the original alberquilla (small pool) and terracotta and turquoise tiling.

Different room types are available but it’s worth splashing out on a room with a balcony to enjoy the view of the Alhambra Palace. All of the hotel’s 14 rooms combine original features and antique furnishings with modern facilities, including air-conditioning and an in-room safe.

Parking is available right outside the front door – rare in Granada –  subject to availability and prior reservation.

Visiting the Alhambra Palace from Casa Morisca couldn’t be easier.  The hotel is located at the foot of the Albaicín, a stone’s throw from the Cuesta de Rey Chico, the footpath that winds its way to the main entrance to the palace complex. (it’s a 10 – 15-minute uphill climb).

Recommended by Bridget of The Flashpacker

Located just at a distance of 400 metres from Alhambra, Eurostars Washington Irving Hotel is situated in the heart of Granada. The hotel features a sun terrace and an outdoor pool with a free WiFi network throughout.

What makes the hotel unique is that it is close to the attractions of the city and bustling dining options. Over that, the unique decor of the hotel is inspired by the author Washington Irving. Every single room of the hotel features heating, air conditioning, private washrooms and marvellous views of the city.

The modern styling and the convenient location make the hotel worth staying at. The sleek interiors and over-the-top corridors, and a pool on the rooftop are some of the exotic features of this hotel. You will see some famous Granda quotes written all over the cozy corridors.

After your visit to the hotel, you will be able to feel the exquisite services. The pool is the perfect spot to gaze out the marvellous walls of Alhambra. You’ll also enjoy the perfect steam room and a small gym that overlooks Carmen de Los Martires gardens.

For the mood-lightening and laid-back weekends, the hotel also organizes live guitarist performances over breakfast. Wondering what to eat in Granada? Enjoy Andalucian food at the in-house restaurant and stylish wine bar.

The best part is that you can specify your requirements for the room at the time of booking. In case you love views, the hotel can provide the right room with a breathtaking view.

Recommended by Paulina from Paulina on the Road

Located in the 16th-century Mudejar-style palace, one street back from Carrera del Darro – Granada’s most romantic street, Palacio de Santa Ines Hotel is one of the most charming historical hotels in Granada that won’t break your budget.

It takes up two buildings, in fact, so you can choose between the more economic wing and the one with Alhambra views. And while the rooms in the second wing may not have Alhambra views, they have charming mezzanines with spiral stairwells of wrought iron. They are essentially two-story apartments.

The hotel’s lobby, in particular, makes you feel like you are in a Renaissance palace. The sections of the original walls preserved in the lobby, the columns, and stately furniture give the place an air of opulence and history.

The staff will happily store your luggage if you arrive before check-in and call you a taxi when you are ready to check out. As to exploring the old town of Granada, all you have to do is step out of the hotel and you are there.

Barcelo Carmen is a great four stars hotel in the centre of Granada. The rooms are airy and spacious, some of them overlooking the old town of Granada and the main road C. Acera del Darro. The rooms are soundproofed, so you don’t have to worry about hearing noise from the outside.

The hotel offers underground parking to their guests, which is a plus because traffic in the old town of Granada is restricted unless you stay at one of the hotels inside the closed perimeter. Barcelo Carmen features a rooftop pool, as well as a lovely bar from where you can see the Alhambra and the peaks of the Sierra Nevada mountains.

Staying at Barcelo Carmen is very affordable, with prices starting at 60 euros a night. The staff is very attentive and if you are celebrating a special occasion and let them know, they will leave a bottle of cava in your room. Barcelo Carmen is the perfect choice for a weekend break in Granada.

Recommended by Joanna from Andalucia in my Pocket