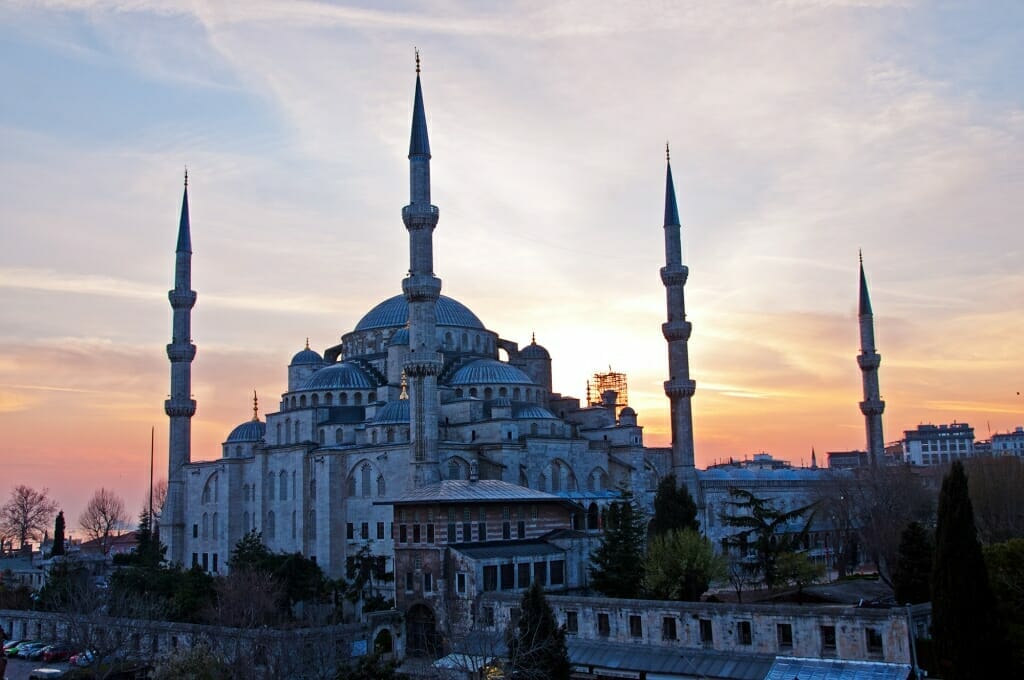 If the Earth was a single state, Istanbul would be its capital. – Napoléon Bonaparte.

There are cities in the world that you can love before ever seeing them. For me, Istanbul has been such a place. An ancient metropolis lying at the crossroads between Europe and Asia and straddling both continents, it saw the rise and fall of two great empires – the Eastern Roman and the Ottoman.

It survived through the centuries to become an enigmatic fusion of eras and cultures – a history’s playground where orthodox churches stand adorned with minarets, Ottoman palaces enclosed by Byzantine walls and highways run through ancient Roman aqueducts. This city has been capturing the imagination of travellers for thousands of years.

One of the things Istanbul is famous for is that it is the only city in the world to straddle two continents. The mighty Bosphorus cuts the city in two halves – its European and Asian sides.

The European side is further divided by the Golden Horn, which separates the Imperial stronghold with all its Byzantine and Ottoman palaces from what a friend of mine calls the Crusader part of the city – the lands that historically were given to foreign communities: the Genoese after the IV Crusade and the foreign embassies during the Ottoman rule.

I arrived at Istanbul’s Sabiha Gokcen airport on the day of the terrorist attack on Istiklal Caddesi. I knew that the city was on high-security alert due to the Kurdish celebrations of the Persian New Year, but the news still came as a shock. Five people were dead, dozens injured. What a way to celebrate.

Despite my best efforts, I felt a fair degree of apprehension. But the locals refused to feel terrorized and while it felt quite hard-hearted, I tried to keep my mind fixed on the sights of the city instead, which in Istanbul is not a hard thing to do.

The drive from the airport took me from Asia to Europe across the Bosphorus Bridge and then past the dreamy-white Dolmabahce Palace and the immediately recognizable Galata Tower, across Galata Bridge and onto Kennedy Avenue. We drove along the broken line of the Byzantine Sea Walls, through an ancient gate and onto the cobbled streets of Sultanahmet – the heart of the old city.

Istanbul is one of those rare cities, where the drive from the airport to the city centre is an epic scenic excursion. So even if you have a few hours layover in Istanbul, you can take this opportunity to see the highlights of the ancient city.

The Heart of the Old City

Twenty minutes later I was standing in Sultanahmet Park gawking in amazement at the Blue Mosque and Hagia Sophia – two colossal giants gazing at each other across the park, one – a thousand years older than the other. The Blue Mosque, in particular, took my breath away.

There is something almost unearthly about the shape of its domes. They seem to unfold into existence right in front of your eyes, like the constantly changing shapes of a geometric gif image.  I was immediately in love with Istanbul, mesmerized by its old soul and spellbound by its beauty.

Walking the streets of Istanbul is like walking through layers of history, wondering between the Roman Empire, Ottoman Empire, medieval Europe and the modern world. Part of Istanbul’s magic lies in its ability to keep surprising.  It leaves so much room for exploring.

Use this suggested guide to exploring Istanbul by eras, from the Roman Empire to today’s Turkey Republic to create your own Istanbul itinerary. By concentrating on different historical periods reflected in the city’s architecture, you will visit three different cities and three distinct epochs. Follow links to the related posts under each ‘era’ to find more details about exploring different sides of the city.

The oldest structures in Istanbul that can still be seen today date back to the Eastern Roman Empire, aka the Byzantine Empire.

The Eastern Roman Empire became known as the Byzantine Empire and has outlived Rome by centuries.

For much of its history, Constantinople was the most magnificent city in the ancient world. You can still see some of its structures and appreciate the scale on which they were built.

The defensive walls still circle the old city, Aya Sophia that was the biggest church in the world for over 500 years still towers over Sultanahmet, Valens aqueducts still span the valley and Basilica Cistern still remain almost intact.

Check out this post for ideas on where to find the remnants of Constantinople in Istanbul and how to explore the ancient city on your walks around Istanbul.

The Fall of Constantinople

For centuries Constantinople’s defensive walls kept the city safe from the attacks by the invading armies. Until a Hungarian engineer invented cannons and outfitted the Ottoman army with his formidable new weapons.

Led by Mehmed II the Ottoman army besieged Constantinople for months, wearing down its walls by the constant barrage of cannon fire.  Yet Constantinople still stood. Until someone left the small Kerkoporta gate in the Land Walls open and the Janissaries (the elite Ottoman soldiers) used it to enter the city and open the main gate for the invading army.

On 29 May 1453, Constantinople fell and the era of the Ottoman Empire began.

The Ottoman Empire grew into one of the most powerful and most long-lasting Empires in the history of the world. It reigned over much of the Middle East and parts of Asia and Europe for almost 600 years. Most of the architectural heritage of Istanbul belongs to the time of the Ottomans.

The magnificent Topkapi Palace is the perfect place to get a taste of the opulence of the Ottoman lifestyle.

Suleiman favoured the arts and commissioned the best architect of his day, Mirmar Sinan, to design a number of royal mosques throughout the city.

Check out this post for details about the Greatest Mosques in Istanbul and other structures built during the Ottoman Golden Age.

To get a bigger picture of the Ottoman legacy, take one or two-day trips from Istanbul to places like Edirne, Izmir and Bursa.

In 1923, the Republic of Turkey was founded and the capital was moved to Ankara. Seven years later, Constantinople was officially renamed to Istanbul.

To explore modern-day Istanbul head to the quirky cafes and fashion boutiques dotting the Pera neighbourhood and Istiklal Caddesi, Orhan Pamuk’s Museum of Innocence or Istanbul Museum of Modern Art, both in Beyoğlu. Or combine the best of all worlds and have dinner on the rooftop restaurant of the Blue Hotel in Sultanahmet and enjoy the panoramic views of Aya Sophia and the Blue Mosque.

Istanbul is such a melting pot of cultures, religions and architecture that it is difficult to separate the intricately intertwined remnants of the former empires. But with a bit of effort, it is possible to concentrate on one era at a time.

Everyone will have their own Istanbul. Mine is a walled city of domed churches and pencil sharp minarets. I tried to use the epic history of this magnificent city as a guide.

I spent hours wandering the city from one end to the other, exploring Istanbul by eras from the Roman Empire to the Byzantine to the Ottoman and the modern-day Turkish Istanbul.

There have been some excellent books written about the history of the city, that would be the perfect companions for exploring Istanbul. The book I would highly recommend is “Strolling Through Istanbul” by Hillary Sumner-Boyd and John Freely. It is a city guide intricately intertwined with Istanbul’s history.

Another great way to glimpse the true heart of Istanbul is by reading the wonderful novels by Orhan Pamuk. His love for the city comes through in all his writing.