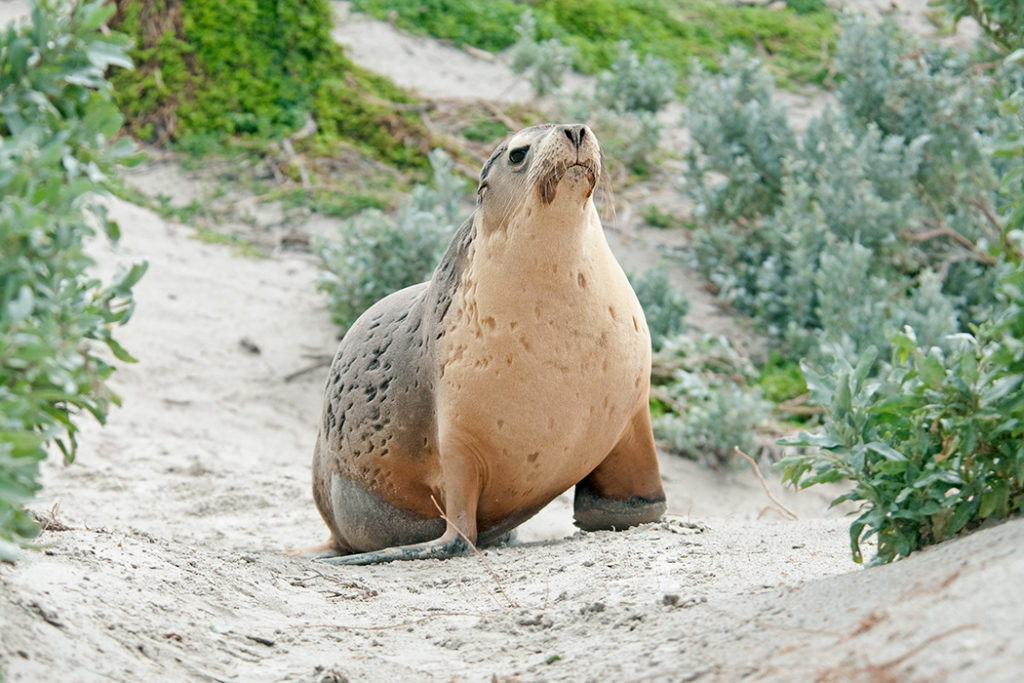 My first encounter with Kangaroo Island animals was the scene of two young male sea lions battling it out within about 10 meters of me, almost 15 years ago. The power and proximity of these magnificent animals left me speechless as my mind processed the awesome encounter.

Awe is defined as an experience of such perceptual vastness that it requires your mental maps of the world to expand in order to assimilate it. And it’s this expansion happening in real time that gives you the sensation of bliss, of goosebumps running down your spine.

Kangaroo Island is all about awe. From striking landscapes to close encounters with wildlife, Kangaroo Island will stay with you long after you leave.

Located just off the coast of South Australia and easily reachable from Adelaide, Kangaroo Island makes for a perfect weekend getaway.

So here’s a guide to Kangaroo Island animals that you can spot on your holidays, including some of my favourite images from several trips.

Probably the best-known wildlife attraction on KI is the colony of Australian sea lions at the Seal Bay Conservation Park. The colony is protected by the National Parks and Wildlife Services Department and to meet Kangaroo Island sea lions, you have to take a ranger-guided tour (check the times here).

The tour starts at the Visitor Center and meanders through the wind-blown coastal bush crisscrossed with tunnels made by sea lions. When it’s cold on the beach, the sea lions come up to the shrubs, where it’s much warmer than on the sand.

Down on the beach, you can watch the sea lions, doing what they do best (on land) – snoozing. Apart from the young males, that is. They often chase one another practising their moves for when the time comes to make their mark in the seal society.

Sea lions have extremely flexible hind flippers that can be rotated forward and beneath the body. This enables them to easily move on land, unlike the seals that appear quite clumsy out of the water.

The best time to visit Kangaroo Island sea lions is around July-September when the pups are born. During my last visit, in September, we were treated to the sight of two chocolate-brown pups giving themselves a swimming lesson in the surf.

Once the formal tour was finished, you can take a self-guided walk along an elevated wooden walkway. The lions don’t come as close to the path here, but you get fantastic vistas of the broader landscape and get a good sense of the lions’ world.

There is a huge whale carcass half-buried in the sand. Amazingly, it belonged to a juvenile humpback whale, not a fully grown one.

Not far from Seal Bay, is Cape du Couedic – home to Kangaroo Island seals. Their common name used to be the New Zealand fur seal, which was a misnomer because these seals are native to Australia. But since there is already a species named Australian fur seal, these guys were renamed the long-nosed fur seals.

Cape du Couedic is a far less hospitable spot than Seal Bay. The fur seals live at the bottom of wind-swept cliffs where the waves crash into the rocks with relentless ferocity. The waves and the wind are responsible for creating one of the island’s well-known geological attractions – a rock arch known as the ‘Admiral’s Arch’ down below where the rocks meet the ocean.

Seals and dramatic coastal rock formations seem to go hand in hand. Another well-known seal hotspot in Australia – Narooma, is also home to some very interesting rocks, like the famous Glasshouse Rocks on Narooma surf beach.

Kangaroo Island koalas were once considered a pest. Simply because there were so many of them on the island that conservationists believed they were negatively affecting the vegetation. But in the wake of the devastating fires of 2019-2020 Black Summer that ravaged the island, almost 40,000 koalas are thought to have perished. The remaining population of Koalas on Kangaroo Island is estimated at around 8500 individuals.

My most memorable encounter with a koala on Kangaroo Island happened during an Armageddon-like period of heavy rains, a couple of years before the fires.

Looking for a cozy place to escape the deluge, we came to Seal Bay Cottages and Café. I got out of the car and dashed for cover at the reception. Surprisingly my friend didn’t follow me. I poked my head out and noticed her gesticulating excitedly next to a large tree, under which we parked our car. Whatever it was that she was so excited about, it had to be good enough to stay out in the rain for. I jogged towards her getting my camera ready for action. “There’s a fluffy dude up the tree, but I can’t see what it is” she offered in terms of explanation.

The fluffy dude turned out to be a wet koala that had wedged its fluffy bum into the fork of the tree and tucked its chin into its knees. When we came back to the tree later, we saw what she was guarding – an equally wet but fluffy baby. When the sun made a brief appearance, they unfurled themselves and began munching the leaves with impressive determination.

Of course, wildlife heaven like Kangaroo Island would have its own type of kangaroo. Kangaroo Island kangaroo is a subspecies of the Western grey kangaroo. It is smaller, darker, and furrier than its mainland cousins.

Because they’ve been isolated on an island without any large predators, Kangaroo Island kangaroo are quite numerous (similarly to the white wallabies in Tasmania’s Bruny Island).

Their population is estimated to be around 65,000 individuals. That’s 14 times higher than the human population on the island.

Kangaroos are found throughout the island (so please make sure to drive carefully), but the best place to watch them is in Flinders Chase National Park at the south-westerly tip of the Island, particularly around the Rocky River grasslands. These grasslands are a great place to see a few other species of Kangaroo Island wildlife.

Like the kangaroo, Tamar wallaby can be found all over the island, but the Rocky River grasslands are the best place to see them. The wallabies are much smaller than the kangaroo, so they won’t be difficult to tell apart.

You can often spot them around the Park Headquarters and Visitor Centre, where they are accustomed to people and will often remain out in the open, so you can observe them from a close range.

You can come across echidnas practically anywhere on Kangaroo Island. The more time you spend walking around, the higher your chances of finding them.

The best time to see echidnas is around October, during their mating season when you can see a female followed by a string of males in what’s known as the ‘echidna train’.

Naturally, the wildlife watching opportunities on KI do not end after the sun had set. The ferry port of Penneshaw is home to the breeding colony of the world’s smallest penguins – appropriately named the Little penguins. Also known as Fairy penguins, these little birds spend their days hunting fish in the ocean and return to their burrows at night.

To see them, book a 60-min tour with Penneshaw Penguin Center. In the past, the penguins used the artificial burrows constructed for them along the coastline at Penneshaw, but now they seem to be more dispersed and it may take some walking around to locate them.

If you happen across the penguins on your own, make sure not to shine a bright light directly at them. As nocturnal birds, they are sensitive to light and will try to avoid it.

The best time to see echidnas is around October, during their mating season when you can see a female followed by a string of males in what’s known as the ‘echidna train’.

The Rocky River grasslands in Flinders Chase National Park are also home to the breeding colony of Cape Barren Geese – one of the world’s rarest geese.

At one point these handsome birds were heavily hunted which led to dramatic population reduction. The birds were introduced to Kangaroo Island in the 1920s and the island’s population is quite tame and can be easily viewed and photographed.

They can also be found at Murray Lagoon, accessed via Seagers Road, and grazing in the paddocks on the Wisanger salt pans. To avoid disturbing the birds, it is best to view them from a comfortable distance of around 20 – 30 metres.

The Black Summer fires destroyed much of the birds’ nesting trees and food trees, yet amazingly In 2021, 377 glossies were counted on the island.

Chances are you will hear them before you see them. Like all cockatoos, they have a loud conspicuous call.