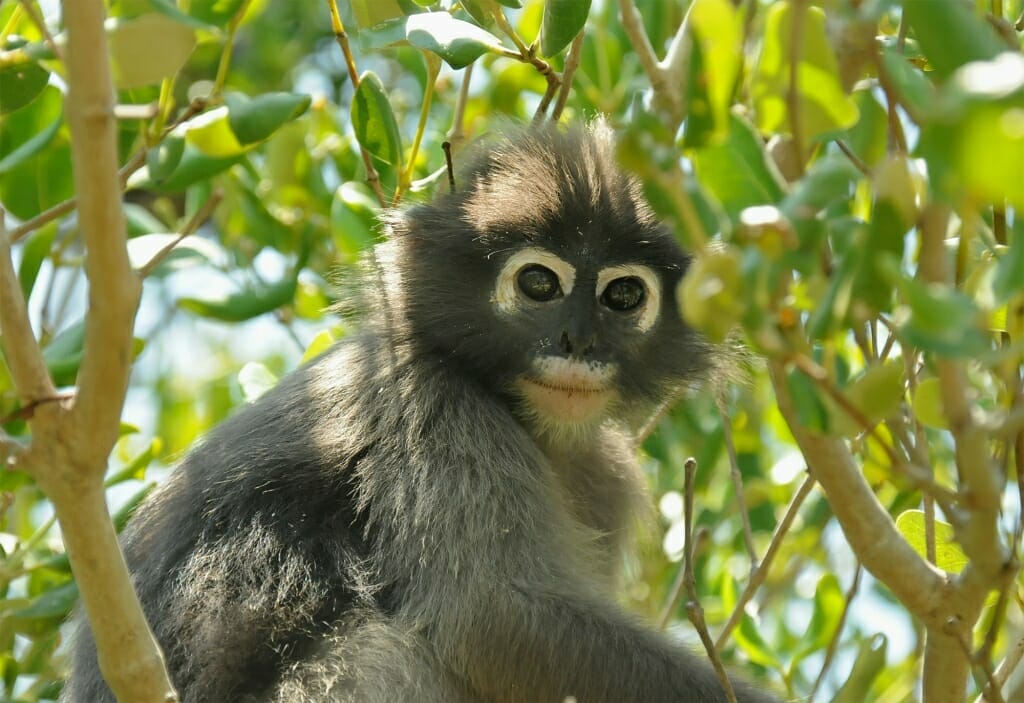 Once we got there we took a walk along the mangrove walkway by the park’s headquarters. The mangroves turned out to support quite an impressive array of wildlife.  Right by the headquarters, there was a group of the Crab-eating macaques, also known as the Long-tailed macaques.

Just like their pig-tailed cousins in Khao Yai, these are bold animals that can be quite aggressive towards humans, especially when there is food involved.

One of the females with a young clinging to her body was being harassed by a couple of juveniles and as she was chasing them off, she lost her grip and plunged into the water off the walkway. She emerged moments later looking rather cross, her frightened young holding on to her for dear life.

We were keen to see a different primate, however –  the famous Dusky langurs of Khao Sam Roi Yot. Also known as Spectacled langurs these handsome primates are quite easy to see in the park.

We came across a family of langurs about halfway through our walk. We first spotted them up on the cliffs that surround the wetland and then watched them come all the way to the mangroves fringing the boardwalk.

The birdlife was characteristic of a mangrove habitat: Collared Kingfishers, lots of Great and little egrets and we spotted a Purple Heron at the very end of the walk.

The waterway was inhibited by bizarre-looking mud-skippers and at least three different species of crabs including a Fiddler crab with its oversized claw.

We camped at Hat Sam Phraya beach, which was also quite rich in birdlife. There were a few species of waders feeding in the shallows: Kentish plover,  Mongolian sand plover, lots of egrets including a Pacific reef egret.

It was quite amazing to see the stilts here after I watched them in Australia a few months ago.

In the afternoon, around 4 pm we took a boat ride along the Khlong Khao Daeng waterway. It was a great way to explore the mangroves.

Back at the pier, we saw some Long-tailed macaques in front of the spectacular temple that was framed by limestone cliffs and was absolutely deserted at that time.

The only addition to our first day of wildlife watching experience was a Tockay hiding in the leaf litter at the campsite. I’ve put out a few Elliot traps around the camp but didn’t catch anything on either night.

On our second day at the park, we decided to explore Thung Sam Roi Yot – a vast freshwater wetland that’s supposed to be good for waterbirds. Unfortunately, the only birds we saw were a Bronze-winged jackana, Purple Moorehen, a Chinese pond heron and a couple of ducks that were too far to see them clearly.

The marshes were overgrown with thick tall grass, decreasing the visibility to what was right in front of us and as luck would have it, there were no boats available for hire.

From Thung Sam Roi Yot we travelled to Hat Laem Sala beach and on to Phraya Nakhon Cave. The beach was quite heavily developed – not a good spot to look for wildlife. We saw a few Grey-bellied squirrels (Callosciurus caniceps) in the trees around the restaurant and a Butterfly lizard on the path to the cave.

The Phraya Nakhon cave is one of the most incredible caves in Thailand. It is so vast that there are patches of forest growing inside it. Even though the climb to the cave was utterly exhausting, it was well worth it in the end. The ancient ferns growing inside the cave gave it an appearance of a Jurassic Park movie set. We even saw some Dusky langurs playing on the rocks where the cave’s roof opened up to the surrounding jungle.

On the drive back to the camp we took a little detour along a dirt road towards the beach adjoining Hat Sam Phraya and saw a White-bellied sea eagle flying above our heads, carrying a snake in its talons.

A few meters down the road we spotted a Whimbrel feeding in the shallows.  Back at the campsite, Dusky langurs were taking turns drinking from the rainwater tank and a Northern tree shrew was scraping in thick undergrowth just underneath them.

We spent quite a bit of time driving around the shrimp farms around Hat Sam Phraya after sunset, as fishing cats are reported to occur in this area, but not surprisingly we didn’t spot any.

We did, however, see quite a few birds as we drove past the shrimp farms on our way back towards Hua Hin: Brown shrike, Chestnut munia, White-throated kingfisher, Blue-eared kingfisher, Green Bee-eater, Yellow-vented bulbul, Lesser Coucal, Asian Openbill stork, Cattle egret.

Bumblebee bats and other wildlife of rural Thailand