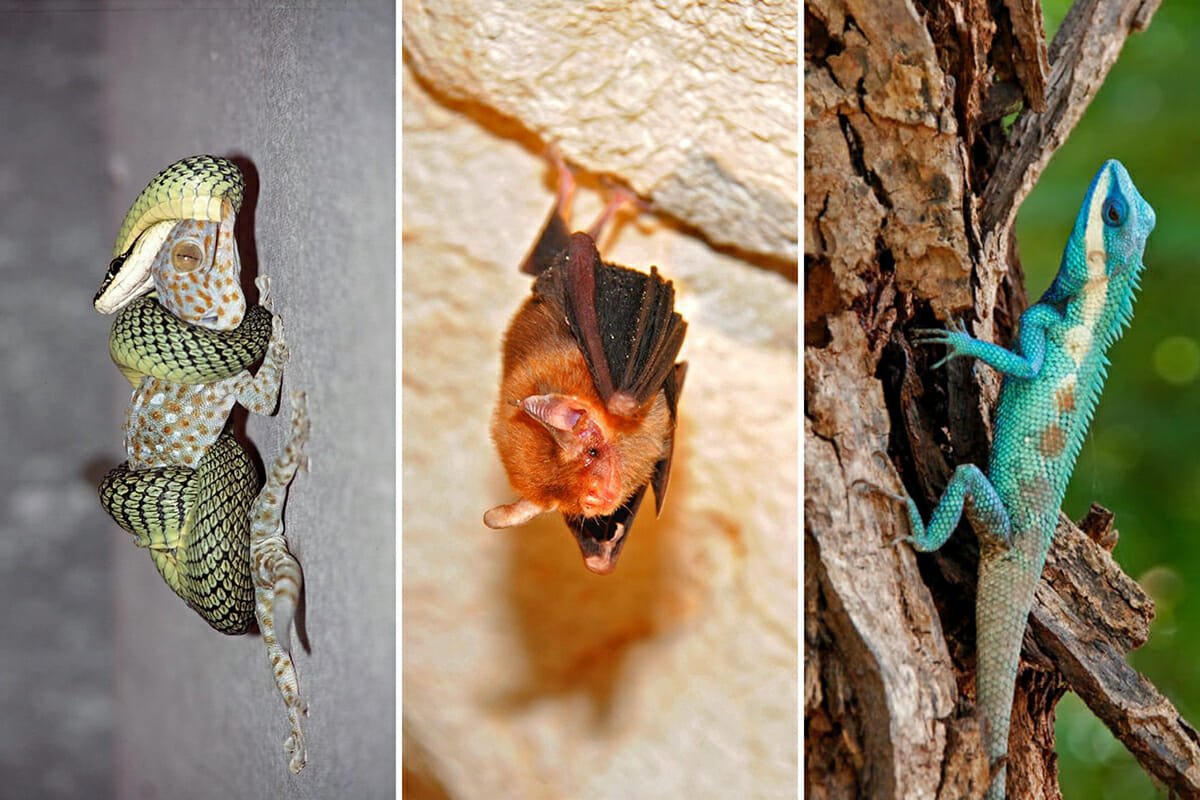 There is a cave in the forested mountains of Western Thailand, in the province of Kanchanaburi, not far from the Burmese border, where a lone Buddhist monk lives, spending his days pondering on the meaning of life. He is known to the local villages simply as the Old Abbot.

As prescribed by Buddhist tradition, the Old Abbot comes down from the mountain each morning, walking barefoot to the nearby village on his alms round. The villagers give alms – Abbot’s only source of food, and he chants a melodic blessing in gratitude.

Quite often, the villagers visit the Abbot on his mountain to pay their respect, ask for advice, receive a blessing or simply to relax in the tranquil setting of his cave ‘temple’. This is all business as usual in rural Thailand. What is not quite so usual is one of the neighbours that the Old Abbot shares his cave with.

In this post hide
1. Kitti’s hog-nosed bat
2. The roosting ecology of Kitti’s Hog-nosed bat
2.1. Migration
2.2. Foraging
3. Other residents of the bat cave
4. Mammals of the temple mountain
5. Birds of rural Thailand
6. Reptiles of rural Thailand
7. Hope for the future
8. Phu Ma Dang Cave
9. Stalactites and chiselled floor
10. Visiting Phu Ma Dang Cave
10.1. Getting there
10.2. Getting ready
11. More on Thailand wildlife and National Parks

For over four years, I happened to be living in the village that the Abbot visited on his alms rounds. I went to his cave quite often, and for me, it held a special interest. On my first foray into the cave, I discovered four bat species roosting in various chambers. And incredibly, one of them was the endangered Kitti’s hog-nosed bat (Craseonycteris thonglongyai) – arguably the world’s smallest mammal.

These species are only known from two caves in Burma and a few more in Kanchanaburi. They have an incredibly narrow distribution range. Also known as Bumblebee bats, these tiny creatures weigh on average 2 grams and grow to all of 3 cm in length.

The Abbot is a keen naturalist, and he has known about the bats for quite some time. Kittis hog-nosed bats appeared in his cave in late 2004.  Before that, the chamber where Kitti’s bats now live was empty, and the cave itself was occupied only by the three larger species.

Not much is known about Kitti’s Hog-nosed bat. When I first discovered the colony in the Abbot’s cave, it numbered approximately 100 individuals. But throughout the year, the numbers fluctuated quite dramatically, with the lowest counts in May-June.

In July, the numbers usually started to increase, which coincided with the appearance of the females carrying almost-grown young.  It is likely, that as soon as the females give birth in April, they migrate to a different chamber or even a different roosting site altogether and stay there for as long as they are lactating. Once the young are almost weaned the females return to their home chamber.

Similar behaviour has been observed in Mouse-tailed Bats – a relative of Kitti’s bats. I did spot a few individuals in the main chamber of the cave during the low-density period. It is possible these were some of the ‘missing’ females.

Another interesting behavioral pattern I noticed in Kitti’s Hog-nosed bat is that they don’t forage the entire night, but only emerge for two short activity periods: just after sundown and just before sunrise. On the mountain, the Old Abbot established some rudimentary infrastructure with the help of the locals, and one of the most impressive achievements is the rainwater reservoir.

It is big enough to swim in, and it serves as a good open space for bats to hunt at night. Kitti’s bats emerge around 6.40 pm (in late summer) and forage over the reservoir for no more than 40 minutes. The Abbot usually sees them early in the morning, between 5.50 and 6 am, but not at night.

It appears that these tiny creatures hold a number of secrets. They live in one of the world’s remotest and partly politically unstable regions. Maybe it will play out in their favor, and they will be spared the unnecessary attention.

Seeing them in that hidden cave on top of the mountain always gave me a feeling that I was witnessing something extraordinary, catching a glimpse of a world that exists beyond human awareness.

Other residents of the bat cave

Kitti’s bats a not the only residents that the Abbot shares his cave with. There are three other species of bats: Lesser false vampire (Megaderma spasma), Intermediate Roundleaf bat (Hipposideros larvatus) and Trident Roundleaf bat (Aselliscus stoliczkanus).

The lactating females prefer the low ledges in the main chamber for roosting and therefore easily observed. By August, however, Trident bats move up toward the roof of the cave closer to the larger Intermediate Roundleaf bats.

The Lesser false vampire bats live in a separate chamber, and I have never seen more than five of them at once.

The only obvious predator living in the cave is the magnificent Cave-dwelling snake (Elaphe taeniura ridleyi) that is known to hunt bats. Though there are Tarantulas or Bird-eating spiders in the cave and they could potentially take out a few of Kitti’s bats.

Mammals of the temple mountain

Bats, of course, are not the only mammals living on the mountain with the Abbot. As hard as rural Thais try to eat their way through the remaining wildlife (they view the mammal field guide as a menu!), some still remain. No one could conceive of such audacity as hunting in the environs of the Abbot’s mountain.

There are numerous Variable squirrels, Grey-bellied squirrels,  Indochinese ground squirrels and Northern tree shrews rustling in the shrubs and trees.

Until recently, Slow lorises were seen quite often, though in recent years there have been no sightings.

There is an occasional Malayan pangolin, but since these shy and gentle creatures are worth their weight in gold, they have slim chances of survival even on the Abbot’s mountain.

While they are hard to spot due to their nocturnal habits, they are quite easy to catch. Pangolins feed primarily by raiding ant and termite nests up in the trees, and once spotted they have no escape route. All the hunter needs to do is to climb up and collect the defenceless animal from his feeding spot.

Unlike mammals that are shy and primarily nocturnal, birds and reptiles are much easier to see in their native habitat and the Old Abbot’s cave provides plenty of habitat for a wide range of species of both groups. It is the only place in the entire country that I have ever seen the Chestnut-winged cuckoo.

The most colourful reptiles on the mountain are the Green whip snake and Mustached or Blue-crested lizard, though the Garden fence or Changeable lizard can sometimes display some surprising colours during the breeding season.

Hope for the future

As sad as it is, that such a unique biodiversity hotspot is a rare exception in the sea of the cultivated landscape, it is perhaps encouraging that its very existence is due to the spiritual intervention.

Religion plays a much larger role in the Thai society than it does in most Western counties, and perhaps this could be one of the avenues to explore in the battle to conserve the county’s rapidly disappearing biodiversity.

And while we are on the subject of caves I have discovered another hidden gem in Kanchanaburi, not far from the Abbot’s mountain temple – the Phu Ma Dang Cave.

Phu Ma Dang Cave is one of the most fascinating caves in Kanchanaburi Province. It is known only by the locals and doesn’t feature on any of the tourist itineraries. The cave sits near the top of Na Kon Mountain on the main Kanchanaburi – Sai Yok highway and can be reached by a very steep climb through some bamboo forest.

The arduous climb might just be the reason that the cave remains virtually unknown to the outside world. As for me, labouring up a steep mountainside for half an hour in 40-degree heat and 80% humidity is part of the adventure, that makes the entire experience all the more worthwhile.

The coolness of the cave is a welcome relief from the moist heat outside. There is pretty much just one chamber in the cave, but it is quite vast and thankfully it hasn’t suffered much damage from local souvenir hunters.

The floor, the walls and the ceiling of the cave are covered with surrealistic calcium formations; some resembling snow and corals others – broken glass and ice sculptures. There was more variety of crystals in this tiny cave than in the famous Jenolan Caves in Australia. The variety of shapes and colours is spectacular. The most unusual is the floor. In many places, it is composed of small irregular triangles that defy the concept of there being no straight lines in nature.

That floor is one of the strangest things I have ever seen. The triangles appear like precisely cut tiles in some rustic design bathroom. But it appears that they have been created by dripping water like everything else in the cave.

The view from the entrance of the cave stretches across the Kanchanaburi countryside: fields fringed by the rolling hills of forested mountains.

The cave is virtually unknown outside of the few surrounding villages so you will have to visit it independently. It is located along the Sangchuto Road that runs from Kanchanaburi to Sai Yok. From Kanchanaburi head to Chia Tai Farm. About 34km out of town you will see rows of greenhouses on your right – this is Chia Tai.

Another 2km down the road, you will come to a Caltex petrol station on your left. This is a good place to ask the local shop attendants to point out the Nakon Mountain.

Once you get to the mountain look up to find the cave near the top (refer to the top image in this post).

Make sure to take plenty of water with you. The climb is hard work and the heat will be your worst enemy. And of course, bring a torch – the cave is pitch black.

2 thoughts on “Caves, Bumblebee Bats and Other Wildlife of Rural Thailand”