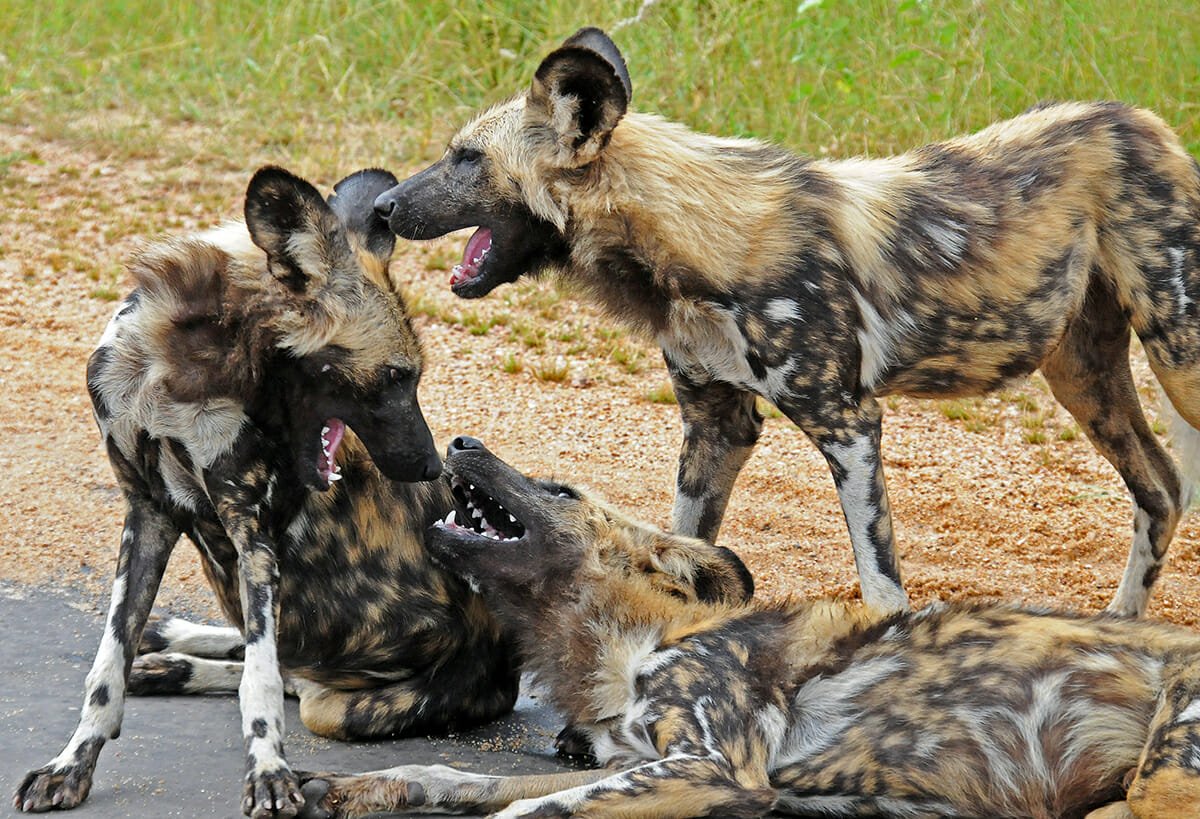 Once the ‘business’ part of our South Africa trip was finished, it was time for the Kruger Park safari. While South Africa is one of the top countries to see wildlife in Africa, Kruger National Park is one of the best parks in the country.

This was our chance to see some of Africa’s wild cats in the wild. There are two options for exploring Kruger National Park: independently on a self-drive safari, and on an organized tour. We did both.

As part of our South African road trip, we made a few forays into the different parts of Kruger and the surrounding sanctuaries. And when an unexpected opportunity to spend a few more days in South Africa presented itself, we booked an impromptu organized safari to see as many African safari animals as we could. Our choice for a multi-day safari was limited by budgetary constraints, so we chose an affordable 4D/5N trip with Viva Safaris, mainly because it included a stay in a treehouse.

Of all the wildlife destinations in Southern Africa, Kruger National Park is the most easily accessible. So whether you are coming for a week, a weekend or even just one night in the park, there are plenty of options to organize your stay.

We arrived at Tremisana in Motlala Game Reserve in the late afternoon and went on an afternoon drive straight away. While we did not see much wildlife on the drive, we managed to spot two animals that we have not seen before: a Grey Duiker and Common Duiker along with a few Giraffes and Impala. After the game drive, we drove to Marc’s Tree House Lodge – our home for the next 5 nights.

An organized safari is a convenient and hustle-fee way to visit Kruger National Park. A popular option is a 4-Day Kruger Safari. It gives you enough time to see most of the animals you came here to see.

If you are short on time, you could either take an overnight camping safari, or a Full–Day safari without staying in the park overnight.

And if you prefer the comfort and privacy of your own tour – you can splurge on a Private Full Day safari for your family.

If you don’t mind climbing up and down the tree all day, a treehouse is a really fun accommodation option. Our house was fantastic. It was constructed around the tree branch, so we had a massive tree trunk growing through our room.

Our balcony jutted into the treetops above the Klaserie River that was lost somewhere below. At night we would hear hyenas howling somewhere nearby and occasionally we had frogs camping inside the room.

As fun as staying in the treehouse lodge is, the lodge had one major downside – it was outside Kruger NP, lying in the Motlala Game Reserve, near the park’s Orpen Gate. And because the camp was outside the park, we didn’t have the opportunity to go on any night drives at all and missed out on a lot of sightings of nocturnal wildlife.

The daytime we spent in the park, watching wildlife and exploring different parts of Kruger. On the first morning of wildlife watching in Kruger, we spotted a male Lion sleeping concealed in the high grass only a couple of meters from the road.

The rest of the day was rather quiet in terms of wildlife sightings. We saw the usual ungulates, particularly the Waterbucks, but no predators.

However, on our return home, just a few kilometres away from the Orpen gate we spotted the rarest cat of all –  the Cheetah. It was a female with a sub-adult cub feeding on the kill in the tall grass. According to the official census, there are 200 cheetahs in Kruger, but they are rarely seen, judging by the fact that all sightings are marked on the map at the park’s headquarters.

The cheetahs were quite far away from the road, hence the poor images, but watching them through the binoculars, I could see every whisker on their beautiful faces. Even though many African mammals are quite large, a good pair of binoculars is a must for wildlife watching. Here is an excellent guide on choosing the best binoculars for safari.

The large tree by our cabin turned up a male Vervet monkey with his brilliantly blue testicles. Such unusual colouration of his family jewels seems to attract not only Vervet monkey females but human wildlife-watchers as well :). Even a tree squirrel seemed to be interested.

Another time we visited Kruger for a one-day safari,  we stayed at Tamboti Tented camp and went for a drive in the park. The tents in the camp are very comfortable and the less developed nature of the camp provided for a more immersive experience.

We spent most of the time on our drive looking for a leopard, but even though we found some fresh tracks on the road the cat itself eluded us.

The third time we arrived in Kruger in complete darkness and opted to spend the night at Timbavati lodge (about 14 km from the Orpen gate). In the morning we went for a sunrise walk on the property but did not see much wildlife. Although, a proper walking safari in Kruger usually turns up quite a few sightings. But I was quite excited to spot a Bushveld Rain frog at the campsite.

These guys spend most of the year underground and only come out after heavy rains, just like the Truncate-snouted Borrowing frogs in Thailand, or a variety of burrowing frog species in Australia. During the walk itself, we saw a rather aggressive Zebra that chased us off the road, a Giraffe, some Kudu, a juvenile snake and lots and lots of Golden Orb Spiders.

Of all the wildlife sanctuaries we visited, adjacent to Kruger National Park, the most interesting was Kapama. Our main goal for visiting Kapama was to see Hoedspruit Endangered Species Center. The Center is involved in the conservation of Cheetahs and Wild dogs, as well as Black-footed Cats. Unfortunately, the Black-footed cats were breeding at the time of our visit and we were not able to see them.

HECS has successfully released some of its hand-raised cheetahs on the adjacent Kapama property and reportedly these cats were doing quite well, even though they received no predation or predator-avoidance training.

Apart from cheetahs, HECS also works with wild dogs and vultures. We visited just in time to see the feeding of both species.

Overnight we stayed at the Center’s Tented campsite and went for a late afternoon game drive in Kapama Reserve. The area around the campsite was quite rich in wildlife. I saw a male and a few female Nyala, lots of birds including Common Scimitarbill and Yellow-Breasted Apalis and tracks of a largish cat, probably a Serval and some monkey prints.

There were also a few lizards around the campsite including Jones’ Girdled Lizard and lots of frogs calling at night. I could hear Painted Reed frogs but found only Red Toads and a Sand Frog on the campsite grounds.

The beginning of the afternoon drive was quite uneventful: we saw some Wildebeest, two Waterbucks and two Elands.  Later on, a Giant Eagle Owl dropped its dinner (guinea fowl) on the roof of our truck.

Just before sunset, our luck picked up and we found the resident pride of Lions. They have made a kill and it was the cubs’ turn to feed. We watched them until only one cub was left at the carcass tearing the last scraps of meat off the bone.

Then we went to see the kingly-looking male. It was amazing how close the pride let us approach, we were only 3-4 meters away from the cats, ready to leave at any sign of discomfort, but the animals totally ignored us.

During the night we spotted a Porcupine, a family of Jackals and then, unbelievably, an African wildcat!  We followed it off-road for a little bit and it appeared to be quite unfazed. After a while, it did get bored with us though and jumped away.

Moholoholo is another wildlife sanctuary similar to others we already visited. What distinguishes Moholoholo from all other places is the man behind the place – Brian Jones.  He gives an intense and interesting presentation in a way of introducing visitors to his park.

Brian is heavily involved with vultures and centres his presentation around them. Being birds (and not mammals), vultures can eat diseased dead flesh and not get infected by it.  Even their feces are strongly disinfecting.

Vultures are able to fly for thousands of kilometres at high altitudes where the temperature is -40 C and there is almost no oxygen. These birds are able to recycle 90% of their oxygen. Quite a feat.

Around Moholoholo we spotted a Village Indigobird and a colony of Rock Hyrax – a species I wanted to see for a long time.

Overall, we managed to see a good number of wild cats during our combined Kruger Park safari. Plenty of lion sightings, at least three leopards, a cheetah family and a rare treat – the white lions. Together with the African wildcat in Kapama, the trip turned up 4 wild cat species, which is pretty good going as far as cats go.