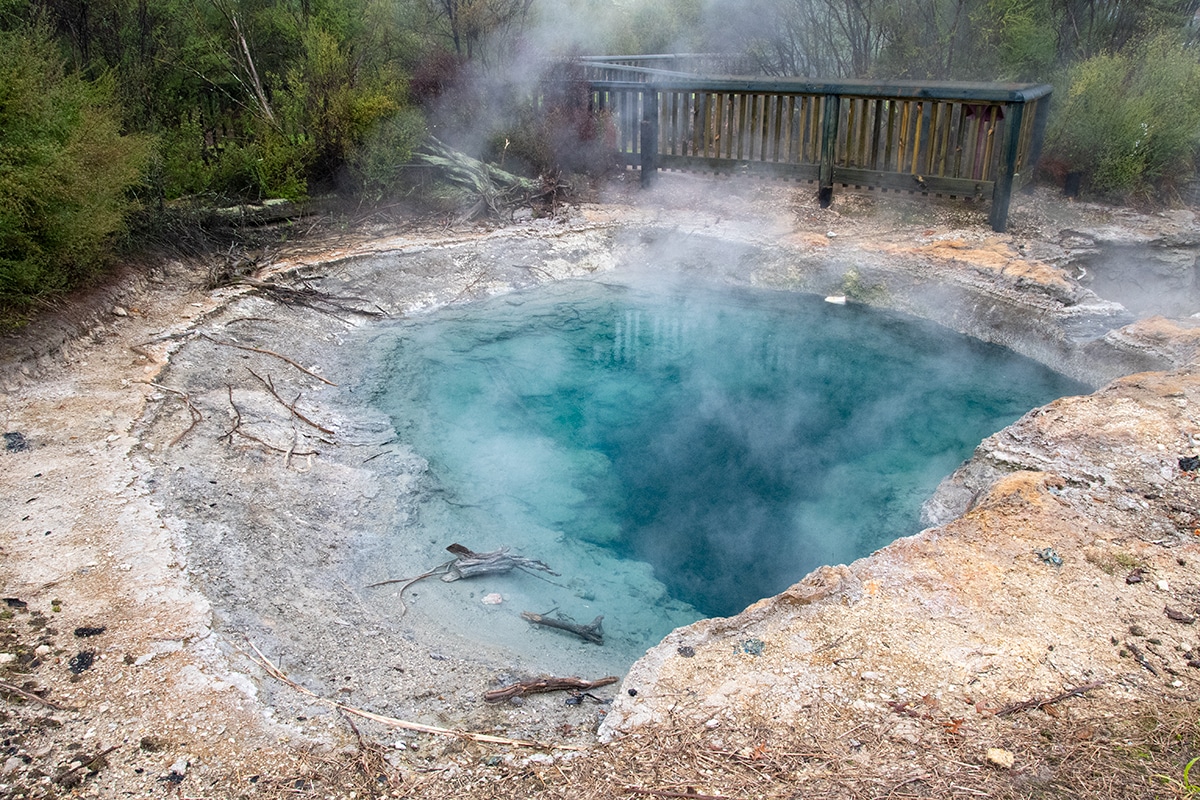 If you find yourself in Rotorua, don’t miss Kuirau Park – it is home to most types of geothermal activity under the sun, and it is free to visit.

Located at the northern end of Rotorua, a 5-minute walk from the centre of town, Kuirau Park is New Zealand’s only free public geothermal park. The setting of the park is an unexpected mix of manicured lawns with flower beds and bubbling, hissing, steaming pools of geothermal activity.

There are vividly colourful alkaline pools, milky acidic pools, boiling waterfalls, hissing steam vents, and bubbling mud pools. At the northern end of the park, there is an atmospheric geothermal Kuirau lake framed by lush mossy and misty rainforest growing on its shores. A wooden walkway wraps around the lake, taking in a boiling stream and the Tolkienesque forest.

Kuirau Park is a multi-sensory experience and a living landscape. The geothermal field is constantly changing. New activity can occur anywhere and become unstable quickly. Where you see stream rising, or the ground is white and brown or orange, a new feature may be forming.

Where to stay in Rotorua

One of the more unusual spots with ample character is the Princes Gate Hotel. Dating back to 1897, the hotel was originally built in Waihi, about 150 km north of Rotorua. Yet, in 1917, the hotel’s owners took it apart and, nail by nail and board by board, transported it to Rotorua, where the hotel was reconstructed to its original appearance. It would appear that the rooms at the Princes Gate Hotel have not changed much since its reconstruction.

The legend has it that in early Māori times, a beautiful young woman named Kuiarau came to bathe in the lake, and a sinister creature dragged her to his layer at the bottom of the lake. The gods above were furious and destroyed the creature by making the lake boil. Since then, the lake and the steaming park around it have been known by the name of the woman, but the spelling has changed a little over time.

Ever since Maori people lived in Rotorua, as early as 1300 AD, they used steam vents and clear alkaline springs of Kuirau for cooking, particularly for boiling freshwater mussels.

In the late 19th century, the Waiparuparu pool was a popular spot for swimming for both children and adults. Around the same time, people started using the porous silica, known as sinter, produced by the Waiparaparu hot spring as a building material for the construction of chimneys. You can still see these chimneys at the Maori village of Ohinemutu on the shores of Lake Rotorua.

Apart from the lake and the boiling stream, Kaiuru Park is home to almost every type of geothermal activity under the sun. The one feature missing from the park is a geyser. However, new, unexpected eruptions do occur from time to time. In 2001, a steam vent sent massive rocks hurling into the air, snapping tree branches as if they were twigs.

Generally, geothermal pools are classified as either alkaline chloride features or acid sulphate features, and the two are quite different in appearance. And unlike Lake Rotorua, where most hot springs are acidic, at Kuirau Park, the pools are mostly alkaline.

Alkaline chloride pools are typically clear water springs forced rapidly to the surface by geothermal pressure. So, when you see a very clear, often colourful, boiling spring, you are looking at water from deep within the Earth’s core that recently arrived at the surface after a journey up the layers of heated rock below.

Because of their clear water and bright colours, alkaline pools may appear quite inviting. But below the surface, they can be simmering at immense temperatures. The water temperature of the gorgeous azure blue spring I’m the image below is 72.6ºC.

Unlike crystal clear alkaline pools, acid sulphate pools typically have a murky or milky appearance. When the water from the depths of the earth can’t reach the surface quickly, it may boil underground, and a mixture of steam and volcanic gases will rise towards the surface, forming an acidic sulphate feature. In the hot soup of water and gas, hydrogen sulphide turns to sulfuric acid.

The pools at Kuirau park are mostly alkaline, but you can still find a few acidic features. Their milky waters may look deceptively mild, but they may be acidic enough to dissolve your entire body in no time. So, it’s best to stick to the paths. And if you do feel like a soak in both alkaline and acidic pools, head to the Polynesian spa perched on the picturesque shore of Lake Rotorua.

Mud pools are a quintessential feature of North Island’s landscape. They form under rainwater ponds where steam and gas rise to the surface. Under pressure from the rising acidic gases, the surface rocks produce clay which then mixes with rainwater to create a muddy, bubbling goo, or mud pool.

Rotorua is a rainy place, so its mud pools are often quite diluted, looking more like dark, silted, boiling ponds. But the smaller mud pools can be quite thick, almost extraterrestrial in appearance.

While it’s no longer possible to bathe in Kuirau Park hot springs, there are a few foot baths in the park where you can soak your feet after walking the park’s trails. The most popular foot soak is located between the children’s playground and the lake. A couple more can be found on the other side of the lake.

It is a good idea to bring a small towel, not only to dry your feet but also to mop up the water from the benches that may get wet when people swing their feet in and out of the baths.

If you visit on Saturday, in the first half of the day, you will catch the farmer’s market at Kuirau Park. Held every week between 6 am and 1 pm, the markets are a good opportunity to pick up some fresh local produce and have breakfast or lunch.

There are also book stalls organized by the Rotorua library, where you can pick up a book to go with your fresh snacks and while away the Saturday morning among the gurgling hot springs and boiling mud pools.

How to find Kuirau Park

Kuirau Park is located in the northern part of Rotorua, across the road from Rotorua Hospital. It is a few minutes walk from the centre of town to the corner of Pukuatua and Ranolf streets.

If you are driving, you can park at the public car park (which is also free) at the south end of the park and follow the trails and walking paths towards its northern end.