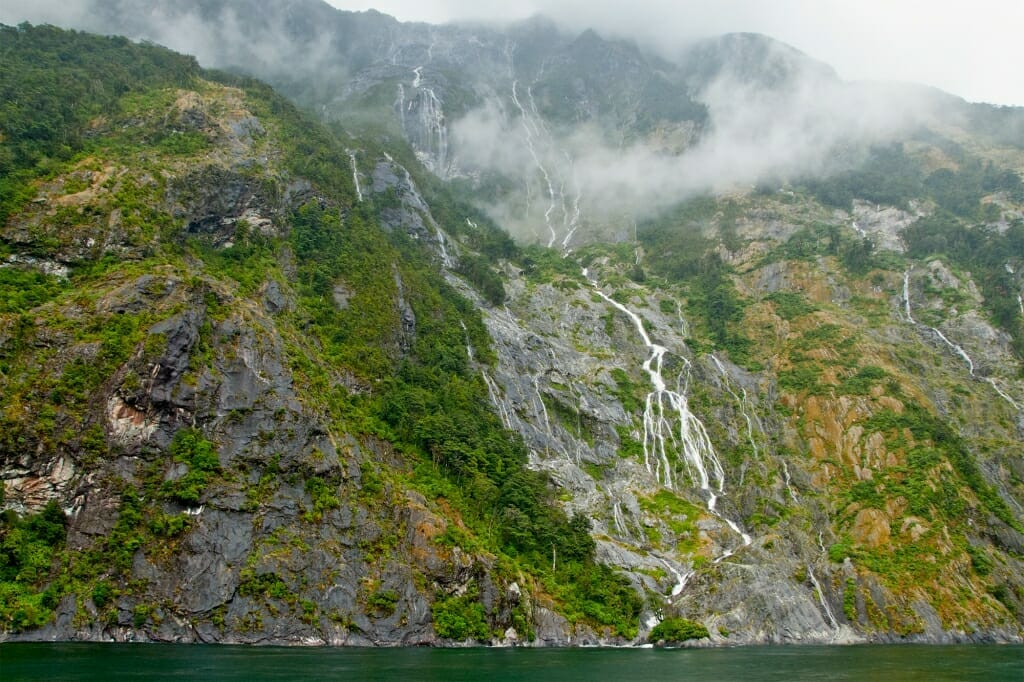 No trip to New Zealand’s South Island would be complete without a visit to Milford Sound in Fiordland National Park. This World Heritage site lies just over the mountain range from Queenstown, no more than 50 km away, but because the terrain is so rugged, it can only be accessed by a 295km loop via Te Anau. My friends and I were on a tight schedule and so we opted for a day tour with one of the local operators.

I personally find that there is merit in taking at least one guided tour during a trip. Our guide/driver provided live commentary for the entire 4 hours of the drive to the sound. I have learned more about New Zealand’s natural history, Maori and European settlers’ history, local legends and cultural idiosyncrasies on this drive than I would have from reading volumes of guidebooks. So while I prefer to explore new places independently, I do like the high volume of information that can effortlessly be learned from a single guided tour in a new country.

As we headed out of town along the northern half of Lake Wakatipu, we watched the sunrise over the peaks of the mountains. It was a dramatic start to the day, but as the darkness lifted, we saw that it was going to be an overcast and rainy day.  Not that it mattered much for a visit to Milford Sound, where it reportedly rains 90 percent of the time.

After about 2 hours of driving, we arrived in Te Anau – a town most notable for Te Anau lake –  a  large glacial lake framed by towering mountain peaks. While my fellow day-trippers stretched their legs at the tourist centre, I went to the lake for a look around and found a few Black-billed gulls and a rainbow.

The road from Te Anau to Milford Sound travelled across the stunning Fiordland National Park and passed a number of interesting places. First up, were the Mirror lakes, known for their still surface that provides outstanding reflective views of the Earl Mountains. We happened to reach the lakes during a brief period of sunshine and were treated to fantastic views as a result.

The walkway from the road to the lakes meandered through some red beech forest, where seemingly every surface was covered with moss and lichen. And as promised by the driver, a New Zealand fantail swooped in from the treetops to check us out. The return track to the lakes from the car park is only 400 meters, but it provides a stunning opportunity to stretch your legs during the drive.

Soon after we left the Mirror lakes, the sky darkened and it started to rain. We passed Knob’s Flat and Lake Gunn without stopping or even knowing that they were there beyond the veil of rain. The next point of interest was Monkey Creek and Lyttle’s Flat. Despite the rain, we stopped, mainly so that people could fill their water bottles with crystal clear mountain spring water from the creek. I was so impressed with the moody scenery of Lyttle’s flat that I decided to miss out on the spring water and take some photos instead.

Monkey Creek is rumoured to be a popular place to spot wildlife on the Milford Road. The rarities like whio (blue duck) and kea, New Zealand’s alpine parrot are said to frequent the area. Of course in the pouring rain spotting these native birds proved to be impossible.

The last stop was at the Chasm. By the time we got there, the rain was coming down quite heavily.  The walk to the Chasm took us along a loop trail through the fairytale scenery of red beech forest. And as cold and unpleasant as the rain was, it was amazing to see this forest in its element. Tall trees wrapped in thick layers of moss, vines and ferns enveloped in mist, droplets of rain running down the leaves of hanging moss gardens.  The scene had a sense of an ancient,  primeval world to it.

Another positive side effect to experiencing these sites in adverse weather is that only a small percentage of visitors choose to leave the comfort of their coaches, giving those that do a rare opportunity to enjoy these places with a degree of intimacy.

And to my huge delight, as I was walking back to the coach a kea landed on a mossy tree stump in front of me. This was the only time I saw this beautiful endangered New Zeland’s alpine parrot during my time on the island. Of course, my telephoto lens was safely tucked in on the bus, so all I could grab was a wide shot of the bird amid its dramatic primeval habitat.

When we arrived at Milford sound, the fiord was concealed by the thick mist, which lent an element of mystery to an otherwise well-known site. Fiordland National Park is one of the wettest places on earth, with Milford sound averaging more than 6 meters of rain a year. As our boat took off towards the Tasman sea the fiord was barely visible in the mist.

The powerful scenery of the fiord was completely otherworldly.  Twelve-hundred meter high sheer cliffs rose out of the still dark water, covered in lush temperate rainforest and streaming with waterfalls. The rain was creating more temporary waterfalls right in front of our eyes. Some of them were so small that they never reached the bottom of the fiord, being blown into oblivion by the wind.

Milford sound supports a number of wildlife species: New Zealand fur seals, Fiordland Crested Penguins, Blue Penguins and Bottlenose Dolphins. Most species were too hard to spot through the rain, but the New Zealand fur seals were quite happy to relax on their usual rock, seemingly unaffected by the weather.

The wet weather was a perfect addition to Milford Sound experience, as it created a sense of discovery, of heading into the unknown. The visibility was so low, that we couldn’t see what lay ahead and as one cascading waterfall after another floated into view, it was still very difficult to see where they began – the tops of the cliffs were often lost in the mist.

In fact, it is the moody weather of Milford Sound that inspired the creators of the Alien: Covenant (2017) movie that was filmed at Milford Sound. The alien planet where the story is set is a stunningly beautiful but harsh world with dramatic clouds, vibrant green vegetation and mountains that appear and disappear in the clouds.

Once we reached the Tasman Sea we could feel the turbulence of the open water. The boat turned around and headed back the same way, though none of us could recognize any of the features of the landscape as they emerged out of the mist and then disappeared back into the ghostly white unknown.

Queenstown to Glenorchy via Middle-earth