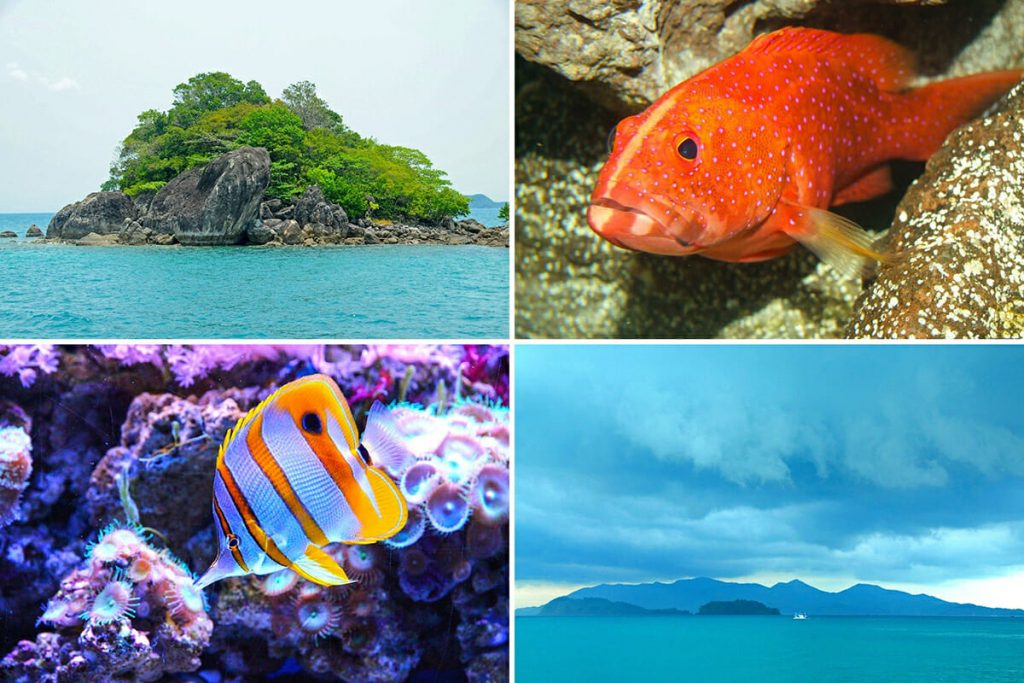 From Kaeng Krachan, we made our way to Hua Hin and caught a bus to Trat and, the following morning, a ferry to Koh Chang. The third largest island in Thailand, Koh Chang, is part of Mu Ko Chang Marine National Park.

While waiting for our breakfast, we witnessed a bit of a natural spectacle when a Large-billed crow raided the nest of Common mynas. Despite the desperate cries of the parents, the crow took off with an egg in his beak.

Koh Chang Ferry: Ferries leave Ao Thammachat Pier in Trat and arrive at Ao Sapparot Pier on the northeast coast of Ko Chang island 45 minutes later. Ao Thammachat Pier is about 10km from Laem Ngop, a small coastal town, which over time, has become the generic name given for all the piers.

Getting around Koh Chang: We rented scooters at the pier for the duration of our stay on the island and rode to Laem Ngop. Alternatively, you can get around the island on a songthaew (pick-up truck taxi ). They run regularly from the ferry terminal and stop at all the beaches along the West Coast of the island. Songthaew service is available day and night, although the prices increase after around 10 pm.

As we did not have a prior booking, we took a ride along the beach front to see what accommodation was available. We didn’t want to stay in a resort and were looking for some low key beach huts. Fifteen minutes later we found the perfect spot – Indie Beach Bungalows near Bang Bao Pier.  The bungalows were positioned right on the beach and the property had a very naturalistic setting. It was comfortable without being too developed. And to top it off, it was quite inexpensive (AUD $55 per night for the 2 people bungalow).

Ko Chang is considered to be one of Thailand’s most beautiful islands. Most of the island is protected as part of a larger Mu Ko Chang Marine national park that’s comprised of more than 40 islands. It’s not quite Palawan, but it is a very beautiful chain of islands.

The park is home to 29 mammal species, 74 species of birds and 42 kinds of reptiles including Ko Chang Frog – Ko Chang’s only endemic species.

Unfortunately for us, the protected part of the island was virtually inaccessible, while the unprotected part was quite heavily developed for tourism and wildlife sightings were quite uncommon. The only mammal that we saw during our few days on the island was a Variable squirrel.

There was a good population of Rock monitors living in the palm trees of the resort we were staying at. And at night I found a Painted Bullfrog and a Four-lined tree frog.

We took a day to ride all around the island with a plan of trekking to one of the waterfalls. The ride was beautiful – Ko Chang scenery is spectacular. But the trek to the waterfall was quite uninteresting and the waterfall itself was completely dried out, which we should probably have expected given that it was the end of the dry season.

Most of Ko Chang wildlife, however, is found below the surface of the water. Mu Ko Chang National Park is famed for being one of the world’s top diving and snorkelling destinations. To investigate the abundance of marine life, we booked a full day snorkelling trip that took us to a number of islands, some of which were surrounded by beautiful coral reefs.

The underwater world was indeed spectacular. I am not particularly familiar with different fish species, but some I did recognize: Bluestreak cleaner wrasse, Pink anemonefish, Long-nose butterflyfish, Coral grouper, Moon wrasse and a few different Clownfish species. Some creatures could be seen from the boat, such as Tramperfish and massive schools of Sergeant major fish.

To see marine wildlife above water, go whale watching in the Gulf of Thailand!

On the way back from the snorkelling trip the weather started to change. But before the sky darkened we saw a small waterspout touch down on the water near one of the small islands. After which the tropical storm moved in and we were happy to climb out of the boat to the safety of dry land.

Mu Ko Chang Snorkelling Tours: There are two types of snorkelling trips offered on Koh Chang: half day and full day trips. Considering how much there is to see, I would definitely recommend the full day trip. You get picked up at Bang Bao between 8:00 and 8:30 am for the 9:30 am boat departure. You’ll spend your day snorkelling around three different islands in the Koh Rang area. It takes about 1.5hrs to get there and the rest of the time will be spent snorkelling. You return to Bang Bao around 5:00 pm.

The full-day tours differ depending on which tour agency you pick. Stay away from the enormous budget boats – they get quite chaotic with so many people on board. If you feel like a splurge, you could go on a sailing boat. For the mid-range however, the best agencies are Mr. Khai and Kon Tiki tours. They have lovely wooden boats and visit some of the areas that the big tour boats don’t get to. Expect to pay around 1,250 – 1,500 baht per person for such mid-range tour.

Another thing you can do in Mu Ko Chang National Park if you get bored of sitting on the beach is to go sea kayaking. Most hotels and resorts have kayaks for hire and you could spend a few hours exploring some of the nearby little islands. If you would like to go further out, to the islands that have good snorkelling areas, you may want to book a guided kayaking trip. The South East Asia Kayaking, a British run business comes highly recommended for any kayaking activities on Ko Chang.

Like most of Thailand, Koh Chang has three main seasons, cool, dry and rainy.

The cool season runs from November to February. This is the most popular time for visiting the island and it gets quite busy. The temperature stays at pleasant 27C – 30C and the thunderstorms are not frequent and rather refreshing.

The hot season runs from March to April. During these months it gets quite hot and very humid. This period also the period of Thai holidays, especially in April during Songkran, the Thai New Year that is celebrated from 13 to 15 April.

If you do visit during Songkran, be prepared to have buckets of water thrown at you at any time of the day, whether you are walking or riding your bike. Try to get into the spirit of things, hide your electronics in the waterproof bags and enjoy the celebration. Otherwise, you will not be able to leave your hotel.

The rainy season runs from the end of May to the end of October. This is the quietest time on the island when prices at restaurants and accommodation drop off. If you don’t mind getting caught in a tropical downpour now and then, this is a good time to visit Koh Chang to simply chill on a beautiful island. It does not rain all day but usually does rain every day. On the plus side, the vegetation is lush and the waterfalls are in full flow.