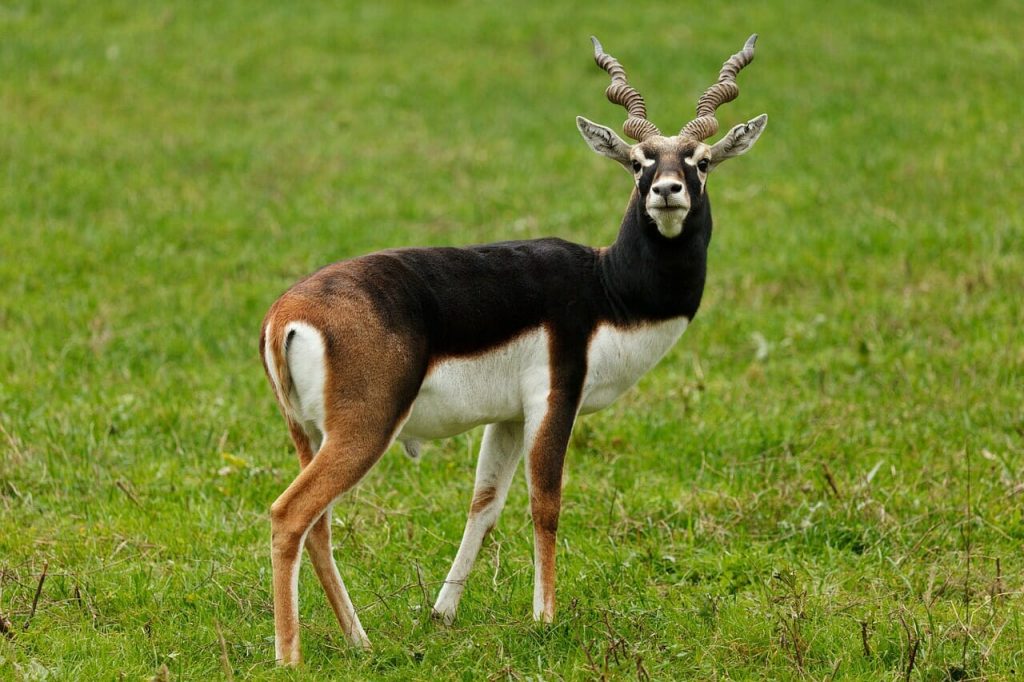 The land of Mowgli, Bagheera and Shere Khan, India is home to some of the world’s most famous national parks. There are hundreds of national parks and wildlife reserves in India, many of them lie in close proximity to some of India’s biggest cities. For example, if you find yourself with a few free days in Hyderabad, you can visit a number of reserves from your base in town. Check out the best stay options near Hyderabad, whatever your budget is.

Here is the list of national parks in Telangana and the surrounding states. All of them can be visited from Hyderabad, though some will take more commitment to get to.

Popularly known as the Chiran Park or Chiran Palace, this park is located in the city of Hyderabad, in the jubilee hills area. The smallest of the National Parks in Telangana, it is protects 400 acres of forest and can be best described as a “jungle amidst concrete jungle”.

The palace originally belonged to Prince Mukarram Jah. It was handed over to the government and then eventually got its national park status in 1998. The palace is actually more of a villa surrounded by other buildings like the motor khana and the gol bungalow stable for domestic animals.

Today, Kasu Brahmananda Reddy is home to 600 species of plants, 140 species of birds, 30 species of butterflies and a number of reptiles. Among the park’s mammals are the pangolin, porcupine and small Indian civet. The entry fee to the park is INR 25 for adults and INR 10 for kids. It is generally open at 5 AM until 10 AM and 4:30 PM to 7 PM.

This large urban national park is located in the Vanasthalipuram area of Hyderabad in the Telangana district. It is an extensive green space and the source of clean air for Hyderabad. The park was named after the Jain Teerthankara Mahavir on his 2500th nirvana anniversary in the year 1975.

Historically a private hunting ground for the Nizams of Hyderabad, this park protects a large population of blackbucks, few leopards, wild boars, porcupines, Indian pond heron, egrets, kingfishers and a variety of other bird species. The park can be reached easily by road as it is just 15 kms from main Hyderabad city. It is open throughout the year and charges minimal entry fees.

The most famous of the National Parks in Telangana, Mrugavani is a beautiful park, located in Chilkur near Hyderabad (20 km from the bus station). It covers an area of 1200 acres and protects a variety of wildlife species including jungle cat, mongoose, jackal, porcupine, fox and black-naped hare.

There are over 100 bird species in Mrugavani and more than 600 different species of plants, with the main vegetation types of grassland and deciduous forest.

A unique feature of the park is a library and a museum for nature enthusiasts. There is also a watch tower for observing wildlife. The park can be visited year-round and explored in a jeep safari or on nature walks. You can also camp within the park.

The more impressive wildlife reserves and national parks are located slightly further from Hyderabad. Kawal Tiger Reserve lies 280 kilometres to the north, in at Jannaram mandal of Mancherial District of Telangana state. This 2,015.44 km2 reserve forms the southern tip of the Central Indian Tiger landscape – one of the largest continuous networks of tiger habitat in the word. Kawal is linked by green corridors to Tadoba Tiger Reserve 100 km to the north and Indravathi National Park 150km to the east. This interconnected location makes Kawal an important area for dispersing tigers.

Of course, tigers are not the only animals living in Kawal. The reserve is also home to the leopard, jackal, wild dog, Indian fox, jungle cat, leopard cat, giant squirrel, sambar, nilgai, chital, palm civet, small Indian civet, porcupine and flying squirrel, as well as 120 species of birds and at least 10 species of frogs.

The best time to visit Kawal Tiger Reserve is between November and June, and some of the best places to stay are the forest rest houses in Jaunaram, Mancherial and Nirmal.

Once you have checked out the national parks in Telangana, you can also visit one of the following parks which are not too far from Hyderabad but fall outside of Telangana State.

This national park is in Maharashtra, 150 km from Nagpur airport. It is one of the most popular tiger reserves in the country and an excellent wildlife watching destination. The park is home to 43 tigers, which is the highest count in India.

The landscape in Tadoba is dominated by teak forest and dissected by the Andhari River.  Apart from tigers, you can also spot sloth bears, wild dogs, deer, hyena and civets. This is a huge reserve, spanning over 1700 square kilometres, and it has been protected since 1955.

It is best to spend a few days in Tadoba and join a number of safari drives to increase your chances of spotting a tiger. The safaris run from 6 AM to 10 AM and from 3 PM until 6 PM. If you are exploring the park independently, keep in mind that the last entry is at 4:30 PM.

Located in the state of Kerala, Periyar National Park is very close to Thekaddy, in the district of Idukki. You can fly from Hyderabad to Madurai and then travel to Periyar by car (140 km). The park is classified as a tiger reserve and an elephant reserve and it is a good place to spot both species. Spread over 950 square kilometres, Periyar is a crucial reserve as it protects the flora and fauna of the region between the rivers of Periyar and Pamba.

The park’s vegetation is represented by a few hundred flowering plant species, 170 species of grass and about 140 types of Orchids. And while most people come to Periyar for a chance to spot a tiger and the elephants, the park is home to many more species of wildlife. The park is home to gaur, sambar, wild pig, Indian giant squirrel, Travancore flying squirrel, jungle cat, sloth bear, Nilgiri tahr, lion-tailed macaque, Nilgiri langur, Salim Ali’s fruit bat, stripe-necked mongoose, and Nilgiri marten.

The avian species include Malabar grey hornbill, Nilgiri wood pigeon and White-bellied blue flycatcher. The park is open from 6 AM to 6 PM every day.

National parks are like a breath of fresh air amidst the overpopulated, overpolluted world around us. The precious wildlife and habitats that the national parks protect will be our legacy for future generations. Visit one of these national parks on your next vacation and re-connect with yourself and the world around you.

1 thought on “A Guide to the National Parks in Telangana, India”