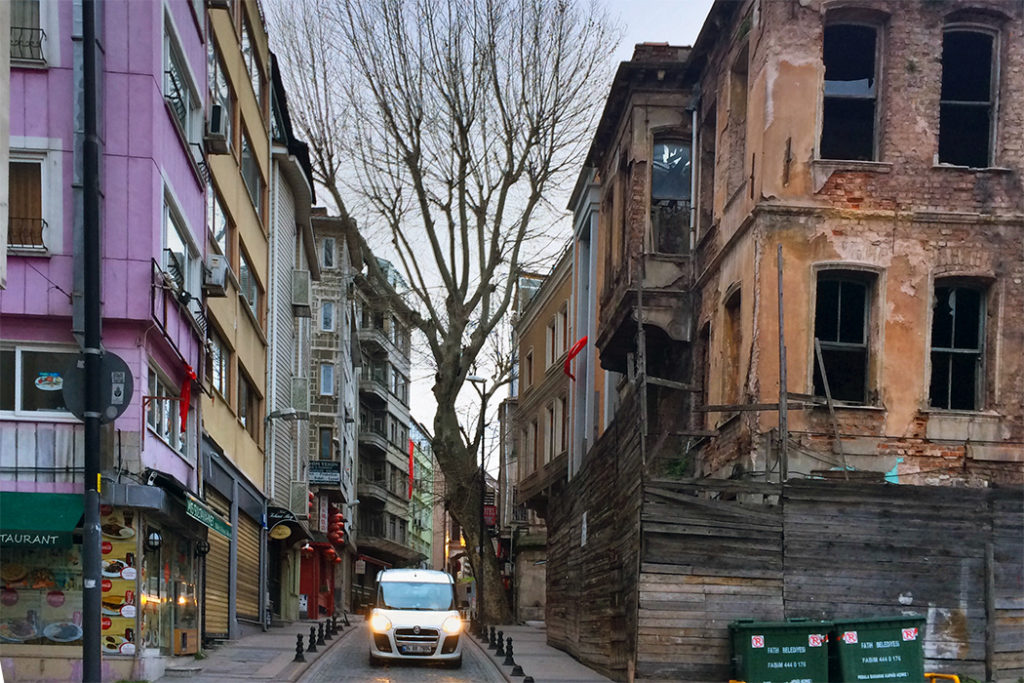 One of my favourite things to do in Istanbul was getting lost in a maze of its old streets. I would ride a tram to the last stop just to end up in a new and unfamiliar place or simply walk out of the hotel and follow the turns and bends of an ancient street.

While the Imperial buildings in the city were designed to instil a sense of reverent awe in the visitors and the citizens alike, the real character of the city is found on the back streets of Istanbul. The winding alleys of the old residential quarters of the city are an eclectic mix of the old and the new, with charismatic shops and cafes huddled between the traditional and often crumbling two-story wooden houses.

Back streets of the Grand Bazaar and Büyük Valide Han

The Grand Bazaar is one of the oldest and largest covered markets in the world. And because the bazaar is so vast and old, the maze of narrow twisting streets surrounding it is so complex that it is almost impossible to navigate. I gave up trying to reach a particular shop once I realized I was going in circles.

So I let go of my plans and wandered the streets, exploring all the hidden nooks and crannies. Modern shops and cafes propped ancient crumbling structures in that matter-of-fact way that you can only see in Istanbul.

By pure chance, I discovered one of the most interesting buildings in the neighbourhood – Büyük Valide Han. It was built in the 16th century to store merchandise unloaded from the ships anchored on the Golden Horne and to provide living quarters for the travelling merchants.

Amazingly the structure is still in use by the various craftsmen as workshop space and storage area, although it is quite run down.

But the reason most people visit Büyük Valide Han is the gorgeous view of Istanbul from the roof of the Han. It is one of the most unique vantage points in the city. To find the spot, head to Çakmakçılar Yokuşu and walk up the stairs to the second floor. If you are lucky, the caretaker will be there and will let you out onto the roof for 1 lira.

Back streets of Sultanahmet and Akbiyik Camii

A visit to Sultanahmet is a must for any first-time visitor to Istanbul. I spent a lot of time wandering the backstreets of Sultanahmet. Especially early in the mornings. My body clock decided to stay on Australian time, and I often found myself wide awake at 5 o’clock in the morning. Not naturally being an early riser, I was curious to see what the world looked like as it was waking up.

In Istanbul, pre-dawn streets were quiet and quite serene. The first people I would see on the streets were men returning from a local mosque after the morning prayer.

This is how I discovered one of the oldest mosques in Istanbul – Akbiyik Camii.  Built-in 1464, it is a small green structure with a single minaret, hidden away on a street corner between the Bosphorus and the centre of Sultanahmet. Amazingly it is still a functioning mosque.

The old cobbled streets held plenty of other surprises: unexpected glimpses of well-known structures in the gaps between the decrepit collapsing traditional houses; gravestones on the side of the road, marking an ancient cemetery; a ruined stone arch hinting at an even older structure, all interspersed with modern hotels built in the traditional Turkish style to preserve the aesthetic appearance of the streets.

Without the people on the streets, it was impossible to guess their age – they could have belonged to an era between now and the time of Suleiman.

Back streets of Ayvansarai and kind strangers

Ayvansarai is another neighbourhood whose streets I became quite familiar with, not because I planned to, but because I got lost. I had an ambitious plan to walk from Chora Church all the way to Balat, but after encountering some technical difficulties with my trusty pocket wifi device (aka dead battery), I lost my ability to navigate the maze of confusing backstreets, half of which were not even marked on my paper map.

And I could not have picked a better neighbourhood to get lost in. Ayvansarai is one of the poorest and most traditional Islamic neighbourhoods in Istanbul. Not the kind of place for a carefree stroll. But there I was.

How do you ask for directions when you don’t speak the language and will not understand the answer? I knew I needed to get to the ferry wharf at Ayvansarai. So I asked a passer-by for Ayvansarai. ‘Ayvansarai?’ he asked. He made a sweeping gesture with his hand repeating: ‘Ayvansarai’.  Great. The entire neighbourhood is called Ayvansarai.

The next time I tried asking for directions, I tried to be a little clearer. I pointed to the ferry icon on the map while saying Ayvansarai. But, of course, the elderly gentlemen did not have such great eyesight and couldn’t see a thing on a small map.

I had to resort to making breaststroke movements with my arms – the only way I could think of expressing a river. That seemed to have done the trick, and my helper proceeded to perform a complicated combination of hand movements, indicating the various turns I had to take to get there.

After he repeated the moves about three times, I got a reasonably good idea of how to get to the Golden Horn. About 10 minutes later, I could see its glistening waters from a high point on one of the streets, and another 10 minutes later, I have made it all the way to the water’s edge.  And to think that I could’ve missed all these adventures if I chickened out and retraced my steps from the church back to the train station and returned to Sultanahmet!

Balat is a traditional Jewish neighbourhood, and like most old Jewish neighbourhoods, it is full of character and colour. Every door, every window frame and even rain gutters are painted in bright colours. The impossibly steep streets of Balat only add to its quaint charm.

Back streets of Pera

Pera‘s main street – Istiklal Caddesi, is so markedly different from the rest of Istanbul that it feels like a different city, but the backstreets of this ‘European’ part of the city have the familiar Istanbul feel.

The same two-storey houses with enclosed balconies, same clotheslines stretched from window to window, same ancient doorways and window frames. The steep streets leading up to the Galata tower are quintessential Istanbul.

2 thoughts on “Uncovering Hidden Gems of Istanbul by Getting Lost”