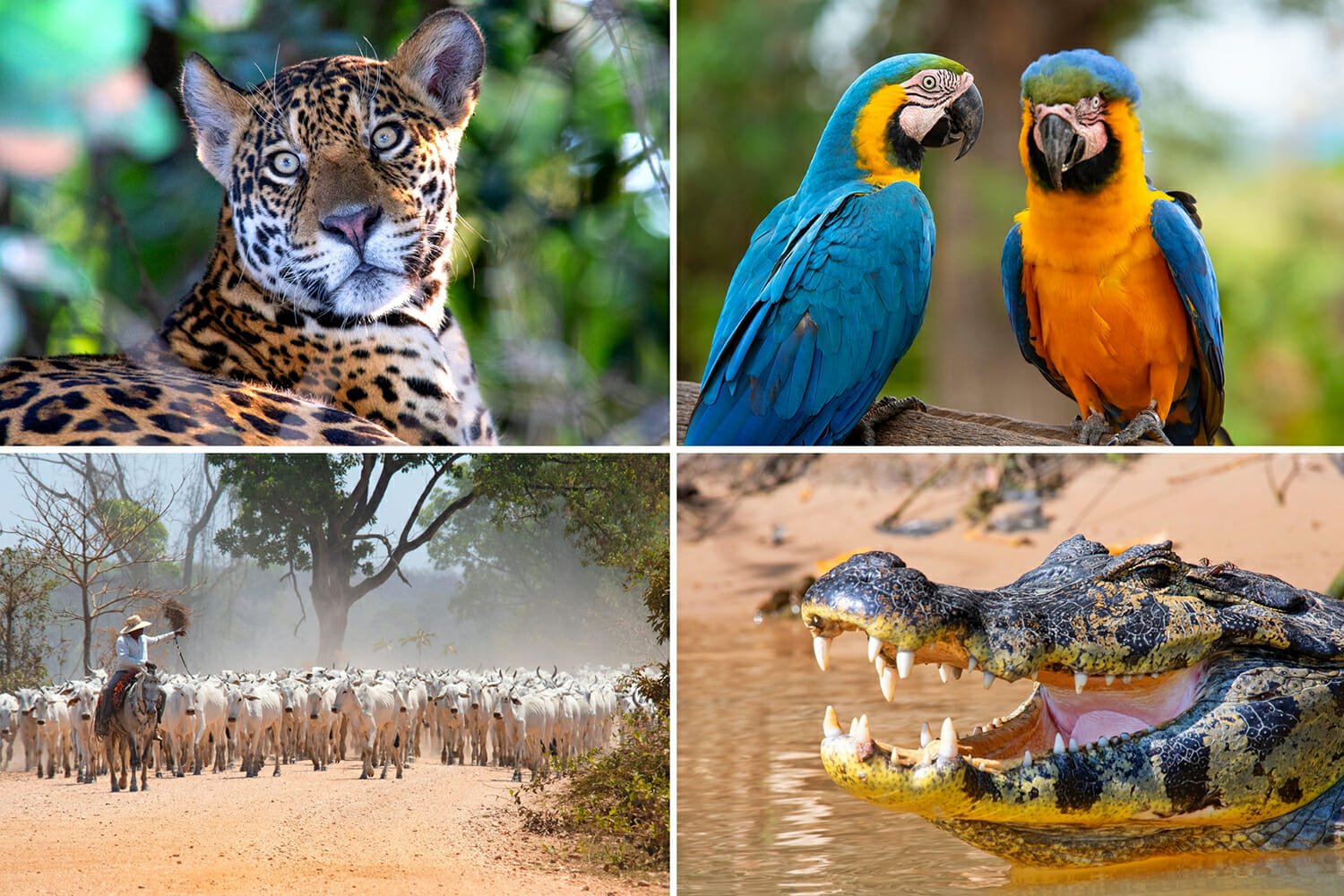 No holiday in Brazil would be complete without experiencing the country’s spectacular biodiversity. After all, Brazil is the most biodiverse country in the world. And to witness this powerhouse of nature, there is no better wildlife watching destination to include in your South American itinerary than the Pantanal.

Often overshadowed by the mighty Amazon, the Pantanal is the true wild heart of Brazil. The enormous wetland, stretching over two Brazilian states and the border regions in Bolivia and Paraguay, is home to the highest concentration of wildlife in the Americas. At least 159 species of mammals, 656 species of birds, 53 species of amphibians and 98 species of reptiles live in the Pantanal.

Unlike the Amazon, where the wildlife is concealed behind the dense jungle foliage, the Pantanal displays its wild treasures on the flat, open stage of grasslands, marshes and lakes. It is the perfect arena for wildlife holidays in South America, and given its size, it gives plenty of opportunities for exploration.

The best time to visit the Pantanal is between the months of June and October, when the seasonal flooding has subsided, leaving behind a reach aquatic prey base. Although even in the dry season, a large portion of the Pantanal is not accessible by road. To get the most out of your visit, aim to explore both: the Northern Pantanal (via Cuiaba) and the Southern Pantanal (via Campo Grande).

Here are the top 10 Pantanal adventures to add to your Brazil holidays. Most of these destinations can be visited independently, or you can opt for an organized tour and have all the logistics taken care off. Another benefit of an organized tour is that you will have the same experienced guide for most of your trip instead of relying on the guides employed by the lodges.

The only road to traverse the northern Pantanal in Brazil, the Transpantaneira is no more than a raised dirt road stitched together by 122 wooden bridges. The 147-km road connects the small town of Poconé (103 km from Cuiaba airport) with the fishing community of Porto Jofre. But the Transpantaneira is more than just a road, it is a wildlife destination in itself.

Thousands of storks, egrets, herons, hawks, vultures and kingfishers wade, hover and dart among the sparse vegetation of the flooded savannah. Hundreds of caimans bask in the scorching sun. Capybaras and Marsh deer wade across the wetlands and Giant anteaters amble among the termite mounds. The abundance of life along the Transpantaneira is astonishing. It is the perfect start to your Pantanal adventure.

As wild as it is, most of the Pantanal is privately owned by small-scale cattle ranchers and soybean farmers. But since the Transpantaneira opened up the Northern Pantanal, a steady flow of tourism provided a new stream of revenue for the local community. Many cattle ranches reinvented themselves as eco-lodges, opening up their land to wildlife watchers.

The rustic Pouso Alegre is one such eco-lodge, well known for its population of the Threatened South American tapirs. You can watch these gentle creatures emerge out of the forest at sundown to take a drink at one of the watering holes.

The tapirs, of course, are only the beginning. Pauso Alegre is home to Giant anteaters, armadillos, capuchin monkeys and marmosets, crab-eating foxes, brocket deer, agoutis and a spectacular variety of birds from macaws and toucans to parrots and hummingbirds.

To get a bird’s eye view of the Pantanal, visit the observation towers at Pouso Araras, another cattle ranch-come-ecolodge along the Transpantaneira. Much more luxurious than Pouso Alegre, Araras lodge is home to the same wildlife species, but it offers a different perspective. The lodge has three observation towers located at strategic points near the watering holes.

To maximize the wildlife sightings, visit one of the towers at dawn to see both: the nocturnal species taking the last drink before turning in for the day, and the diurnal species starting their day.

Pousada Piuval is another up-market eco-lodge (check availability here) with spectacular wildlife watching opportunities. There is even a pair of Blue and Yellow Macaws nesting in the trunk of a dead palm tree by the swimming pool.

But the most tranquil experience in Piuval is a sunset canoe ride down the still surface of a narrow waterway snaking its way across the property. As you glide along the river, past the slumbering caimans, you’ll have a chance to watch hundreds of birds settling in for the night as the giant orb of the sun dips below the horizon.

Once the sun is gone, hundreds of fishing bats emerge from their roosts and race past you, just above the surface of the water. And when the last squawks of the birds die down in the fading light, a serene stillness envelops the river. This kind of quiet you can only experience in the wilderness.

Watch the night sky over the savanna

Before your turn in for the night, take the chance to appreciate the billions of stars twinkling above the dark savannah. Away from the city lights, the night sky in the Pantanal is relatively free from light pollution and you can often see the band of the Milky Way arching across it.

If you have a tripod with you, aim your camera at the sky, set a high ISO and leave the shutter open for about 20 seconds. You will be amazed by how much the camera can see in 20 seconds.

Go on a jaguar safari at Porto Jofre

Lying on the bank of the Cuiaba River, where the Transpantaneira comes to an abrupt end, the small fishing community of Porto Jofre is the jaguar watching capital of the world. There are so many jaguars living on the banks of the river, that the sightings are virtually guaranteed.

Thanks to the abundance of prey, living on the riverbank, the jaguars do not have to wait for the cover of darkness to go looking for their dinner. It is the daytime activity of the river jaguars that makes Porto Jofre the best place to see wild jaguars in Brazil, or anywhere else for this matter.

The river is not all about the jaguars of course. You are also likely to meet the endangered giant otters, breeding bird colonies, more caimans, capybaras, birds and maybe even a green anaconda. If you are planning to visit the Pantanal as part of your Brazil holidays, make sure that Porto Jofre is on your itinerary.

The river is not all about the jaguars of course. You are also likely to meet the endangered giant otters, breeding bird colonies, more caimans, capybaras, birds and maybe even a green anaconda. If you are planning to visit the Pantanal as part of your Brazil holidays, make sure that Porto Jofre is on your itinerary.

Take a scenic flight over the Pantanal

The landscape of the Pantanal is so vast, that to fully appreciate it, you need to see it from the air. There are a few options for scenic flights in the Pantanal. To see the northern expanse of the wetland, you can take a 1hr flight from Pocone and soar over the flooded savanna and Cuiaba river – the land of the jaguar.

In the Southern Pantanal, you can take a flight from Campo Grande to one of the eco-lodges for the next part of your Pantanal adventure.

Look for pumas at Barranco Alto

The southern Pantanal is a greener landscape than the northern reaches of the wetland. It is dominated by the rich pasture land and savanna, peppered with countless termite mounds – the perfect habitat for one of South America’s oddest creatures – the Giant anteater. You can watch these shaggy giants amble from one termite mound to another as they gorge on nutritious insects.

The lodges in the southern Pantanal all seem to have their own wildlife specialty. Barranco Alto eco-lodge, for example, is the best place in the Pantanal to spot a puma.

If you have seen BBC’s “Jaguars: Brazil’s Super Cats“, you are familiar with the work of Onçafari, a jaguar conservation initiative based at Caiman eco-lodge. The story of the documentary followed the teams’ successful efforts to re-introduce two orphaned jaguar cubs into the wild at Refugio Ecologico Caiman. The first time such a re-introduction has been attempted.

The team of Oncafari is working on habituating wild jaguars to vehicles and human presence to promote jaguar tourism in support of wildlife conservation. You can appreciate the team’s efforts on Onçafari Jaguar Safari.

The fields are surrounded by a large tract of intact savanna that is home to an abundance of wildlife. Anteaters, giant and small, armadillos, jaguars, pampas cats, pumas and even maned wolves are occasionally spotted on the property.

Have you visited the Pantanal? Share your thoughts and tips in the comments below.

More on Finding Wildlife in Brazil

15 thoughts on “Top 10 Pantanal Adventures For Your Brazil Holidays”