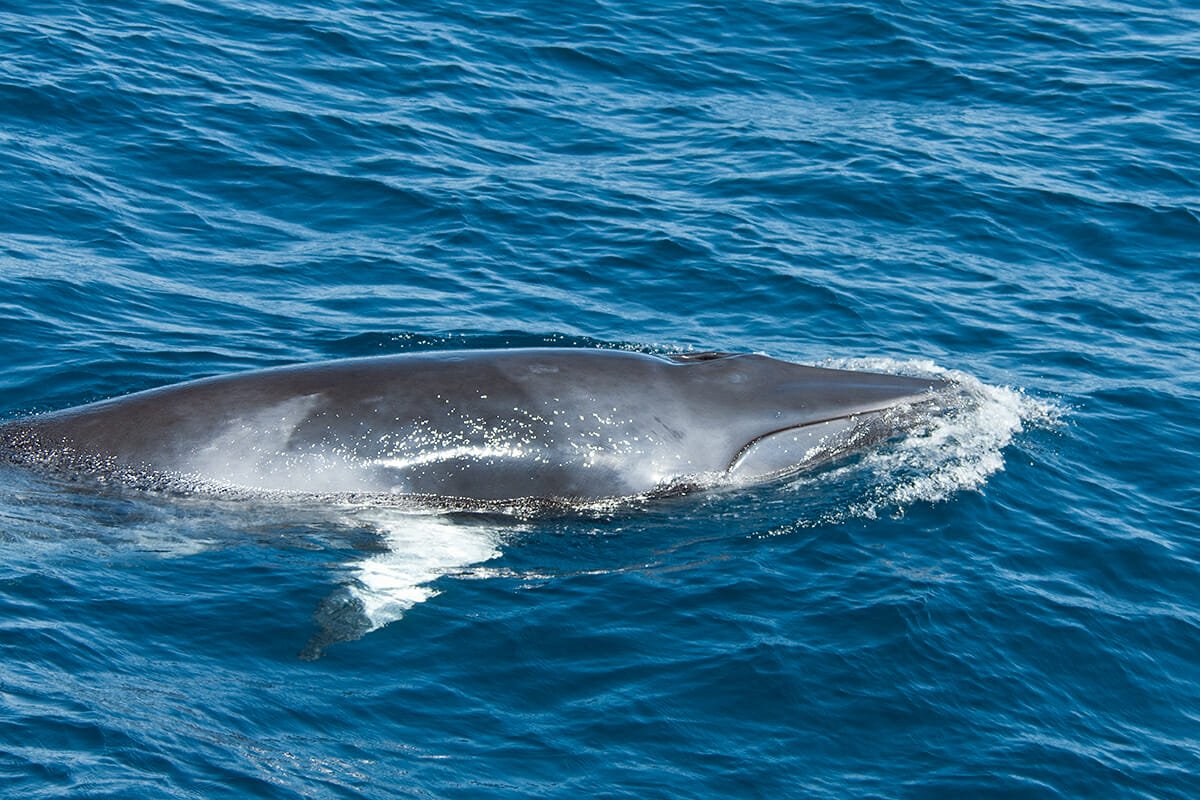 Fifteen nautical miles off the coast of NSW the world’s largest seabird – Wandering albatross soars effortlessly on thermal updrafts, skimming the surface of the ocean with the tips of its incredibly long wings. It appears totally content in its utter solitude in the vast expanse of water and sky.

It is a warm and sunny spring morning and I am on board Zane Grey heading out on a Pelagic Wildlife Watching tour with Sydney Pelagics & Nature Tours. We left Sydney Harbour at 7 am heading for the Brown’s mountain – a small submarine mountain about 50 kilometres east of Sydney.

As we left the harbour, the crew set up a trail of fish offal behind the boat and before long we were followed by large numbers of frenzied Silver Gulls and a few Great Cormorants. Once we travelled pass the heads a motley crew of Wedge-tailed, Short-tailed and Fluttering Shearwaters joined the ranks of our camp followers. A few Australasian Gannets and an occasional Crested Tern flew by overhead.

It is late October and the Humpback whale migration is in full swing. The trademark double-streamed spray of the whales’ blow frequently erupts from the surface of the water, though none close to the boat.

Into the Open Ocean

We don’t follow the Humpbacks. There is a number of whale-watching operators that offer cruises to watch Humpback migration close to shore. Our aim is to head out further into the open ocean and to see critters that are not commonly encountered when whale watching from Sydney.

For a while, nothing much is happening, and then a huge school of fish appears in the distance and somebody spots a fin. We peer at the surface, but the animal doesn’t come back. Half an hour goes by and we come across another school. The water is churning at the surface. Another fin… We wait again, but the sea decides to keep its secrets for now.

Once we are sufficiently far out at sea, our following starts to drop off, but other creatures appear out of the vast blue:  a breaching Marlin, a wonderfully bizarre Southern Ocean Sunfish and a couple of Australian fur seals. A young Shy Albatross and an immature Black-browed Albatross follow the boat for a while.

As we arrive at the Brown’s mountain a Southern Giant Petrel makes a few passes over the boat. A few Providence Petrels appear seemingly out of nowhere and disappear just as inconspicuously. But apart from the petrels, it is incredibly quiet. Just the gently undulating ocean and the clear sky stretching as far as the eye can see.

Perhaps counter-intuitively, this brings to mind images of Australian desert with sand dunes rolling out toward the horizon and not a single movement, not one sign of life can be seen.

The captain decides to motor out into deeper water, hoping to find some more animal activity. We stop about 5 nautical miles east of the Brown’s mountain and set up another berley slick.  The irresistible fishy aroma soon attracts a flock of Wilson’s Storm Petrels, a few Providence Petrels, Wedge-tailed Shearwaters and an occasional Great-winged Petrel.

Our excitement levels pick up when a Wandering Albatross approaches the boat and settles on the slick giving us excellent views for a good 15 minutes or so. These birds have the largest wingspan of any living bird, reaching 3.1 meters on average. As a result of such impressive wingspan, they are capable of remaining in the air for hours without flapping their wings. In fact, they spend most of their lives in flight, landing only to breed and to feed.

As nothing else is happening, we start to slowly make our way back. And then, just as I am about to resign to the fact that I won’t be seeing any new whales on this trip, we spot a large mammal swiftly swimming towards the boat. Frenzied excitement infects everyone on board, as the captain stops the boat and cuts the engines.

We wait… And as the animal surfaces again, much closer to the boat, we see that it is a Dwarf Minke whale (Balaenoptera acutorostrata).  These whales are not often seen off Sydney, probably because they do not raise their flukes above the water and their blows are quite inconspicuous.

As we continue to drift quietly, the curious whale approaches the boat and settles into a circling pattern around the vessel.  It is moving quite fast, more like a dolphin than a slow-moving baleen whale.

It makes a few laps around the boat and each time it surfaces we can see its long snout, then its entire head followed by the rest of its body. The white patches around its dorsal fins are visible even when it is completely submerged. We stay with the whale for more than 20 minutes and then reluctantly continue on our journey home.

In the end, the sea relented and revealed some of its secrets. Seeing the Dwarf Minke Whale was as exciting as coming across a pod of False Killer Whales a couple of years back, in more or less the same part of the ocean. There is a whole different world out there in the open sea that is entirely fascinating and not often encountered.

On the way home, we are joined by a pod of Bottlenose dolphins. They ride the bow wave and the wake of our boat seemingly happy for the chance to interact with us.

The Pelagic tour is a full-day adventure out on the ocean. If you are prone to seasickness, you may not enjoy it as much, as the swells are larger out in the open ocean than they are in the sheltered bays and harbours. To ease yourself into marine trips, start with a half day whale watching tour. These tours do not go too far from the shore as they generally follow the Humpback whales during their bi-annual migration.