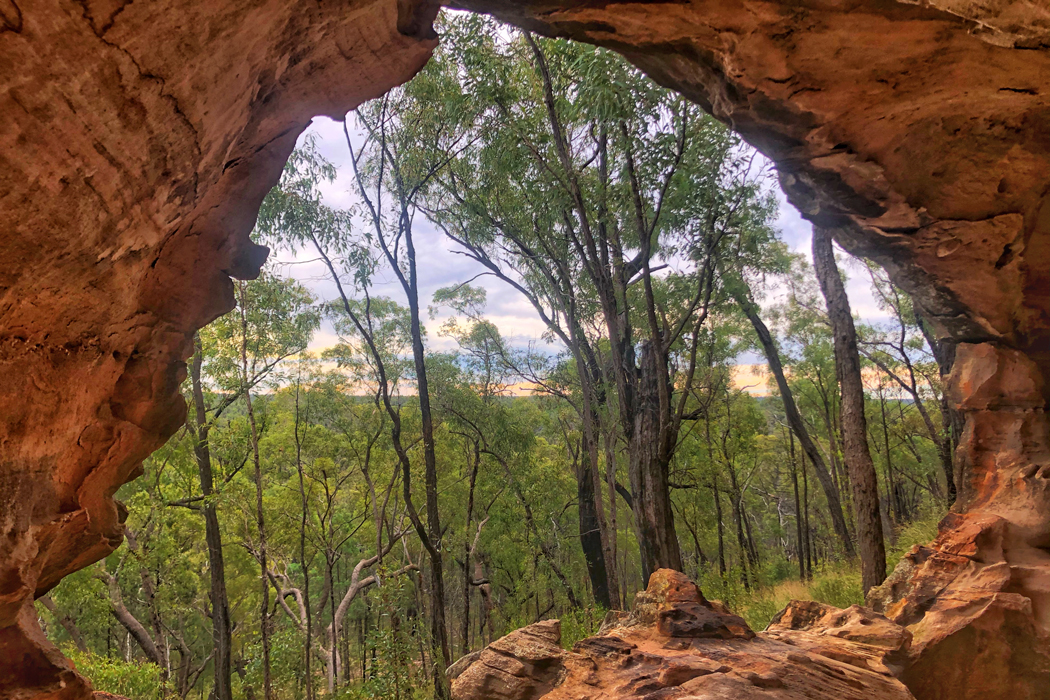 Surrounded by the unbroken horizons of the great Western Plains in north-central NSW, Pilliga forest is the great expanse of semi-arid woodland dominated by the Cypress Pine, Iron Bark, and Eucalyptus. At 5,000 km², it is the largest continuous forest in the state.

Almost the entire 100 km of Newell Highway between Coonabarabran and Narrabri travels through this expansive woodland. So if you are driving between the Warrumbungle and Mount Kaputar National Parks, you’ll be driving mostly through Pilliga forest.

There are also plenty of unpaved red dirt roads in Pilliga, including 8 bird routes – the forest is the birdwatchers mecca with at least 240 species to spot.

The epic expanse of Pilliga forest hides two very different secrets: Sandstone Caves and Sculptures in the Scrub. The caves are some of the most spectacular above-ground caves I have seen in Australia. If you are into photography, set aside a couple of hours for visiting the caves. They are a photographer’s dream.

Sculptures in the Scrub are, as the name suggests, not an entirely natural attraction – it is a set of 5 sculptures created as a collaboration between artists and the Gamilaraay Elders – the indigenous custodians of the land. The sculptures have been placed at the top Dandry Gorge overlooking the gorge and the beautiful Pilliga forest.

Before you start exploring Pilliga forest, it is worthwhile to drop into Pilliga Forest Discovery Centre in Baradine (50 Wellington Street). Baradine is the quintessential country town a 30-minute (46km) drive from Coonabarabran. There is not too much to see and do in town but it is a convenient base for exploring Pilliga forest if you are spending a few days in the area.

Apart from maps, birdwatching routes suggestions, and directions to Pilliga Sandstone caves or Sculptures in the Scrub, the Discovery Centre has an impressive display that takes you through the 150-million-year history of Pilliga Forest. Less impressive are the stuffed animals on display, probably aimed at teaching people about local fauna. I find them quite gory and violent, to be honest. But other people seem to enjoy looking at them.

Pilliga Forest and the surrounding areas are the ancestral home of Gamilaraay people and what you can do at the Discovery Centre is book your Sandstone Caves cultural tour led by an experienced local Gamilaraay guide. You can also book the $22 tour online.

How to find Pilliga Sandstone Caves

You can also visit the caves independently. Just keep in mind that Pilligasandstone caves are not signposted from the Highway at the request of the Aboriginal Elders.

To reach them from Coonabarabran (35km), take the Newell Highway north until you reach the turn off to a dirt road marked Yaminba Trail 3.7km beyond the Cusack Creek crossing. The car park is 1km down the Yaminba Trail.

From the car park, a 1.7 km easy walk takes you through the forest to the base of the large sandstone outcrop with a series of caves spread over a few hundred meters.

As soon as you see the towering outcrop, you get a sense that this landscape is pretty old. The sandstone that makes up the outcrop was formed on the bottom of Jurassic lakes, about 150 million years ago. For million years the skeletons of aquatic organisms were deposited on the bottom of these lakes creating vast layers of sediment. Then, much more recently, between 17 and 13 million years ago the great Warrumbungle and Nandewar volcanos re-arranged the local geology creating the outcrop you see today.

Over the following 13 million years, wind and rain eroded the rock face creating an intricate series of caves, some of which are many meters high and others are joined together by the passages in their common walls. You can see how these caves would be the perfect home for the Indigenous people in the past.

The same forces that carved the caves from the sandstone cliff continue to shape them even today. You can see how fragile the layers of the sandstone are in the large cave about halfway along the face of the outcrop, where enough fine-grained material has brushed off the cave walls to accumulate on the floor creating a soft sandy substrate.

This large chamber has the most mesmerizing patterns and colours in its creamy-white walls and ceiling. If you imagine people living in Pilliga caves, this chamber could’ve been the ceremonial centre of the complex with its incredibly high ceilings and a natural elevated ‘stage’ formation. Of course, I could be completely wrong and since we didn’t take the guided tour, I will never know. But in any case, the shape and size of this chamber imbue it with significance.

Another set of caves that’s particularly fun to explore is the one with two chambers merged together by a large opening in the wall that separates them. In modern terms, this would be a two-bedroom cave with floor to ceiling glass-free windows. Late in the afternoon, they look especially striking looking out onto a golden sky.

As you explore the caves, keep an eye out for the forest’s wild inhabitants. Birds are the most conspicuous denizens of Pilliga forest. The unique location of the forest in the ‘meeting place of east and west’ means that it is home to a mix of species from the birds of the arid outback to the species found in the humid forests of the coastal regions.

Mammals are harder to spot since most Australian mammals are quite small and nocturnal. But if you visit the Pilliga early in the morning or late in the afternoon you can spot red kangaroos, eastern grey kangaroos, red-necked wallaby, koalas or even a Pilliga mouse, or a yellow-footed antechinus.

Pilliga is home to the typical reptiles of Australian arid zones – shingleback lizards, goannas and some cool frogs like the crucifix and water holding frogs that burrow underground to wait out the dry conditions and emerge to breed after heavy rains.

Sculptures in the Scrub

38 kilometres away via Newell Hwy and No 1 Break road, Sculptures in the scrub are a different kind of attraction. Here five sets of different sculptures are set in strategic locations along the top of the escarpment high above Dandry Gorge.

The sculptures perfectly blend in with the surrounding landscape enhancing the natural beauty of the gorge and simultaneously providing a record of the site’s significance to its early Aboriginal occupants.

The experience of Sculptures in the Scrub starts as soon as you turn off the highway onto the dirt road of bright orange sand. You are close enough to the Outback here to get the iconic Australian landscape of orange sand against the endless expanse of the bright blue sky. Of course, in Pilliga forest you also get many shades of green to brighten up the pallet even more.

Of course, the trouble with unsealed roads is that they get washed out after heavy rain, so it is a good idea to check the condition of the road with the Pilliga Forest Discovery Center before setting on your journey. Most of the time the road is perfectly good for a 2WD.

The walking trail starts at the car park and takes 1.2 kilometres to get to the last set of sculptures. Pilliga sculptures are all quite different but all of them perfectly fit into the surrounding landscape.

One of the most interesting pieces is the “First Lesson”. It is a bronze statue of a man holding his son on his shoulders looking into the gorge. It depicts the passing of knowledge about the country to the next generation.

Further along, there is a wonderfully bright “Connections” sculpture featuring a comet, Milky Way and the Rainbow Serpent – science and myth intertwined.

The last piece on the walk is a series of mosaic sculptures that describe how women in the Pilliga past and present have used natural resources.

There are detailed descriptions next to each set of sculptures explaining what they represent and what the artist wanted to convey. It is quite fascinating how natural beauty and human creativity combine in the Sculptures in the Scrub.

At the end of the sculptures walking trail, you have the option to return along the same trail or to follow the trail down into the gorge on a 3km loop trail along Dandry Creek.

The trail along the dry bed of the creek is a different setting entirely. Here you are walking through the forest in the shadow of the towering wall of the gorge.

If you happened to visit early in the morning, this would be a great opportunity to see some of Pilliga’s birds and during the summer months, a few reptiles.

The Western Plains surrounding Pilliga forest are known as the astronomy capital of Australia, a term that reminds me of the self-proclaimed UFO capital of Australia at Wycliffe Well in the Northern Territory. But while central northern NSW doesn’t get many extraterrestrial visitors, the night sky here is drop-dead spectacular. But even during the daylight hours, the unbroken horizons of the Western Plains create some spectacular skyscapes. And of course, the sunsets are absolutely gorgeous here too.

Sawn Rocks: Another stunning volcanic formation is the Sawn Rocks in the nearby Mount Kaputar National Park. Here you can see a striking example of rock formation called ‘organ-piping’. This unusual pentagonal shape of the rocks can also be seen in the Breadknife, but it is much more defined in Sawn Rocks. Organ pipes are formed when basaltic lava cools off slowly and evenly, allowing the crystals within the molten rock to align perfectly with each other.