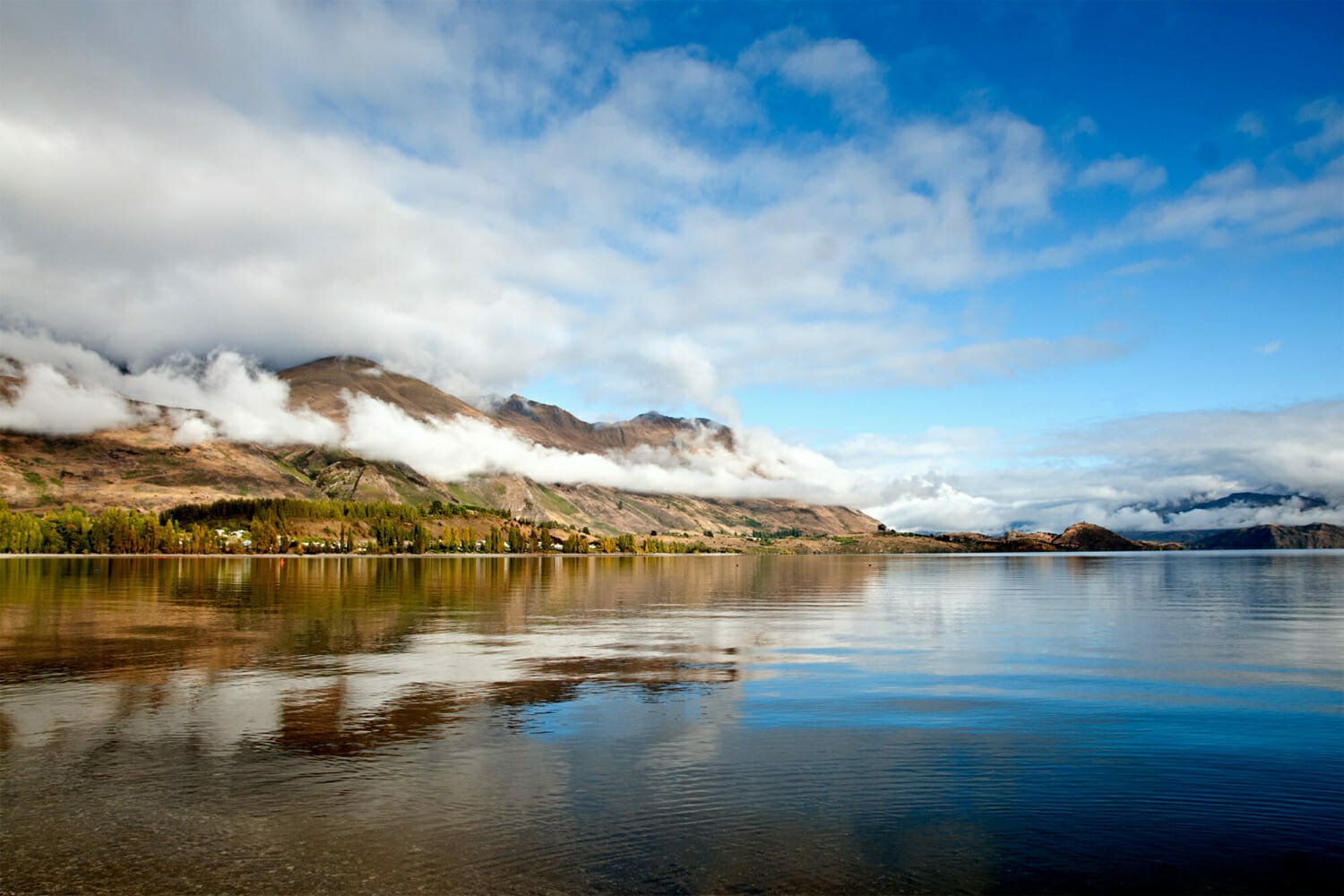 South Island is the land of incredible contrasts. From the lush rainforests of the Fiordland National Park, we headed to the snow-covered mountain tops of Fox Glacier in Westland National Park – another World Heritage area 329 km away.

As I have quickly come to realize, practically any road in New Zealand is a scenic drive. The trip from Queenstown to Fox Glacier was no exception.

Our first stop on the way out of town was completely unscheduled – it was a veterinarian’s paddock that attracted our attention. More to the point it was the eclectic mix of patients in the paddock – a strikingly coloured pig, a couple of goats and a deer foal – not your usual pet hospital.

Next, we drove through Arrowtown – a quaint little town just 45 minutes out of Queenstown, known for its old British charm. We planned to be back in Arrowtown later in the trip so this time we drove straight through and only stopped at the lookout to watch the morning fog lifting off the valley.

Our next destination was Wanaka – a small town at the southern end of Lake Wanaka. It is conventional in modern time to travel from one city to another, but in New Zealand, it feels like travelling from one lake to another.

The shortest route to Wanaka is over the Crown Range Road, which at 1076 meters above sea level is the highest paved road in New Zealand. There were a few straight stretches, but mainly it was a very winding road going up and down with hairpin turns. It was a challenging drive, but the views of tussock covered rolling rangers were amazing.

One thing I should mention about taking a road trip in New Zealand is that it is not going to be a cheap trip. Not only the car hire was pricey, but also the costs of petrol, especially in Wanaka. Here is a great summary of practical considerations for road tripping in New Zealand.

We stopped for lunch at Wanaka, spent some time by the lake and continued our journey north.

The first scenic highlight of this part of the journey was Lake Hawea. Even after seeing a fair share of glacial lakes, Lake Hawea looked impressive with its deep blue water set against the background of clear blue sky.

Once we left the lakes behind, the road entered the virtually untouched beech forests of Mt. Aspiring National Park crossing to the West Coast region via the Haast Pass, which at 562 meters above sea level is the lowest of the three passes traversing the Southern Alps.

We travelled through a dramatic combination of twists and turns across the rainforest country, past red tussock meadows, alpine rivers and waterfalls. From the pass, the road followed the Haast river through the region of towering peaks and steep slopes covered in thick forest.

The Haast township itself didn’t offer much apart from a roadside diner. But just out of town we came across some unusual-looking forest and shortly after drove across the longest single lane bridge in New Zealand.

From there the road headed for the coast. Flanked by Rimu forest and rows of flax the beaches of Bruce Bay are littered with driftwood from the surrounding forests.

From there the road headed for the coast. Flanked by Rimu forest and rows of flax the beaches of Bruce Bay are littered with driftwood from the surrounding forests. We spotted a pair of Sooty oyster-catchers while strolling on the beach.

From here the road headed back inland to Jacobs Creek through the coastal flats before eventually reaching Fox Glacier. Tucked into the forested foothills of the Southern Alps and framed by the towering peaks, the township of Fox Glacier is a cosy and charming place. It has an atmosphere of a remote and a very relaxed village and its entire existence seems to be dedicated to serving as a base for exploring the Fox glacier.

Shortly after arriving I was treated to an unexpected wildlife sighting. A brilliantly-coloured New Zealand Pigeon has landed on a tree right in front of me and was later joined by another. I watched them for about 15 minutes all the while thinking that even pigeons in New Zealand are spectacular!