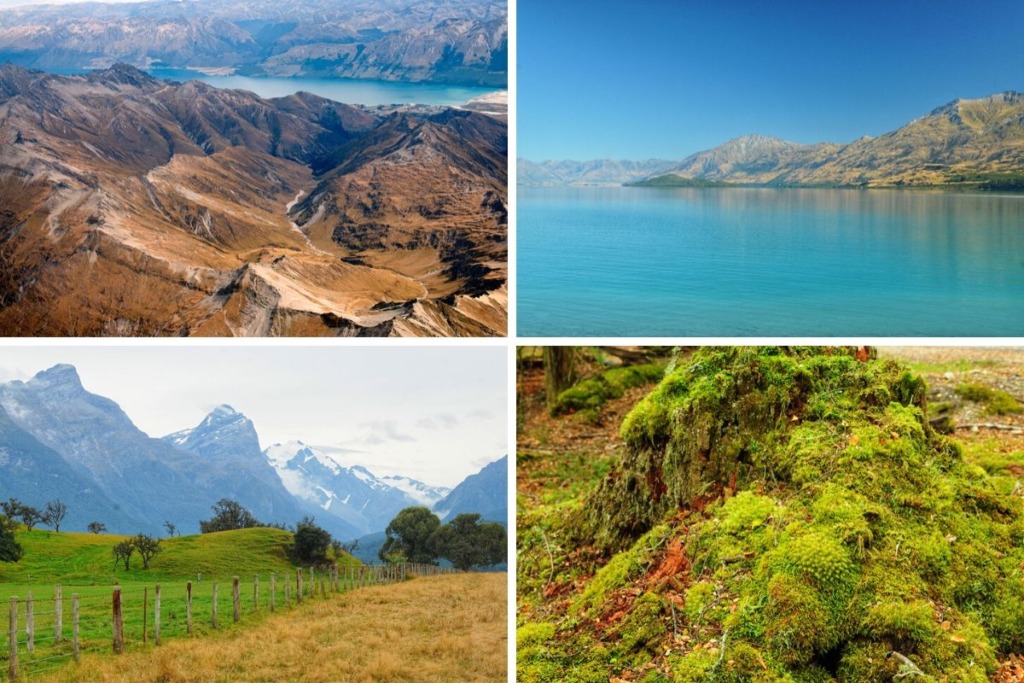 When most of us think about New Zealand, the first thing that comes to mind is the magnificent scenery portrayed in The Lord of the Rings movies. So not surprisingly, a week-long road trip through parts of the South Island feels like a journey into Middle-earth.

My friends and I travelled as a group of 4, all of us with different interests and fitness levels. So we decided to rent a car and explore the South Island independently, staying overnight in towns that we visited. An alternative would be to explore New Zealand in a campervan.

We started the trip in Queenstown – a cute little town perched on the edge of Wakatipu glacial lake and fringed by the mountains of the Southern Alps. It has a buzzing atmosphere of an alpine village and a population of 15,600 people – which is only 5,000 people more than the population of my Sydney suburb of Glebe.

There are plenty of things to do in Queenstown, but I had my priorities straight, and as the first order of business, I headed to Wakatipu lake to see what water birds were around. As expected, there were some New Zealand scaups and Pacific Black Ducks and some Black-billed gulls and Pied Cormorants.

And then out of the water came a Great Crested grebe! I’ve been chasing these birds from Russia to Australia but could never get close enough to them. And here they were – practically in suburbia, two adults and two young. These birds have some amazing courtship dancing moves that they synchronize with each other while running on the water’s surface. However, it was too late in the season for that.

For our first afternoon in town, we were happy to cruise around the tourist district of Queenstown and soak up the atmosphere. We had burgers at the iconic Fergburger (42 Shotover Street), strolled around the Marine Parade and the lakeshore, and checked out the adventure gear stores.

We ended the day in the frozen interior of Below Zero Ice Bar, where everything is made of ice, and the temperature is kept at a snippy -8°C. We were lucky to grab a deal for the bar on Groupon, although if you are on a tight budget, there are a number of inexpensive things to do in Queenstown, including scenic hikes and an underwater observatory.

Queenstown to Glenorchy via the Middle-earth

The following morning we headed on Queenstown to Glenorchy scenic drive, one of the island’s most beautiful drives and one of the easiest day trips from Queenstown. Glenorchy is a small town set against a background of lush beech forest and rugged mountain ranges 46 km north of Queenstown. Glenorchy’s natural beauty is quite popular with Hollywood filmmakers. Most notably, the area was used as a location for Isengard, Lothlorien and Amon Hen in the Lord of the Rings movies.

The first time we drove, this road fell on a rainy and overcast day, and the gloomy scenery brought to mind the darker moments of the LOTR films.

But despite the low-hanging clouds and swaths of mist hugging the peaks of the mountains, the entire drive was one continuous photo opportunity. About 10 minutes out of Queenstown, we arrived at Closeburn – the scenic area used as a filming location for Amon Hen (location on the map). This is where the Fellowship of the 9 split up at the end of the Fellowship of the Ring, where Boromir had fallen, Merry and Pippin were captured by the Orcs, and Frodo and Sam set off to Mt. Doom.

Somewhere along the lakeshore is one of the filming sites of the Dead Marshes that Frodo, Sam and Gollum had to cross on their way to Mordor. To see more LOTR filming locations, you can book a tour with Nomad Safaris LOTR tour that leaves from Queenstown, takes about 4hrs and visits 8 different filming locations.

Glenorchy is a stunning little town surrounded by towering snow-capped mountains, glacial lakes and ancient beech forests. And the town offers plenty of options for exploring its stunning landscape if you are staying in Glenorchy for a vacation.  You can ride across it on horseback with High Country Horses, take a scenic helicopter ride with Heli Glenorchy, go on a guided hike of Routeburn Track with Glenorchy Journeys, or take a jetboat ride along Dart River with Dart River Adventures. There is also skydiving, ziplining, mountain biking, electric biking, heli hiking and 4×4 tours.

If you don’t have too much time to explore the area around Glenorchy, one of the best things to do in town is a walk along Glenorchy Walkway through wetlands to the Glenorchy Lagoon. On a clear day, you can see the reflection of Mt Earnshaw reflected in the still waters of the lagoon. We left the lagoon for our next visit to Glenorchy, which happened to be on a bright and clear day.

There are also a couple of pubs, a cafe, a general store and some small shops in town, and an iconic red boatshed on the lakeshore.

The road from Glenorchy to Paradise is supposed to be even more spectacular than the road from Queenstown, but the weather remained gloomy, and some of the scenic beauty was lost behind the clouds.

The road took us past Glenorchy Lagoon towards the junction with Kinloch road and soon became unpaved. It took around 30 min to reach the road sign welcoming us to Paradise.

One thing I wanted to see in New Zealand, apart from the obvious landmarks, was the red beech forest – a cool and wet temperate rainforest with trees covered in a thick coat of moss. The Glenorchy to Paradise road travels through at least three patches of red beech forest. These beautiful areas were used as filming locations for Lothlorien in the Lord of the Rings films.

The mountains north of Paradise are where the scenes for Isengard and Lothlorien were filmed. And the towering peak of Mt Earnshaw, visible from the road, was the filming location for crossing the Pass of Karadrass. And even if you are not visiting a particular filming location, the stunning scenery around the Glenorchy-Paradise area is as Middle-earth as it gets.

The Lord of the Rings is not the only movie that took advantage of Glenorchy scenery. Other movies filmed in the area include Vertical Limit, The Chronicles of Narnia: Prince Caspian and X-Men Origins: Wolverine.

On the way back to Glenorchy, take a detour to Kinloch – a small village that sits at the northern end of Lake Wakatipu. Kinloch is home to about 300 residents, so it is a very quiet, even tranquil place. At the shallow end of the lake, the water was crystal clear and had a turquoise tint to it.

The popular 71km-long Great Lake Trail can be taken either on a mountain bike or on foot that would bring you into the bushland surrounding Lake Taupō. The trail is a gradual climb with great views across Lake Taupo from the top.

Apart from the trail and the lake itself, there wasn’t much else to do at Kinloch, so after a brief stop, we continued on our final road trip from Glenorchy to Queenstown.  We have driven that road so many times over the past week that it was sad realizing that we won’t be back on it for quite some time.