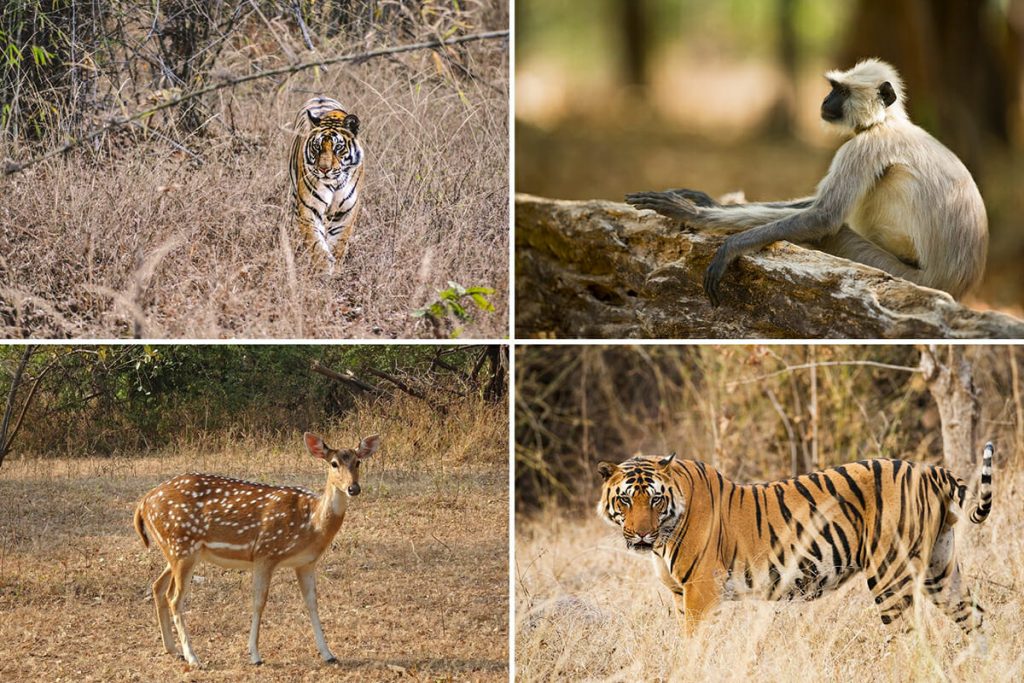 After only a few days of travelling in India and already feeling completely overwhelmed by the intensity of the place, I was in need of a few days in the countryside away from the noise and chaos of Indian cities. That’s exactly what I got when my tourist taxi pulled into Sawai Madhopur. The town had a lovely quiet atmosphere, a rarity in India and I breathed it in with satisfaction. I wasn’t here just to enjoy the countryside though. I was here to spot the famous Bengal tigers and do some wildlife watching on a Ranthambore National Park safari!

It’s quite important that the population of tigers does not grow too much more, tigers are territorial and will fight to the death to defend their zone in the jungle. Ranthambore is one of the best places in India to spot tigers and many other species of wildlife make the park their home such as sloth bears, leopards, many species of deer and thousands of unique birds. As such Ranthambore has become one of the most popular tourist spots in Northern India and definitely the best place to book a tiger safari.

When I found out you could go on a jungle safari and spot tigers in India, I was all over it, this was right up my street and going on a safari was a bucket list item I was itching to tick off. I made sure that I could comfortably fit Ranthambore National Park into my three week India itinerary and started to plan my trip with this in mind.

Sawai Madhopur has a train station that is well connected to the adjacent states and cities. You can get a train to Sawai Madhopur from Delhi, Agra and Jaipur. Alternatively, you can hire a driver in Delhi, like I did, and be taken right to the doorstep of your hotel with no hassle whatsoever. Once you’re in Sawai Madhopur there won’t be any shortage of booking offices for your safari experience and just about every hotel will offer safari booking services but you should definitely book in advance. The safaris are very popular and you wouldn’t want to come all that way to be disappointed.

When I first arrived in Sawai Madhopur I was advised by Harpal, my driver, that I might not be able to go on my safari the next day as there was currently a strike happening. I was confused and gutted, a strike!? Who would be striking? I asked Harpal. The strike was started by the safari vehicle owners, drivers and booking agents. They were unhappy with the current booking system in place and wanted the national parks visitor intake expanded to allow more Jeeps to enter the park and thus they could earn more money.

The strike was due to last a whole week and a meeting with the park authorities and protestors was arranged for that evening. There was nothing I could do but accept it although I couldn’t hide my disappointment. The only reason I had come here – almost 300km out of my original route – was to go on safari and now it wasn’t looking likely. So the next day I woke up to find out that sure enough my safari had been cancelled.

Harpal suggested that we drive into the park and stop before the gates to let me have a look around the Fort that overlooked the park and see if we could spot any wildlife on the drive. Amazingly, we saw crocodiles, wild boars and Indian Gazelles on that short trip and not even inside the gate of the National Park yet!

I was feeling content and happy when I got back to my hotel. I had gotten at least a glimpse of some Indian wildlife outside the gates of Ranthambore although my mind still lingered on tigers. As I was preparing to go to bed Harpal phoned me with the news that a tiger safari was on the cards for tomorrow morning! The park authorities had agreed to reconsider the booking system and the number of tourist permits allowed and the protestors had called off the strike. Instead of lasting a week the strike had only lasted two days. This day was getting better and better!

The next day I woke up and put all the warm clothes I had with me on my body, layering up until I was nice and cosy. The mornings are very chilly in this part of India during November. My open-topped Jeep picked me up at 6.30am and we picked up another 3 people on route to the Ranthambore National Park safari.

The Jeep sped through the streets of the town, and the freezing air whipped the bare skin of my face and hands but the ride was exhilarating. Entering the park gates we slowed to a crawl and our tickets were checked by a park ranger, then we entered. The Jeep sped off again away from the cumbersome open-topped buses they call ‘canters’ that held about 20 people. The Canters can’t go off the track and meander through trees like the Jeep so I was glad I had picked the Jeep option although it was more expensive.

About 15 minutes into the park, our two guides came to a decision to veer off the track slightly to a wooded area. We came to a halt and peeking through the trees we could see the shapes of three tigers.  It was a mother and her two fully-grown cubs. They were lounging on the ground; the trees were sparse and you could see them pretty well through them. I was gobsmacked, I wasn’t even sure we’d see one tiger but three!

We stayed and admired the tigers for about 10 minutes and then drove off to leave them in peace as another Jeep pulled up. 5 minutes later our guides frantically swing the jeep off the track again, this time we were down by a small stream and peeking through the long grass right before us only 10 metres away was a huge male tiger, he looked right at us crouching in the grass.

I stared right into the beautiful beast’s face; I was looking at a tiger! It stared us down steadily and made a slight move forward. This made our guides a bit fearful, they backed up the Jeep slowly and steadily until we were a safe distance away and then we swiftly accelerated out of there. It wouldn’t be the first time these animals had stalked a Jeep full of tourists like it was dinner.

We then went off in search of the elusive leopards that hide in the branches of the trees in the jungle. Leopards are very shy animals and a lot harder to spot than tigers. They’re smaller, blend in better and have the advantage of being able to climb trees. After about 15 minutes of driving slowly around a densely wooded track, we gave up on the search for our spotted feline friends.

We took a quick detour to a toilet block in the park where we had a very inquisitive little bird join us momentarily. Perched on top of the windscreen of the Jeep, it appeared to be examining the vehicle for any food it could pinch from us. He flew away as we started our journey back to Sawai Madhopur. On the ride home, we saw a blue bull, which is similar to a huge antelope and some other type of deer that I couldn’t identify at first glance.

All in all, I couldn’t have hoped for a better safari considering 24hours prior I hadn’t been able to go ahead with it. Ranthambore National Park truly is a gem of Northern India and although the tigers steal the show, there’s so much more to enjoy in the park so don’t worry if you don’t spot a tiger.

The safaris are conducted in such a way as to not intrude too much on the tigers’ habitat. A safe, respectful distance is kept between you and the tigers at all times and you are not permitted to bring any food or drink into the park. My Ranthambore National Park safari was the highlight of my full trip to India and it’s only got me itching to do more safaris in the future.

Rhianne is an adventure-loving travel storyteller from Scotland. She has a passion for road trips, The Great Outdoors and her camera for always capturing the moment. You can find her blog at WanderfullyLiving.com