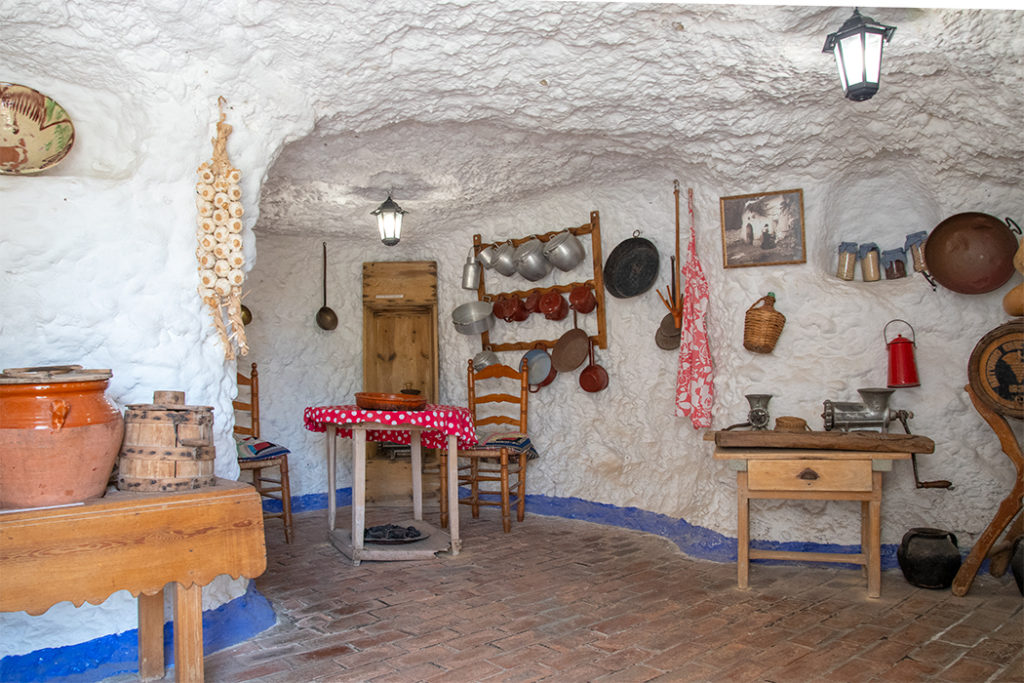 If you are planning a trip to Granada, you know all about the Alhambra, maybe a couple of other Moorish monuments, the Albacin neighbourhood, the Granada cathedral. But have you ever heard about the Cave houses in Granada?

What are Sacromonte Caves?

Located in Sacromonte, Granada’s old Gypsy neighbourhood, Sacromonte cave houses are a complex of whitewashed caves dug into the side of the hill. These caves provided safety for their inhabitants (mostly Spanish Gypsies) not only from the scorching Andalusian sun and winter rains but also from religious and ethnic prosecution.

Today, Sacromonte caves are an ethnographic museum (Sacromonte Caves Museum or Barranco de los negros), one of Granada’s best-kept secrets, and one of the most unusual places to visit in Granada.

The museum features a total of 11 caves or houses, most of which are made up of a couple of rooms complete with some basic furniture and various tools of the trade. Each cave has a theme: a typical dwelling, a stable, basket weaving cave, kitchen, ceramics workshop, and textiles workshop. Together, the caves paint an extraordinary picture of a life you could hardly imagine.

Who lived in Granada’s Caves?

Gypsies first arrived in Granada as camp followers to the armies of the Catholic Monarchs that marched victoriously on Granada after expelling the last Moor dynasty from Spain. They were allowed to remain outside the city walls on the condition that they abandoned their nomadic lifestyle and pick up a trade.

After the Civil War, in the 1940s and 50s, farmers from rural parts of Granada fled to the hills of Sacromonte, forced by famine to abandon their lands. The community swelled up to its maximum size.

But in 1963, six months of torrential rains destabilized the soil, and the entire hill was in danger of collapsing. Probably not wanting the responsibility for inaction, the civil authorities forcefully evicted the residents of Sacromonte caves, ordering them never to return. And that was the end of the Gypsy history of Sacromonte caves.

How to get to Sacromonte Caves?

One of the reasons Granada’s cave houses are not more popular with tourists is that they are tucked away on top of a steep hill above the backstreets of Sacromonte. You do have to put in the effort to climb the hill, but as a perk, you get the best views of Alhambra from Sacromonte Hill.

The easiest way to get to Sacromonte caves museum is to take the minibus 34 from Plaza Nuevo or anywhere along Carrera del Darro to Camino del Sacromonte 89 (bus 34 route map). The bus runs quite frequently, and you can buy your ticket (1.40 euros) on the bus. From the bus stop, it’s a short but steep climb to the top of the hill.

If you prefer to wander on your own two feet, follow Carrera del Darro all the way to the end, then turn left onto Cuesta del Chapiz and turn right onto Camino del Sacromonte. Follow Camino del Sacromonte until you see signs pointing toward the museum (Google maps pin).

You can also visit Sacromonte caves on a tour. There are a couple of options: One is a walking tour with a local guide that will take you on a wander through Albacin, Sacromonte and the Caves Museum. Or, for something a little more low-key, you can lose yourself in traditional dance and cuisine on Sacromonte Caves Flamenco Show with Dinner.

Where to Stay in Sacromonte

There used to be a cave hotel not far from the museum but sadly it’s no longer in operation. This of course doesn’t mean that you can’t stay near the caves. The gorgeous Solar MontesClaros hotel offers Arabic-styled apartments with extraordinary views of Alhambra on one side and the rooftops of Albacin on the other. The bedrooms have wall-length windows so you can enjoy the views from the cozy comfort of your bed.

As you make your way up Sacramento hill, your efforts will be rewarded first with the best view of Alhambra in all of Granada and then with a gorgeous view of Sacromonte with its whitewashed buildings set against forested hills and enormous blue sky.

The higher you climb, the further you get into the backwaters of the neighbourhood, and it may start to feel like you are going nowhere. But trust the signs; the cave houses are not far.

When you get there, you’ll arrive at a very informal but nonetheless unexpected reception counter where you buy your ticket (5 euro) and get a basic introduction to the site (in Spanish).

The caves are arranged in a semi-circle skirting the bottom of the hill. I would’ve compared the caves to the set of Hobbiton in New Zealand if it wasn’t for the fact that real people, families, had to make a living in these barest conditions.

While, at first glance, the setting of caves dug into the hill appears cute and picturesque, it hides none of the hardship and deprivation that living there would’ve entailed.

Some of the caves, for example, have an opening to the adjoining ‘stables’ so that the inhabitants could benefit from the body heat generated by their animals. Caves are known for keeping constant cool temperatures which would’ve been lovely in summer but very challenging during the colder months.

As you explore the site, walking from one cave into another, you get a picture of different aspects of life of this community, from a typical home to a blacksmith’s shop to a community garden. There is even a pond with half a dozen frogs. The caves feel very lived-in. The haunting family photos displayed on the walls in some of the caves make the place and its people even more real.

There are fantastic information displays throughout the site about the cultural and ecological history of the area. I’m usually not a fan of reading extensive narratives on the museum info displays, but I enjoyed the storytelling way the information was presented here.

Two of the caves are set up with projectors that play documentary footage taken in this community at least 50 years ago. It seems hard to believe that in the age of the early video cameras, people lived in caves without electricity, running water, doctors or even an acknowledgement of their existence.

To add insult to injury, from Sacromonte the inhabitants of the caves could always see the magnificent royal palace of Alhambra, the ultimate symbol of wealth and power in Granada.

Sacromonte Gypsies were famous for their own unique flavour of flamenco – a dance saturated with emotion, with defiance in the face of hardship and disadvantage. You have to watch the video playing in the ‘flamenco’ cave to see what this type of flamenco is all about. You see it in the dancers’ eyes.

One of the most colourful figures of Sacromonte was ChorrojumoorMariano Fernández Santiago who lived in the second half of the 19th century. As a self-proclaimed Gypsy King, he made his living by escorting tourists around the Alhambra, entertaining them with stories of his glorious past.

Once you are done exploring the caves, you can have a drink and a snack at the museum cafe before heading back down the hill.

Around the Caves Museum

Another fascinating place to explore in Sacromonte is the monumental XVII century Sacromonte Abbey. It sits on top of another hill, and apart from the sprawling building complex, it houses a beautiful art collection and a few ‘holy’ caves. And the views from the Abbey are obviously stunning.

To reach the abbey from the Caves Museum, walk back to Camino del Sacromonte, follow it until you get to Santo Sepulcro Church, pass through the arch and follow the road until you reach the main building.

4 thoughts on “Sacromonte Caves: The Best-Kept Secret in Granada”