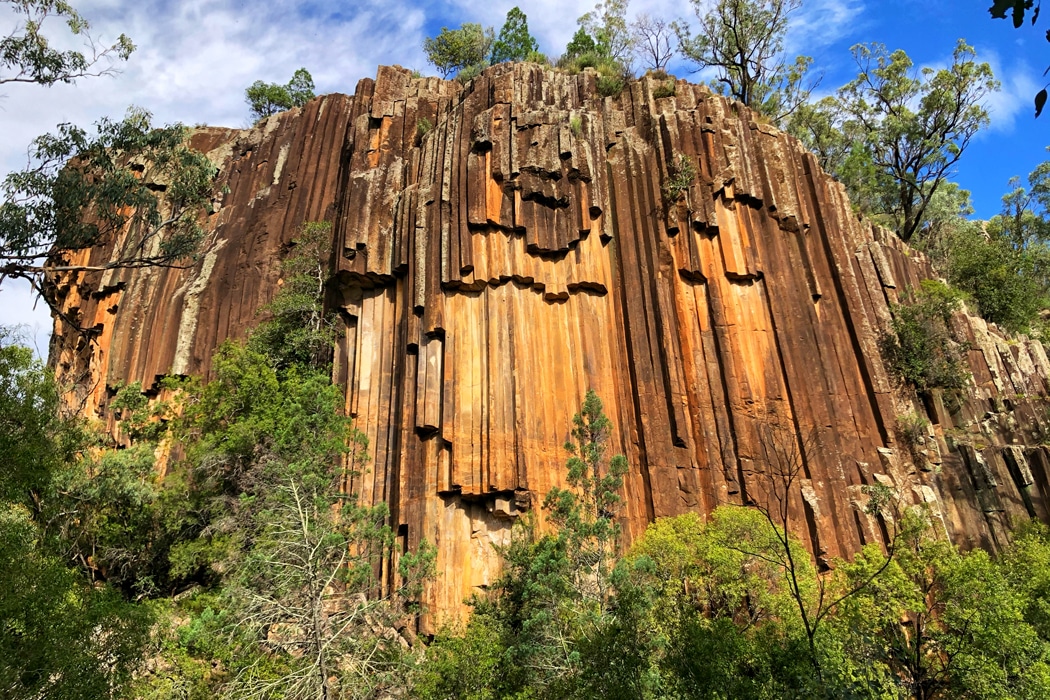 Located in the northern section of Mount Kaputar National Park, Sawn Rocks is a 40-meter-high cliff face composed of perfectly pentagonal (five-sided) columns. Its appearance is so bizarre that you inevitably suspect artificial forces in its creation. This is probably how the early explorers felt when they named the rocks. The cliff face looks like a giant petrified organ towering over a creek.

Sawn Rocks are one of Australia’s finest examples of a rock formation called ‘organ-piping’ and a reminder of the area’s volcanic past. Between 21 and 13 million years ago, this part of the continent was dominated by two massive volcanos: Warrumbungle that formed Warrumbungle Ranges and Nandewar that shaped the landscape of Nandewar Ranges, including Mount Kaputar National Park.

The striking pentagonal ‘organ pipes’ of Sawn Rocks were formed when basalt lava flow from Nandewar volcano cooled and hardened, forming cracks on the surface like those you see when the parched earth cracks during droughts. These cracks, under certain conditions, propagate downwards and over time form columns perpendicular to the flow of lava.

The slower the cooling, the larger and more defined are the columns.  This process effectively happens inside the volcano and it took Bobbiwaa Creek millions of years to cut its way from the top of the plateau (that was level with the top of Sawn Rocks) to its current bed at the base of the cliff. As the water and wind eroded the softer layers of rock, the more resistant basalt column became exposed. It is believed that the columns continue for another 60 meters below the surface.

In this post hide
1. Sawn Rocks walking track
2. Exploring the creek
3. How to get to Sawn Rocks
4. Around Sawn Rocks
5. More Nature Adventures in NSW

From the car park on Killarney Gap Road, an easy 750-meter trail takes you along an elevated boardwalk to a shaded gully above Bobbiwaa Creek. But before you start on the trail, take a moment to look around. From this spot on the top of the plateau, you have a good view of the surrounding landscape of the Nandewar Ranges.

The trail snakes its way through the white cypress pine forest which in springtime is full of wildflowers. Once you cross a small bridge, you soon emerge at a viewing platform in front of the Sawn Rocks cliff face.

As you soak in the view, look closely at the rocks and you will notice that here and there, trees managed to grab a hold and grow seemingly on solid rocks. In reality, over time, small cracks in the rocks collect soil, fallen leaves and water that allow trees to grow. In turn, the roots of the trees help to trap more debris and moisture creating more soil.

As the roots of the trees push their way through the rocks, they force apart the cracks and cause large chunks of rock to tumble down to the creek below. Over thousands, if not millions, of years, enough rocks have fallen to give the creek an appearance of a ruined ancient temple.

From the viewing platform, it is only a short walk to the rock-strewn creek. Once you cross the creek, scramble onto the boulders on your left and you find yourself inside nature’s ruined temple. From this perch, you can have a close look at a large section of columns that tumbled down from the cliff at some distant time in the past and now lies horizontally across the creek, its straight lines in stark contrast with the surrounding landscape.

You can scramble further across the boulders, past this massive pentagonal structure and explore the creek on the other side.

Depending on how much rain there’s been, the creek bed can be completely dry, and you can easily walk along its rocky bottom to check out more fallen columns scattered around the forest.

Once you are done exploring, head back to Sawn Rocks picnic area next to the car park, and if you packed your lunch, take a break and soak in the views.

How to get to Sawn Rocks

Sawn Rocks is in the northern section of Mount Kaputar National Park. To get to the rocks from Narrabri head north along the Newell Highway towards Moree for 3km. Then turn right into Killarney Gap Road. Stay on this road for about 35km, until you see the sign to Sawn Rocks on the right. There are toilets and BBQ facilities next to the car park.

The region around Sawn Rocks is a geological wonderland. There are remnants of ancient volcanos, spectacular sandstone caves, red soils, and spectacular gorges. Here are some of the most remarkable highlights.

Sandstone Caves: Tucked away in Pilliga forest, sandstone caves are some of the finest caves you’ll see in Australia. It is a series of caves carved by wind and rain in the side of a sandstone escarpment. Some of the caves are joined by passages making them two or even three-chamber structures. The caves are of high cultural significance to Gamilaroi people – ancient aboriginal carvings can be seen in some of the caves.

Sculptures in the Scrub: Also in Pilliga forest, Sculptures in the scrub is a beautiful walk along the top of Dandry Gorge decorated by five sets of sculptures. Each sculpture is a collaboration between an artist and local Aboriginal Elders that tells a story of local Aboriginal history and culture. Framed by the orange hues of Australia’s iconic red dirt, it is a very atmospheric place to explore.