The Big cat family represents some of the most magnificent animals on earth. From the enormous Siberian tigers of the Russian Far-east to the enigmatic snow leopards of the Himalayas, these cats capture our imagination with their feline grace and killer instincts. There are seven types of big cats in the world distributed across all continents apart from Australia and Antarctica.

Humans have had a turbulent history with the big cats. We feared them, deified them, hunted them and now we try to protect them. Sadly, all of the big cats are threatened with extinction, mainly through habitat loss and poaching. And without the big cats, the world will be a bleaker place.

Wildlife tourism, when done right, can be a force for good for the big cats by increasing their value and discouraging habitat destruction and poaching. When local communities benefit financially from co-existence with wildlife, they are much more likely to support conservation initiatives and adopt sustainable agricultural practices.

The seven types of big cats

So let’s have a look at the big cat family. Traditionally, the big cats were comprised of the members of the Panthera genus – lion, tiger, leopard, snow leopard, and jaguar. These are the large cats that can roar (all but the snow leopard) but can’t purr, due to the specific morphology of their throats.

But the advent of the genetic analysis techniques revealed that the two species of clouded leopards (more on them below) are so closely related to the other five cats, that they were placed into the same family. And now the big cat family is comprised of seven members, with the clouded leopards viewed as the link between the big cats and the small cats.

To roar or not to roar

All cats can either roar or purr, but none can do both. Out of 40 wild cat species, 35 are purrers and only the members of the genus Panthera can roar. All apart from the snow leopard. The ability to roar depends on the elongated and specifically adapted voice box, also known as larynx, and the shape of the tongue-bone. The lion’s voice box is the longest among big cats and its roar is consequently, the loudest. When the lion roars, the air passes through its larynx and the cartilage walls vibrate, producing the sound that can carry for 8 to 10 kilometres.

At 320 kg, the Siberian tiger is the biggest cat in the world. Sadly, the tiger is also the most endangered big cat. As recent as the first half of the last century, there were tigers living in Turkey and on the Indonesian islands of Bali and Java. These three subspecies are now extinct. The South China tiger has already crossed the point of no return with an estimated 20 individuals left in the wild. The remaining five subspecies are in various stages of decline.

We almost lost the Siberian tiger as well, but thankfully, in the last few decades, intensive conservation measures have been applied in the Russian Far-east and the king of Siberian taiga was brought back from the brink of extinction.

Today, most of the remaining tigers belong to the Bengal subspecies that occur throughout the Indian subcontinent. Not surprisingly, India is the best place in the world to see tigers in the wild.
Some of the best National Parks in India for a tiger safari are Kanha and Ranthambhore. There are a number of different safari options, from four-day trips to two weeks adventures.
If you are up for more of a challenge, head on a tour to Siberia for a week to track the Siberian tigers with local trackers at Bohai Tour.

The second largest cat in the world, the lion, once ranged across most of Africa and parts of Europe and Asia. Today the population is restricted to fragmented populations in Sub-Saharan Africa and one Critically Endangered population in India. We have already lost the Barbary lion that used to grace the wilds of Egypt, Morocco and Algeria.
Traditionally there were two types of lions: the African lion and the Asiatic lion. But the recent genetic analysis revealed that Asiatic lions belong to the same subspecies as the Northern lion which also includes the Critically Endangered West African lion and the Central African lion. The Southern African and the East African lion form the second subspecies.
You can spot the Southern and East African lions on most classical African safaris. The Northern lion is harder to track. You can try your luck in the National Parks on Western and Central Africa. The only place to see the Asiatic lion is Gir National Park in the Indian state of Rajasthan. You can either visit the park independently or on an organized tour.

The leopard caught the experts by surprise. Of all types of big cats, it has the widest distribution range, occurring from sub-Saharan Africa, through Central Asia, across the Indian subcontinent to Southeast Asia. And while some subspecies of the leopard are highly endangered, the species was considered reasonably secure. Until the experts realized that the leopards have lost 75 percent of their historic range and the population continues to decline.
The two hotspots for the leopards are parts of Africa and Sri Lanka. In Africa, you are likely to spot leopards in Kruger NP, Serengeti NP, Chobe NP, Ngorongoro Crater NP and most other National Parks in southern and Eastern Africa.
If you are heading to Sri Lanka, try to avoid Yala National Park, it has become disappointingly over-crowded, which affects animal welfare. Instead, go leopard spotting at Udawalawe National Park.
For the more adventurous types, there is an option to travel to Russian Far-east with the local Bohai tour in search of the Critically Endangered Amur leopard – the rarest type of big cats in the world. Although their numbers have been slowly rising from about 35 individuals in 1980s over 100 individuals in 2017.

The most enigmatic of the big cats, the snow leopard is often referred to as the Ghost of the Mountains. There is even a saying in Nepal that it is more difficult to see snow leopard than to see God. This elusive cat lives in one of the most inhospitable environments on earth – the high altitude moutan ranges of Central Asia, and each individual ranges over huge territories.

Because the snow leopard has a wide distribution range, it was downgraded from Endangered to Vulnerable by the IUCN  in 2017. However, the Snow Leopard Trust disputes decision this on the basis of lack of scientific data to support it. The experts estimate that there are between 3,920 and 6,390 snow leopards left in the wild.

Despite the Nepalese saying, the snow leopards are regularly seen at Hemis National Park in India. It is not an adventure for the faint-hearted though. It involves camping in -20 degrees cold and scanning the mountain valleys for hours on end looking for the elusive cat. The snow leopard’s coat of grey fur with black blotches allows it to merge so seamlessly with the environment that you could be staring right at it, yet not see it. If this sounds like your kind of adventure, book your trip with Ladakh-based Exotic Ladakh Travel.

Alternatively, you could try your luck at spotting snow leopards on the Valley of the Cats on the Tibetan Plateau. Check them out! This trip would involve a homestay with the Tibetan nomads.

The jaguar is the most water-loving big cat. It is an excellent swimmer and can often be found resting on tree branches overhanging the rivers. It also has the strongest bite in relation to body size among big cats. Its powerful jaws are capable of crushing the skull of an adult caiman – it’s favourite prey in the Pantanal.

The jaguars are unique among big cat species in that all across their 6-million sq. kilometre range, that spans 18 countries, they represent a single continuous population. There are no subspecies of jaguars. Taxonomically, it is the same cat that occurs over a very large range.

This poses unique challenges for the conservation of jaguars. Instead of protecting geographically isolated populations, the scientists now work to protect the connecting corridors of habitat that allow the jaguars to move between populations and maintain gene flow between these populations.

In late 2018, the United Nations Development Programme, initiated a jaguar conservation program Jaguar 2030, that aims to protect the jaguars across their entire geographic range.

The two strongholds for the jaguar are the Amazon and the Pantanal in Brazil. But the Pantanal is a far better place for spotting the jaguar. To see the river cats in the Pantanal, book your trip with the local Pantanal Trackers, whose founder, Julinho is the pioneer of jaguar tracking on the Cuiaba River.

The smallest of the big cat species, the clouded leopard is also the most acrobatic. It is one of the best climbers in the entire wild cat family. Its flexible ankle joints allow it to climb down trees head-first, hang off branches by their hind feet and tail and even climb on horizontal branches with their back to the ground.

Yet the climbing skills are not clouded leopard’s only talent. They are the only big cats that can purr and they have the longest canines, relative to body size, among big cats. Sometimes, they are referred to as the “modern-day sabre-tooth”.

Like all other big cats, the clouded leopard is threatened with extinction. The total population is thought to number fewer than 10,000 mature individuals, with a decreasing trend. However, due to their secretive nature, the clouded leopards have not been studied well and remain poorly understood. As in the case with the snow leopard, the population could be smaller than the current estimate.

Although the clouded leopard ranges from the Himalayan foothills all the way across Southeast Asia, it is incredibly difficult to spot in the wild. Occasionally they are spotted on wildlife safaris in India.

Until 2016, the clouded leopard was believed to be a single species. However, the use of genetic analysis techniques revealed that the clouded leopards from the islands of Borneo and Sumatra are in fact a separate species, that have diverged from their mainland cousins about 1.5 million years ago.

But over the last few years, Deramakot Forest Reserve in the Malaysian state of Sabah in Borneo has been gaining the reputation as the ‘go to’ place for spotting these elusive felines. There are of course no guarantees, but if you’d like a shot at seeing a Sunda clouded leopard, book a stay at Deramakot with Adventure Alternative Borneo.

Here is the list of big cat names for reference:

What types of big cats have you seen on your travels? Share your stories in the comments below. 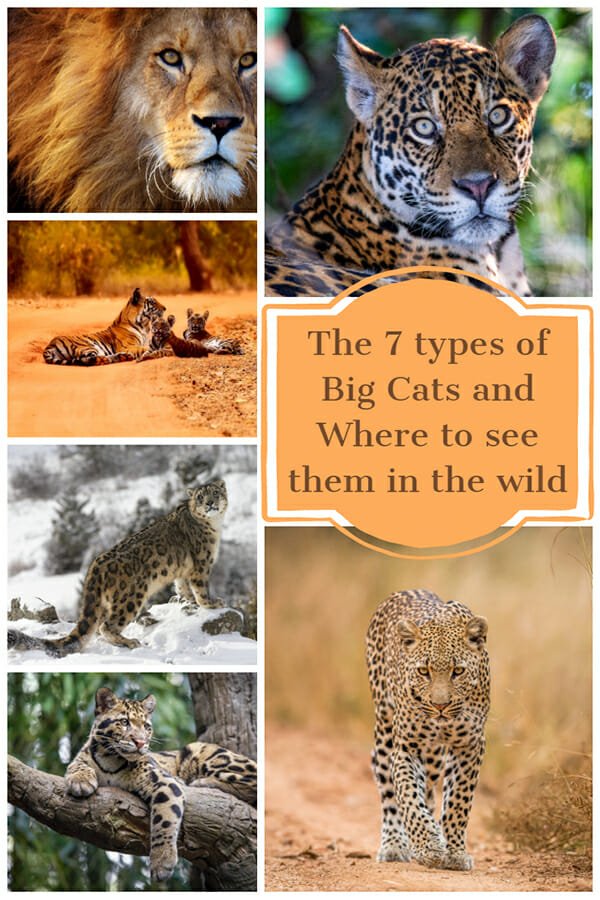 3 thoughts on “What types of Big Cats are there and where can you see them?”