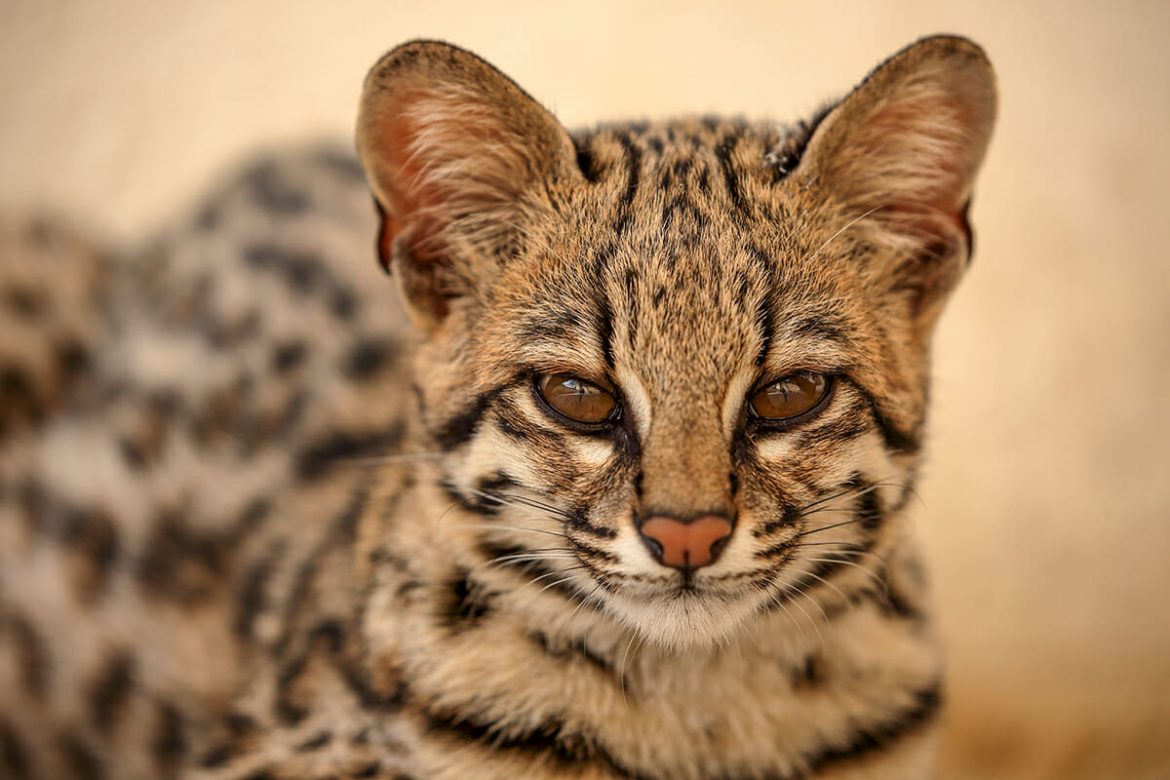 When most of us think about South American wild cats, we picture the jaguar – the large spotted predator of the Amazon jungle. But did you know that South America is home to 11 different kinds of wild cats? Most of them are small spotted cats like the ocelot and the Andean mountain cat – one of the rarest cats on Earth.

Being ambush hunters, cats rely on their ability to remain unseen which makes them very tough to see in the wild. But with a bit of patience and knowing where to go you can spot some of them in your travels in South America.

Here is a guide to all wild cats of South America and where to see them in the wild.

The only big cat in South America, the jaguar is the undisputed king of the South American jungle. It has the most powerful bite of all big cats, which it uses to crush the skulls of its prey.

The jaguar looks similar to the leopard, but it is larger and stockier, has a shorter tail, and the rosettes on its coat have spots inside them.

Threatened by poaching and habitat loss, and persecuted by the cattle ranchers in retaliation for killing domestic stock, the jaguar population is declining across its entire range. The two remaining strongholds of the species are the Amazon rainforest and the Pantanal wetlands.

The Amazon, while much more famous than the Pantanal, is not necessarily the best place for a wildlife-watching trip. The thick jungle vegetation in the Amazon conceals wildlife out of sight and you can spend a week in the jungle and not see much wildlife at all. The Pantanal, on the other hand, is a flat, open landscape – perfect for spotting wildlife.

To see the jaguars up close and personal, head to Porto Jofre on the bank of Cuiaba River in Brazil’s Northern Pantanal. There is such a high density of jaguars on the riverbanks that Porto Jofre has become the jaguar watching capital of the world.

The name ‘small cats’ refers more to the systematics (the science of relationships between different groups of animals) than to the size of the cats. The Felidae family, to which all modern-day cats belong, is divided into two subfamilies: Pantherinae that contains the seven big cats and Felinae that represents the remaining 33 cat species.

So, while some people might consider the puma as another of South American big cats, it actually belongs to the subfamily Felinae and is therefore classified as a small cat.

Puma is the most adaptable wild cat in the Americas and has the widest distribution of all South American cats. That, of course, doesn’t mean that puma is easy to spot in the wild. You are unlikely to see it during your holidays in South America unless you specifically go looking for it.

If you do, head to Torres del Pane National Park. This 900-square-mile park in southern Chile is home to about 50 pumas. Most people visit Torres del Pain to hike its spectacular wilderness in the warmer months but to track pumas, you will have to brave the winter cold.

From June to September pumas come down to lower altitudes following guanacos that move down from the mountains in search of food not covered by snow. There are a number of wildlife tour companies that offer puma-tracking adventures with a very high success rate.

Pumas are also occasionally seen in the southern Pantanal in Brazil, around the eco-lodges between the cities of Campo Grande and Caramba.

READ MORE: 35 Amazing Brazilian Animals you Can Spot on your Travels

The jaguarundi is the most unusual of South American wild cats. With its long slender body, long tail and short legs, it is similar in appearance to a weasel. Its fur is uniform in colour either grey, black or chestnut.

Jaguarundis are uncommon in zoos, don’t often feature in nature documentaries, and most people are not aware of their existence. So spotting one in the wild is a special treat.

Unusually for cats, the jaguarundi is diurnal, meaning that they are more active during the day than in the evenings and at night. They are good climbers but prefer to hunt on the ground, preying on anything they can catch.

Yet despite their diurnal habits, jaguarundis are notoriously difficult to see in the wild. Most sightings are accidental, although you need to be in the right places for such accidents. Emas National Park in Brazil is one of the more reliable places to try your luck. Check the map below for more suggested sites.

There are 8 small spotted cats living in South America, all belong to the same lineage – Ocelot, or Leopardus in Latin. Curiously, the South American cats of Leopardus lineage have 36 chromosomes instead of the usual 38, as in all other wild cats.

The largest of South America’s small spotted cats, the ocelot is an exquisitely beautiful creature. Its luxurious coat mirrors that of the jaguar but with spots and stripes instead of rosettes, and its face is much more delicately feline.

While mostly solitary, the ocelots are a little more social than other cats. And they do most of their socializing in the toilet. That’s right, ocelots use communal latrines that serve as a kind of ‘visitor registry’. The droppings in these latrines contain information on who lives in the area and whether they are open to romance.

Ocelots are reasonably common in parts of South America, but still not easy to find. Unless you visit Fazenda San Francisco in Brazil’s Southern Pantanal. The extensive rice paddies at the fazenda support a booming population of rodents that attracts ocelots from the surrounding savanna.

Northern Pantanal is also a good place to look for ocelots, as well as a few more spots on the map at the end of the post.

The margay can be easily confused with the ocelot, though it’s only half the ocelot’s size, has a longer tail and larger eyes. Margay’s eyes seem to take up half of its face.

Margay is one of the most acrobatic members of the feline family. It is one of the only three cats in the world that are capable of descending from trees head-first (the others are the Clouded leopard and the Marbled cat in Asia).

They owe that talent to the flexible joints that allow their ankles to turn 180 degrees. They are able to grasp branches equally well with their fore and hind paws and can jump up to 3.7 meters horizontally. They can hang off branches by a single back paw and even give birth in the trees.

The margay’s other talent is mimicking the call of its prey. They have been observed ‘faking’ the calls of pied tamarin monkeys to lure the primates closer before pouncing on them.

Spotting the little acrobat in the wild is no easy feat. If you do, it will be mostly down to luck. But you can improve your chances by spending a few days in an area where the sightings are somewhat regular, like the Wildsumaco Lodge in Ecuador.

Much smaller than the ocelot, the Oncilla is the second smallest cat in South America after the guiña. Like its larger cousin, it prefers to hunt on the ground, catching small mammals, birds and reptiles.

Generally, it is a timid and elusive cat that flees at the slightest disturbance. It is known for sitting motionless for long periods of time, concealed within ground vegetation or behind the tree foliage.

Until 2013 the experts believed the oncilla to be a single species. But recent genetic studies have revealed that oncillas from the northern part of their range do not interbreed with their southern conspecifics. In view of these findings, the oncilla was split into two species: the Northern Oncilla and the Southern Oncilla. Their ranges overlap in Central Brazil but the two oncillas are almost impossible to tell apart.

The Bellavista Lodge in Ecuador is a good place to try spotting an oncilla in the wild. And you can combine a stay at Bellavista with a trip to the Galapagos for a spectacular wildlife holiday.

About the size of a domestic cat, Geoffroy’s cat is the most widespread and abundant small spotted cat in South America. Although, it’s not always spotted, as black individuals are quite common, especially in the Parana River delta in Argentina.

It is a good climber and a strong swimmer, but its most unusual talent is the ability to stand up on its hind legs, using its tail for support. A handy trick for scanning the landscape for potential prey.

Geoffroy’s cats are not fussy eaters and will consume whatever prey is most abundant, which is usually rodents and hares. However, in Argentina’s El Palmar National Park, doves constitute a large proportion of their diet.

Named after the French zoologist Étienne Geoffroy Saint-Hilaire, Geoffroy’s cat is a tough animal that feels equally at home on Bolivia’s windswept high altitude Altiplano and in some of the hottest climates in South America.

But the best place to see it in the wild is El Palmar National Park in Argentina.

The tiny guiña, also known as kodkod has the smallest distribution of all South American wild cats, occurring only in central and southern Chile and adjoining areas in Argentina. It is the smallest wild cat in South America, growing to all of 2.4kg.

The guiña is a terrestrial hunter preying on small mammals, reptiles and bird eggs. When the going gets tough it can subsist on a diet of moths.

Tiny as they are, guiñas are tricky to spot in the wild. Chiloe island in Chile seems to be a good place to try. The Far South Expeditions, authors of the images below, offer four-day tours to the island to search for rare mammals.

With less than 2,500 individuals remaining in the wild, the Andean mountain cat is one of the most endangered wild cats on earth.

It lives at high elevations in the Andean mountains in Argentina, Chile, Bolivia and Peru where it preys primarily on the mountain viscachas.

With its thick coat and exceptionally long and fluffy tail, the Andean mountain cat looks like a mini snow leopard, but it is even more elusive. Even the scientists studying them almost never get to see them in the wild, relying instead on camera trap captures to study the cat’s habits.

The Far South Expeditions are trialling trips to Lauca National Park in Chile to search for the Andean cats, so watch this space for future developments. In the meantime, here is an image of a male Andean mountain cat that was released into the wild by the Andean Cat Alliance team (Alianza Gato Andino), after it wandered into a town.

Closely related to the Andean mountain cat, the Colocolo is also known as the Pampas cat or Pantanal cat.

The colocolo has the most varied coat colour of all South American cats. There are six main variations, but all have two dark lines on each cheek and a pink nose. Broadly, the different colour variants are reddish or dark brown with rusty-coloured stripes and greyish with distinct dark brown stripes on the legs and spots on the underparts.

Surprisingly little is known about Colocolo’s ecology. There is even no consensus on whether the species is nocturnal or diurnal in its habits. At Fazenda San Francisco in Brazil’s southern Pantanal, they are seen about once a week on night drives.

One of the best sources of information about South American wild cats is Javier Pereira’s and Gustavo Aprile’s book “Felinos de Sudamerica“. Unfortunately, the book is not available in English, but here is a map of wild cat sites in South America.