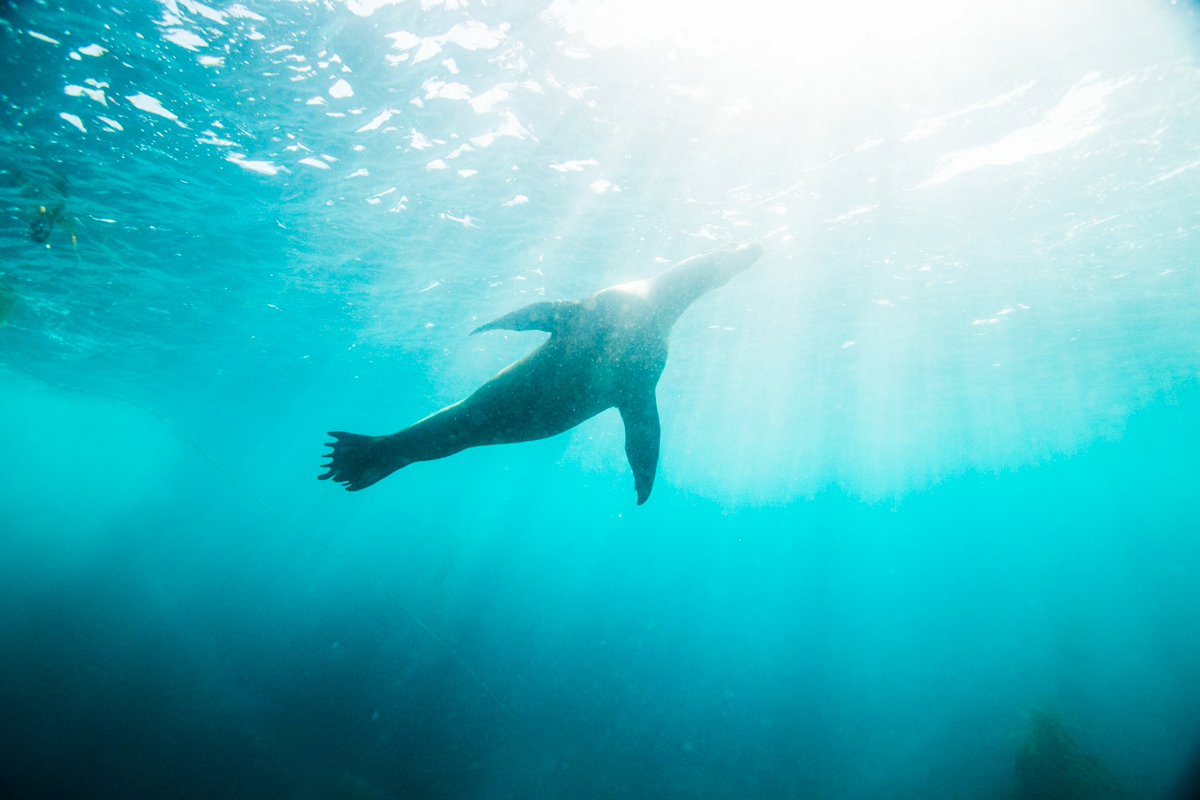 Sitting on the side of the boat, tightly zipped into a wetsuit, I am terrified of making the next move and plunging into the ocean. I’m a useless swimmer and the skipper’s promise that the buoyant wetsuit won’t let me drown is forgotten as soon as I hear that the bottom is about 8 meters away. I’ve been waiting for months to come swimming with seals in Narooma, and now that I’m here, I am borderline paralyzed with fear. But the seals are splashing in the water just a few meters away and I desperately want to meet them. So I take a deep breath, shimmy off the pontoon and slide into the water.

My terror is immediately replaced with surprise that I haven’t gone down like a rock. And then surprise gives way to awe as I put my snorkel-clad head down and discover a whole new world below me. The water is so clear that I can see every rock and every fish on the sandy bottom which does seem to be a long way away. An unexpected benefit of my emotional rollercoaster is that I barely register how my wetsuit fills with bitingly cold water – away from the coast the water is always colder.

We are just a few meters offshore from Montague island – the second biggest island off NSW coast (after Lord Howe Island), about 9 km from Narooma. And the reason we are here is rolling in the water just ahead of me – the fur seals. Seals are everywhere where there is water in Narooma, but the largest colony is found on Montague Island. These are mostly male seals that congregate here outside of the breeding season.

Do you know what a group of seals is called? Well, there are actually quite a few names: a colony, a harem, a spring, a rookery, and my absolute favourite – a plump of seals. Check out this guide for more quirky names for groups of animals.

Most of these bachelors are the Australian fur seals. They are highly social animals and like to huddle together. It’s not uncommon to see them sitting on top of each other even when there is plenty of room to spread out. There are also a few New Zealand fur seals around. These guys like their personal space and prefer to rest in solitude. The seals on the rocks in Shelly Bay, where our boat is anchored are clearly the social kind. They rest and swim in tight groups.

Once my mind accepts the fact that I am really not going to sink, I lift my head out of the water, find a seal rolling around just below the surface and swim to meet it. Below me, the underwater landscape alternates between deep valleys with a sandy bottom and high rugged cliffs that rise almost to the surface. The tops of the cliffs are covered in thick bushes of unexpectedly colourful seaweed that hide all kinds of fishes.

The swells are quite strong, especially close to the rocks and I seem to have fairly little control over where and how fast I am going. Suddenly a seal appears out of the murk and the swells are carrying me right towards it. I desperately hope that my uncontrolled approach is not making me look threatening. As if I needed an extra challenge, I notice that I am carried towards a particularly tall underwater cliff.

While I am trying to maneuver around the underwater Everest, the seal swims right past me, rolling and somersaulting in the water as it passes me. The grace of the seal makes me feel like a complete clutz in comparison. It turns around and looks at me again as if inviting me to join. But after a minute of thought, it kicks its flippers and disappears in a whirl of bubbles.

This pattern continues for about an hour. I swim around gawking at all the unusual life underwater and seals appear zipping, twirling, or torpedoing past me, sometimes close enough to touch. They look at me with their huge eyes full of puppy-like curiosity and then disappear in the distance. Their grace and agility in the water defy belief. They seem to be able to rapidly change their speed and direction without any visible movements. In the end, my experience of swimming with seals in Narooma was completely managed by the seals.

One huge seal has been spending that entire hour twirling on the surface with its flippers flicked above water in ultimate relaxation. I come as close as I dare, not wanting the swells to send me on a collision course, but the seal is utterly unconcerned with my presence and continues its effortless floating meditation.

By the end of the hour I finally notice just how cold I actually am. With a final look at the meditating seal, I turn around and swim towards the boat. Most of our team are already onboard. I find a sunny spot on the deck and try to warm up. If I knew anything about snorkeling offshore, I would’ve known to bring a towel to wrap myself in for the boat ride back. As it is, I have quite a bit of shivering to do.

We spend about half an hour cruising around Montague Island. The geology of the island divides it roughly into two parts: a basalt northern half, and a rounded, granite southern part, with the narrowest section – the Gut in the middle. The northern half is home to the seals and the southern half is dominated by the thousands of nesting birds and a historic lighthouse.

And the whole island is washed over by the crystal clear and vibrantly blue water characteristic of this section of the coast. It is so beautiful around that I forget that I am cold until the skipper revs the engine and we shoot towards Narooma, jumping on the waves as if on an aquatic roller coaster.

How to get to Montague Island

How to snorkel with seals in Narooma

Swimming with seals at Mongague Island is a must-do adventure in Narooma (you might also like my guide to other things to do in Narooma). We took the Mid Morning Snorkelling with Seals Adventure with Montague Island Tours with Wazza for $110 per person.

The tour started at 11 am at Narooma public wharf. There were about 15 of us in the group and it took us roughly an hour to get into the wetsuits that were provided to us. We left the wharf by 12 pm and by 12.30 pm Wazza anchored the boat in Shelly Bay at Montague Island.

We swam with seals for about an hour and then spent about half an hour cruising around the island. Another 20-minute ride back to Narooma and we were back by 2.30 pm. Getting out of the wetsuits after the tour was a slightly quicker exercise and we were done and ready to go by 3 pm.

A tip: pre-book a GoPro when you place your booking online. They go like hotcakes and we watched almost in tears as someone picked up the last one just ahead of us.