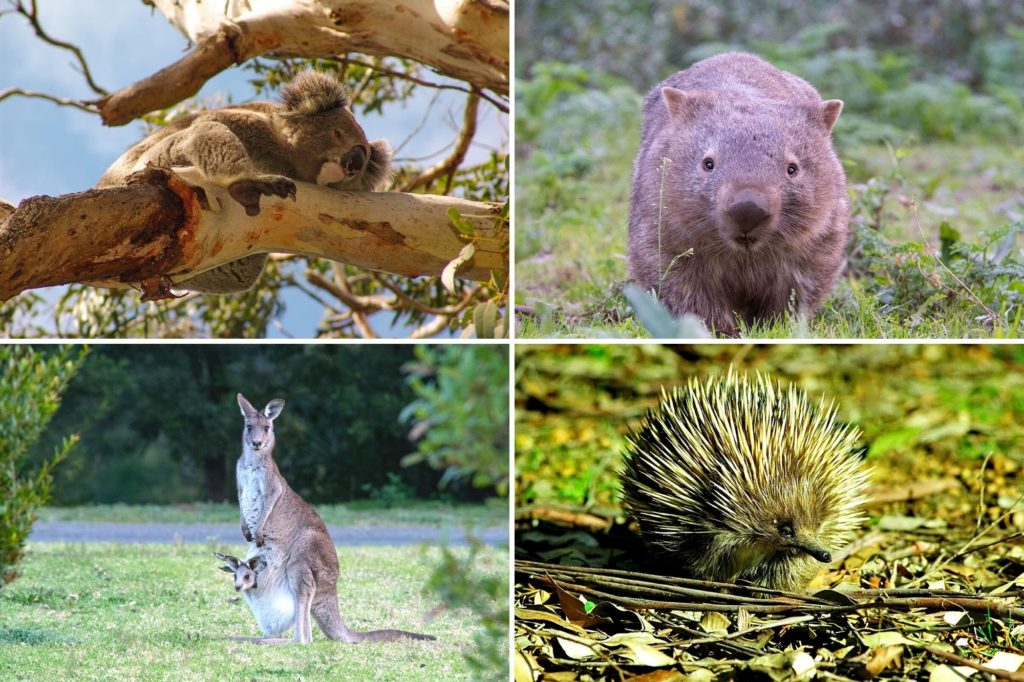 Australia is famous for our unique wildlife and while the cities are not typically considered as wildlife-watching destinations, with a bit of luck and effort you can see some of Australia’s most iconic animals in and Sydney.

Sydney – Australia’s largest city managed to retain a fraction of its former biodiversity throughout centuries of development. Birds can be easily seen in the city parks and leafy suburbs while finding mammals in Sydney requires some time, patience and knowing where to look.

Most places mentioned below can be explored independently, but if you would like to join an organized tour to mazimize your wildlife spotting opportunities or to see the marine wildlife, here are some of the best wildlife tours from Sydney.

What animals live in Sydney Australia?

There are both native and introduced mammals living in Sydney. The most common natives are possums, gliders, kangaroos and wallabies. With a little bit of effort, you can also find echidnas, bandicoots, koalas, wombats and bats. The introduced rabbits are a common sight in the city parks and foxes can often be spotted in the suburbs.

So, if you are ready for a wildlife-spotting adventure, here is the list of some common species of native wildlife in Sydney and the best spots to see them.

Starting with one of Australia’s most loved marsupial, the koala. Are there koalas in Sydney? Yes. They are not the easiest animals to find, and certainly not too close to the city centre, but with a bit of determination, you can see koalas in Sydney.

About 300 koalas live in the Macarthur bushland in western Sydney. It is the largest population in Sydney and, more importantly it is one of the few chlamydia-free koala populations.

The best place to look for them is a small patch of bushland near Campbelltown train station, called Smiths Creek Reserve. For the best chance of spotting a koala, walk slowly through the reserve and scan the canopies of eucalypt trees as you walk along.

The closest relative of the koala, the Wombat is a stocky, short-legged marsupial that lives in interconnected burrows that it digs with the help of its long claws. To accommodate the digging lifestyle, wombats developed an interesting adaptation – their pouches face backwards, like in Tasmanian devils.

Wombats are harder to spot around Sydney than most other animals on this list, but you can usually see signs of their presence: square droppings, usually placed on top of rocks and giant entry holes to their burrows. The animals themselves are occasionally spotted in Kur-rin-gai Chase National Park and in the Blue Mountains.

But the best place to see wombats near Sydney is the beautiful Kangaroo Valley. Visit Bendeela campground in the late afternoon and watch dozens of wombats emerge from their burrows to graze on grasses, herbs and leaves on the grassy clearing of the campground. You can also take this amazing day tour from Sydney to Kangaroo Valley and spend an afternoon walking among wombats and Eastern grey kangaroos.

The Eastern grey kangaroo can often be found at golf courses, particularly on the North Shore. But the best places to see the wild kangaroo are Mt Annan Botanic Gardens in Western Sydney and the Euroka Campground in the Blue Mountains.

Alternatively, you could take a tour to the Southern Highlands with Perfect Day Sydney that takes you Kangaroo Valley to see wombats and kangaroos.

Wallabies are very similar to the Kangaroo, but smaller in size. The most common wallaby in Sydney is the Swamp wallaby. It is mostly grey in colour with a darker back and light orange chest.

It prefers dense forest habitat but can often be found in the open areas. They are regularly seen in the Blue Mountains and the Royal National Park. A particularly good spot for these animals in Sydney is The Basin campground in Kur-ring-gai National park.

Although, you can find them much closer to the city – in Mt Annan Botanic Gardens in western Sydney. There are occasional nocturnal walks conducted by the gardens, that will give you a good chance to spot some of Sydney’s nocturnal mammals.

Another common wallaby in the Sydney region is the Red-necked wallaby. Its name comes from the reddish fur on their shoulders and neck. Good places to spot this species are Wollemi National Park and the Watagans Mountains.

There is also a population of the locally endangered  Brush-tailed rock-wallabies living on the steep cliffs in the Watagan Mountains in the northern part of the park at Heaton Gap.

The Short-beaked Echidna is covered in fur and spines, much like a porcupine, though it is a very different animal.

The echidna is one of Australia’s two orders of monotremes – mammals that lay eggs instead of giving birth to live young. They are considered to be the oldest evolutionary branch of mammals.

While the echidnas are not among the common Sydney animals, they can be found in the national parks on the fringes of the city. Blue Mountains and Royal National Park are good places to look for them in the warmer months

Another monotreme, the Platypus is so odd-looking that British zoologists believed it to be a hoax when the first specimens were brought back from Australia. It is a venomous mammal that looks like a combination of a beaver, an otter and a duck, lays eggs, and can detect electrical impulses emitted by its prey.

Spotting a Platypus in the wild will take a lot of luck, it is one of the most elusive Sydney animals. The best place to look for Platypus in Sydney is the Blue Lake near the entrance to the Jenolan Caves in the Blue Mountains. The lake is a beautiful spot to visit in its own right. It owes its unusual colour to calcite flowing in from the limestone caves. Sit quietly by the lake at dawn or dusk and watch the water for the ripples. If you are lucky, you will spot the oddest  Australian native animals emerging on the surface.

You could easily combine the trip to Jenolan Caves with a visit to Euroka clearing to see the resident mob of Eastery Grey Kangaroos.

The most common mammal in Sydney, the Brushtail possum is the second-largest possum in Australia, about the size of a domestic cat. It is nocturnal and arboreal and exceptionally well adapted to the urban environment.

The Brushtail possum gets a bad rap for nesting in the roofs of people’s homes and creating an excessive amount of noise at night. The problem animals are often trapped and relocated to the local parks.

One of the best places to look for the Brushtail possum in Sydney is Hyde Park in the city centre.

Ringtail possum is another common native Australian marsupial that can be spotted in Sydney. Smaller than its Brushtail cousin, the Ringtail possum also feeds on leaves, flowers and fruit of native and introduced trees.

This species is known for building large ball-shaped nests, called drey. Each possum will build more than one drey within its home range. If one nest gets destroyed the possum moves to a different one.

The Ringtail possum is common in suburbia, but the best place within the city to look for it after dark is the Centennial Park.

On the opposite end of the size scale, the adorable Eastern pygmy possum, one of cutest Sydney animals, is all of 7 centimetres long. It feeds mainly on nectar but will also consume fruit and insects. It is an excellent climber and moves quickly and erratically while feeding on Banksia bushes.

The tiny possum hibernates during winter and emerges in spring when the flowers are plentiful. A good place to spot the pygmy possum is the Royal National Park. Look for them on the flowering bushes after sunset.

Another adorable mammal that can be found in the Royal National Park after dark is the Sugar Glider. It is a small possum with an extensive gliding membrane between its forelegs and its hind legs. This membrane allows the animal to glide up to 50 meters in a single leap.

The Sugar glider feeds on the sap of eucalypt trees, by biting through the bark of the trees. This makes the gliders quite easy to spot while they are busy tapping the sap.

The best way to see the gliders is by joining a spotlighting walk organized by the Sutherland Shire Bushcare group.

The Greater glider is another gliding marsupial that can be spotted in the National Parks around Sydney. It is much larger than the Sugar glider and has two distinct colour morphs: dark brown and light grey.

It feeds almost exclusively on leaves and buds of eucalypt trees and therefore requires eucalypt woodland to survive.

The good places to look for the Greater glider is the Watagans National Park near Morisset, about 1 hr drive north of Sydney.  They also used to be quite common in Royal National Park south of the city, but the population never recovered after the severe bush fires in 2001.

Most of the other terrestrial mammals in Sydney are trickier to spot. There is a population of the locally endangered Long-nosed bandicoots on the North Head, in Sydney Harbor National Park. The North Head Sanctuary is managed by the Australian Wildlife Conservancy (AWC) to protect this isolated population.

You can spot them after the sunset near the small settlement on the North Head Scenic Drive, opposite Collins beach road. Don’t forget to reduce your speed when driving on the North Head and keep an eye out for the bandicoots on the road.

A few years ago, Bush rats (Rattus fuscipes) were re-introduced on the North Head by the AWC. It is a native Australian rodent, that can be distinguished from a feral Black rat by having a much shorter tail.

The scientists hope that once the native Bush rats establish in the sanctuary they would out-compete their feral black cousins.

In Sydney, a permanent camp existed at the Royal Botanic gardens, until the gardens initiated a controversial policy to remove the bats in order to preserve the trees that the bats were slowly decimating.

The flying foxes can still be seen in many parks in Sydney, and there is a large colony in Lachlan Swamp in Centennial Park.

Centennial Park is also a good place to spot the microbats. In contrast to the large flying foxes, the microbats are tiny creatures, with a wingspan the size of your hand.

Some microbats roost in caves, others in tree hollows, and a few species roost in man-made structures.

The most common microbat in the urban areas of Sydney is the Gould’s wattled bat. Other species recorded in the Centennial park are the Southern myotis, Common bent-wing bat and the east coast free-tailed bat.

Luckily for Sydneysiders, our city is located on one of the world’s most beautiful harbours and that introduces an entirely new dimension to watching wildlife in Sydney – whales and other marine mammals.

More than 33,000 of Humpback whales cruise past Sydney between May and October on their epic migration between Antarctica and the Great Barrier Reef. You can watch humpbacks from the shore or take a whale-watching cruise and see them on their terms. Here is everything you know about experiencing the Humpback migration in Sydney.

You can also take a Pelagic nature tour that would take you out into the open ocean where you have a chance of spotting different species of whales as well as a wide variety of sea birds, including the magnificent Wandering Albatros. Read about my experience on pelagic tours here.

Have you spotted any native Australian animals in Sydney? I’d love to read about your sightings in the comments.

21 thoughts on “Where can you see wild Australian animals in Sydney?”