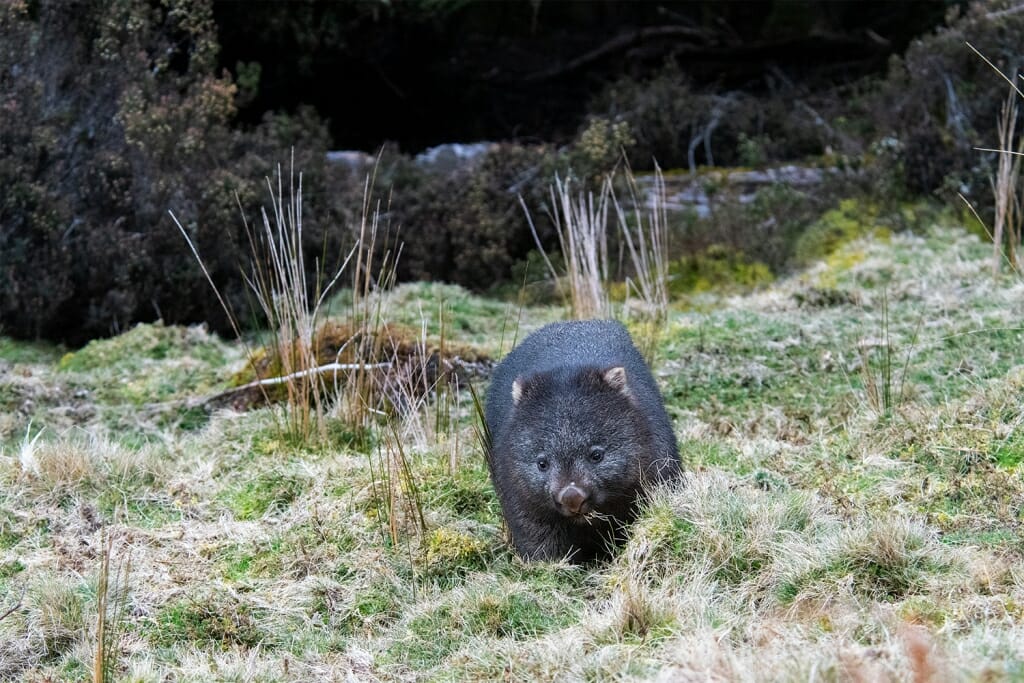 The Cradle Mountain-Lake St. Clair National Park is the most iconic natural attraction in Tasmania – Australia’s island state. It is also one of the best places for spotting Tasmania’s wildlife. In fact, the stunning alpine wilderness is so high on everyone’s bucket list that its popularity is becoming too much of a good thing.

The numbers game – is wildlife tourism good for wildlife?

More than 250,000 people visited the park in 2017, prompting the Tasmanian Parks and Wildlife Service to restrict vehicle access to Dove Lake – one of the most popular scenic sights in the park, in order to reduce the environmental impacts of tourism on the fragile ecosystem.

The issue of growing tourism in Tasmania has the state divided, with some advocating for instituting a cap on visitor access to the more popular sites, while others welcome the growth and the revenue it injects into the state’s economy. At the very least, the visitors should be educated about responsible travel and the leave no trace principles when visiting the Tasmanian wilderness.

This debate fitted perfectly with the theme of the Wildlife Tourism Australia conference that gathered 43 experts from six countries (Australia, New Zealand, United States, Germany and Sri Lanka) at the Cradle Mountain Hotel. I attended the conference as a wildlife and travel writer and spent three days discussing a wide range of issues facing the wildlife tourism industry with other conference delegates.

One of the most urgent issues in wildlife tourism in Tasmania is also the most obvious one. Driving from Launceston airport to the conference venue, the delegates were confronted with a disturbingly high amount of roadkill on the Tasmanian roads. The numbers are devastating. Nearly 500,000 native animals die from collisions with vehicles in Tasmania every year. That is 57 animals per hour.

Thankfully, the research led by Dr. Anne Hardy at the University of Tasmania offers a ray of hope for Tasmanian wildlife. The data collected for the Tourism Tracer project offers unique insights into where visitors go on the island, how they move around, and what influences their decisions. This information can be used to craft visitor education strategies to encourage drivers to reduce speed and to avoid driving around dawn and dusk when wildlife is the most active.

One of the main reasons Cradle Mountain was chosen as the conference venue, apart from its scenic beauty, was the abundance of wildlife that can be seen in the surrounding forests and grasslands. I took every opportunity to explore the age-old forest and spot some Tasmania wildlife.

On our first afternoon at Cradle Mountain, I teamed up with a colleague for a hike around Dove lake. Cradle Mountain is the starting point of Tasmania’s famous Overland Track, but we, of course, were not prepared for a multiday adventure. So a short walk around Dove Lake was the best we could do. It was quite late in the day; the shuttle to the lake stopped running and we were able to take our own car into the National Park. The sun was low in the sky and its warm golden light bathed Tasmanian ancient wilderness. A kangaroo came bounding across a grassy patch. A group of Tasmanian Pademelons was browsing among some short bushes. Also known as a Rufous-bellied pademelon, these small marsupials used to occur throughout south-eastern Australia. Now they survive only in Tasmania. They are Tasmania’s only pademelon species.

The Dove Lake loop trail was virtually empty, just us, the lake and the imposing Cradle Mountain. The trail is 5.7 kilometres long and takes about 2 hours to complete. It takes you through undulating patches of buttongrass, past sandy lake beaches, and into dense rainforest. At the end of the trail, we came across a relaxed wombat browsing in a patch of buttongrass. Tasmanian wombats seem to be much darker than their mainland counterparts.

Back at the hotel grounds, we spotted a Brushtail possum making its way along the gnarled branches of a moss-covered tree. It appeared much larger than the mainland brushies, about the size of a large cat. While it is the same species that live in the urban parks all around Sydney, Tasmanian Brushtail possum is actually an endemic subspecies restricted to the island.

The following morning, I woke up at dawn and went to explore the forest around the Cradle Mountain hotel. There were lots of Bennett’s or Red-necked wallabies feeding on grass shoots in the early morning light and a few Tasmanian pademelons lurking in the shadows.

A pair of Green rosellas flew in and added some vibrant colour to the landscape. Green rosellas are the only parrots that spend their entire lives in Tasmania. All other parrots that occur in Tasmania only come to the island to breed and return to the mainland outside of the breeding season. So if there was one bird I particularly wanted to see in Tassie, it was the Green rosella, since it doesn’t occur anywhere else.

Since I only had a few days at Cradle Mountain, I tried to use all the breaks between the conference events to walk in the forest surrounding the hotel in search of more wildlife. Ironically, my next sighting happened right outside of our conference venue – a Short-beaked echidna came to look for its next meal in the small native garden patch at the front of the building. Needless to say, most of the conference delegates decided to forgo their morning tea for the chance of spending a few minutes watching one of Australia’s most unique mammals – one of the only two monotreme species on the continent (the other, of course, is a platypus)

While I had some luck spotting a range of Tasmania wildlife species, some species are much harder to spot in the wild than others. Tasmania’s most iconic mammal and the world’s largest carnivorous marsupial – the Tasmanian devil, is fighting for survival against the contagious facial tumour disease that is decimating the wild populations across most of Tasmania.

To see wildlife conservation in action, the conference delegates visited [email protected] sanctuary located near the Cradle Mountain Visitor Centre. Part of the Tasmanian government’s Save the Devil program, the sanctuary houses 60 Tasmanian devils as well as a number of Spotted and Eastern quolls.

“The balance between conservation and tourism is a challenge we face every day,” said the sanctuary CEO and the former park ranger, Wade Anthony.

While providing educational experiences for over 28,000 visitors a year, the sanctuary is also involved in programs to release captive-bred animals into the wild. All Tasmanian devils at the sanctuary are part of the insurance population, and the animals earmarked for future releases are housed in off-display enclosures to minimize contact with humans.

The biggest threat that the released Devils face in the wild is being hit by cars, and with the growing visitor numbers, the issue of wildlife deaths on the roads is becoming even more pressing.

Looking for possible solutions, Ronda Green, the Chair of Wildlife Tourism Australia, suggested that a percentage of the growing tourism revenue could be used to fund the construction of wildlife overpasses and protective fencing in wildlife hotspots to deter animals from approaching the roads.

And with appropriate visitor education, the pressure on the ecosystems can also be reduced. After all, a group of 5 disrespectful visitors can be more harmful than a well-behaved group of 30.