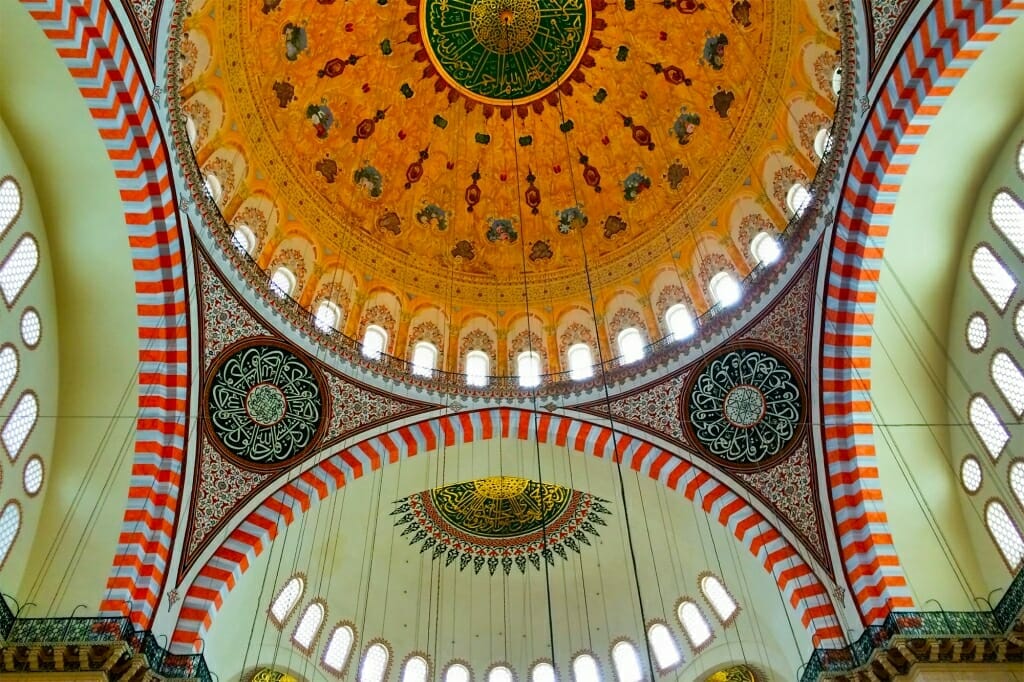 One of the most fascinating periods of life in Istanbul is the Ottoman Golden Century – the age of Sultan Suleiman. And perhaps the most interesting character in the Ottoman history was Sultan Suleiman (1520 – 1566) himself.   A true leader, he personally led his army on numerous military conquests, took a hands-on approach to all matters of state, established a new law system, and promoted the development of arts and culture in the Empire.

Suleiman was also a romantic soul, which he proved by breaking with Ottoman tradition to marry his Russian concubine Roxelana. The flip side of his emotional nature, however, saw him executing people who were the closest to him, including his son Mustafa.

Part of Suleiman’s genius lied in his ability to discern an individual’s talents and abilities and apply them to the greatest benefit of the empire. For example, he appointed a military engineer Mimar Sinan as the royal architect, who then went on to create some of Istanbul’s most recognizable buildings.

It seemed like a good idea to spend a day exploring the buildings designed by Sinan in Istanbul. A day of exploring the mosques is also one of the best things to do in Istanbul in winter – it gets you out of the chilly breeze blowing from the Bosphorus.

The most celebrated of buildings designed by Sinan in Istanbul is the Suleimaniye mosque. Sprawled out on the top of one of Istanbul’s seven hills this mosque dominates the city’s skyline when viewed from the Golden Horn and its minarets can be seen from many far-flung corners of the city.

It is built in the traditional ‘Sinan style’, combining Islamic and Byzantine architectural elements. The large dome is supported by semi-domes mirroring the style of Aya Sophia, while pencil-sharp minarets land the structure a distinctly Islamic look.

Like all other imperial mosques in Istanbul, Suleimaniye was designed as a complex of buildings, including a hospital, a school, a hammam, a Qur’an school and a public kitchen to feed the poor.  Though the most interesting addition to the mosque is the two mausoleums that house the tombs of Sultan Suleiman, his wife Hurrem Sultan (Roxelana) and their daughter Mihrimah Sultan.

After months of watching the Magnificent Century, the Turkish TV series about the reign of Suleiman, seeing the tombs of these people, made it so real that I was on the verge of tears. I even invested in a selfie stick to take a snap of myself at Suleiman’s mosque.

It stands to reason, that since the Suleimaniye Mosque is visible from most parts of the city, it would have fantastic views of the city itself. Especially looking towards the Golden Horn. And the view really is spectacular. Fringed by the little domes of one of the mosque’s structures it sweeps past the Galata Tower and the Golden Horn stretching out as far as the Bosphorus Bridge.

Not far from Suleimaniye mosque there is another Sinan’s mosque with a much sadder history. The Sehzade mosque, also commissioned by Sultan Suleiman was built to commemorate the death of his beloved son Mehmed.

Sehzade Mehmed is believed to have died from smallpox at the age of 22 and according to popular tradition, Suleiman spent three days grieving next to his son’s body, not allowing him to be buried.

Next, to Sehzade mosque there are a couple of tiny ‘commoners’ mosques that look like toy buildings in the shadow of the great structure, all the more so due to their colored exteriors, one pink and one green. Same God, different budgets.

It wasn’t just the sultans who could immortalize their names in stone and mortar. One of Istanbul’s most adorable mosques is Rustem Pasha mosque near the spice market in Eminönü. One of the most quaint buildings designed by Sinan in Istanbul, this mosque is famous for the intricate patterns of Iznik tiles that cover its interior.

Who was Rustem Pasha?

Rustem Pasha was quite an interesting character. Born in Croatia, he was taken as a child to Istanbul where he worked his way up through the ranks until he entered Suleiman’s household as a chief supervisor of the sultan’s stables.

There he acquired the trust of Hurrem Sultan and went on to become her most trusted co-conspirator in the various schemes that Roxelana was so well known for. In the process, he had the audacity to fall in love with Mihrimah – the only daughter of Suleiman and Roxelana.

Miraculously he was allowed to marry Mihrimah Sultan and was given the title of the Grand Vizir of the Empire.

Visiting this mosque is also quite an interesting experience. Or maybe it was just me.

I tried to enter through what looked like a gate to the front yard, but it was full of workers hosing down the pavement. One of the cleaners confirmed my suspicions by shaking his head and suggesting that I go in through the window next door.

I thought he confused the word ‘window’ with some other form of entrance, but no…. There was, in fact, a window cut in the stone wall next door and, while it was quite low to the ground, I did have to pretty much fold in half to squeeze through it.

Amazingly on the other side, the window opened onto a stairwell that brought me to the front yard of the mosque. They really should make this the main form of entrance. It felt very ‘middle ages’ climbing into a stone fortress through a small window.

The interior of the mosque is very pretty. Being smaller than the sultans’ mosques, it feels more intimate, more down to earth. And it is almost entirely blue. The appeal of Rustem Pasha mosque comes from its very low-key atmosphere. You don’t feel as much of an outsider as you do in the big mosques. It’s a good place to wander around, to explore different nooks and crannies and to feel the spirituality of Islam.

Back at Sultanahmet, there is one more of Sinan’s creations – Hammam of Hurem Sultan. Constructed as a charity building on the site of the Byzantine Baths of Zeuxippus it currently functions as a high-end hammam on offer to tourists.

Sultanahmet is also the site of my favourite imperial mosque in Istanbul, which surprisingly was not built by Sinan, but by his student Sedefkar Mehmed Aga.

The best spot to view and photograph the Blue mosque from is the rooftop terrace of the Seven Hills Hotel conveniently located between the Blue Mosque and Hagia Sophia.

What are your favourite mosques or other Ottoman structures in Istanbul? Share your thoughts in the comments below.

6 thoughts on “The Greatest Mosques of Istanbul”