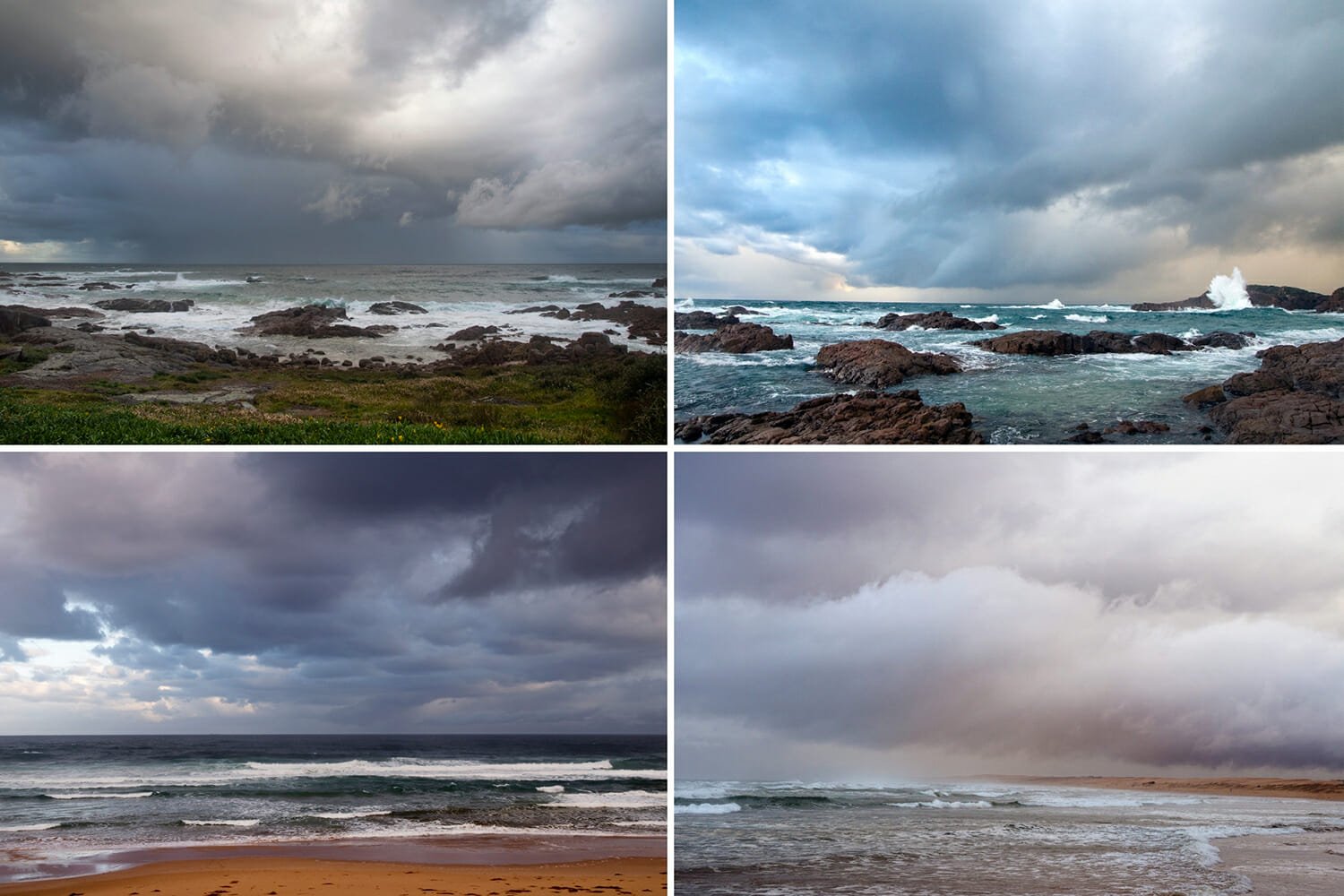 Anna Bay is a quiet seaside town in Port Stephens. Well, quiet for most of the year. It lies in the sweet spot between the rugged coastline of Tomaree National Park and the endless expanse of Stockton Beach. Somehow, it managed to avoid the onslaught of overzealous development that transformed most of the other towns in the bay and kept its charm of a backwater beachside community. I probably wouldn’t have even known about Ana Bay, if I didn’t have a friend who’s been rocking a ‘writers retreat’ lifestyle in town for the past few years.

Marvel at the night sky

In Anna Bay, you still can walk along the coastal cliffs for hours and not meet another person. You can walk to the end of the street at night and see the band of the Milky Way arching over the ocean. With the closest source of light pollution in Newcastle, Anna Bay’s night sky is pretty dark.

I personally love Anna Bay in stormy weather. Because the bay has so much rocky coastline, you can spend hours chasing the storms as they morph from one spectacular cloudscape to another. And the rugged cliffside trails and rocky caves are at their best when the surf smashes into them kicking up fountains of angry foam.

But if you start missing the buzz of human society, just head to Birubi beach, have lunch at the Crest Cafe and try to spot whales and dolphins from your table, or take an adventure on the sand dunes. There are plenty of things to do in Anna Bay to keep you entertained for a few days.

Stockton Beach is epic even by Australian standards. It stretches for 32km from Newcastle to Anna Bay and gets as wide as 1km across in some areas. It is a world unto itself. There are ancient Aboriginal middens concealed underneath the dunes, some of which are 1200 years old; there are rusted-out hulls of wrecked ships hidden beneath the surf, and supersonic jet fighters screaming overhead, on training runs from the nearby Williamtown air force base.

The waters off Stockton Beach are also part of the Great White Shark nursery. So, it’s really not a great place to get shipwrecked.

Of course, the most popular feature of Stockton beach is the massive sand dunes. Lying on Worimi Conservation Lands, Anna Bay sand dunes are the largest mobile sand dunes in the Southern Hemisphere.

Each year, the dunes shift north by approximately 4 meters. They cover 4,200 hectares, and some of the dunes reach over 30 meters in height. There are a few ways to explore Ana Bay sand dunes with most tours departing from Buribi Beach.

One of the quirky and off-beat things to do in Anna Bay is a visit to the Tin City. Lost among the endless dunes, the 11 corrugated iron shacks of Tin City could be a set for a post-apocalyptic movie. In fact, they were. Parts of 1979’s Mad Max film were shot here.

The first couple of shacks were built here in the early 1900s. At the time, shipwrecks along Stockton beach were so frequent that these shacks were erected to store supplies for the stranded sailors. Those that survived the shipwreck and the Great White sharks!

Then during the Great Depression, homeless men moved in and built more shacks. In its heyday, Tin City had more than 30 shacks. Most of them were torn down during WWII when the entire area was fortified against potential attacks by the Japanese fleet. But the 11 shacks that remain in Tin City today are still semi-occupied – they are the last legal squatter settlement in Australia. Just imagine – no light, no running water, just sand and silence. That’s radical solitude.

How to get there: From Anna Bay, take Nelson Bay road towards Newcastle until you reach Boyces trail turn off. Follow Boyces trail to the start of the sand dunes and then walk to the shacks.

Alternatively, you can take the Tin City 4WD Tour with 4WD Tours R Us from Anna Bay. You could even take an Astrophotography tour to Tin City.

Drive on the beach in your own 4WD

If you have your own 4WD and a permit, you can access more than 22 kilometres of Stockton beach and over 350 hectares of dunes. The entire area is managed by the Worimi Conservation Lands and you will need to get a $33 permit  (buy it here) in order to enter the dunes in your 4WD. Australians love their beach driving and Port Stephen dunes and Stockton beach are one of the largest coastal driving areas in NSW.

There is a certain skill to driving on the beach, and if you are new to it, it’s best to read the rules on Worimi Conservation Lands website.

And if half a day’s adventure is not enough for you, you could combine Anna Bay sand dunes with Whale watching in Port Stephens for a full-day adventure from Anna Bay.

Camel safari is one of the most popular things to do in Anna Bay, but before you join the queue…. walk down to the beach and look a camel in the eye. Ask yourself whether you genuinely believe that he or she would enjoy the experience of carrying you across the sand dunes on his or her 76th trip of the day on a 35-degree day? Choose what you will, but recognise that it is a living, thinking and feeling being standing in front of you.

Anna Bay coastline is a medley of rugged cliffs and sandy beaches. You can easily reach the cliffs of Birubi Point from Port Stephens sand dunes by a 10-min walk across Birubi beach.

There are quite a few trails running along the cliffs of Anna Bay in Tomaree National Park. If you are surefooted enough, you can walk from cliff top to cliff top, but take care not to slip, there are no guard rails here. And of course, the beauty of it is that this coastal environment is absolutely wild. Most of the time, you will be the only person on the cliffs and you can scramble across the rocks to some of the most incredible perches above the thundering surf.

You can follow the coastline from Birubi Point to the start of Morna Point Walk at Iris More picnic area (8 Birubi Ln, Anna Bay). The return walk to Morna Point covers a spectacular portion of the Tomaree coastline and takes about 2 hours to complete.

Anna Bay coastline is a great area for spotting some of the wild inhabitants of the bay, especially the birds. Straw-necked ibises, Great cormorants, Sooty oystercatchers, and White-faced herons are quite common. Now and then a White-bellied sea eagle soars overhead, while Australian garnets dive for fish like winged arrows.

During humpback migrations, you’ll see whales almost from anywhere in Anna Bay. Dolphins are also never far away, although because they are smaller they may be harder to spot from the shore.

Being a coastal town, there’s no shortage of beaches in Anna Bay to laze away the day. There are family-friendly patrolled beaches, deserted wild beaches, rocky beaches and dog-friendly beaches. Here are some of the most popular beaches closest to Anna Bay.

The 1.3 km long One Mile Beach, also known as Anna Bay Beach, is the most popular beach in the area. It is patrolled by lifeguards during the summer months and it’s a great place for a swim, particularly at the southern end of the beach, near the picnic area and the kiosk. It is also popular with surfers and fishermen.

‘Next door’ to the One Mile Beach, Samurai Beach is the official nudist beach. So if you prefer to sunbathe ala-natural this is the spot for you.

Buribi Point Beach is the beach that runs from the end of Stockton beach to the cliffs of Buribi Point. It’s not the best beach for swimming, but it is a great beach for a walk. It is also a dog-friendly beach popular with local pooches.

Kingsley Beach is tucked away among the coastal cliffs near Boat Harbour. It can be reached by Kingsley Drive Fire trail and a short walk. This beach may appear sheltered, but it is south-facing and exposed to south swell which generated strong rips. So unless you are a superbly confident swimmer, it’s best not to wade too deep at Kingsley.

How to get to Anna Bay

You can also reach Anna Bay by public transport, although it will take a bit longer. Take a train from Central to Hamilton station (3 hrs) and then take the 130 bus that will take you to Anna Bay in about 50 minutes.

Where to Eat in Anna Bay

Where to stay in Anna Bay

The most stunning waterfront houses in Anna Bay are quite large (sleep between 6 and 7 guests), so they can be quite pricey unless you are travelling as a group. In that case, check out this stunning Ocean Cottage at Birubi or this Saltwater Curls Anna Bay Coastal Retreat

Wherever you decide to stay in Anna Bay, you will be a short stroll away from the beaches.