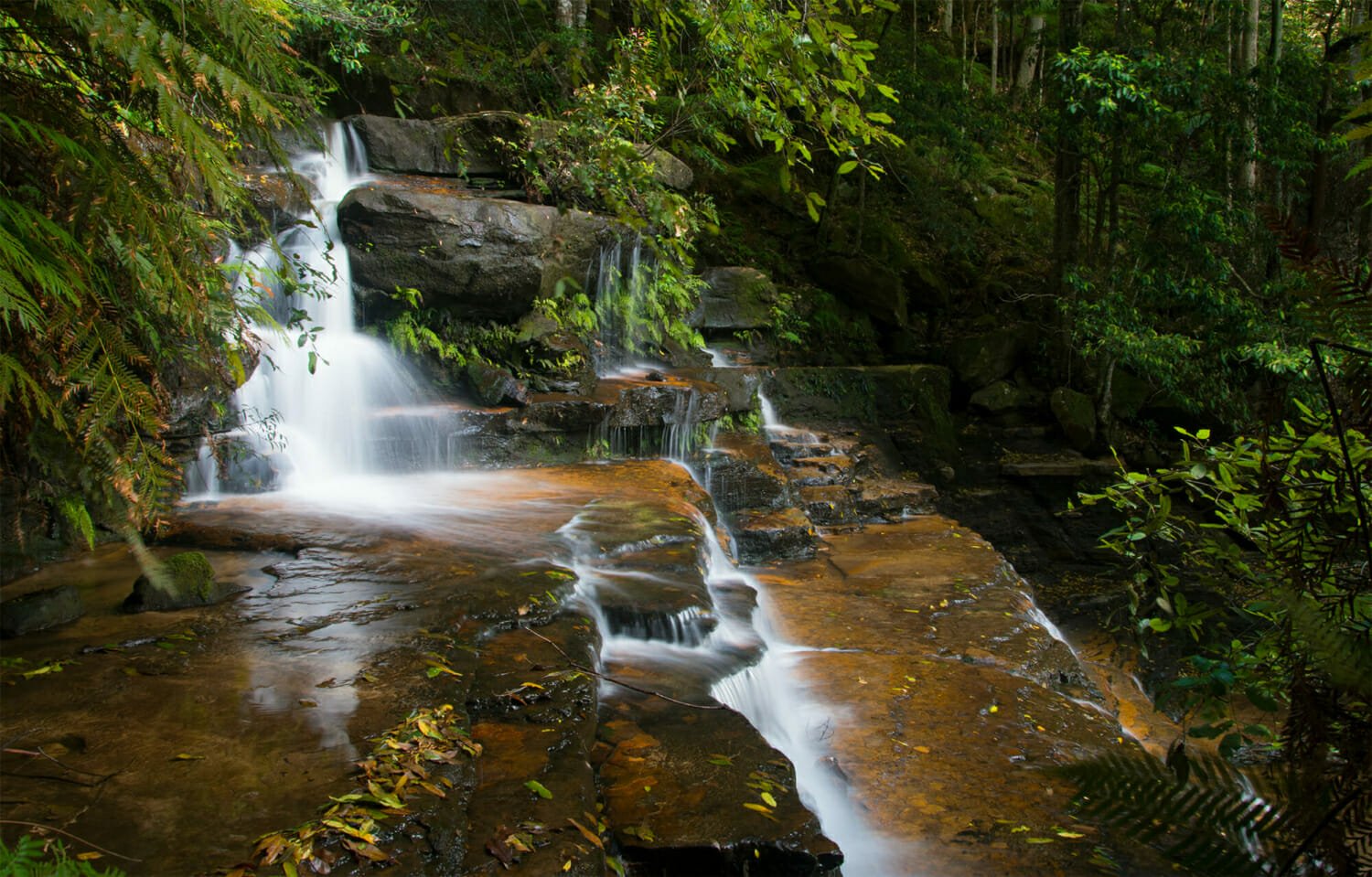 Balancing on the slippery stepping stones at the edge of a cliff, I was standing inches above the magnificent Wentworth Falls. Underneath my feet, gallons of water rushed off the top of the cliff and plummeted 180 meters to the bottom of the densely-forested valley. The only thing preventing me from following suit was a thin metal guardrail bolted into the rock. Sounds pretty spectacular for a start of a bushwalk, right? But believe me, it gets even better.

I stared at the vertical sandstone slabs of the monumental Kedumba Walls that rise out of the endless expanse of the Jamison Valley, and my mind that usually runs at a million miles an hour slowed down to a blissful calm in the face of such vastness.

The Blue Mountains National Park is all about vastness. Located only 2 hours by train or car from the centre of Sydney, this rugged World Heritage-listed wilderness is a 2,690 square kilometre-medley of mountains, gorges, canyons, caves, and waterfalls.

In this post hide
1. Start of Wenworth Pass Loop Track
2. Steep descent alongside Wentworth Falls
3. Down the Slack Stairs
4. Valley of the Waters Tracks
5. Empress Falls
6. Track stats
7. How to get to Wentworth Falls
8. More Scenic Hikes around Sydney

The dramatic clifftop is just the start of the 5.6-kilometre hike. Well, to be accurate, the walk starts at Wentworth Falls picnic area and follows the Wentworth Falls track. Before you reach the falls, there is a turn off for Fletchers Lookout. Take the minute to walk over to it for the view of the top of Wentworth Falls.

Once you get to the falls themselves, you get yet a different perspective again. Here you find the beautiful Queen’s cascades as Jamison Creek flows over sandstone ledges before it tumbles over the edge of the cliff as the magnificent Wentworth Falls.

From the top of the Falls, the trail dives into a steep descent via hundreds of roughly hewn stone steps cut into the side of the cliff alongside the waterfall. You will want to take it easy down the rough steps – they are too high to skip along and the 200-meter drop to your right will be the only reminder you’ll need to keep your eyes on the trail.

The descent continues alongside the thundering Wentworth Falls constantly giving you views of the solid wall of water tumbling down the exposed cliff face. At times you even feel the spray on your face. This part of the walk is quite a wild experience. Not to mention the incredible views of Jamison Valley that are always in front of your eyes.

As you clamber down the rocky stairwell one giant step at a time, imagine the hardships that the builders of this trail faced. The stairs are part of the National Pass track that first opened to the public in 1908. This was well before the days when helicopters would deposit pre-processed sandstone blocks along the trail.

These stairs were carved by a team of four men known as the “Irish Brigade” with nothing more than shovels, crowbars, and dynamite.  In comparison to such a feat of endurance, the effort of merely climbing down these steps begins to feel like a walk in the park. A Warrumbungles kind of a park.

When you finally reach the bottom of the stairs at the base of the first drop of the falls, you will be 110 meters below the start of the trail. Here the falls split into a myriad of smaller veils cascading over weathered sandstone shelves. It is a great spot to plonk yourself on a shaded rock among the fellow hikers enjoying their hard-earned reward for the arduous climb.

Down the Slack Stairs

Once you are ready to soldier on, follow the trail to the Wentworth Pass track that zig-zags over relatively flat grown with the backdrop of dramatic views of the falls and the Jamison Valley. These are the best views of Wentworth Falls you will ever get. Only from this stretch of the trail can you see the falls in their entirety, meaning both the upper and the lower falls. But the deeper you go, the rougher the trail becomes until it plunges into the steepest descent yet.

Known as the “Slack Stairs” this part of the trail is made up of a set of extremely steep steps and stairs encased into protective iron shoots. While perfectly safe, this stretch is not for the faint-hearted. Especially if, like me,  you are carrying a heavy tripod, and only have one free hand to lower yourself into the shoots that seem to be suspended in mid-air over hundreds of meters of empty space. Well, this may be a touch over-dramatic. The shoots are snuggled closely to the wall of the cliff so you don’t really feel like you are walking on air when climbing down these steps.

After the challenges of the Slack Stairs, the pool at the bottom of the second drop of the falls is a refreshing oasis of trickling water and cool air. I was tempted to take a dip in the pool, but as I thought about it, a large group of noisy hikers emerged from the trail, and the tranquillity was lost.

Valley of the Waters Tracks

I left the rowdy teenagers to their selfie sticks and followed the trail along the base of the cliffs through the open eucalypt forest. After about 1.5 kilometres I came to the first creek crossing. It looked like there used to be a bridge here, but it was long gone. The eucalypt trees gave way to the mossy rainforest with a closed canopy.

Tripod in hand, I scrambled over the huge boulders across the creek and climbed back onto the trail.  I was now in the Valley of the Waters – a waterfall wonderland with five falls packed into a relatively small area of dense forest.  It is a photographer’s dream, and the few people I met on the trail were all busy with their cameras and tripods. There was no noise, no crowds, just the sublime beauty and tranquillity of nature.

After a while, the trail started to ascend along the side of the cliff crossing the creek back and forth, and at every crossing, there was a new waterfall. Red Rock Falls, Britannia Falls, Flat Rock Falls, Lodore Falls, Edith Falls, Sylvia Falls, and Empress Falls followed in quick succession, as the creek ran down the side of the mountain.

Each waterfall was more picturesque than the last. This was by far the dreamiest landscape I have ever explored in the Blue Mountains. And it was all the more rewarding to be here for the arduous journey it took to get here.

Empress Falls is the most famous waterfall in the Valley of the Waters. Honestly, I am not sure why. It is the biggest of the series of waterfalls in the valley, but it is not the most picturesque.

It is very popular with canyoning tour groups that conclude the tour by abseiling down Empress Falls. So as you explore the waterfall, watch out for abseiling ropes flying from above.

Because of the abseiling tours, Empress Falls is also the busiest spot on the Valley of the Waters track. I had to wait for a group to depart before I could take a photo of the falls. Not that it was a problem with so many tiny streams to photograph around the falls.

As I wandered from waterfall to waterfall, I was slowly climbing out of the valley. The ascent became more arduous when I left Empress Falls behind since there were no more distractions taking my mind off the climb.

What followed was a long stretch of steps that eventually took me past the Empress and Queen Victoria lookouts towards the Conservation Hut Cafe. Of course, I spent too much time in the Valley of the Waters and the café was already shut. With a bit of planning, you should try to get to the cafe by 3 – 3.30 pm if you’d like a drink and a snack after the track.

Of course, you could also visit Valley of the Waters by a much shorter trail from the Conservation Hut (Fletcher St, Wentworth Falls). It is a reasonably steep track that would take an hour or so to complete.

After a brief rest and an encounter with a lyrebird, I headed along the Shortcut Trail that brought me back to the Wentworth Falls picnic area about 20 minutes later. By then I felt, and probably looked, like a battle survivor, but it was the kind of fatigue that I had been looking forward to.

By the way, If you enjoy chasing waterfalls as much as I do, check out this epic guide to the most remarkable waterfalls in Africa, Australia and New Zealand.

How to get to Wentworth Falls

By car: Coming from Sydney via Great Western Highway, turn left at Falls Road near Wentworth Falls and the picnic area is at the end of the street.

By train: Take the Blue Mountains line train to Wentworth Falls station. From the station, cross the Great Western Highway, turn left onto Falls Road and follow the road to the end.

18 thoughts on “Is Valley of the Waters the most beautiful walk in the Blue Mountains?”