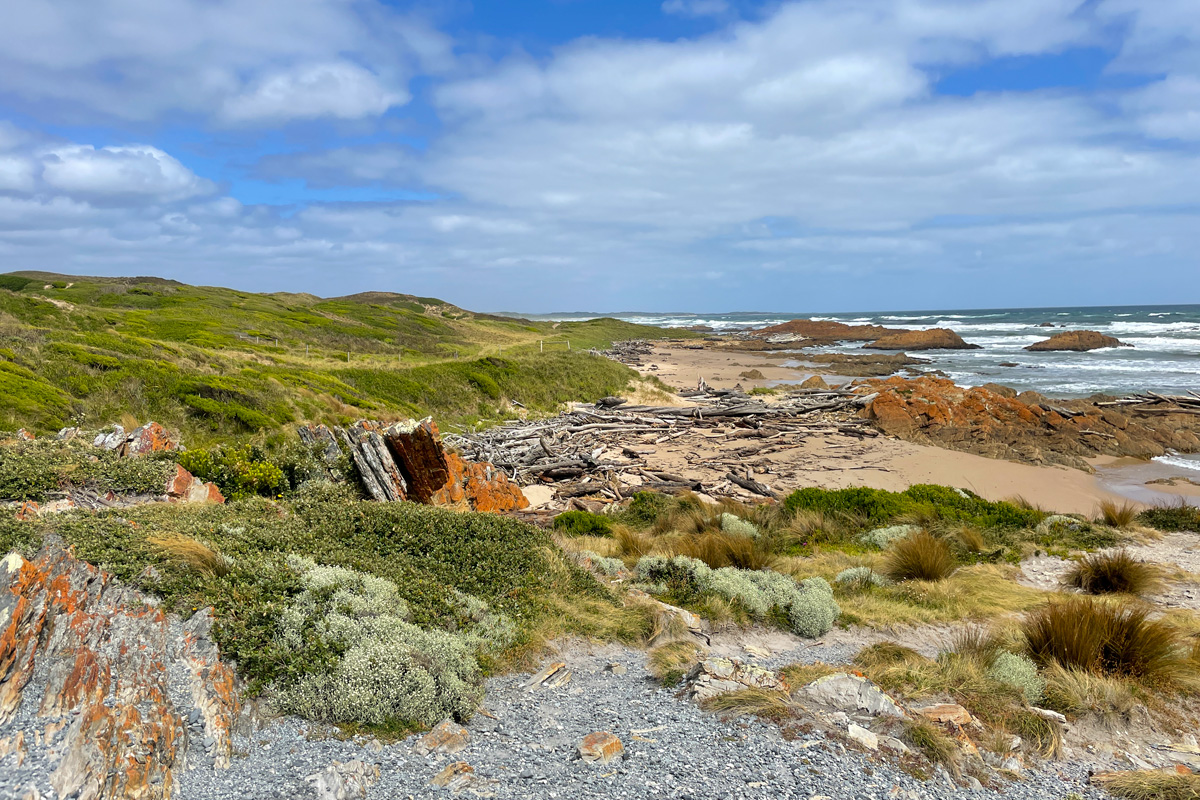 An island state of an island continent with nothing but Antarctica further south may already feel like the edge of the world, yet to reach the true Edge of the World in Tasmania, you’ll need to take a drive into the wild and rugged north west of the state where ancient rainforests of Tarkine Wilderness meet the turbulent currents of the Indian Ocean along the windswept Tarkine coast – Tasmania’s largest unprotected wilderness area.

Why is it called Edge of the World?

The term applies to the section of coastline around the mouth of Arthur River. It was coined by Brian Inder of Tasmazia fame who also penned the poem etched on a plaque at Gardiner Point that refers to the timelessness and wildness of the coastline at Arthur River that lies within the Arthur-Pieman Conservation Area.

While technically, this is not the westernmost point of Tasmania, it marks the longest continuous stretch of ocean in the world. According to the signage at the lookout, if you were to set sail from Edge of the World and head west you wouldn’t make landfall until you reached the coast of Argentina some 20,000 km away. So while this may not be literally the edge of the world, it certainly feels like it.

How to get to Edge of the World

For such a wild place, Edge of the World is quite easily accessible. It lies in the north west corner of Tasmania along the coastal section of the stunning Tarkine Drive, 84 km southwest of Stanley, 193 km from Devonport, 294 km from Launceston and right next door to the small fishing settlement of Arthur River.

A sealed road goes almost all the way to Gardiner Point where the Edge of the World lookout is located. For the last couple of kilometres, once you drive through the township of Arthur River, the road turns to gravel, but it’s a well-maintained road, perfectly suitable for 2WD vehicles with low clearance.

There is a spacious car park at the Edge of the World (ironic, right?) with good bathrooms. But that’s about it.

Experiencing Edge of the World in Tasmania

As soon as you step out of the car at Tasmania’s Edge of the World, you notice two things: the strikingly beautiful panorama of the wild coastline that stretches for over 180 degrees in front of you, and the blustering gusts of the Roaring Forties – Tasmania’s infamous band of strong winds at the latitude of 40 degrees that tear along the coast with unyielding ferocity. A visit to the Edge of the World is a multi-sensory experience.

Edge of the world Boardwalk

From the car park, a wooden boardwalk takes you towards the rocky Gardiner Point. On your right, you will see a lovely sheltered beach with huge piles of driftwood scattered around it. And I don’t mean small twigs. Massive bleached tree trunks have been thrown onto the beach by the churning surf and accumulated into large stacks over the years. The storms in this part of the world must be frighteningly powerful, like those battering the cliffs of the Tasman Peninsula.

Edge of the World Lookout

A couple of meters further the boardwalk splits in two: the left-hand side path takes you to a sheltered lookout that has panoramic 180-degree views of the coastline and some information boards that did not weather well and can barely be read.

In case you are curious but can’t make out the writing on the weathered signs, some of them talk about the North West Aboriginal People – the traditional custodians of the land at the Edge of the World and beyond. These hardy people have lived here for at least 35,000 years and were the southernmost people in the world at the time of the last Ice Age.

Other signs seem to be describing the wildlife present in the area. The grasslands and scrubland along the coast are home to Tasmanian pademelons, Bennetts wallabies, Wombats and Tasmanian devils.

The beaches you can see from the lookout are sensitive bird breeding areas for Hooded plovers, Red-capped plovers, and Pied and Sooty oystercatchers. But the birds you are most likely to encounter are the White-bellied sea eagles soaring on the thermal currents above the ocean.

Keen birdwatchers flock to this area in search of three rare bird species: ground parrots, hooded plovers, and the critically endangered orange-bellied parrots that come to Tasmania from the mainland to breed.

Edge of the World Plaque

The right-hand side path takes you to the rocky tip of Gardiner Point where a plaque with Brian Indee’s poem marks The Edge of the World.

“I cast my pebble onto the shore of Eternity.
To be washed by the Ocean of time. It has shape, form, and substance. It is me.
One day I will be no more. But my pebble will remain here.
On the shore of eternity.
Mute witness from the aeons.
That today I came and stood At the edge of the world.”

There are plenty of pebbles scattered at your feet here. So if you are feeling poetic, cast a pebble of your own – this is as unique a wishing well as you’ll ever visit.

The view from the tip of Gardiner Point is pretty wild. Powerful waves chase one another across the long reach of the ocean, crushing against weather-beaten rocks and wind-swept beaches strewn with driftwood. Everywhere you look you see traces of epic natural forces that continue to shape this striking landscape.

Yet against this background of harshness and turbulence, sandy beaches are inhabited by families of black swans that teach their offspring to swim in the surf and Pacific gulls looking for tasty morsels washed up to shore. It is a place of stark contrast, wild beauty, and thriving life.

Where to stay at the Edge of the World

The Edge of the World is an adventurer’s and photographer’s playground. If you are keen to explore the Tarkine coastline or have a photo session at sunset or sunrise, you may like to stay overnight at Arthur River. The accommodation options are few and far between, so you’ll need to book in advance. Check out the units at Sunset Holiday Villas, and a few different apartments at Arthur River Lodge: Upstream apartment, Downstream apartment, or Entire House.

There are also three serviced campsites: Manuka and Peppermint both have water on-site and are located close to the Parks and Wildlife Visitor Centre on Arthur River Road.  Prickly Wattle campsite can be found approximately 1 kilometre south of Arthur River, on Temma Road. For more details check Tasmania Parks and Wildlife Service website.

Where to eat at the Edge of the World

Arthur River community is very small and there are no shops or cafes in town. There is a small general store, right by the bridge, that sells some snacks and also offers takeaway. Apart from that, you’ll need to stock up on groceries and fuel in Smithton (63 km away) – there is a large Woolworths store in town. Alternatively, you can get a cooked meal at Marrawah Tavern (16 km away).

Final thoughts on visiting Edge of the World

Given its remote location, Edge of the World lookout is probably not one of the must-see Tasmanian attractions. But if you are visiting North West Tasmania, especially if you are touring the Tarkine Drive, make sure to add the Edge of the World to your itinerary. It is a striking location unlike any other.