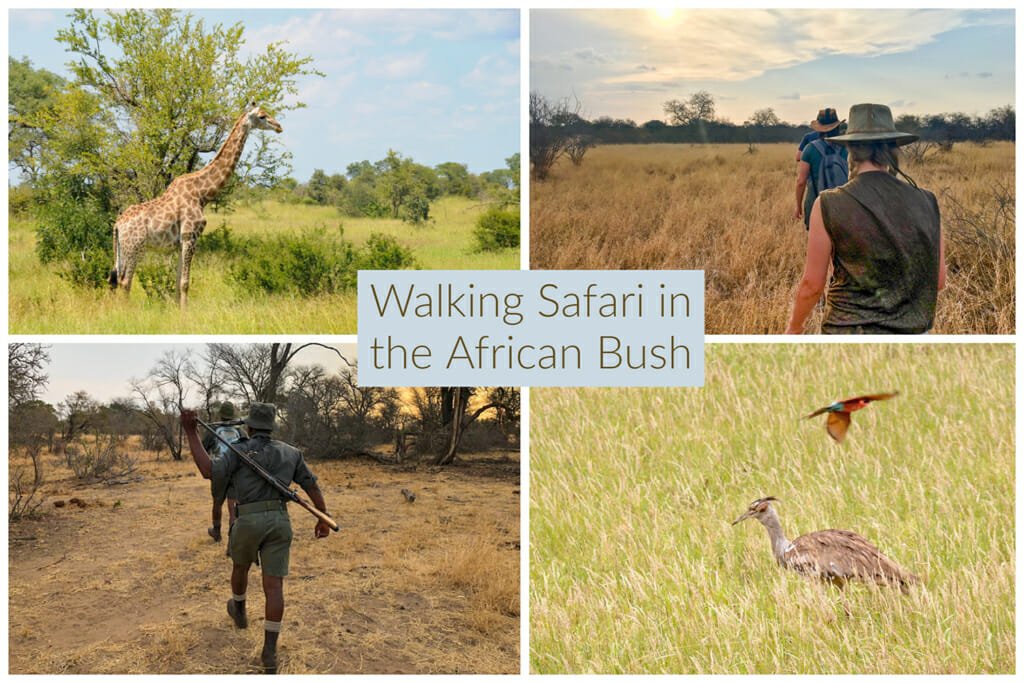 There are many different ways to experience the beauty of the African bush. Safaris are one of the most popular reasons that tourists love to visit South Africa. Typically, a safari involves exploring the bush by means of a vehicle. In some cases, your own vehicle, but often in a game vehicle accompanied by game rangers.

It’s a phenomenal experience and just about everyone falls in love with the African bush after their first safari. But, believe it or not, there’s an even more thrilling and exciting safari option. That is a walking safari in the African bush.

It may sound crazy, scary even, but walking African safaris are one of the best ways to really experience the nature of the bush. It’s about leaving the roads behind and exploring places off the beaten track. A walking safari is all about seeing without being seen, and in this way not altering the behavior of the encountered wildlife.

Last year we had the opportunity to do the Mathikithi trail which is one of the notorious Kruger Park walking trails. It’s a three-night guided bush walk and one of the most unique safari experiences possible. It was the best wildlife experience that we’ve ever had and one that we would do again in a heartbeat.

Why Explore the African Bush on Foot?

Hiking in the African bush allows you to move at the pace of nature. It’s about leaving the stress of urban life behind and really getting in tune with the bush. When you’re in a vehicle you miss all the small yet integral parts of bush life, like the smells, the sounds, the textures, and even the temperatures. Things that you don’t even think about when you’re driving around in an air-conned vehicle.

At the start of our 3-day guided trail, the best thing the rangers did was explain to us that it’s about so much more than spotting animals. Of course, most people are there to encounter wildlife. But they told us that we should appreciate experiencing all the small details that we miss when we are in a vehicle. Spotting animals was just a big bonus.

Walking in the bush enhances your knowledge and awareness of what’s going on around you in a way like nothing else can. It’s the most disconnected I’ve ever felt from the outside world, and it was wonderful. Expect to have all five senses engaged at a heightened level. The enticing smell of wild sage, the sound of birds chirping all around you, the stillness, and the thrilling sight of spotting game at eye level – it’s intoxicating.

The best part a walking safari is that this is one of the most natural ways to encounter wildlife. It’s all about experiencing and observing the animals in their natural habitat, undisturbed, and sometimes, if you’re lucky, up close and personal.

But, it’s not only about the anticipation of encountering wildlife, it’s also about hiking in the African bush in silence among the big trees and beautiful landscapes. It’s about exploring parts of nature that are virtually untouched by humans.

Our Experience of Hiking in the South African Bush

We spent three nights in the middle of the bush at the Mathikithi Fly Camp, which is a temporary camp that has been set up for this particular trail. The Kruger National Park offers nine different trails throughout the park. Each has something unique to offer guests, but they’re all about experiencing the beauty of the bush on foot.

While we appreciated all the small things, like the smells, the sounds, and the lessons we learned, we were delighted to have encountered plenty of wildlife. We saw so many elephants – which is probably one of the scariest animals to see. If they decide to charge, there’s very little you can do about it. But that’s highly unlikely and seeing them in their natural environment is so magical.

On our last night, the rangers took us to a dry riverbed for sundowners. As we sat and sipped on our drinks, we watched as an elephant came past to drink at the tiny little dam of water ahead of us. We all sat there in awe and complete silence. It’s something that I will never forget. I mean, it’s not every day that you get to experience that.

We also saw many kudu, impala, baboons, a few giraffe, and a crocodile. But, the highlight of our trip? It’s difficult to choose between the pride of lions and the leopard that we came across. It’s quite rare to have these kinds of sightings. Especially the leopard. They’re very shy and bolt as soon as they hear any noise. We got a glimpse of the leopard as it sprung down from a tree and bolted far into the horizon. It all happened very quickly, but it was a brilliant sighting.

We came very close to the pride of lions but only spotted them from a far distance. We had been tracking them by their spoor, and as the ranger saw them, he instructed us to run up the riverbed (quietly) to get a look from above. It was a pride of about 20 lioness and cubs, and as soon as the ranger realized how close we were, he knew that we had to get out of their territory. The rush of excitement that came over us in that moment was exhilarating.

It was an experience like none other. I had been to the Kruger Park many times before, but the walking trail was a once-in-a-lifetime experience. Although, I’m pretty sure we will be doing it again.

There are a few different safari trails to choose from if you like the idea of hiking in the African bush. It’s not only the overnight trails. If you don’t like the idea of sleeping out in the middle of the bush, then you can do day tours that are on offer at most of the main Kruger Park camps. These are typically sunrise, sunset, or afternoon trails. They’re usually about three hours long and have a guide take you out into the surrounding areas.

If you’re feeling up to it, you may want to do the full-day walking safari. For these trails, you will usually leave the camp very early (before breakfast) and only return late afternoon. Breakfast and lunch are then served in the bush as part of your trail. These are very similar to the 3-night trails, except that you return to the main camp after.

There’s also the possibility of getting out during a game drive. However, this isn’t always an option and it will be at the guide’s discretion. This is more likely to occur in a private game reserve and not one of the main Kruger park camps.

It might so happen that you are watching giraffe off in the distance, and the ranger decides that he wants you to get a closer look. If you can’t get closer by vehicle, he may decide to have everyone disembark, give a safety briefing, and then set off on foot to get a closer view. But there isn’t a high possibility of this happening, and if you really want to experience a walking safari in the African bush, you’re better off booking a trail.

The multi-day safari trails, like we did, also consist of a variety of different options. Ours included a fixed tented camp, which was used as our base. This is where we returned to each evening, had dinner, and slept. But there’s also the option of doing a bush hike with a mobile camp. During this type of trail, you will carry everything you need with you and set up camp in a different area each night.

Is Walking Safari in the African Bush Safe?

If you’ve ever been on a game drive then you’re probably familiar with the safety precautions that are given to guests before a safari. Everyone’s told to sit at all times, not hang any part of their body out the vehicle, and obviously, keep their voices low. So perhaps you’re wondering why on earth anybody would consider doing a bush walk instead?

Well, it’s not as dangerous and crazy as it sounds. Ok maybe a little, but if you follow instructions and don’t do anything outrageous, you should be perfectly fine. Most African bush hikes are done with highly-qualified rangers who are well-trained on the nature of the bush and know exactly what to expect and how to react. It’s their job to keep everyone safe (including the animals) and in our experience, that’s exactly what they do.

Of course, the bush is unpredictable and there have been incidents in the past. But, truthfully, the safety risks associated with hiking in the African bush are no higher than that of getting into a car accident. You can reduce the risk by being vigilant, listening to the rangers at all times, and really just having an awareness of where you are.

Who is a Walking Safari for?

Walking safaris are for anyone and everyone who appreciates nature and is looking to encounter wildlife in their natural habitat. It’s for nature lovers, bush enthusiasts, and adventure seekers. If you’ve done a game drive before and fallen in love with the African bush, then you don’t want to miss the chance to take part in a walking safari.

Another hiking trail worth looking into in South Africa is the Robberg Hike. It’s a completely different kind of hike – along the coast – and on the other side of the country, in the Garden Route. But it’s absolutely stunning.

Hayley Jones is the creative mind behind My Blissness travel blog. Check it out and follow Hayley on her adventures to where the wild things are. You can also connect with Hayley on Facebook or Instagram.

4 thoughts on “Walking Safari in the African Bush”