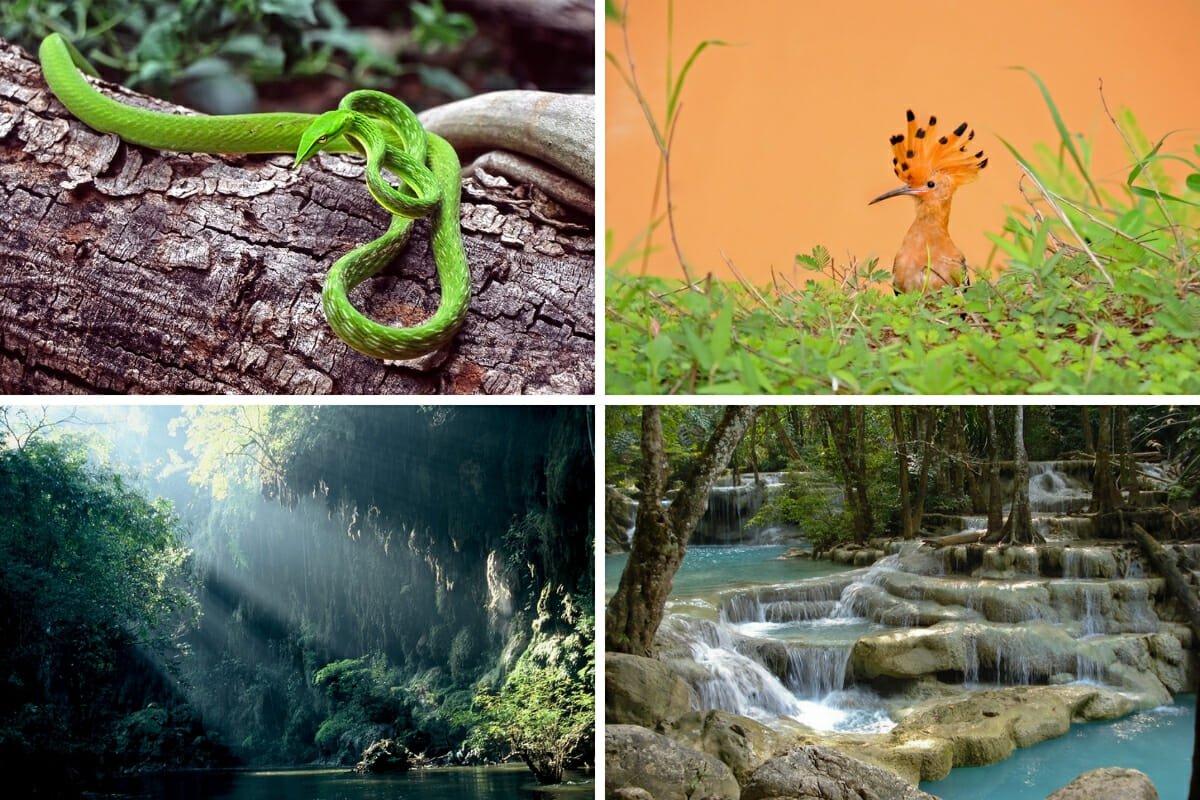 Some WFC’s sanctuaries are not easily accessible and require special permits to visit. Others are open to the public and draw high numbers of visitors.

I spent a few years living in rural Kanchanaburi and over time I visited some of the sanctuaries, including Sri Nakarin, Umphang, Phu Toei, Sai Yok and Erawan.

The visit to Phu Toei wasn’t a wildlife viewing expedition, but more of a pilgrim journey.  At the time, I was living in a Buddhist monastery in rural Kanchanaburi and our Abbot oversaw another small forest monastery deep in the jungles of Western Thailand, near the village of Phu Toey, inside the Phu Toey Sanctuary. I came along for a visit during one of the religious holidays.

The road to the monastery cut through the sanctuary and the local driver reminisced how he once saw a tiger on that road. And while the tigers have retreated from the populated areas in recent years, the dense jungle that dominates the sanctuary was still very much there.

Truly off the beaten track, Phu Toei can only be reached by car. The closest city to the National Park is Suphanburi. You can rent tents and sleeping bags at the visitor centre.

Erawan waterfall is considered to be one of Thailand’s most beautiful waterfalls. The water cascades through the primeval jungle, over seven tiers of the falls, past turquoise-coloured shallow pools on its way to the famous River Khwae (Mae Num Khwae Yai). It is those milky-turquoise pools, at the lower tier of the falls, that Erawan owes its fame to.

The park is easily accessible from Kanchanaburi town and is a sight not to be missed. The seven tiers of the waterfall take a couple of hours to explore and you can swim in the pools to cool off after the climb to the top.

The waterfall is stunning. The calcite brought by the water from the surrounding limestone caves gives the water a milky blue color, turning the waterfall into fairytale-like scenery.

In terms of wildlife, I only ever seen the common species of the region. Variable and Grey-bellied squirrels and Northern tree shrews are common along the trails.

Late in the evening, I saw the endangered Kitti’s hog-nosed bats fluttering over the open areas. Also known as Bumblebee bats, they are the smallest bats and arguably the smallest mammals in the world. These tiny creatures are known only from the very narrow habitat range – the limestone caves along the Thai/Burmese border.

Reptiles are quite abundant in the park. The Common green tree snakes Green whip-snakes, Rat snakes, Monocellate cobras, Crested garden lizards, Long-tail skins and Forest crested lizards are all relatively easy to spot. The best time to see snakes is early in the morning before the trails get busy with visitors.

There are a few caves in the park, worth exploring: Phartat Cave and Mi Cave that was originally occupied by a bear (Mi is bear in Thai)

You can reach Erawan by car or public bus from Kanchanaburi. The last bus back to Kanchanaburi is around 4 pm. Bikes and pick-up trucks can be hired for transfers within the park. There are some bungalows at the visitor centre and a campsite.

I lived in the close vicinity of Sai Yok Yai national park for a number of years, though I only managed to visit the park once. I spotted the usual birds, a Northern tree-shrew and a spooked Lesser bamboo rat that shouldn’t have been out of its burrow during the day.

There were lots of butterflies in the park when I visited, mainly congregating around the creeks and puddles.

The trails in the park are a good opportunity to get away from the mainly local Thai crowds and to spot some birds and reptiles.

The Sai Yok Yai waterfall is not as big as Huai Nakamin or as majestic as Erawan, but it presents a nice view as the water cascades into the river below.

There are two caves to explore in the park: Dao Daung Cave and Lawa Cave. They are good for checking out stalactites and roosting bats.

Sai Yok can be reached by car from Kanchanaburi or by a combination of bus and motorbike-taxi (or a 5 km walk) from the turn-off on the highway. The last bus to Kanchanaburi passes the turn-off at around 3.30pm.

There are bungalows at the visitor center as well as a campsite.

I spent three days in the remote Umphang Sanctuary. My friend was visiting me from Australia and I wanted to show her Thailand not typically seen by tourists. So we signed up for a trip to the mountains.

The first day we spent rafting down the Mae Klong river that runs through the entire sanctuary.  It was quite a tranquil experience floating down the river past the pristine jungle covering the banks and 400 meter-high limestone cliffs sipping with water.

The river is a good spot to see some wildlife. We saw some distant gibbons, Long-tailed macaques, Variable squirrels and even a pair of young Ground squirrels chasing each other in the branches of a riverside bush.

Birds were difficult to spot in the thick canopy, but we spotted a few White-throated kingfishers, a Blue-eared kingfisher a few Green bee-eaters and a Sprangled Drongo.

We camped at a forest campsite and while everyone lingered at the fireside dinner, I went to see what critters were out and about. There were quite a few microbats darting among the treetops, tiny little Bumblebee bats among them. But the most abundant living things were the moths! Moths in Thailand are the opposite to boring, they come in all sorts of sizes and colors.

We spent most of the next day hiking up to the famous Tilawsu waterfall. This waterfall is the biggest in Thailand (measuring an estimated 400 meters high and up to 300 meters wide) and definitely one of the most beautiful. In full flow after the rainy season, the waterfall looked like a backdrop from the Lord of the Rings movies.

From the waterfall, we hiked to a small Karen village where we spent the night. It would have been nice to do some bird watching on the hike, but the terrain was so rugged that I had to keep my eyes (and at times my hands and knees) on the trail.

The third day’s main event was elephant riding through the forest to the road where the cars were waiting to pick us up for the ride back to Um Phang.

You can visit Um Phang on a tour as we did, or you could visit it independently during the dry season. It is 37 km from the Um Phang town to the headquarters, mostly on a dirt track. You will need a 4WD for this drive. There is a campsite at the park’s headquarters.

The main attractions at Sri Nakarin National Park are the Sri Nakarin dam and the Huai Mae Khamin waterfall. The waterfall is quite difficult to reach, as the last 42 km of the road from Erawan is a badly eroded dirt track, and there is no public transport to the falls. So getting there is actually part of the adventure.

Update: The road has been recently paved and the waterfall can now be easily reached by a 2WD.

Sri Nakarin is the largest National Park in the west of Thailand. Its area of 1,532 square kilometres is mostly dense forest surrounding the Sri Nakarin Dam. The park is bisected by the River Khwae (Khwae Yai), which is at full flow all year round, which in turn means that the waterfall never dries out.

The Huai Mae Khamin Waterfall flows along the Mae Khamin Creek and cascades Over 7 limestone terraces.  The top level is the most impressive with thousands of gallons of water rushing off a steep cliff.

The only wildlife we spotted on this trip was a Whip green snake, a dead Rat snake on the road, Garden fence lizard, some common birds and lots of butterflies!

There are also two caves to check out in Sri Nakarin: Phra Cave that used to be a hiding place for Thai soldier during the Thai-Burmese wars in the 18th century and a smaller Neramit Cave.

On the way back we opted for a change of scenery and took two ferry rides to Sisawat instead of the dirt track. This is a great way to see the Sri Nakarin Dam. It is an immense body of water surrounded by rolling limestone hills covered in lush green jungle.

By the time we reached the second ferry crossing the rain clouds closed in above, giving the surrounding landscape a slightly menacing feel.

The only way to reach Sri Nakarin is by car or by scooter from Kanchanaburi. There are bungalows, terrace houses and houseboats available at the park headquarters near Huai Mae Kamin waterfall.

Map of the Western Forest Complex in Thailand