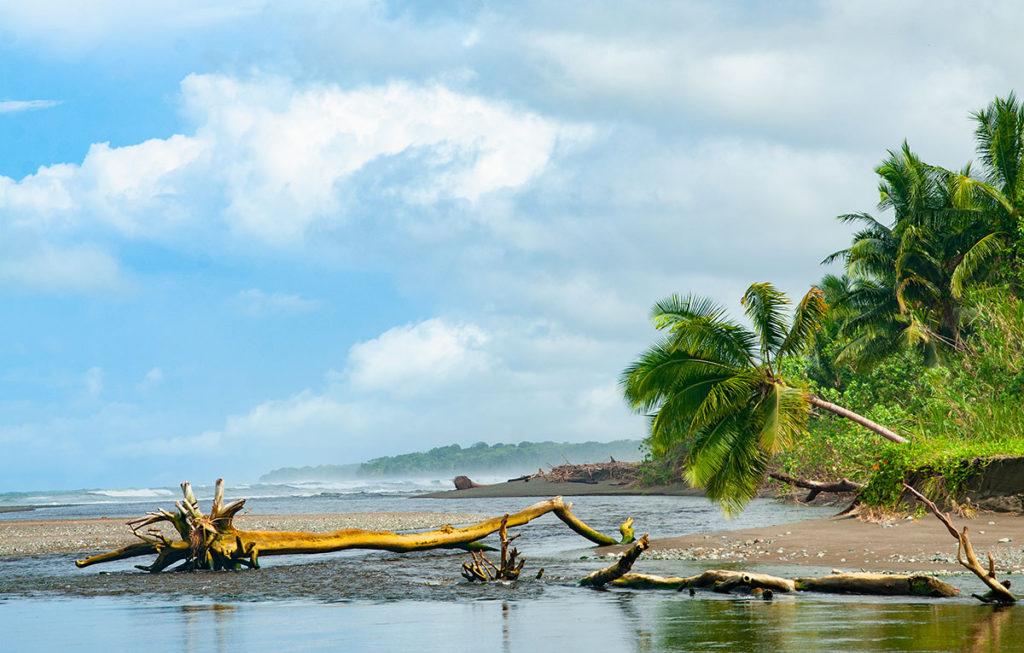 After spending a day in the tranquil town of Drake Bay we had an early start the following morning to meet our guide Bolivar from Surcos tours who was taking us on a three-day wildlife watching adventure in the remote Corcovado National Park. The was going to be the wildest adventure of our Costa Rica trip.

When we arrived at the meeting point at the tourist office, we were greeted with the much-appreciated flavoursome Costa Rican coffee. As we sipped the hot brew, the sky slowly began to lighten and soon a pickup truck came rattling down the road to take us for a short drive to the boat landing.

When most of us think about a boat landing site, we imagine a pier or a jetty, but here on the Osa Peninsula the surf is too high for the boats to dock and the only way to get in and out of them is by a beach landing. It sounds like a bit of adventurous fun. That is until you actually attempt to jump onto a constantly moving boat with all your luggage in the surf that rises up to your waist.

We did, of course, have some help. The well-practiced locals moved with military-like calm efficiency as they passed our bags to the boat crew, who deposited them in strategic places on the boat. When it came to loading tourists, however, it turned into a slightly less graceful process.

There were two main challenges involved: approaching the boat without getting hit by it as it was tossed towards the shore by the waves; and jumping onto the boat while it was at the lowest point of the wave and not tumbling down the rows of seats, as the boat was sharply lifted by the next wave.

There were about 12 of us trying to climb onboard and I imagine we provided some welcome comic relief to the residents of Drake Bay who were just starting to emerge from their homes to attend to early morning chores.

In the end, it was a much more graceful exercise than my previous experience with zodiac landing and we got away with a couple of scraped knees and stubbed toes and somewhat injured dignity. Amazingly, the small boat fit all of us in, as well as the crew, though it was a tight fit.

The boat ride from Drake Bay to Corcovado

Having successfully climbed onboard, I naively imagined that once we moved away from the shore, the ride would become a lot smoother. But I couldn’t have been more wrong. The captain fired up the engine and the boat burst forward climbing the crests of the waves and then dropping into the troughs with jarring thumps that jolted me out of my seat and pushed the air out of my lungs.

There wasn’t much to be done about our discomfort, however. We were now committed to two and a half hours of the bumpy ride. To take my mind off my rattling teeth and sore bum, I looked to the surrounding scenery for distraction.

We followed the coastline of the Peninsula that rose out of the ocean in undulating slopes, wrapped in a thick carpet of lush tropical rainforest. Most of the peninsula is protected by Corcovado National Park and the sheer expanse of its wilderness was staggering.

Just as I started to desensitize to the bone-rattling tossing of the boat, about 2 hours into the ride, I sensed the mood around me change. With a sense of foreboding, I followed the nervous gazes of people around me and saw a dark mount of jagged rocks menacingly protruding from the sandbar ahead. The water churned around the rocks betraying the strong pull of the current.

Should we be worried?

A couple of locals, who were hitching a ride on the boat, started yelling words of encouragement to the captain. Bolivar turned to us with a goofy grin: “Don’t worry, he is a good captain”. I didn’t even know we were supposed to worry! Until now.  Pete gave me and Ruth a reassuring smile that looked like he was trying to convince himself more than anyone else.

Meanwhile, the waves grew even larger and the tension in the boat reached its peak, as we came level with the rocks. In order to keep meeting the waves head-on, the captain had to steer the boat directly towards the sandbar, which meant he was risking getting caught in the powerful current that pulled towards the rocks.

He revved the engine and the boat started climbing a wave so high, it blocked the rocks out of view completely. Someone screamed, while most of us held our collective breath and held on to whatever we could with white-knuckled grips.

When the boat finally reached the crest of the wave, the captain skilfully turned it around and sent it down in free fall. An agonizing second later it slammed on the surface and immediately started climbing another wave that effortlessly carried us away from the treacherous rocks.

Passengers on a plane often like to give a round of applause to the pilot on successful touchdown. I frankly find the notion quite ridiculous. I would have thought that at this point in the evolution of commercial aviation a safe landing is included in the price of a ticket.

But having avoided a potential shipwreck in this little rackety tub of a boat, I clapped for the captain with the rest of the passengers, and I meant it from the bottom of my heart. I would’ve given him a hug if it didn’t involve running the risk of being tossed out of the boat by a rogue wave.

Once we cleared the rocks the captain steered the boat towards the shore and soon we arrived at the beach that serves as the entry point to Sirena Ranger Station. The beach landing didn’t seem to worry any of us this time.

The three of us waded out onto the beach and found a log to sit on while we waited for the boat to be unloaded. As I watched hundreds of Hermit crabs scatter away from underneath our log, I took a moment to appreciate the fact that we were finally in Corcovado.